Subdued spending in second half
Business

Subdued spending in second half

Most industry chiefs believe private consumption in the second half is expected to remain flat, limited by pressure from high energy prices and the prolonged pandemic.

The Federation of Thai Industries (FTI) expects investment and consumption to hit a downward slope in the second half of this year, following a short-term increase in May.

Kriengkrai Thiennukul, chairman of the FTI, attributed the sluggish outlook to the prolonged Russia-Ukraine war, which is pressuring global oil prices, concern over new Covid subvariant outbreaks and the US Federal Reserve's decision to significantly increase its benchmark interest rate.

"Many factors are affecting the economic growth and confidence of the business sector," he said.

The FTI is also worried Covid-19 will keep causing China to resort to lockdown measures under its zero-Covid policy to contain the spread of the highly transmissible virus. This would impact global supply chains as China is known as the factory of the world.

The Thai economy is mainly driven by exports, which are mostly products from the manufacturing sector.

The Joint Standing Committee on Commerce, Industry and Banking (JSCCIB) expects exports in 2022 to expand by 5-7%, an increase from a range of 3-5% in its previous forecast.

Whether the economy will continue its revival will be determined by inflation, which is expected to stand at 5-7%, up from 3.5-5.5%, according to the JSCCIB.

Manufacturers are struggling to deal with increasing production costs. Most of them said production costs increased by 20%, but they managed to raise prices by less than 10% in a bid to maintain sales volume, according to the latest poll by the FTI.

WAITING FOR A REBOUND

Marisa Sukosol Nunbhakdi, president of the Thai Hotels Association, said the economic downturn certainly dented tourists' purchasing power, but there will be pent-up demand from "revenge travel" to support the flow of arrivals.

"If recession in long-haul markets worsens during the high season, there is still room for tourism growth from the short-haul market as travel rules might be further relaxed," Mrs Marisa said.

While some countries are still imposing restrictions, robust summer travel in Europe is a positive sign a similar trend could happen in Asia, she said.

Hoteliers have to remain cautious and roll out cost control measures to avoid economic uncertainties during this time, said Mrs Marisa.

To attract local tourists with high spending power, she said higher airfares and a lack of flights might help slow their trips abroad, persuading them to travel domestically. 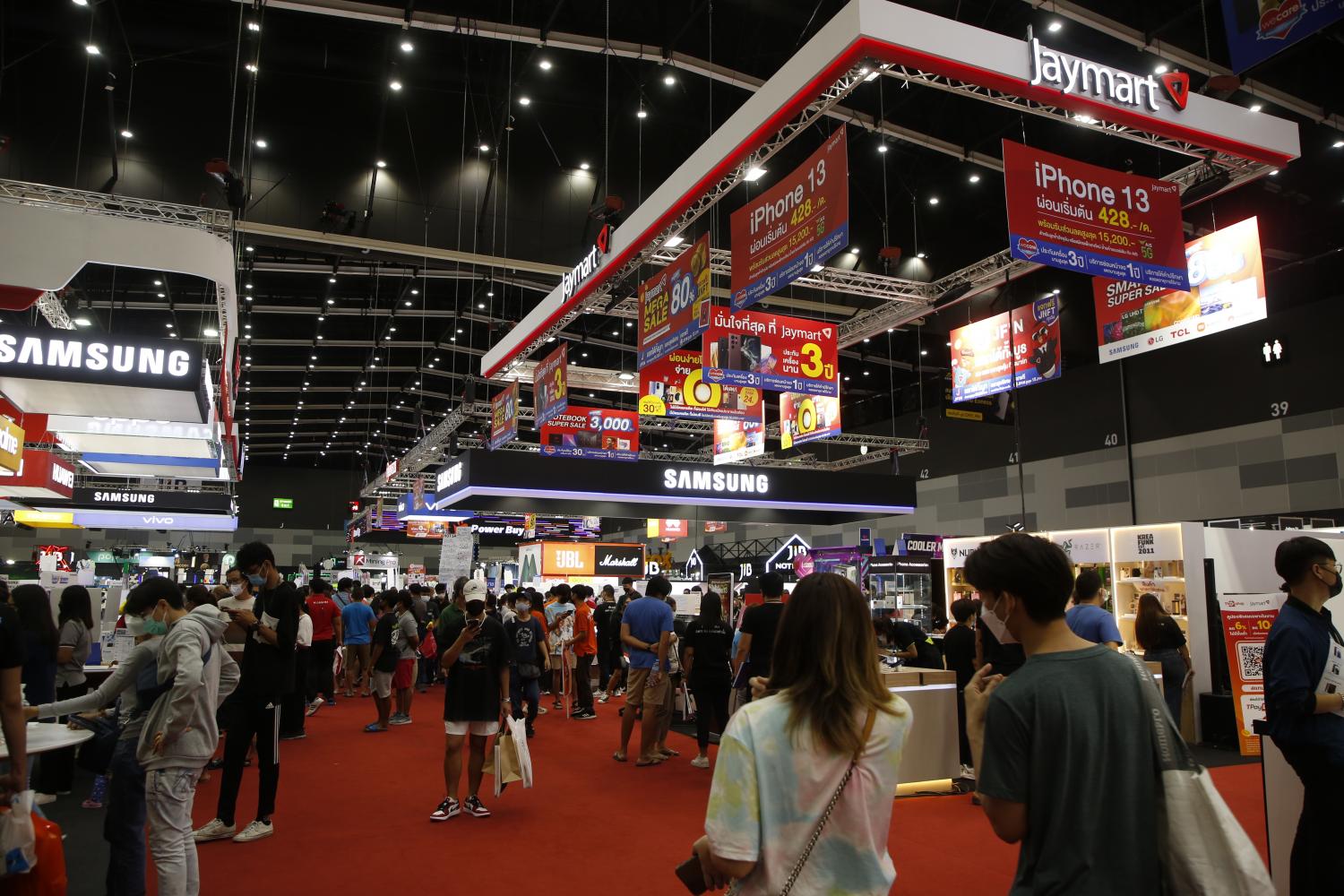 The atmosphere at this year's Mobile Expo. The IT product market in Thailand has been affected by rising inflation and dwindling consumer purchasing power. (Photo: Arnun Chonmahatrakool)

However, Mrs Marisa said tourism campaigns to spur domestic trips are needed, particularly a mechanism to introduce new destinations in secondary provinces or to promote the North during the cool season to keep more Thais on home turf, instead of venturing abroad.

Chaiyapruk Thongkam, president of the Association of Domestic Travel, said purchasing power in the domestic market has been affected by the economic slowdown.

However, Mr Chaiyapruk said Thais always want to travel and will continue to take at least 1-2 trips a month, perhaps opting for nearby destinations to control the budget.

He said domestic tourism operators need to attract high spenders by offering services such as spiritual tourism for the elderly who want premium treatment from tour services.

Amonthep Chawla, head of research and wealth advisory at CIMB Thai Bank (CIMBT), said private consumption in the second half is expected to continue recovering based on the country's reopening, resulting in spending by both international and local travellers as well as other renewed economic activities.

The rebounding export sector should increase income and purchasing power for those in related manufacturing sectors, he said.

However, the private consumption recovery will be milder as accelerating inflation will dampen the spending mood, while the economic rebound has been limited to the tourism and export sectors, said Mr Amonthep.

Although farmers' incomes have increased, production costs for fertiliser have accelerated, which could affect the sector's real net profit.

All these factors could soften the purchasing power of low-income earners, while rising household debt continues to pressure consumption, he said.

This indicates private consumption will be mainly driven by those in the middle- and high-income segments, Mr Amonthep said.

Price pressures will persist into the third quarter, the Commerce Ministry said after headline inflation hit an almost 14-year high in June.

The Trade Policy and Strategy Office reported headline inflation, gauged by the consumer price index, rose 7.66% year-on-year from June 2021, accelerating from 7.1% in May and 4.7% in April.

A source at the Finance Ministry who requested anonymity said real private consumption this year has continued to improve and could expand 4.3% year-on-year compared with 0.3% growth in 2021 and contraction of 1% in 2020.

Private consumption is expected to expand 4.7% in the second half, driven by revenue from the service sector following the country's reopening.

The source said improving consumption would also be supported by the higher net income of farmers, especially sugar cane, palm and corn farmers, in line with the rising global prices of these produces.

According to the Bank of Thailand, the economy has continued to rebound, reflected by better signals from economic data in May despite a sharp spike in the inflation rate.

The economy in May improved from the previous month, with indicators of private consumption and private investment increasing in line with an uptick in economic activities.

Private consumption in May after seasonal adjustment rose by 0.6% from the previous month in most spending categories.

This improvement reflected waning concerns over the Omicron outbreak, which led to positive development in various economic activities, said the bank.

Yet consumer confidence continued to decline, a sign of concern over rising living costs.

According to the Fiscal Policy Office, sales of passenger vehicles and motorcycles rebounded in May, reflecting recovering domestic spending.

Voralak Tulaporn, senior vice-president for marketing at The Mall Group Co, said shoppers' sentiment has improved, as gauged by customer traffic at all of The Mall's retail complexes, which have almost returned to pre-crisis levels.

Yet the average ticket size, a gauge that measures the number of sales per customer, dropped by 10% during June and July because people are growing concerned about high inflation and hefty oil prices, she said.

She urged the government to cash in on the baht's weakness by speeding up tourism promotions to raise income for the country.

The IT product market in Thailand has also taken a hit because of rising inflation and dwindling consumer purchasing power.

Takon Niyomthai, head of IT business development at Com7, a SET-listed IT retail chain, said IT products rolled out by Asian tech firms in June and July saw prices surge 10-20% because of a shortage of components, including processors and displays, as well as the weaker baht.

"We use currency hedging quarter-by-quarter with computer makers to ward off the rising costs," Mr Takon said.

In the second quarter, demand for IT products sharply declined with a double-digit fall in purchases, compared with the same period last year, caused by the economic slump and rising inflation, he said.

He said computer makers and dealers need to select models with high sales volume to sell rather than importing many models to minimise risk of excess inventory and being forced to cut prices.

The high-end computer segment with prices of at least 50,000 baht has seen the less impact from the economic slump as gamers still want to upgrade their devices, he said.

"Under these economic circumstances, entry-level computers costing 15,000-18,000 baht are gaining popularity, which is expected to represent over half of the market share, compared with 10-20% during the pandemic, when there was a supply shortage," said Mr Takon.

This year the IT market is expected to see growth of 0-5%, he said.