All the world's a stage
Life
Arts & Entertainment

All the world's a stage

In rehearsal, I'm given the role of a leading character in the play – a 30-something, Europe-educated lecturer caught up in the corruption of Thailand's higher education system. The rehearsal, run by the Makhampom Theatre Group, is less a practice to prepare for a performance than an experimental workshop -- a unique exercise in empathy and community.

The collective is focused on social justice issues in Chiang Mai province's Chiang Dao district and uses theatre to facilitate an understanding of the plight of marginalised people.

Today, it's brought together 30 participants from a range of backgrounds -- doctors, lecturers, writers, historians and village leaders. 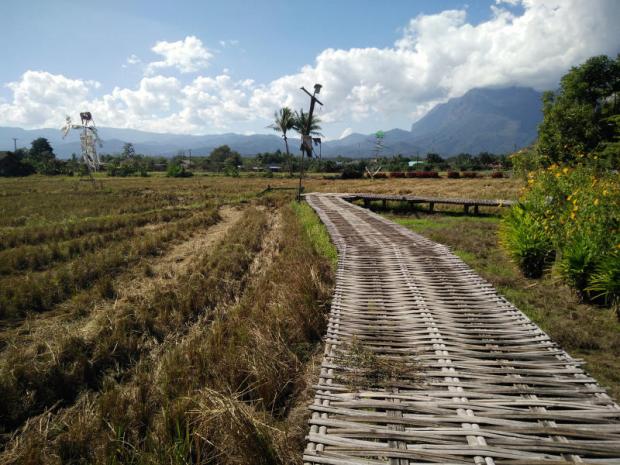 Road to somewhere: The Makhampom Art space is a learning centre focused on creativity and collaboration. It's surrounded by the rice fields and mountains of Chiang Mai province. Paritta Wangkiat

At first, I doubted the benefits of this experiment in storytelling and role play.

I also suspected the plot would bore audiences with its lack of relevance to everyday life.

With no experience in theatre myself, performing a character of a different background than me wasn't easy. But I dove into the scene anyway.

The play begins with a state university staff meeting. The characters, seated around a table, are talking about how they can recruit more students for the upcoming semester. 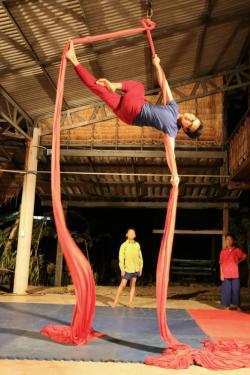 I play Mekhala, a young and eager lecturer attending the meeting.

We have no script but we've been instructed to follow a basic plot.

"This year, our course has very few students," one of the actors states. "We need to find at least 15 'customers' for the next year. If we can't hit that target, our course will be cancelled."

I, Mekhala, react by looking shocked. The use of the word "customers" to describe the students strikes her as unsettling.

Another character, a nearly retired lecturer, suggests that they start seeking out applicants from different faculties and programmes to apply.

"They just want certifications to upgrade their status anyway," he says.

Hearing the senior lecturers discuss has Mekhala feeling depressed. After the scene ends, she returns to her office. She begins speaking out loud about her many years of studying abroad, working hard to realise her dream of becoming an academic. She looks wistfully at her framed PhD certificate.

Mekhala has always wanted to make a meaningful contribution to society. She used to see teaching as an ideal way to improve and the world and the lives of young people.

But the reality of academia isn't as promising as she imagined. Around her, she sees proof of how the system has grown more focused on making money than it is with developing and nurturing young minds. The power and politics of academics deter her, and the payment for the job is quite low. 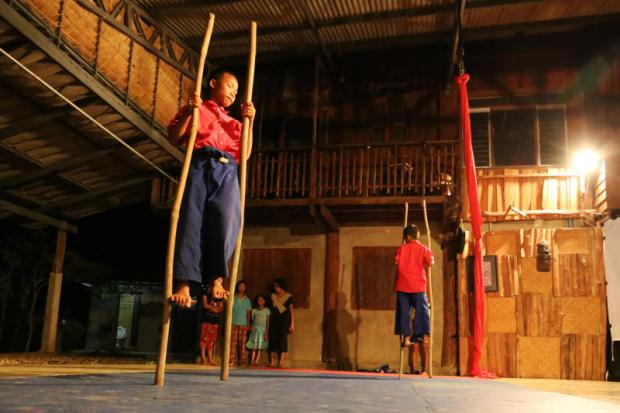 Step-up in learning: Dala-Aug children walk on stilts while their friends cheer them on during their acrobatic performance, above and left. Pariita Wangkiat

Her life outside the university offers little relief. She needs to gather enough money to pay for a tetanus vaccine and a wound to be stitched up. At home, her husband glares at her lit-up laptop while she's working at night. 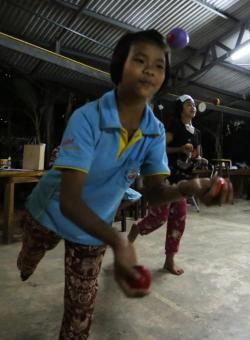 She reflects on her childhood when her teacher asked her what she wanted to be when she grew up. "A teacher," she recalls answering with confidence.

Her reminiscing gives her hope. She realises she has to stay on in the system in order to change it.

When the play ends, the audience, my fellow workshop participants, give a round of applause.

I later learned that we had performed a true story.

The script was written by a real-life lecturer, a fellow actress in the play. She tells us she couldn't have told her story if it weren't for Makhampom having given her a stage to express it.

"Theatre is a powerful tool that gives a voice to the voiceless," said Paluehad Paholkulbutr, secretary-general of the theatre group. "Many people don't have the space to speak out, but [voicing stories through a play] offers this opportunity."

The plays that Makhampom perform are chosen for both their educational and entertainment value.

The troupe was founded in 1981 following the military government's violent crackdown in the 1970s. The group -- a collective of actors, writers and students -- formed to spotlight the stories of voiceless people whose concerns were being overlooked or outright banned from being verbalised.

In the spotlight: Audiences watch Dala-Aug children perform traditional dance at Makhampom Theatre in Chiang Dao. The performances allow them to generate income for their communities. Paritta Wangkiat

The theatre now has two offices in Bangkok and Chiang Dao that offer theatre-learning workshops. The group is in high demand among local schools, with its leadership and reading programmes as well.

Makhampom has produced many plays, covering topics like social marginalisation and environmentalism, and using forms like puppet shows.

For Mr Paluehad, the most important part of theatre production is not the show but the process of creating a play. It breaks down social barriers, be they class or age, by focusing on collaboration.

In rehearsal, for example, I saw one participant, a senior, bowing in front of a junior actor -- a sight you would rarely see in hierarchy-based Thai society.

Those of higher social status made silly faces and poses. Minorities could take on leading roles.

After playing a PhD lecturer, I began to understand the pressure faced by academics and the ugly truth about the education system.

Another group in our workshop performed a true story about the violence in the deep South. But the play had an alternative take on the leading perception of the deep South, showing how Buddhist and Muslim villagers could live together and get along.

Over the years, Mr Paluehad has witnessed the power of theatre to create a catharsis in both actors and viewers. He recalls the case of one workshop participant, a woman from an ethnic minority in the North, who made a play about her stateless status. She felt like she didn't belong to the only land she had ever lived in.

Mr Paluehad describes how the play helped her summon the courage to tell people about her life story. She allowed herself to be seen and understood as a human being.

"The play allows people's hearts to meet," Mr Paluehad said. "It offers room for people from the bottom of society to stand up and be heard." 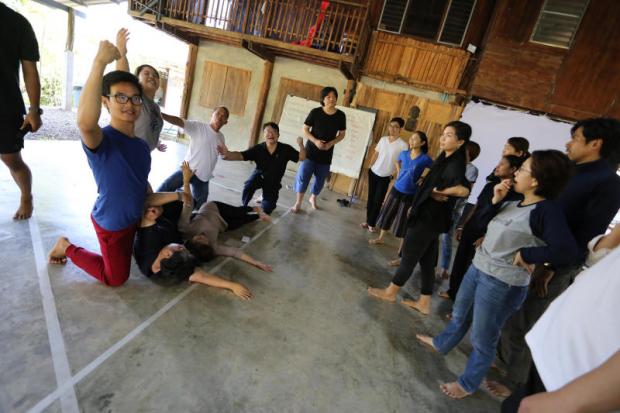 In a open-air theatre in Chiang Dao, children of the Dala-Ang tribe are rehearsing for an evening performance. The children come from a minority group originating from Myanmar, also known as Palong. Some girls were juggling. Two boys walked on stilts. Other boys tried whirligigs. One boy climbed up a set of dangling aerial silks.

In one corner, Prakaidao Kantawong, 26, plays a traditional music instrument to set up a rhythm. Gymnastics trainer Thanupon Yindee, 27, prepares the children for an acrobatics show.

The trainers work with local youth to educate them about the human rights of ethnic minority groups.

The children's parents know the importance of protecting such rights. Their communities were subjected to three raids by Thai officials from the 1980s to the 2000s, for reasons ranging from forest encroachment claims to a lack of national ID cards among villagers. No search or arrest warrants were issued prior to the raids.

In some cases, officials came to the community. They lied to villagers that they could receive blanket donations or make ID cards, but villagers ended up being arrested.

In 2004, more than 200 officials raided this tribal community. This resulted in the arrest of 48 people from the Dala-Aung, Lahu and Lisu tribes for forest encroachment.

In each case, the tribes insisted upon their innocence, but the officials ruled otherwise.

To avoid future conflict, the Dala-Aung tribe was moved to a new location in Chiang Dao. But they didn't have enough money to build new houses and rent the land.

So Makhampom decided to organise a shadow puppet show starring the tribe's children to raise funds for the new community. The play told the story of the Dala-Aung's origin.

The tribe is described as having descended from an angel named Nang Doi Nguen. She was then trapped by a hunter and brought to the human kingdom.

The angel was introduced to the presiding king and his family, an encounter that led her to fall in love with the prince. She was loved by the people due to her healing powers, but also envied. Those who envied her tricked the royal family into burning her to death.

She escaped back to heaven. But the prince kept searching for her in desperation.

They reunite in heaven and decide to return to the human kingdom and bear children.

The show raised over 800,000 baht, enough money to let the Dala-Aung set up a new village for themselves. Today the community is home to 85 households.

"Because of their [stateless] status, the Dala-Aung have this feeling that they don't exist," said Mr Thanupon. "The process of making a theatre production helps them understand who they are. It strengthens their self-esteem."

He continues to train young Dala-Aung in theatre and acrobatic skills in the hope that it will generate a better income for them.

"The theatre is a safe space where people feel like it's more OK to speak up because they're playing made-up characters. But they actually contribute something to society when they perform," he said.

A DIFFERENT TYPE OF CLASSROOM

The failure of the education system is one of Makhampom's main motivations in exercising an alternative approach to learning.

State education maintains a strong focus on rote learning and a lack of teaching in life experience.

"Education doesn't make us more human," Mr Paluehad said. "State education is all about taking control and exerting power. Both are big barriers to learning. In many state-owned schools, teachers often use power to take control of students' thinking and learning experience."

The group is currently running Art Space, a communal space for local children and workshop participants to gather and collaborate in Chiang Dao. The space wants to encourage play and creative interactions as ways to understand human beings.

Inspired by the company's work, different networks have developed in many parts of the country. In Songkhla, a small group of young locals set up a group called Manao-wan, meaning "sweet lemon", to organise a play about natural resources protection.

"We have seen how the Thai education is limited. We believe it can't go forward, but we have to do something about it," said Mr Paluehad.

"We see Makhampom as an alternative learning space that offers knowledge that can't be found in universities. We believe that what we are doing is academic, even though people may not accept it as such."

Theatre promotes equality, a social principle that has been threatened by the Thai education system.

It can be hard to imagine how real change can be produced through fiction. But it's good to remember that at the root of all fiction is a seed of reality.