Having created a buzz and been the centre of interest among the capital's bookworms for quite some time, Bangkok City Library, the yellow three-storey building located at the Kok Wua intersection on Ratchadamnoen Road, is now opening its doors to the public.

Inside the high-ceilinged reception area, visitors deposit their bags in lockers and whip out their ID cards, required for anyone wanting to enter the premises. After inserting the card into the waiting machine, the gate opens into the city's brand-new public space for readers.

Bangkok City Library was open for a test run from April 7-11. During that time, it was already visited by a sizeable crowd of eager people excited about this long-awaited library. 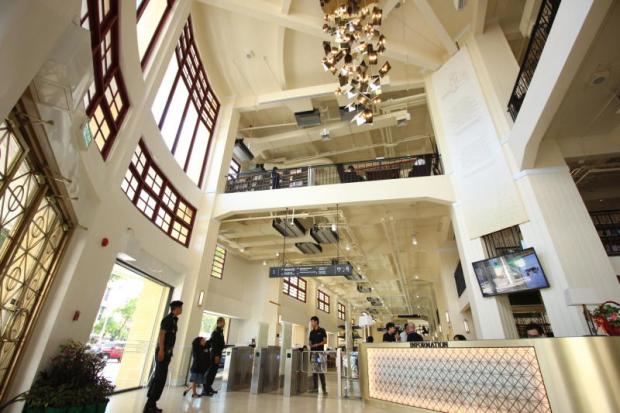 Among the first visitors was Tiamchai Tarntawin, 54, a businessman who goes to a library nearby his house once every week to seek books on history and social studies. Upon hearing that the Ratchadamnoen library is open, he didn't hesitate to hop on a bus and try the place out.

"It's looking pretty good," commented Tiamchai of his first visit to the Bangkok City Library. "They must've had quite a budget for the place."

While he admired the architecture and its atmosphere, Tiamchai said he was quite disappointed with the amount of books he found.

"I think they need more books, especially academic ones. What they seem to have more of right now are spots for people to lounge around," he said. 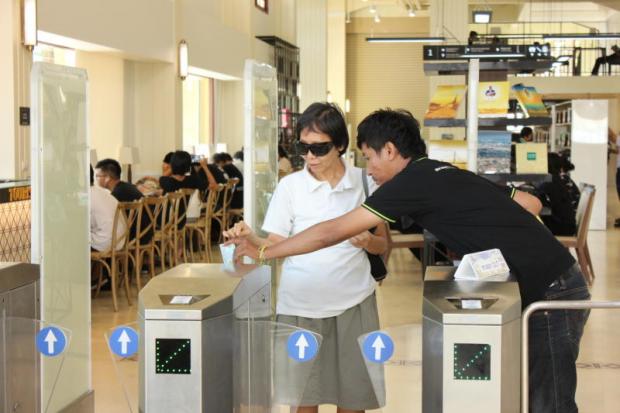 An ID card is required to enter and exit the premises.

Tiamchai's sentiment echoes that of many visitors, as well as different reviews and complaints found online agreeing that the new library just seems devoid of the necessary tomes. Shelves after shelves were half-empty. Looking around, the place was filled with comfy couches, chairs and fancy lamps adorning most desks, even though they -- at the time of our visit -- weren't plugged in. It seems to answer to the needs of the younger generation -- looking for a space where they can work on their laptop in peace -- but perhaps not for those who want to peruse a grand collection of books.

According to deputy city clerk Pranee Satayaprakop, 7 million baht was spent on purchasing hard copy and electronic books, as well as other learning materials for the library. This figure led many to claim that the budget for books is rather inadequate, especially when compared to the 295 million baht spent renovating the 1940s building that houses the library. It cost the Bangkok Metropolitan Administration (BMA) another 600 million baht to lease the place from the Crown Property Bureau for 30 years.

About 45,000 books are expected to be purchased. The rest of the library -- which can house more than 100,000 books -- is expected to be filled with donated books from private companies and the public.

During the soft launch, we browsed the shelves and found most books to be brand-new. There were also books with a stamp indicating they used to belong to other public libraries in Bangkok. 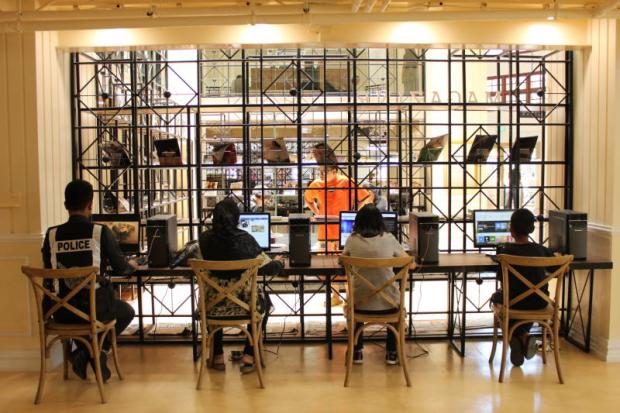 There are computers with internet available for free use inside the library.

Pensiri, a staff member we met at the information counter, said more books will definitely be added to the existing collection. Only parts of the collection were on shelves at that point. Aside from the donation, there were books purchased from the recent Book Fair at Queen Sirikit National Convention Center, and the staff was in the process of adding them to the system in time for the official launch.

Bangkok City Library will see its official opening ceremony on April 28, with HRH Princess Maha Chakri Sirindhorn presiding over the event. The library's Facebook page advised the public to visit the following day instead, for convenience.

When the place is officially open, Pensiri said visitors will be able to borrow two books per week. Entry is free. But in order to borrow books, visitors must get a membership that costs 10 baht a year for adults, and 5 baht for kids. They also have to pay an additional 40 baht (for adults, 20 baht for kids) as a one-off book deposit. The deposit will be returned once the person terminates his or her membership.

As to the rumour that the library would be open 24 hours a day, Pensiri said the plan has since been changed for security reasons, especially after a pipe bomb went off on Ratchadamnoen Road earlier this month. The current official hours are from 8am-9pm, Tuesday to Saturday, and 9am-8pm on Sunday. The place is closed on Mondays and public holidays. It is best to travel by bus or taxi, as the library doesn't have its own parking space. 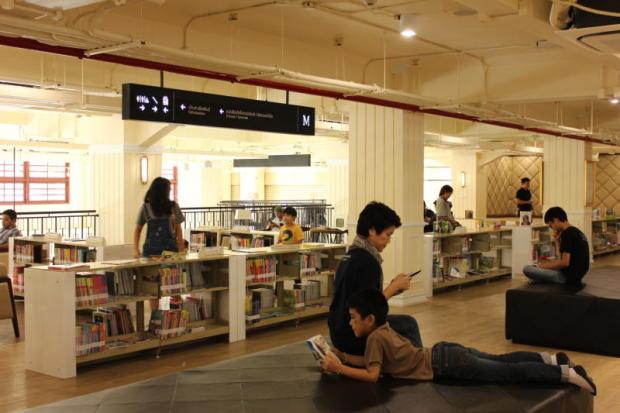 The library drew both young and adult visitors during its soft launch.

Bangkok was named the World Book Capital by Unesco in 2013. The Bangkok City Library marks one of City Hall's projects to honour that name. Aside from it, there are 36 public libraries in the capital where Bangkokians can spend their day reading free of charge.

Upon Tiamchai's suggestion, we visited his usual Soi Phranang Discovery Learning Library on Rajavithi Road to see how the other Bangkok library is doing. It was on a weekday afternoon, and the Soi Phranang library was filled with kids and adults sitting around with their books. The general mood was quiet, as opposed to the bustling atmosphere of the Bangkok City Library. A staff member said there are hundreds of visitors to the library per day. There are even more on weekends.

"I quite like the place. But more often than not, it's just hard to find a place to sit," said Tiamchai.

The books inside Soi Phranang library were generally in good condition, despite many looking very pale and old. There is shelf after shelf of Thai books, with a fine collection of vintage Thai novels and even Thai funeral books. 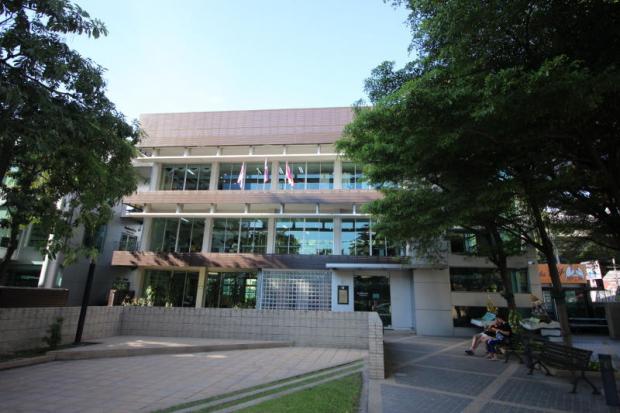 The library staff said books are generally added twice a year according to the budget set out by the BMA. Each time, over a hundred books will be added to the shelves. The library also welcomes donations by the public.

Pisut*, a 48-year-old freelancer who lives near the Giant Swing, said he comes to Soi Phranang library twice a week to read novels. He said the place was convenient to travel to from his house.

"It is quite hard to find a nice public library in Bangkok," he said. "I have tried ones at different universities, but they didn't feel so comfortable there, with all the university students clamouring for space."

Another public library Pisut has tried is the one at Lumpini Park, where the BMA worked with Microsoft to create a discovery learning library focusing on interactive and online learning. He said the place is nice, though he feels it's too far, and so he still frequents the one at Soi Phranang instead.

From his experience in different libraries in Bangkok, Pisut feels they share the same flaws, which are noise, limited books and inexperienced librarians.

"People's manner matters a lot in any library. Some will just make a phone call inside with no regard for others," said Pisut. It was a hot day, yet he chose to sit alone in a room with no air-conditioning to avoid others. "But what's worse, sometimes the librarians are on the phone themselves, and even chatting loudly among one another. They should know better what to avoid in a place reserved for reading.

"It's also hard to find the book you want on these shelves. I don't know how they arrange it, but somehow books never seem to be in the right place here. And there aren't that many books here, either -- particularly new, modern ones. Or maybe they've all become e-books."

When asked whether he feels there's an adequate number of libraries in Bangkok, Pisut replied: "I think the question is, rather, 'Are there enough people going to these libraries?'. Even if there are lots of libraries, if people don't go there -- and especially if they don't treat it well and disturb others -- then what's the point of having these spaces?"

* Name has been changed.

Bangkok City Library at Kok Wua intersection on Ratchadamnoen Road will be open starting on April 28, from 8am-9pm. Entry is free. Visit www.facebook.com/bangkokcitylibrary.