Grandpa donates land for road in memory of wife

TRANG – "Thuad" Thong Kongkaew had lived a long time on his land and wanted to do a good deed in memory of his late wife - so he donated some of it to the community for use as a new road, to save them a long journey to the next tambon.

And now the residents of Na Bin La have erected a billboard expressing their gratitude to 91-year-old Great Grandpa Thong for his generosity.

He donated an 8-metre wide, 350-metres long strip of land to Na Bin La tambon administration organisation for use as a public road.

Grandpa Thong said he had chosen to live his life as a farmer and spent decades on the land with his wife, accumulating a total of 16 rai of land.

When his late wife Thanom wife fell seriously ill 4 or 5 years ago and became wheelchair-bound, he realised he wanted to do something worthy of her.

There was no road leading directly to the area, and local people had to travel a long, tiring route whenever they left or returned home.

So, he decided to donate land for the public benefit, for a new road to shorten their journey, in honour of his beloved wife.

The road has been built and named after him - the Thuad Thong Uthid Road (donated by grandpa Thong Road) - and provides a much quicker route between tambon Na Bin La and tambon Na Yong Tai, shortening to the travel time for residents going elsewhere.

The people in the area felt they should do more in recognition of his generosity and community spirit, and so they recently commissioned and put up a billboard expressing their appreciation.

Grandpa Thong said he was earlier approached by some people wanting to buy the land, offering him a six-figure sum, but he refused to sell. (continues below) 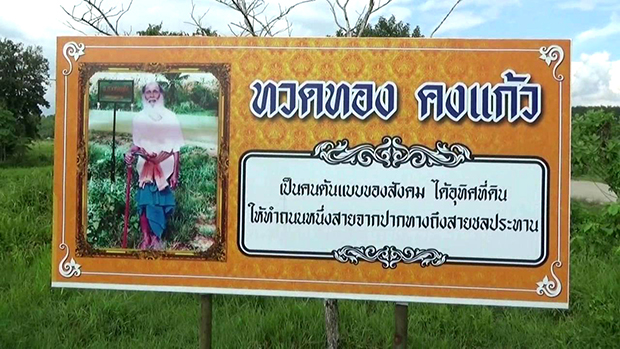 “If people spend their lives earning money, it can all disappear in just a few days of spending. But if someone does a good deed, it will last a long time, even after their death,’’ said the generous grandpa, who has now lived under three Kings.

Somsong Boonmak, his youngest daughter, said her father had always shown his love for others and regularly spent his free time tidying up the public roadside.

At the age of 91, his health is still in good shape and his memory sharp. And he loves watching bull fighting, a popular local sport in southern Thailand. 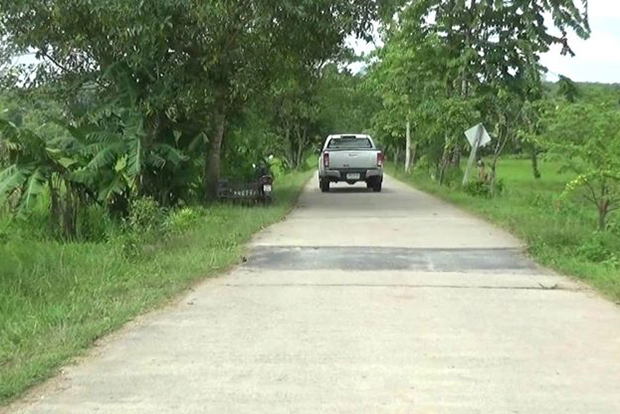