A body of a naked woman lies lifeless on a muddy hill as curious bystanders look on; a ghostly shadow in front of an abandoned train station flails as if in pain; and on a footpath, an elderly woman sits dejected in front of her broken car, daydreaming.

In terms of photography, long has been the relationship between the "French eye" and the "Thai subject". Yet these are images of Thailand that you rarely see. For more than 170 years since Frenchman Father Larnaudie brought the first camera into Siam, Thailand as a subject has been orientalised -- presented as an exotic land full of both wonder and chaos. Images of sparkling temples, serene beaches, and the lives of the poor and decrepit are pushed out for the world to see, but in "The French Connection", a photographic exhibition displayed at the Bangkok University Gallery, all those clichés are all thrown out the window.

Eight French photographers, all whom have lived short- or long-term in the Kingdom, have offered their own singular, thoughtful, critical views of the country -- analysing Thailand, and sometimes themselves, in a much more contemporary way. 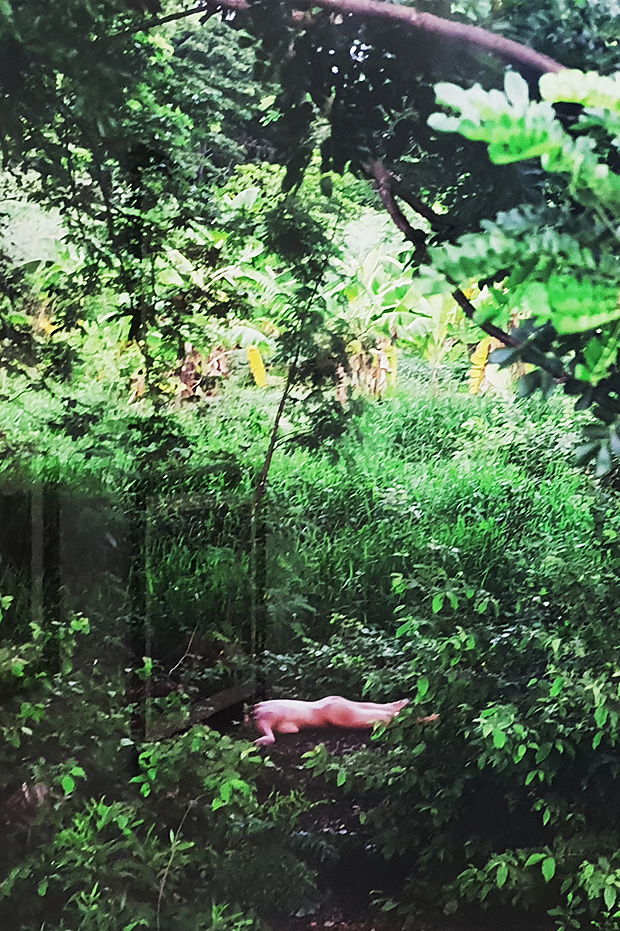 On the second floor, the photographs take a more artistic turn with Claude Estebe's Ride On (2017-18), Sonia Hamza's Chinatown Doesn't Follow The Metronome Of Bangkok (2016-17), Myrtille Tibayrenc's Unexpected Witness (2008) and Didier Mayhew's Anterooms (2016-17). And though each and every one has a story to tell, only a select few seemed to really grab the attention of viewers at the opening.

Lathuilliere's bright and colourful Studio Tang Daw on the first floor was one. Having had regular stays in the Lisu village of Ban Sam Kula in Chiang Rai since 2007, Lathuilliere, in the Lisu New Year of 2010 as well as 2016, invited villagers to have their picture taken in a makeshift outdoor studio. In his anthropological portraits, we see first-generation immigrants evolving their sense of fashion throughout the years in order to adapt to globalisation and global trends -- going against the typical shots of ethnic imagery published by the media and museums. 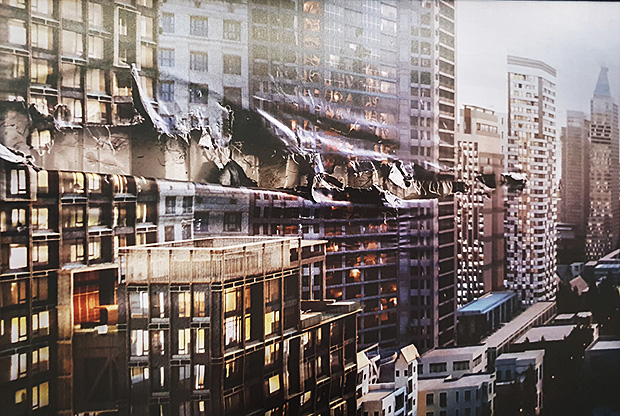 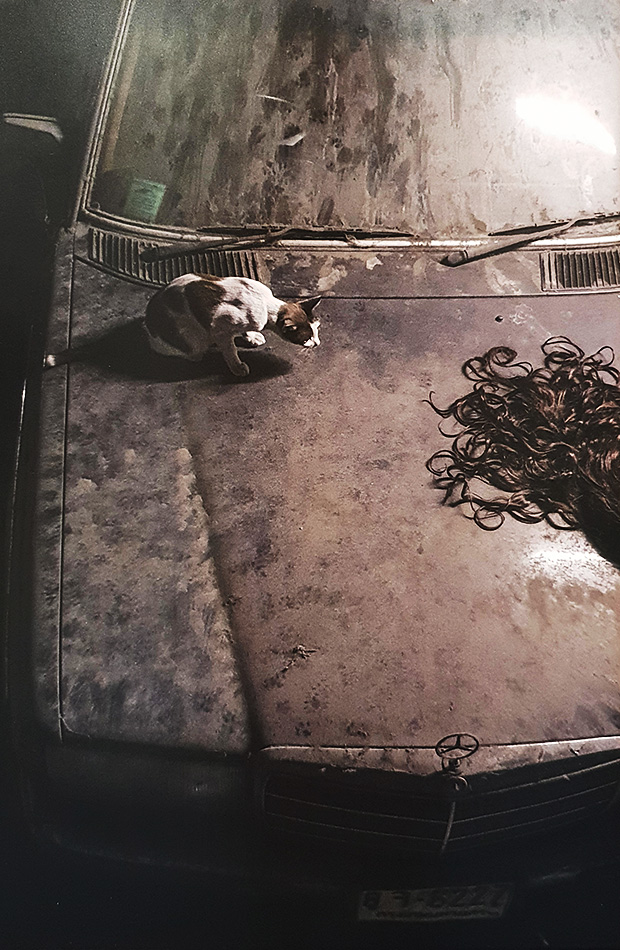 A continuation of his 2004 work where he photographed the expressive stances of Japanese women's legs, Claude Estebe decided to shoot one of Bangkok's most commonplace visual identities: women side-saddling motorbikes. On the walls are large tongue-in-cheek images of legs of unknown women, balanced precariously on zooming bikes. Although it may be a stale image for locals, Estebe believes that the sporty -- even perilous -- posture is full of potential questions. For example, while Thai women still have a choice in sitting one way or another, side-saddling is prohibited in Europe, while on the contrary is enforced in the Indonesian province of Aceh.

Yet it was Myrtille Tibayrenc's Unexpected Witness and Didier Mayhew's Anterooms that really garnered the most profound and critical conversations. Bangkok-based Tibayrenc, who created Toot Yung Art Center as well as co-directing the Bukruk Urban arts festival, presents viewers with the nude body of a sex worker named Anna, lying lifelessly in construction sites, filthy ponds and lush green nature.

"Some 10 years ago I was invited by Crush magazine to make a series of nudes," she states. "They presented me with a list of penthouse models to choose from, but I was longing for something altogether more real and raw. I had been in Thailand for about two years and then was very impressed by the sex workers in Patpong, coming mostly from Isan." 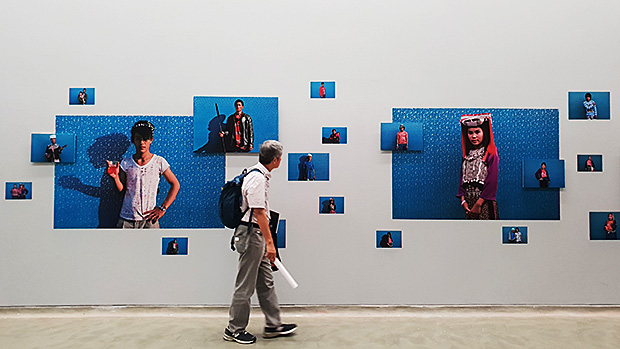 Becoming acquainted with 30-year-old Anna, who worked night shifts in order to provide for her son, Tibayrenc decided to work with her for this set of photographs. She took inspiration from Thailand's local newspapers, splayed with censorless bodies.

"I wanted to make a naturalistic nude, exposing this beautifully damaged body, echoing hundreds of bodies we see in Bangkok's nightlife."

What results is a beautiful, raw and yet disturbing set of photographs which reflects the crudeness of life itself as well as very blatant social inequalities.

Didier Mayhew's Anterooms, however, is a dark, raw and uncanny look into the self. Living in Nepal for more than 10 years and doing social and humanitarian work with those living in the margins of society, the former anthropologist and psychologist had found himself in Bangkok due to a Nepalese visa issue.

"I was a bit puzzled to be in this huge city. I needed calm, emptiness, and Bangkok seemed to be the opposite of what I was seeking," he said. "There was, however, something in the city that was intriguing me, especially at night. Something quiet and discreet that made me want to dig further."

Like still shots from a dramatic film noir, Mayhew captured lonesome and eerie scenes from areas that no tourist or local would dare venture through. There's a of a pair of feet, lying next to a small animal carcase; a woman sitting in the darkness in the middle of train tracks; and a cat staring at a mysterious lock of hair on the hood of a car. He crossed paths with the homeless, drug addicts and even thieves who stole his camera, but instead of merely judging, their state of being caught his attention even further.

"Each of them seemed to be living in a land of waiting, a place somewhere in-between, where life and death, loneliness and wholeness, are closely entangled," he said. "Disturbingly, I felt comfortable in this underworld, and as time went by, it is also my own state of being that was put into question. I've always been attracted by what's happening in the margins, maybe because I feel myself in the margins."

Becoming more and more personally involved in his project, Didier realised that he himself had to be inside the photos as well. The feet next to the animal carcase? That's him. The shadow flailing in front of the train station? Him again.

"This is how my work turned out to be, not a documentary in its traditional sense, but an inner journey that was also questioning my own existence."