Jagged granite, chipped marble and debris from construction sites become an archive of their own past. At a glance, one won't see the leaves and flowers superimposed on those broken slabs of rock. At closer inspection, the melancholic splendour of the now-no-more greenery is there, delicately printed on the hard surface of the material that has replaced it.

Singaporean artist Zen Teh is interested in soil, earth, rocks, leaves, the ground beneath her country, and the poetry of textural reincarnation. Her show, called "Garden State Palimpsest", which is ongoing at Artist + Run in Narathiwas 22 until Sept 15, consists of three parts: a set of five black-and-white photographs of hillside raked up by machinery; an artist book containing text, essays and pictures, arranged like an unfolded accordion; and a set of "photographic sculptures", those rocks whose faces are layered with the images of an extinct garden.

The word "palimpsest" hints at layers and transformation, and Zen's "Garden State Palimpsest" trains its eyes at the way one thing replaces another or one environment takes over another, and leaves behind broken traces and forlorn fragments, the physical and mental past that was immediately forgotten -- and now remembered.

The jagged rocks -- the "photographic sculptures" -- have been taken from real construction sites in Singapore, where trees, gardens and weeds were once teeming -- the "rural environment… replaced by a densely urban cosmopolitan", as the artist says. With the image of a garden put back on the very thing that has replaced it -- that has destroyed it -- the sculptures are a convergence of the past and the present, a real-time projection of what is and what has been. The image overlaid on each rock is recreated based on the artist's conversation with kampong dwellers -- previous local residents whose land was replaced by condo buildings.

Besides the conceptual background, these pieces are striking to look at. The intricate, botanical superimposition is sharp enough to discern its pattern and yet somehow cloaked by a faint sheen (these sculptures are handmade applying an image layering method to interior finishing materials, which are mostly granite and marble). That each piece is chipped way, incomplete, is part of its imperfect beauty.

The fraught relationship between the residents and their land is not exclusive to Singapore; in fact, "Garden State Palimpsest" looks at a common phenomenon, and much-reiterated dichotomy, of Southeast Asia, where progress and tradition, the old and the new, the nostalgic past and the modern future, are constantly in confrontation and negotiation. It works differently here, because Zen's treatment of the debate is nuanced, evocative and impressionist. Singapore is one of the most developed countries not just in the region but in the world and that confrontation is still happening (the exhibition also has a video of the artist's interview with former residents whose land became construction sites).

Then, from another perspective, from a place where such confrontation is even sharper, Zen puts up five photographs of pruned hillside in Chiang Rai, where the soil has been excavated and used in construction (the artist was in a residency programme at Angkrit Gallery in Chiang Rai in 2013). The haunting texture of earth, scooped and scraped as if by giant forks, "resonates with the photographic sculptures". It is, and it speaks of change that comes from the most fundamental material, the change that defines our ever-constructing present at the cost of our fragmentary past.

"Garden State Palimpsest" is on show at Artist + Run in Narathiwas 22 until Sept 15. 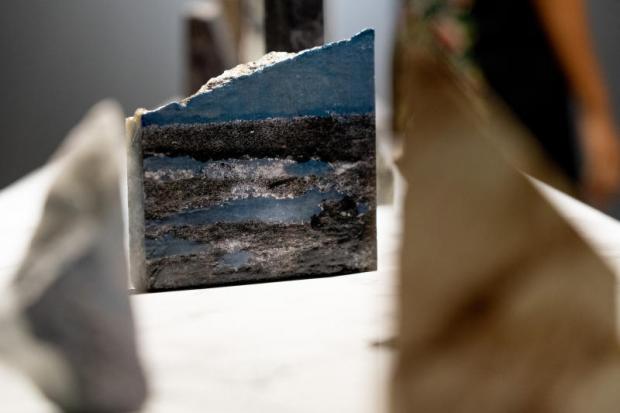 An image is layered on a jagged piece of marble. photo: 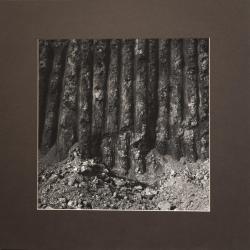 A photograph of a hillside area taken in Chiang Rai. photo: