The concert of the decade?
Life
Arts & Entertainment

The concert of the decade?

Last Tuesday at the Thailand Cultural Centre, the American violin virtuoso Joshua Bell performed Max Bruch's Violin Concerto No.1 In G Minor and Pablo de Sarasate's Zigeunerweisen to a capacity audience. It was no surprise that tickets had sold out for this highly anticipated event. The universally admired legend has enjoyed over three decades in the very top division of violinists, giving some 150 concerts worldwide year in, year out, and his forty-plus recordings as an exclusive artist for Sony Classical have already guaranteed his legacy as one of the all time greats.

It is occasionally reported that a particularly renowned soloist's visit to Bangkok might well vie for an accolade such as "concert of the season". It is no exaggeration whatsoever to predict that Bell's appearance here could easily turn out to be the classical musical highlight of the entire decade. His performance was, quite simply, stunning. Given enthusiastic and committed support from the Royal Bangkok Symphony Orchestra (RBSO) and Canadian conductor Charles Olivieri-Munroe, the entire programme had indeed exuded verve and excitable energy from the very outset.

Olivieri-Munroe himself is by now a very familiar personality at the TCC, and he continued a most likeable approach, taken on previous visits, of verbally introducing the compositions. He explained how the design of this particular concert departed somewhat from the conventional "overture-concerto-symphony" format, with tonight's focus obviously being on the two spotlights for the star soloist -- with Bruch's immortal concerto constituting the main body of the first half, and Sarasate's stellar showpiece being placed cleverly at the end. For consistency of general style, the other works were also deliberately selected from the Romantic period.

Weber's Euryanthe overture got things off to a spectacular start. Its explosive opening allowed the entire RBSO to immediately shine as a whole, whilst the contrasting middle section -- quiet and reflective -- had some nicely controlled legato phrases for the front desk violins. The following fugato passage featured tight dotted-rhythm playing, starting with the lower strings, then leading back to the opening "Mannheim-rocket" theme, which set the stage perfectly for the main attraction of the evening.

Bell's first ever concerto recording -- in 1988 with Sir Neville Marriner and The Academy of St. Martin in the Fields -- was indeed the Bruch. Having recently recorded this warhorse again with the very same orchestra (this time conducting himself from the violin, as their music director), it is clearly very special to him. As is surely also the case with the 1713 Huberman Stradivarius and Tourte bow with which he travels the globe. Handling these priceless objects with tactile reverence, Bell effused an effortless melos of indescribable beauty, which sang from the first open G-string of the vorspiel, his tasteful employment of portamento slides and luscious vibrato judged to perfection. Never overdone, never wanting for more -- he absolutely had the measure of this concerto's form and historical context. Composed after the Beethoven and Mendelssohn, but before the Brahms and Tchaikovsky, it takes an artist of superior refinement and experience to capture the essence of the Bruch.

At the same time, Bell's octave-run embellishment towards the end of the first movement put his own special signature on the composition. Some deftly managed accompaniment from the RBSO then effected a smooth transition to the sublime adagio, in which an already engrossed audience was further captivated and entranced by Bell's rapturous tone and delivery of the soaring melodies that make this particular work so memorable. The gypsy-infused finale again reminded why the truly great violinists are just that. The copious double-stopping -- initially in thirds, later in tenths -- is challenging on all fronts, technical and musical. Many violinists get close in most departments. However, to hear the full clarity of violinistic execution on this occasion was a genuine privilege.

Bach's famous Chaconne for solo violin was performed by the RBSO after the intermission, in its orchestrated version by the Swiss-German composer Joachim Raff. Its crystalline textures are expertly laid out -- Raff convincingly "imagines" many of the possibilities suggested in Bach's masterpiece, but at the same time takes a modest measure of artistic license in the spirit of Romanticism. Olivieri-Munroe inspired all sections of the orchestra to fully engage with the rich tapestry of sound.

Also clearly a favourite of the maestro, Elgar's powerful tone-poem In The South raised the atmosphere of fevered excitement in the auditorium even higher. The RBSO truly excelled, whilst special mention must be made of viola principal Miti Wisuthumporn, who played the central section's exposed solo with admirable nerve and control.

Zigeunerweisen duly wrapped up this unique evening of musical enjoyment at the TCC. With Joshua Bell, Olivieri-Munroe and RBSO by now totally at ease with each other, Sarasate's ultimate celebration of violinistic bravura couldn't have been a more fitting conclusion. 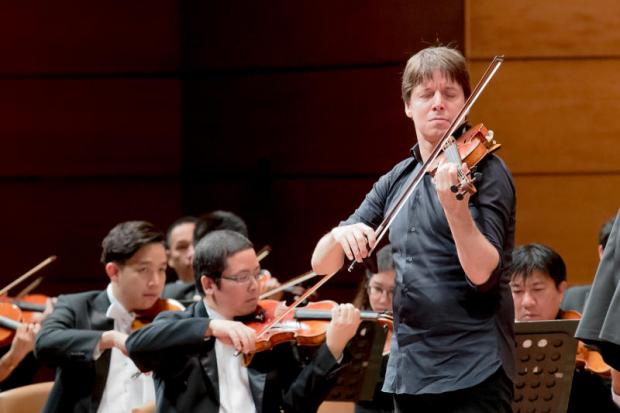 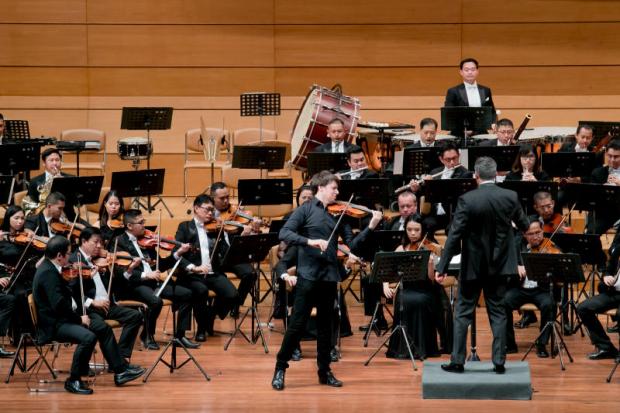 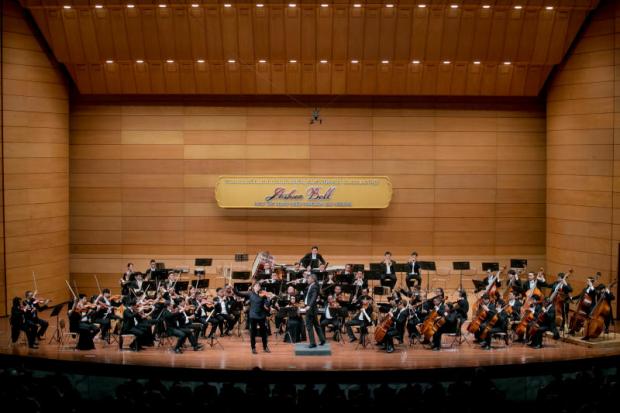