The recently restored version of Plae Kao, one of the most important films in Thai cinema history, is returning to the big screen

The star-crossed lovers coo. They ride their buffaloes through a verdant field, splash mud, evade spiteful parents, and make a vow at the shrine of the banyan tree. But their romance, like all memorable romances in books and life, is doomed by the circumstances of fate, tragic and scarred, and their destiny is one of the most heartbreaking in the canon of Siamese literature and film.

Plae Kao (The Scar), adapted from Mai Muengderm's novel, is a 1977 film that remains a beloved classic. Directed by the late Cherd Songsri, the 4K restored version of the 41-year-old film will make a much-expected return tomorrow at Scala in a special premiere, the old 35mm film polished to a new digital splendour. We can look forward to a full house (though tickets are still available as of this week). The film will later be released in a regular programme -- a rare re-release of a vintage film -- in October.

Not many films evoke rural Siam with such pride, honesty and unalloyed innocence. The original novel came out in 1936 and the story is set in that period. The lovers are Kwan and Riam, whose parents are sworn rivals, and as the boy and girl sing songs and frolic in the muddy puddles in a Bang Kapi field -- when Bang Kapi was still a village surrounded by an expanse of paddy fields -- their love is prohibited, leading to a separation, a misadventure in heartless Bangkok, an inevitable fight, and a tragedy at the banyan tree where mortal lovers aspire to an immortal love.

"When the film came out in 1977, the country was reeling after turmoil," said film lecturer Prawit Taeng-aksron, referring to the political trouble that characterised much of the 1970s, culminating in the bloodbath at Thammasat University on Oct 6, 1976. "The film, in a way, represented a kind of purity at a time of despair. People wanted to escape to a better time. No wonder it was a big hit."

It was something of a phenomenon: The Scar made 13 million baht, the highest in history up to that point. Internationally, it was invited to screen at various film festivals in Europe, won a big prize in France, and called attention to Thai cinema at a time when it was virtually unknown outside Thailand. In many ways, the film also imprinted an image of Siam in foreigners' minds as a pastoral paradise populated by tanned youths riding buffaloes across rain-splashed fields. (Interestingly, however, another important film from the same year was Tongpan, a rough-edged, Marxist-inspired, social realist docu-fiction exploring the hardship of rural citizens; that film, too, was screened at international festivals and remains much-cited by scholars today).

Starring Sorapong Chatree and Nantana Ngao-krachang as Kwan and Riam, The Scar, though a romantic tragedy, offers a solace of nostalgia. Forty-one years later, the country remains, in a way, mired in turmoil, and a nostalgia for the golden years of the past is still very much a palpable sentiment. The Scar can't have returned to the screen at a more suitable time.

"Our previous restoration project was the 1954 film Santi-Vina, which is a title that not many people had heard about or seen, since the original print had been lost for a long time," said Sanchai Chotiroseranee, deputy director of Thai Film Archive (Public Organisation), which oversees the restoration of the film. 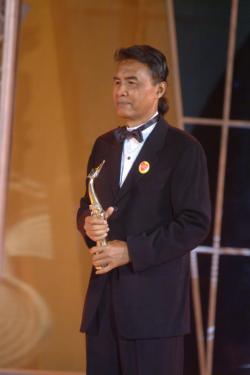 "This year we chose to restore Plae Kao, or The Scar, because it's a popular film, a classic so dear to so many people. To bring it back to the screen in good condition is to emphasise the importance of film restoration and the preservation of our motion-picture heritage."

The late director Cherd Songsri was, and is, a respected figure in Thai cinema, an artist who was determined to use the medium of moving images to promote "Thainess" -- which, in those days, carried the dignity of tradition, ritual and history. He began making films in the mid-1960s -- films such as Nohra, Mekhala and Payasoke -- all in 16mm and screened with live dubbers. Cherd then travelled to the US to "learn more about professional filmmaking", according to his wife Chantana. His experience in Western society produced in him a yearning for Thailand's past and inspired him to return to the roots of traditional culture. The Scar, which had been made into a film before in 1940 and 1954, was a perfect choice.

Upon returning to Thailand, he had to make two romantic comedies to raise his profile and increase his funding. When he finally finished The Scar in 1977, no distributors wanted to acquire the release rights, believing the period setting was a tough sell. Cherd contacted a few cinemas himself to screen the film -- today what he did would have been called "independent filmmaking" -- and quickly proved the distributors wrong. The film was a big hit in Bangkok, then in the provinces, and soon it grew into a national phenomenon that brought in historic box-office revenue. People queued up at dawn to get tickets, his wife recalled in an article published recently by the Thai Film Archive. The two stars, Sorapong and Nantana, became the embodiments of country boy and girl in their wholesomeness, and the names of their characters, Kwan and Riam, attained a classical status that symbolised the beauty and sadness of young love.

The huge popularity of the film began a craze for bucolic nostalgia, and many other films featuring the same sentiment were made in the following years.

"In a way, Cherd's script was better than the original novel," said Rungsima Kullapat, a cultural scholar whose 1996 master's thesis analysed the three film adaptations of the novel. "Cherd was also a writer, and he put details of traditional folk performances into the film, such as the harvest song, or pleng choi, and he emphasised the traditional belief and the relationships between the characters. He made the story richer. If you read the novel, you won't cry. But the script will make you weep."

Unlike most old and classic Thai films, The Scar has never been released on DVD. That means a chance to see the film, even on a small screen, has been rare. Despite being one of the most important Thai films in history, the film hasn't been appreciated by the generation that followed its 1977 release as much as it was supposed to be. Prawit, the film lecturer, said that only a handful of his students knew about the film.

"Usually classic films are a source of national pride, but not so much here," he said. "Let's hope the re-release of The Scar will make people realise its cultural importance."

Plae Kao (The Scar) will screen tomorrow at Scala at 8pm. Tickets at 120, 140 and 160 baht are still available. The film will be released as part of a regular programme in October.