Terminal illness and dying have never seemed so cute as in Peter Hutchings' latest dramedy, Departures, about the odd friendship between an emotionally stunted hypochondriac and a terminally ill manic British girl. 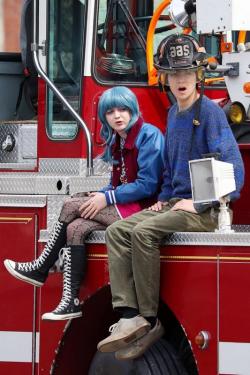 A scene from Departures. Photo courtesy of Mono film

Though the real reason is unknown, the film has gone through a number of name changes on its way to the big screen, starting out as Arrivals, and Then You Came, before ending as Departures.

Although the film features quite impressive performances and some touching moments, Departures somewhat suffers from the sort of same old cliché that we've seen from so many teen terminal-illness weepies -- A Walk To Remember (2002), The Fault In Our Stars (2014) or Midnight Sun (2018) -- that came out before, not to mention all the teen-cute pop songs reminding you what you're supposed to be feeling.

The central characters in Departures are a sensitive, withdrawn 19-year-old named Calvin Lewis (Asa Butterfield, Sex Education), who works as an airport baggage handler alongside his father (David Koechner) and older brother (Tyler Hoechlin). Calvin is afraid of most things in life, particularly because he believes he's dying. He's convinced his family that he needs an expensive litany of medical testing. Despite the results turning up negative for every illness, Calvin still believes he's dying and journals everything about his fantasy symptoms in the diary.

All of this changes when he's sent by his doctor to join a support group for cancer sufferers in order to observe and to get some perspective on what it's actually like to be dying.

And there, he meets and befriends Skye (Maisie Williams, Game Of Thrones), who unlike Calvin has every right to be there, since she's actually suffering from the disease, and has less time to live.

In the opening scene, we see Skye receiving the sad news about her condition from her doctor. Her reaction is somehow casually cheerful in contrast to her shattered parents. Then she points out: "You win some, you lose some," and that sums up her unique character.

After the two met, Skye enlists Calvin to help her carry out her bucket-list mission, for she is determined to spend every last moment living life to the fullest. In return she helps Calvin talk to his crush, an older flight attendant named Izzy (Nina Dobrev), whom he met at work. Little by little, Skye, with all of her fun and enthusiasm, teaches Calvin to embrace life while she's about to lose her own.

Sounds like a good plot for a movie, but Departures is unfortunately unable to deliver the elements well enough. Especially since there's such a big contrast between the emotional scenes and the goofy and silly ones, making the movie felt a bit half baked.

The film's most boring moment concerns Skye's desire to complete her bucket list before she dies, which leads to many uninspiring moments in which Calvin helps her cross off such silly tasks as learning to shave a man or punching someone in the face.

The film's two leads, Butterfield and Williams, give impressive performances and are believable as friends. While Williams makes her sweet and cheerful character appealingly vulnerable, Butterfield successfully manages to uses his sad face to the fine effect. They're good enough to make you wish the two stars had been paired in a better film.

Indian wedding expo will be a grand affair