Some nights nothing happens, and some nights too much happens. For one crew of rescue workers -- volunteers at one of Thailand's largest rescue organisations, Ruamkatanyu Foundation -- each shift is predictable only for its unpredictability. Nights at their base beneath a Nonthaburi overpass are spent monitoring the police radio channel for its most commonly-used word -- accident.

While the crew waits, Ploy* is shopping. There's no food at home so her boyfriend has driven her to 7-Eleven. It's a couple of minutes by motorcycle and they grab some snacks. On the way back, at the intersection within sight of Ploy's condo, a taxi runs a red light as they go through on green.

Motorcycle accidents can be the worst, for their physical damage and depressing frequency. The police channel broadcasts the accident location and the volunteers jump in the ambulances, flick on the sirens and gun the accelerator, racing to the scene. Ploy and her boyfriend are given emergency first aid -- head immobilisers, tourniquets and splints. They'll probably survive, but it's not guaranteed. They're taken to hospital while the rest of the crew head back to base to wait for the next accident. With so many per night, the crew have no time for aftercare.

This scene replays several times each night, under Noppadol Srithongkham's quiet control. The leader of this crew, with the macabre job title of body collector, Noppadol is the calm and efficient nucleus of his team. Tonight the team numbers six, who all give the same answer to the question of why they volunteer -- to help people and gain merit. But the camaraderie in their small group is palpable, as is its status. Their open-air office of tattered sofas forms a social hub, and people from the local community drop by to chat or request help, be it getting granny to the hospital or catching a giant snake in their yard.

Some accidents just need a few Band-Aids. Sometimes all the equipment in the ambulance is deployed, and sometimes it's simply too late. On one of the nights Life spent with the team, Sumet* was making burgers in the local KFC. He was 21 and a heart attack killed him instantly. There's no need for sirens when it's a corpse. In the back of the ambulance, Noppadol takes his fingerprints for the death certificate, working in a detached yet efficient manner.

This nightly theatre of life and death is the focus of an upcoming art exhibition by R. Scott Davis, a New York photographer and professor at Stamford International University in Bangkok. He's been riding shotgun in the ambulances for nine years, photographing the aftermaths of stabbings, shootings, drownings and the countless road traffic accidents. Recently he started taking his students along to witness the work of the volunteers. 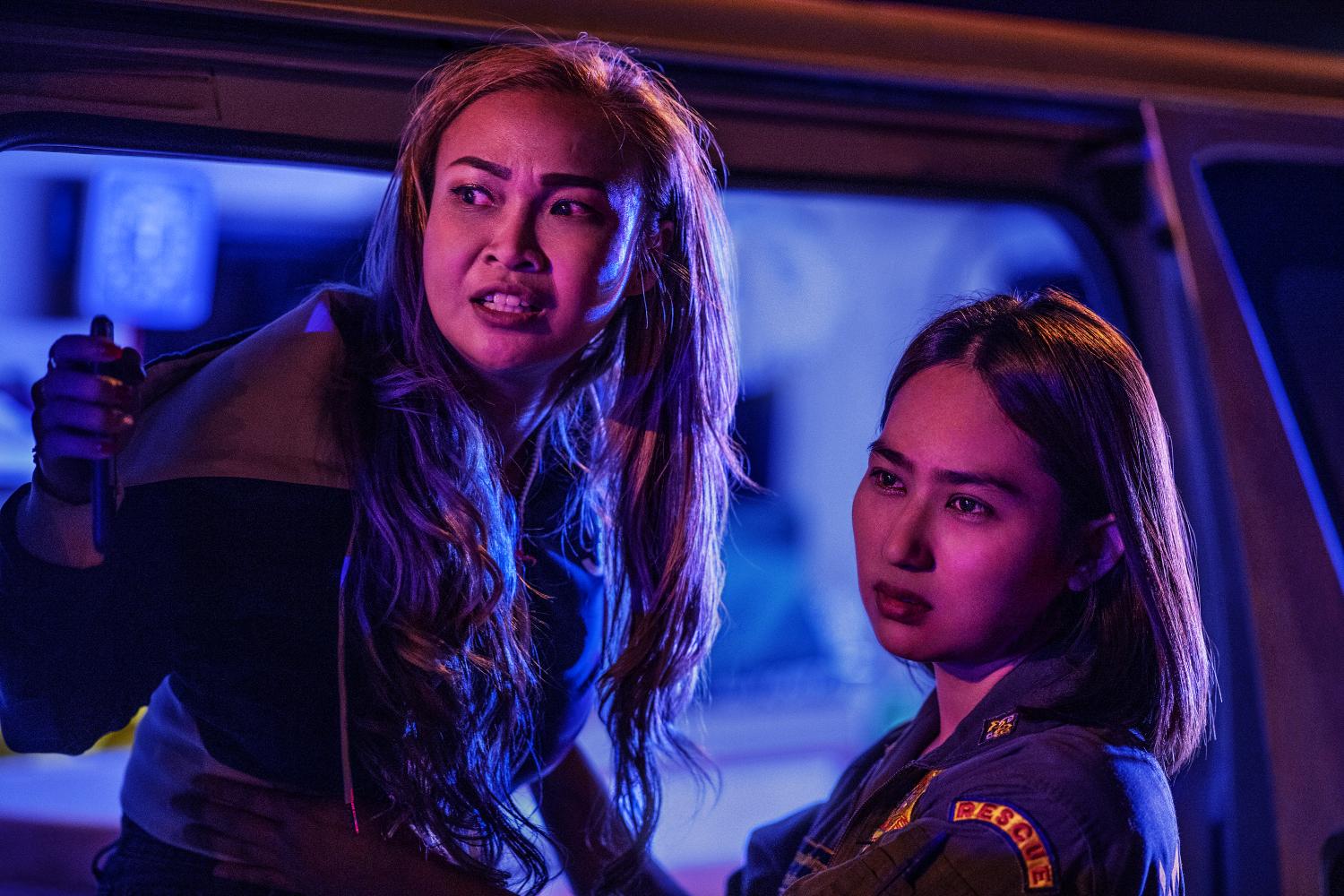 "I was teaching a photojournalism course and the original impetus was that a couple of students were interested in more extreme aspects of photojournalism, for example conflict photography," Davis explained. "I wanted to give them an experience that would be as close to that as possible, as a way of developing technically."

Describing his early ride-alongs as amazing and transformative experiences, Davis believes that for his students, a night with the volunteers is an unsurpassed and unique element of their technical and artistic development.

"In terms of technique you really have to be on point," he said. "But also you find yourself responding to situations you never see in everyday life and the way you process that stimulation is a learning experience as well."

Coming face-to-face with trauma and death is stressful. Davis monitors each student carefully, both during and after the event, only inviting those he thinks will be able to handle it. One Vietnamese student, My Linh T., known as Lilly, was in her early 20s when she first went out with Davis and the volunteers. 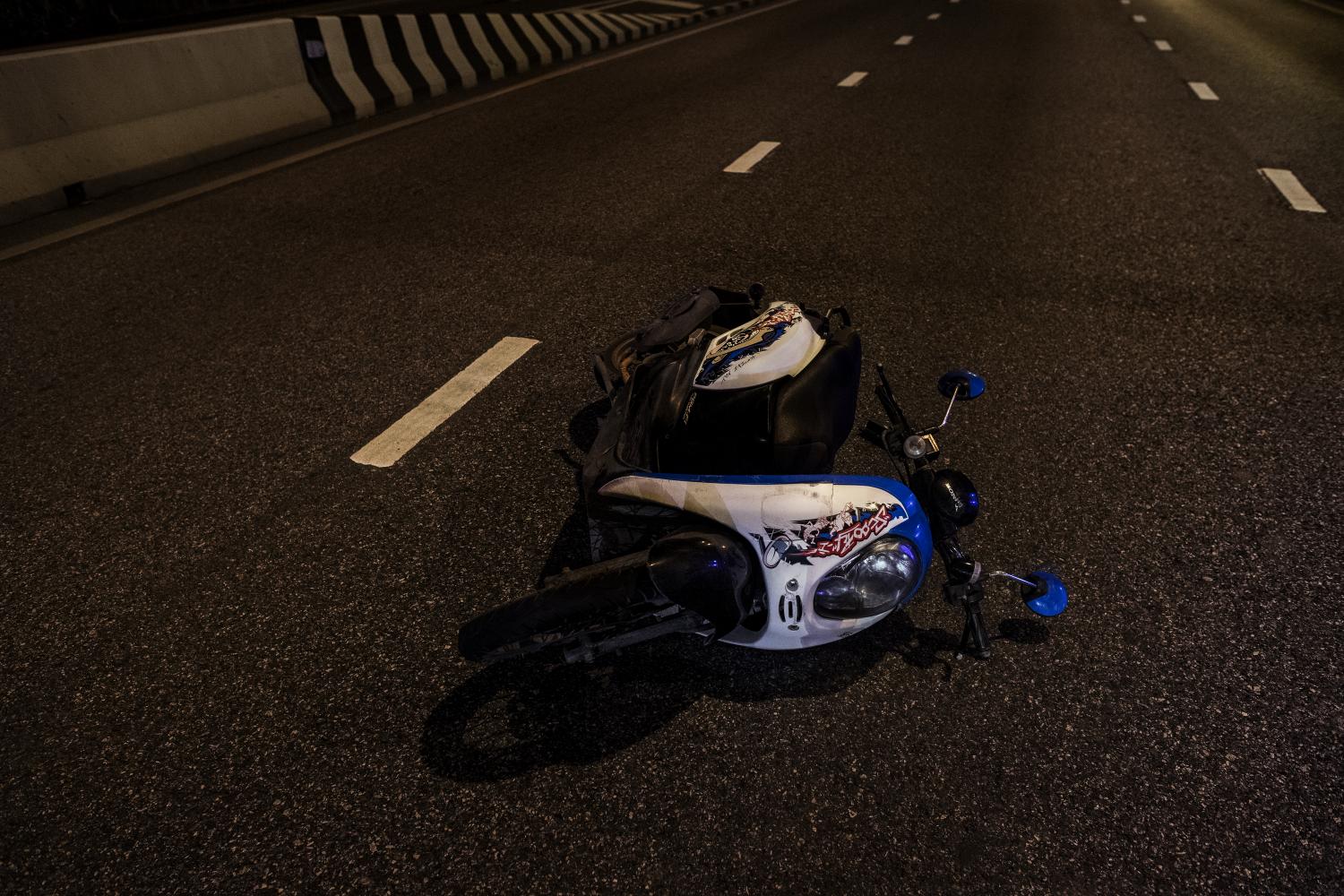 "I was thinking, OK, I know it's hardcore, and I have no clue what I'm getting into, but let's just go and try," she said. "The first night was the first time I saw a dead body -- a homeless person -- and I couldn't sleep. But it gets easier."

Key to the students' presence is giving the crew physical space and the victims and relatives emotional space.

"The moment that's very difficult to deal with is when I'm taking photos and you see the relatives of the victims," Lilly said. "When they burst into tears, or when they see their son's or daughter's body -- I can't take photos. That's a very intimate moment and I feel like I offend people if I do that."

For Davis and his students, the logical extension of their field work was to stage an art exhibition. The show, called "Dispatch", opens at Ilford Galerie in Bangkok this Saturday. Its haunting images are technically beautiful, reminiscent of dramatically lit movie stills, and rich in distressing detail. While the majority of the exhibition's prints focus on the crew's first aid work, layers of a wider narrative are also covered, from the bystanders and beyond, taking in grim artefacts -- skulls and DNA swabs -- in the labs of the Central Institute of Forensic Science. Often the quiet dignity in the photos is at odds with the story they convey. 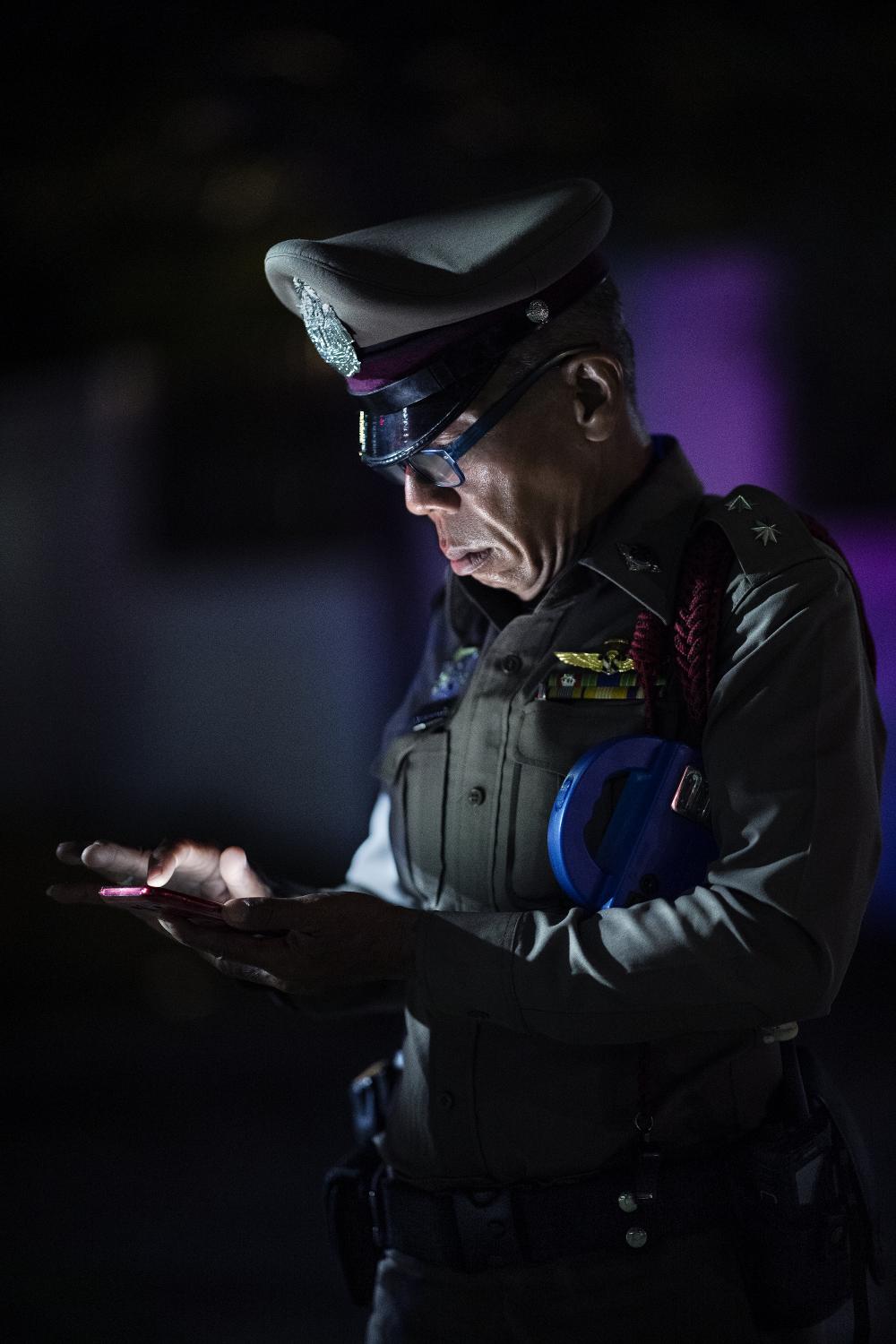 A policeman checks his phone at an accident scene. R. Scott Davis

"When you spend time with these emergency service people you realise the massive amount of death that occurs due to motorcycle accidents," Davis said. "The death toll in Thailand is unbelievable. It's harrowing when you see it, and we see it all the time."

A 2018 World Health Organization report named Thai roads as the deadliest in Southeast Asia and among the worst in the world for vehicle accidents and fatalities. Motorcyclists and their passengers accounted for 74% of all road deaths in Thailand. Davis hopes his show will trigger an understanding of the gravity of the situation.

"I want to show people that it's not just a statistic," he said. "Someone maybe had a drink or two too many, got on their scooter and just happened to slip a little bit, and the next thing it's game over. I would say that if there's one single takeaway idea that we would like to express, it's that people take that and have it stay with them as a cautionary tale."

But why does Thailand have such a horrific death toll? The WHO report blamed weak law enforcement against drink-driving and helmet wearing for motorcyclists and riders. Noppadol, who has worked for Ruamkatanyu on 8pm to 8am shifts for the past 18 years, is in a unique position to identify the root cause.

"In my opinion, everything comes down to discipline," he said. "People drive in the direction they are not allowed to or ignore the traffic lights. Many times there are cases of drunk drivers."

Faced with such shocking statistics, and riders that know the risks but leave the motorcycle helmet at home regardless, what impact does showing these tragic images have? Noppadol shares Davis' view that the Dispatch exhibition could be a starting point for change.

"It's a good move to raise awareness. Discipline is crucial. A story like this should not just be limited to the media but it should be incorporated into the school curriculum, from childhood. But I think this will take time."

* Not their real names 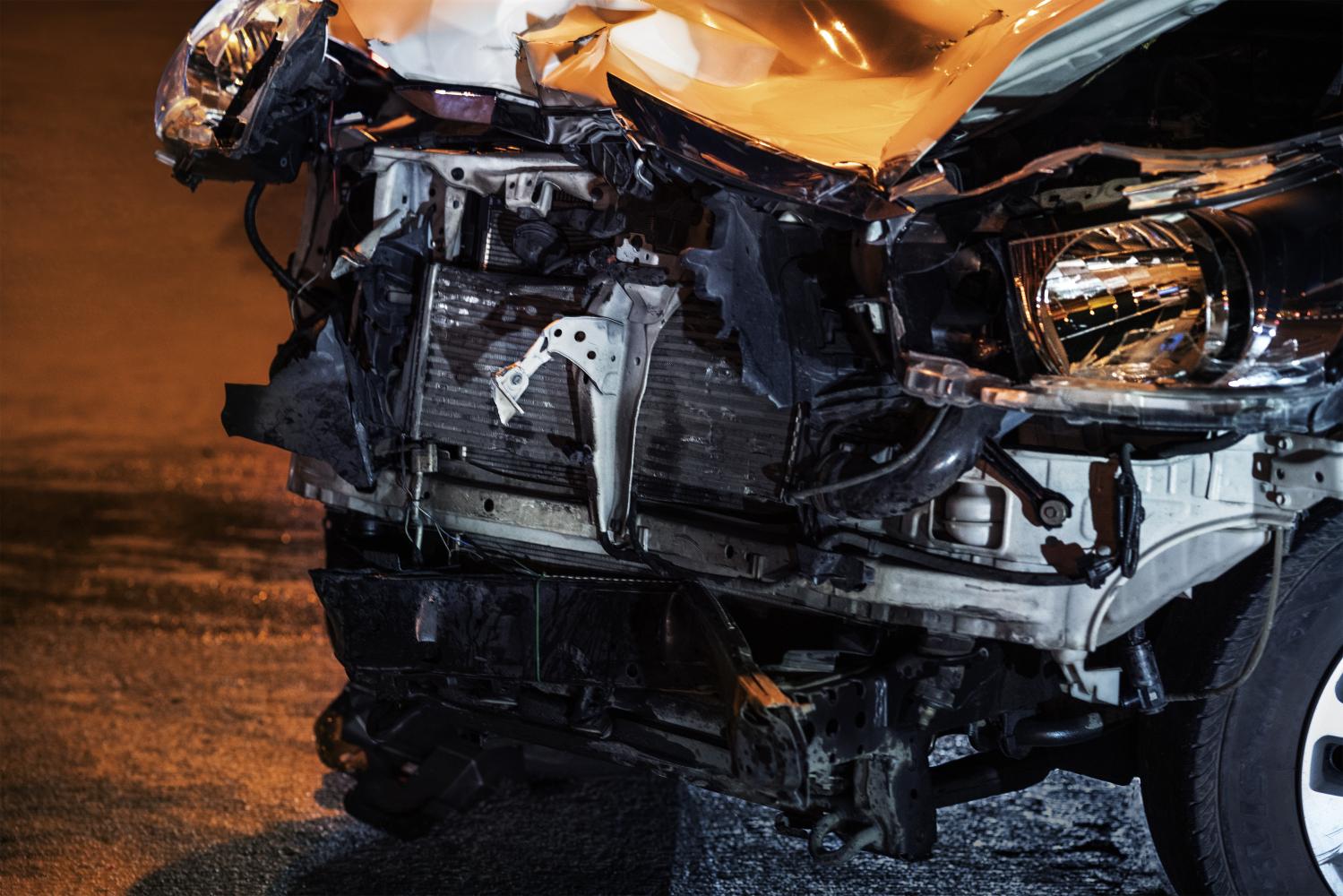 A damaged car at an accident scene. Photo by My Linh T. My Linh T. 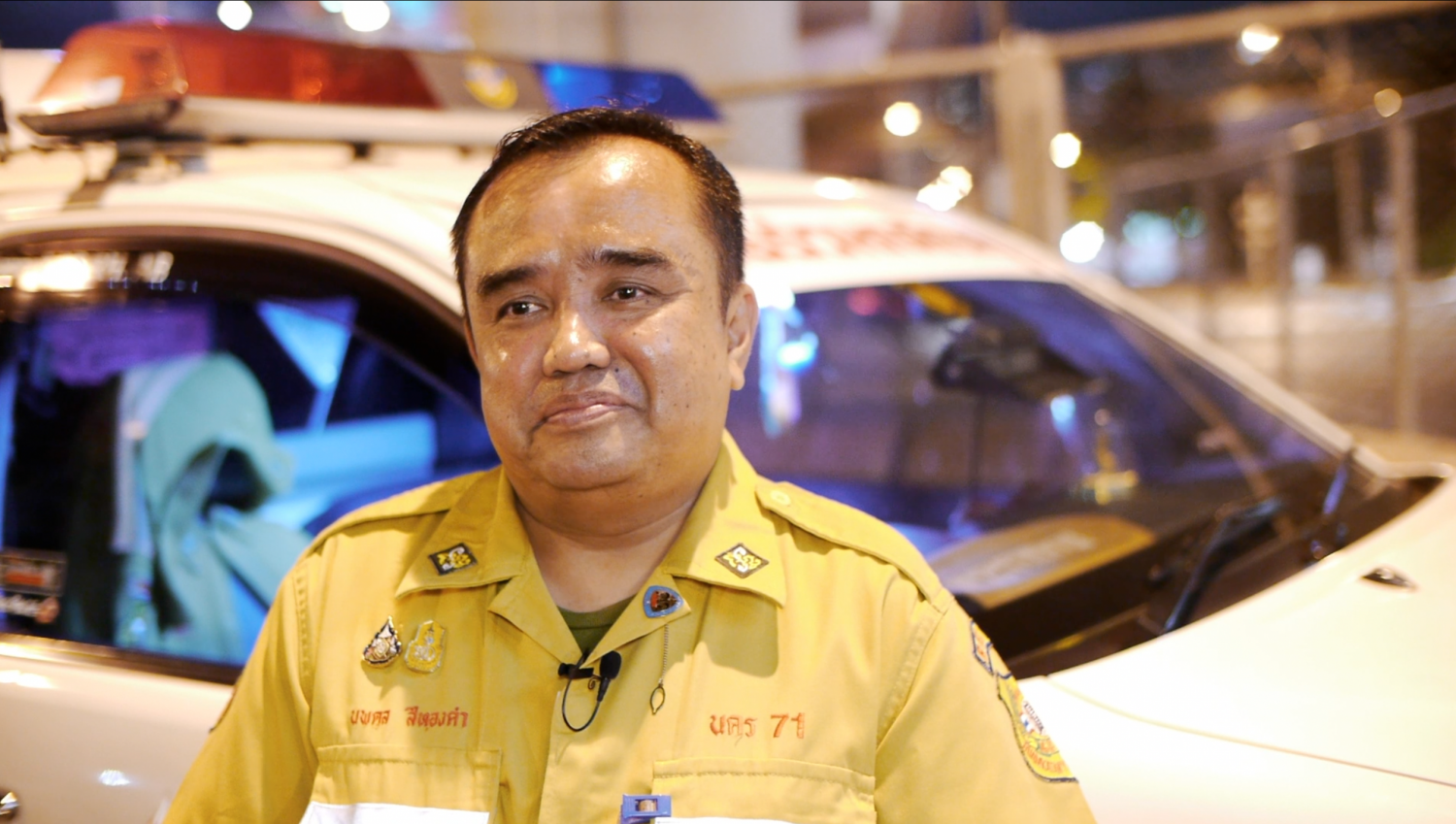