The Queen Sirikit Museum of Textiles is travelling back in time to when King Chulalongkorn fell in love with Javanese culture during his visits to Indonesia and brought home 307 of the finest batiks as keepsakes.

The exhibition "A Royal Treasure: The Javanese Batik Collection Of King Chulalongkorn Of Siam" showcases some of these precious textiles that have been stored in the Treasury of the Inner Court of the Grand Palace since the king's passing in 1910.

The exhibition is presented in three rotations. The first started on Nov 1, 2018. The second collection is on view now until midyear to mark the 70th anniversary of diplomatic relations between Thailand and Indonesia. The last collection will be showcased beginning in September. 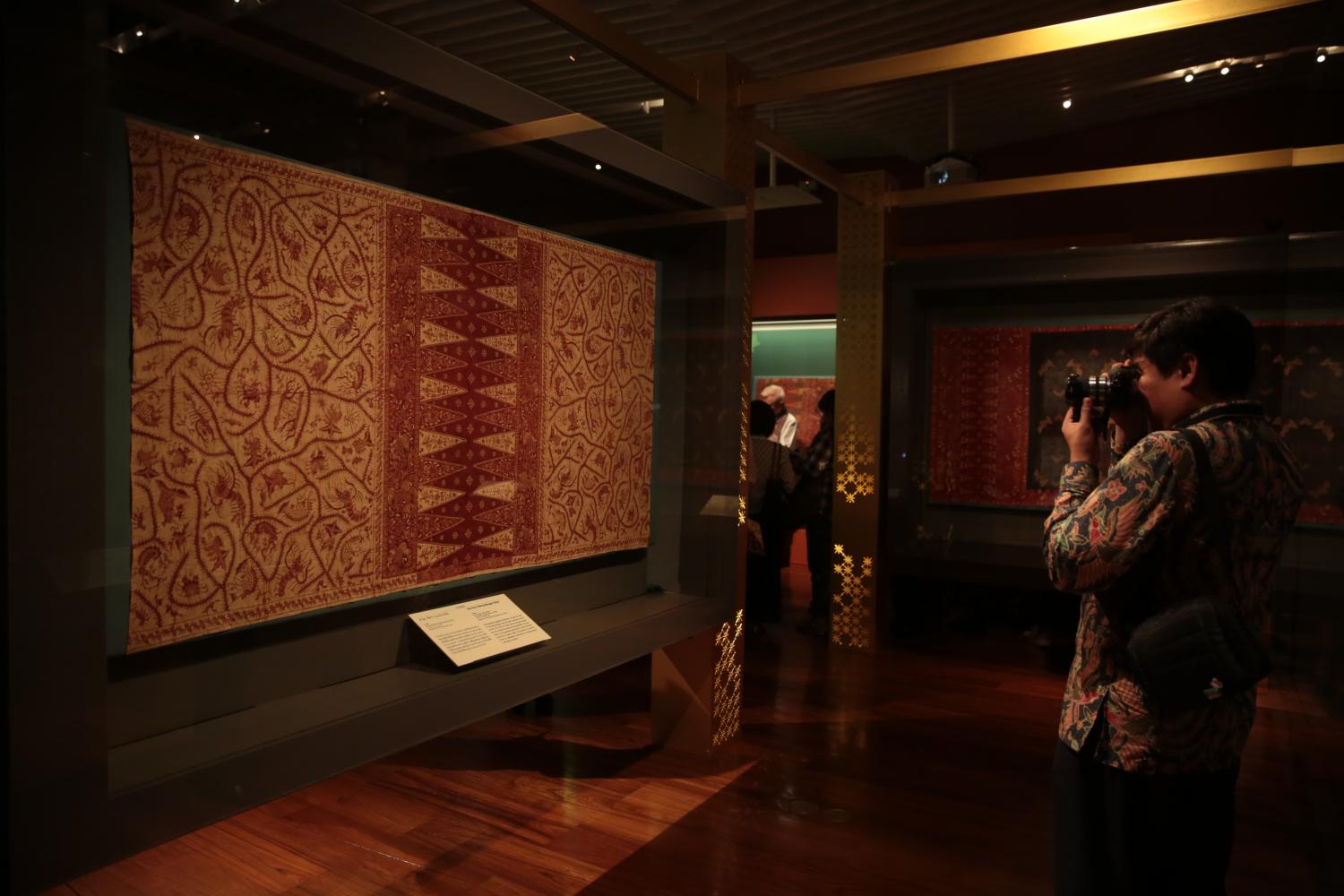 Above A batik in Bang Bangan style from Lasem.

"King Chulalongkorn travelled to Indonesia three times -- in 1870, 1896 and 1901. The second rotation coincides with the celebration of the 70th anniversary of diplomatic relations between Thailand and Indonesia. Batiks reflect beautiful Javanese traditions," said Thanphuying Charungjit Teekara, private secretary of Her Majesty Queen Sirikit the Queen Mother, who presided over the recent opening ceremony.

This project began in 2014 after the late King Bhumibol granted permission to the Queen Sirikit Museum of Textiles to research and exhibit this extraordinary collection with an aim to shed light on the life of King Rama V and educate people about Javanese batik, which was designated as a Unesco Intangible Cultural Heritage of Indonesia in 2009.

"During his journey to Java, King Chulalongkorn bought a large number of batiks, with some offered as a gift. Thus, we travelled to Indonesia and attended the batik workshops in many cities to learn about batik production houses and the history of Javanese costume traditions," said Piyavara Teekara Natenoi, director of the Queen Sirikit Museum of Textiles.

"In October, we will arrange a trip to trace King Chulalongkorn's footsteps for those interested in history. The city tour programme includes the National Museum of Indonesia, the Palace of Yogyakarta, Surakarta Hadiningrat Royal Palace, Jakarta Textile Museum and Museum Batik Dana Hadi in Surakarta." 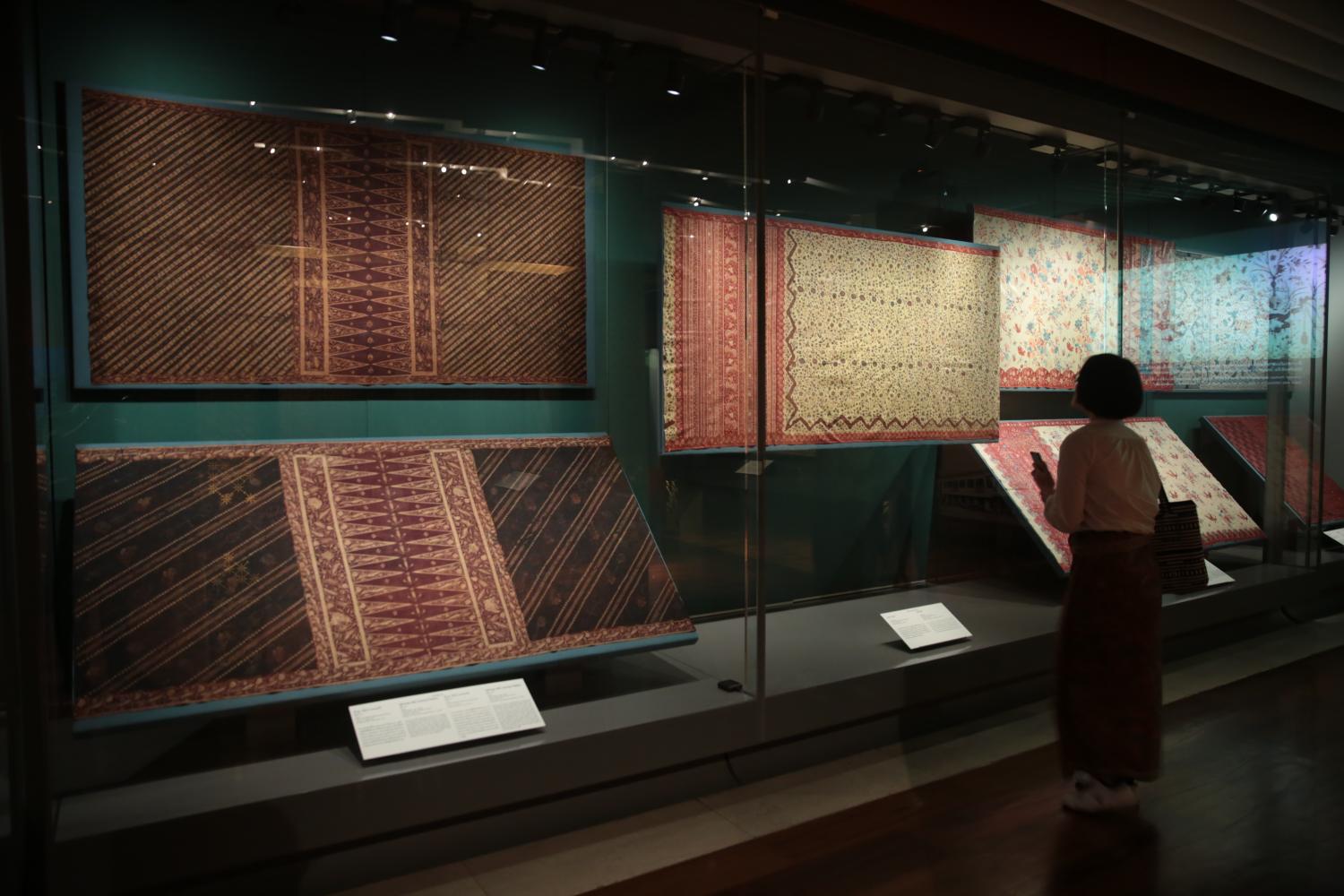 The batiks in several designs reflect the multiculturalism in the northern coast of Central Java and West Java.

The exhibition is divided into two zones to highlight on the traditional batik-making process, regional styles and symbolic meaning of batik imagery. On display are 37 pieces, ranging from sarung, tubular hip wrappers (kain panjang), longer hip wrappers, headbands (ikat kepala) and an example of the Sirikit batik pattern.

Back in 1871, King Chulalongkorn made his first and only official visit to Java. He spent 15 days travelling to several places and learned how the Dutch developed the island of Java with advanced Western technology.

The first room boasts a wide selection of hand-drawn cotton batiks from a provenance in West Java that mingles the local wisdom and foreign designs from India, Persia and China. There's also some samples of court batiks and popular styles from Central Java fashioned out of first-class materials and craftsmanship.

She was also recognised for a special colour palette called Prankamon green achieved by brushing tan dye over blue. King Rama V got five samples from her workshop. Visitors can see a striking red sarung depicting Garden of Eden imagery, where birds, squirrels, butterflies, monkeys and centipedes live in a lush landscape of grapevines and flowers.

"The batiks from the Franquemont production house are unique. They mostly come in green, tan and red. We found some pictures of her batiks in the National Archives of Thailand," said museum curator Sarttarat Muddin. 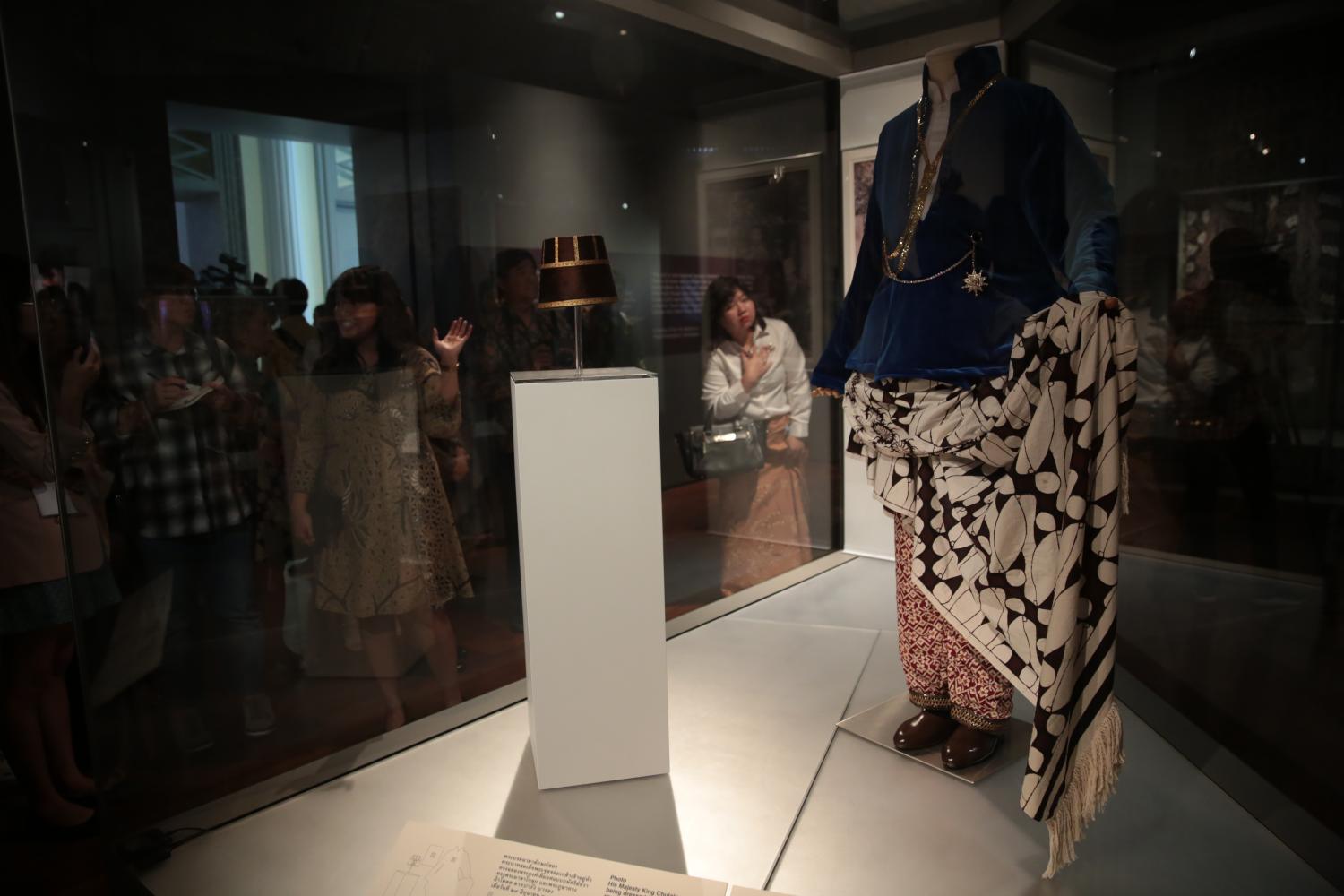 King Chulalongkorn amassed the wide collection of extraordinary batiks from Yogyakarta and Surakarta during his journey.

Influenced by Chinese culture, Lasem batik used a unique rich red colour and adhered to Chinese iconography. For example, a Bang Bangan-style sarung narrated a Confucian scholar riding a horse and waving his hands on his return home after he passed state examinations and became a prestigious civil servant. This imagery represents a wish for sons.

"Water in Lasem is rich in ore so the batiks come in unique red. Most artisans are Chinese. They created a collection of batiks with auspicious motifs to bless their sons," Sarttarat said.

Located on the north coast of Central Java, Pekalongan has been a hub for Chinese, European and Muslim descendants who produced batiks in different styles. The sarung designed by A.J.F. Jans is a highlight. It is a perfect mixture of late Victorian artistic conventions and European art nouveau style, featuring floral wreaths, cupids and general ornaments.

"Dutch batik artist A.J.F. Jans was among the first to sign her products. Her textiles reflected Western culture through the pastel-coloured floral bouquets, birds, bows, baskets and wreaths. King Rama V didn't visit there but bought some Jans textiles from traders in Bandung," Sarttarat explained.

King Chulalongkorn amassed the wide collection of extraordinary batiks from Yogyakarta and Surakarta during his journey.

In 1896 and 1901, King Rama V returned to Java and explored Cirebon, Garut, Yogyakarta and Surakarta. With a long history of international sea trade, Cirebon has been the best batik centre in West Java, with creative workshops run by Sino-Indonesians.

There, the batiks boasted refined Chinese motifs on a background dyed in dark shades. For example, a bride would wear blue batik when leaving her home to mourn the loss of her family. On display is a headcloth (ikat kepala), the only batik in the royal collection that still retains its gold leaf.

The western town of Garut was famous for batik with a background in pale-yellow called gumading, on which fine patterns in brick red and bright blue were painted. Some Garut batiks also presented the "burnt toast" effect when lighter dye bleeds slightly in surrounding areas. 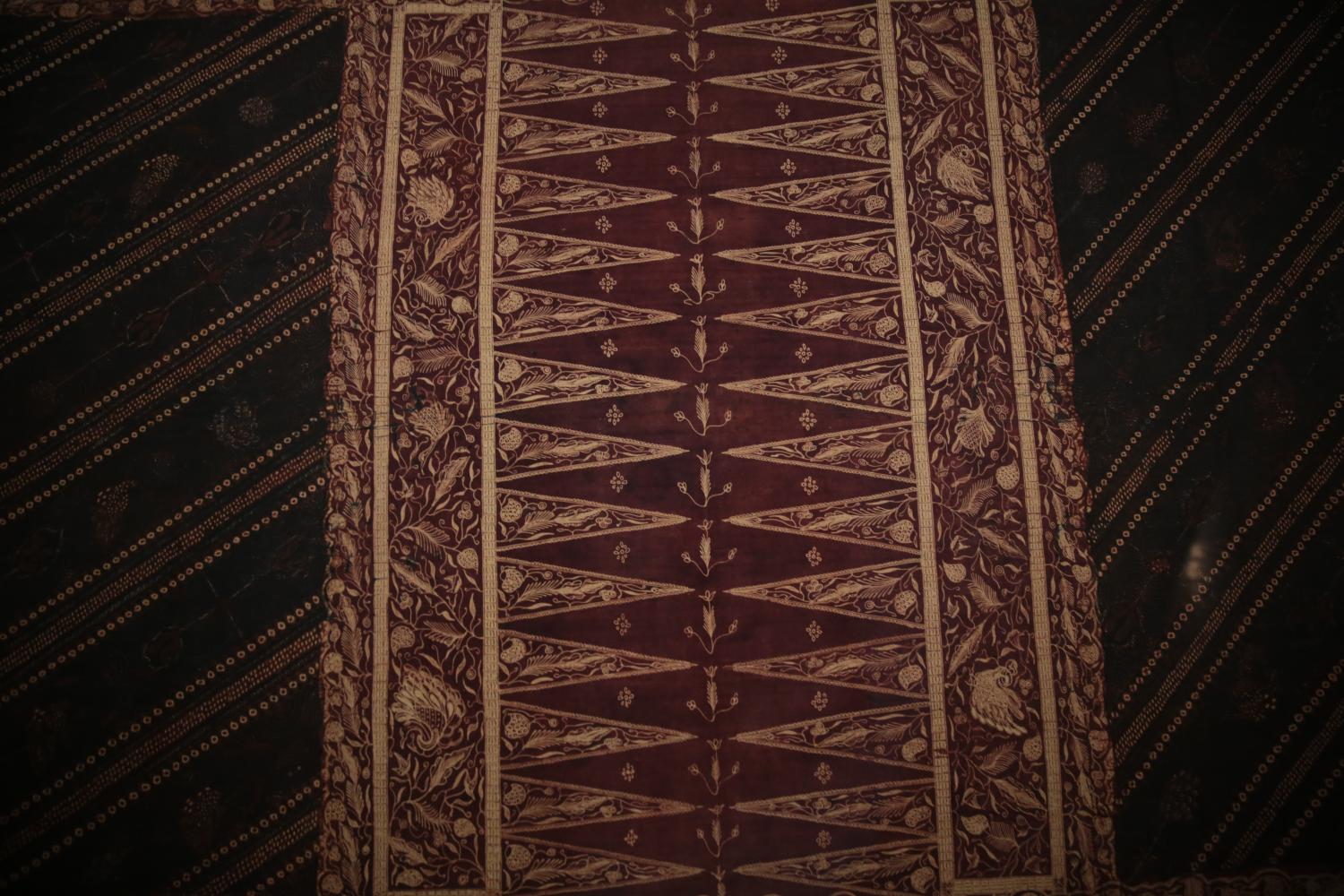 The next room showcases an eye-catching edition of royal court batiks from Yogyakarta and Surakarta. Yogyakarta in Central Java created batiks with geometric patterns, cosmic landscapes of scrolling vegetation, the Garuda (a Hindu bird-god) and nagas (a snake deity), while the ground came in pure white.

The sarung with mikado pattern is a masterpiece from Yogyakarta, influenced by Japanese art that broadened its influences to Java at the end of the 19th century. This batik sample is adorned with Japanese fans in different sizes and designs, while the background is filled with a traditional Kawung pattern.

Alongside is the striking hip wrapper in Sirikit design. Full of flowers to represent the beauty of Her Majesty Queen Sirikit the Queen Mother, it was created in 1960 to mark Their Majesties' visit to Indonesia. 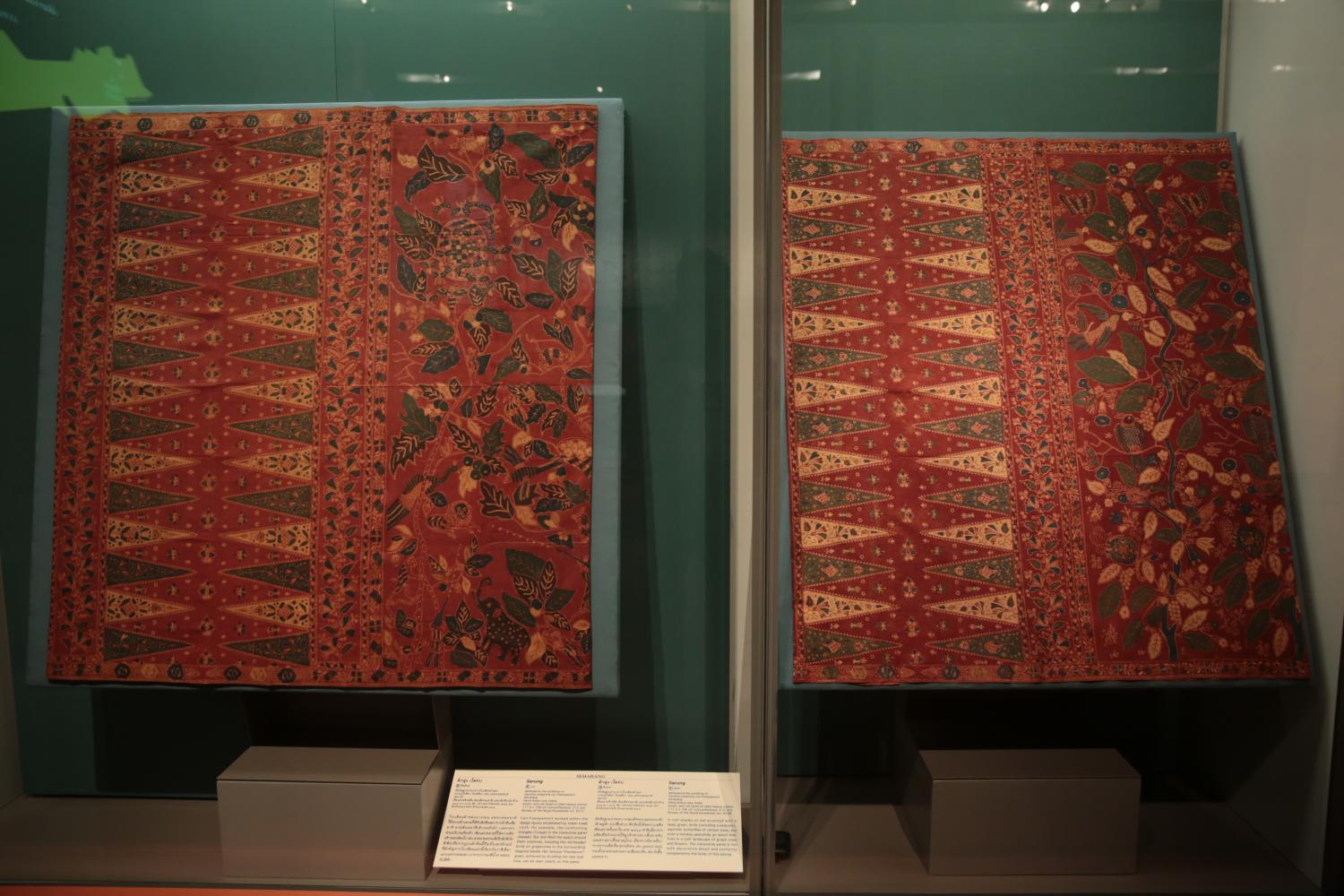 The batiks from Surakarta are unique in a colour palette of yellow-brown and dark blue, with tiny motifs painted on a yellowish ground. The Surakarta court textiles are mostly graced with elephants, symbolising royal power.

Popular with the Surakarta court, Seme design is all about stylised flora and fauna, while a variety of creatures like the elephant used to represent royal power.

One sample is a sarung with a Semen Sidorojo pattern that is believed to have been made in the 18th century -- after Mataram was divided into Surakarta and Yogyakarta. It has a huge diamond-shaped enclosure, adorned with such animal motifs as birds, bugs, blossoms, Garuda's wing and a Tree of Life that symbolise protection.