While a Thai university lecturer was studying in the UK, she bought Asian ceramics from an antique market and shipped them to Thailand. However, some of them broke during transport. Most people would have no choice but to throw away their beautiful ceramics. Fortunately, the lecturer is a friend of product designer Sumanatsya Voharn, who knows kintsugi, a prominent Japanese mending technique. The broken ceramics were repaired and a plate from the set was named East West Journey, which is currently on display along with 18 other ceramic items at the exhibition "Rak: An Assemble Collective" at SAC Gallery.

"I think ceramic wares, which are repaired by Sumanatsya using kintsugi techniques, are art. There were ceramic teacups on which she used wood to replace missing pieces and fused wood and ceramic together. Her work created a new form of art. The golden adhesive creates gold lines along the cracks like beautiful drawings. Some people ask Sumanatsya to repair their inexpensive pottery, because the pottery is meaningful and they have memories about it. After ceramic ware is repaired, its price increases a lot because people value its new identity more," explained Chol Janepraphaphan, the curator of SAC Gallery.

"Rak in the exhibition title has a double meaning. It refers to lacquer and affection. 'Collective' refers to displayed items that I collected and some have stories behind them. Barcelona Broken Piece is a ceramic sugar container that I found while I was at a second-hand market in Barcelona, and Lampang Broken Waste are broken bowls that I got from a ceramic factory in Lampang," said Sumanatsya.

Sumanatsya, a lecturer at the Department of Design, Faculty of Fine Arts, Chiang Mai University, learned about kintsugi when she received a doctoral scholarship from the Hitachi Foundation and researched Japanese lacquer, or urushi, in Japan. She was amazed to see how kintsugi repaired a ceramic cup and asked her Japanese instructor Prof Sakurako Matsushima to teach the technique to her. 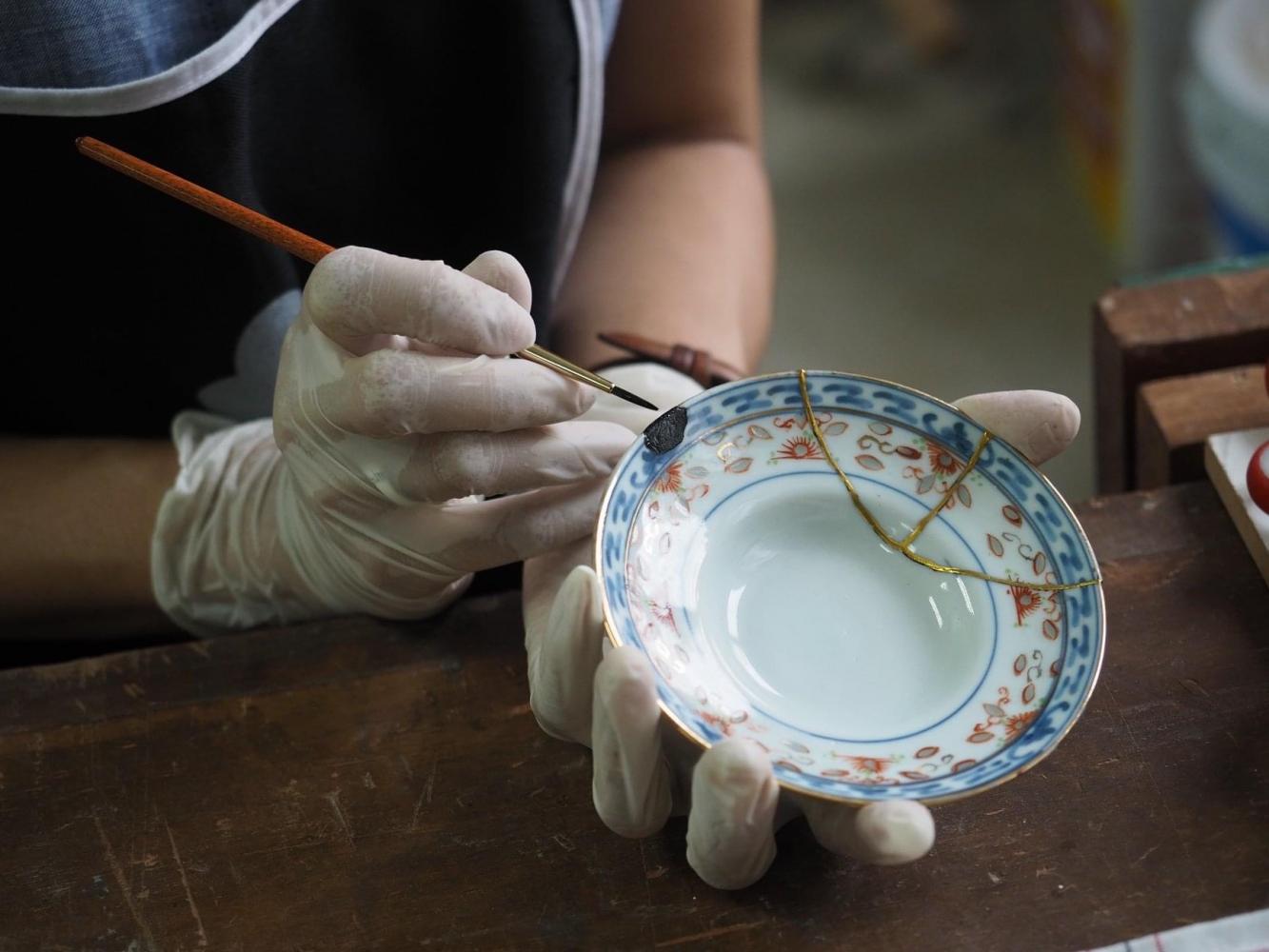 "I was surprised to know there was a technique to repair ceramic and glass. In Japanese culture, they think repaired items are things that are valuable in terms of memory. Kintsugi techniques can bring back broken items to our life. They probably aren't the same, but they are valuable and reveal new aspects. Many people like the ceramic cups that I repaired with wood because they look different from other cups," said Sumanatsya.

"Kintsugi relates to a life philosophy. When something bad happens in our lives, some don't know how to handle or go through it. Similarly, when a cup is broken, most people don't know what to do, but to throw it away. Kintsugi reminds us that items can be fixed. Hence, when we encounter problems, we must be conscious and try to resolve the problem, so our life can get back on track," Chol added.

Traditional kintsugi was created late in the 15th century during the reign of Shogun Ashikaga Yoshimasa. The original process took at least six weeks. To speed up the process, some people use epoxy and glue mixed with gold powder to fix the broken objects. After the process is completed, the repaired items will have the beautiful gold lines of traditional kintsugi, but the items can't be used to contain food due to the epoxy. The modern technique is good only for displaying items. 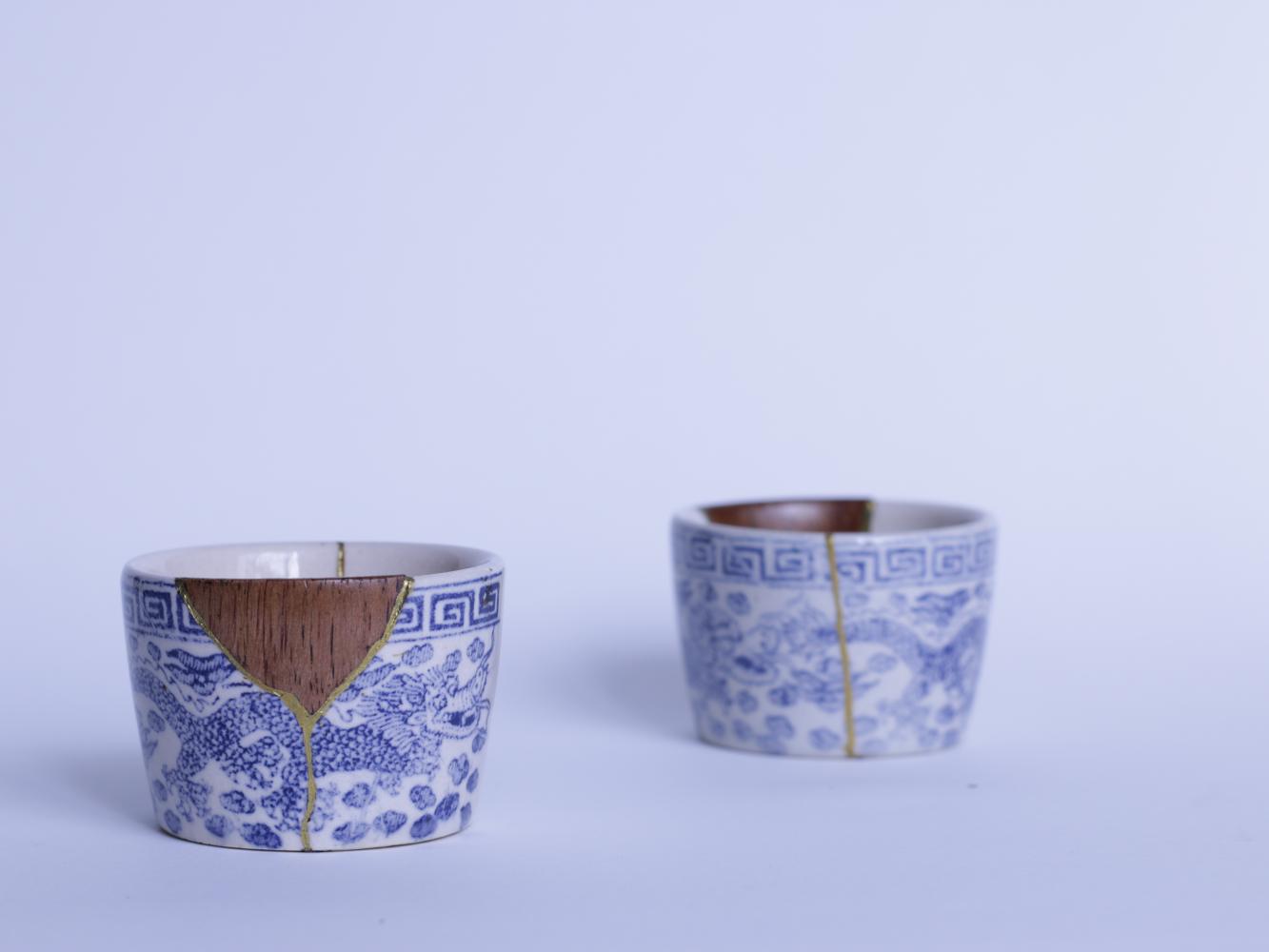 The wood is used to replace missing pieces. (Photos courtesy of SAC Gallery)

The kintsugi that Sumanatsya learned four years ago in Japan involved traditional techniques. She has to make glue by mixing lacquer with wheat flour and tonoko powder, a hard Japanese soil from Wajima city.

"Tonoko powder has a similar texture to ceramics. We use the powder to seal the cracks. Then, we have to make the crack smooth by coating the object with a mixture of tonoko powder and urushi. The next step is to apply urushi because it has antibacterial properties to make the cracks clean and it is of food grade, so the item is safe for containing food. The final process is to add red lacquer and gold powder. Kintsugi isn't difficult, but people must understand that craftwork takes time because we use natural materials, which can be affected by moisture or heat," explained Sumanatsya.

"After repairing with kintsugi, the item can be used for food, but can't be washed in a machine and can't be put in a microwave. It is like a broken arm or leg which must be carefully nurtured," Sumanatsya added. 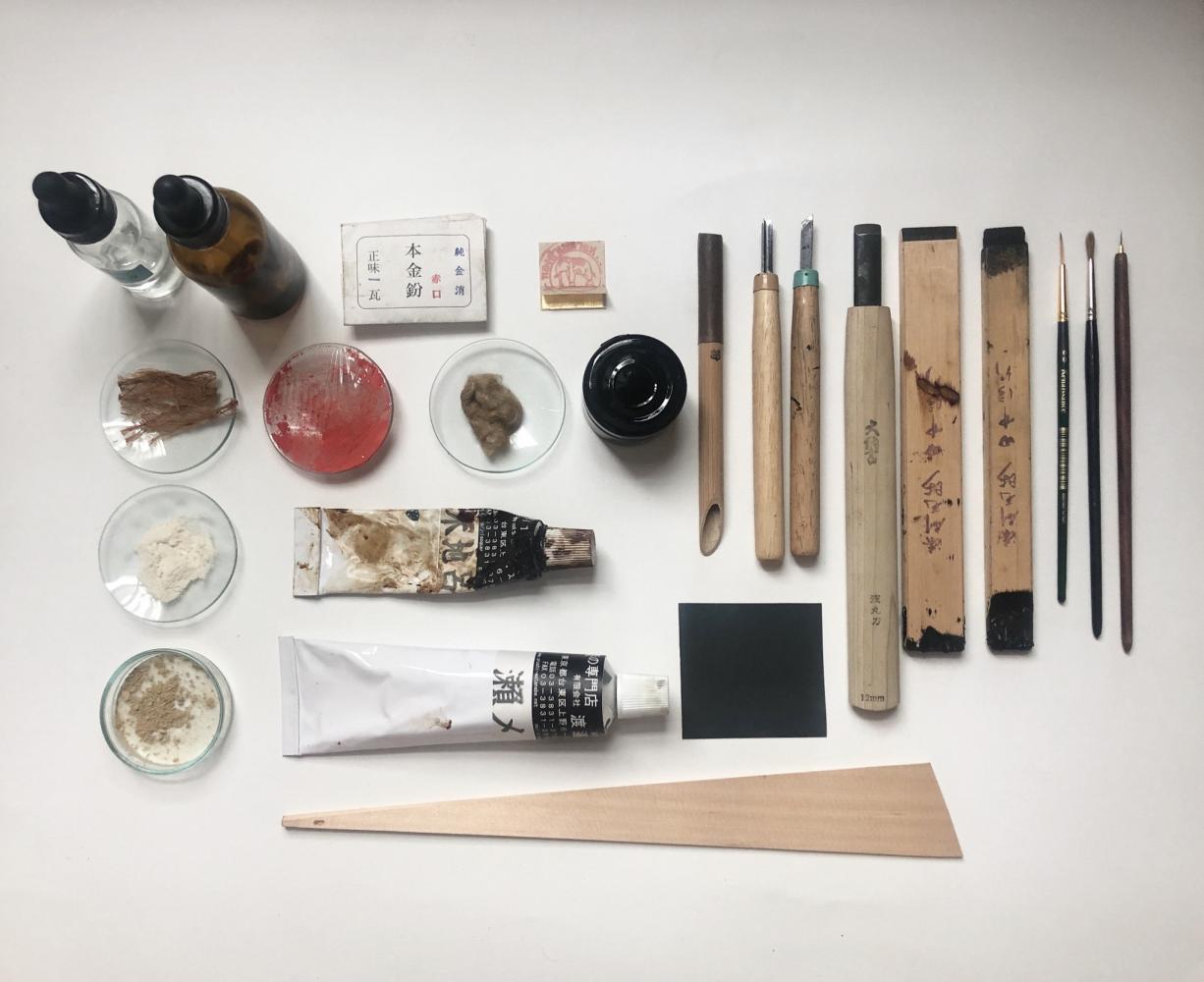 After learning original kintsugi, Sumanatsya carried out several experiments to develop technique by herself.

"I tried to use Thai lacquer, Thai gold leaf, mulberry paper and cotton with kintsugi. I learned that Thai lacquer is hard, but brittle. Urushi or Japanese lacquer is sticky and soft, so it blends with paint colours easier than Thai lacquer. In my work, I use Chinese lacquer which has been through a Japanese process. The Chinese and Japanese lacquer are from the same tree species. I use Thai lacquer in the rainy season because it isn't so good in the heat. When I mended a ceramic cup with wood, I had to use old wood which is stable. It doesn't expand or shrink much due to hot and cold weather," said Sumanatsya.

Sumanatsya found that people usually questioned if kintsugi actually works. They also wonder if repaired items can be used as regular containers. She hopes that the exhibition will attract people to be interested in kintsugi and understand more about lacquer. 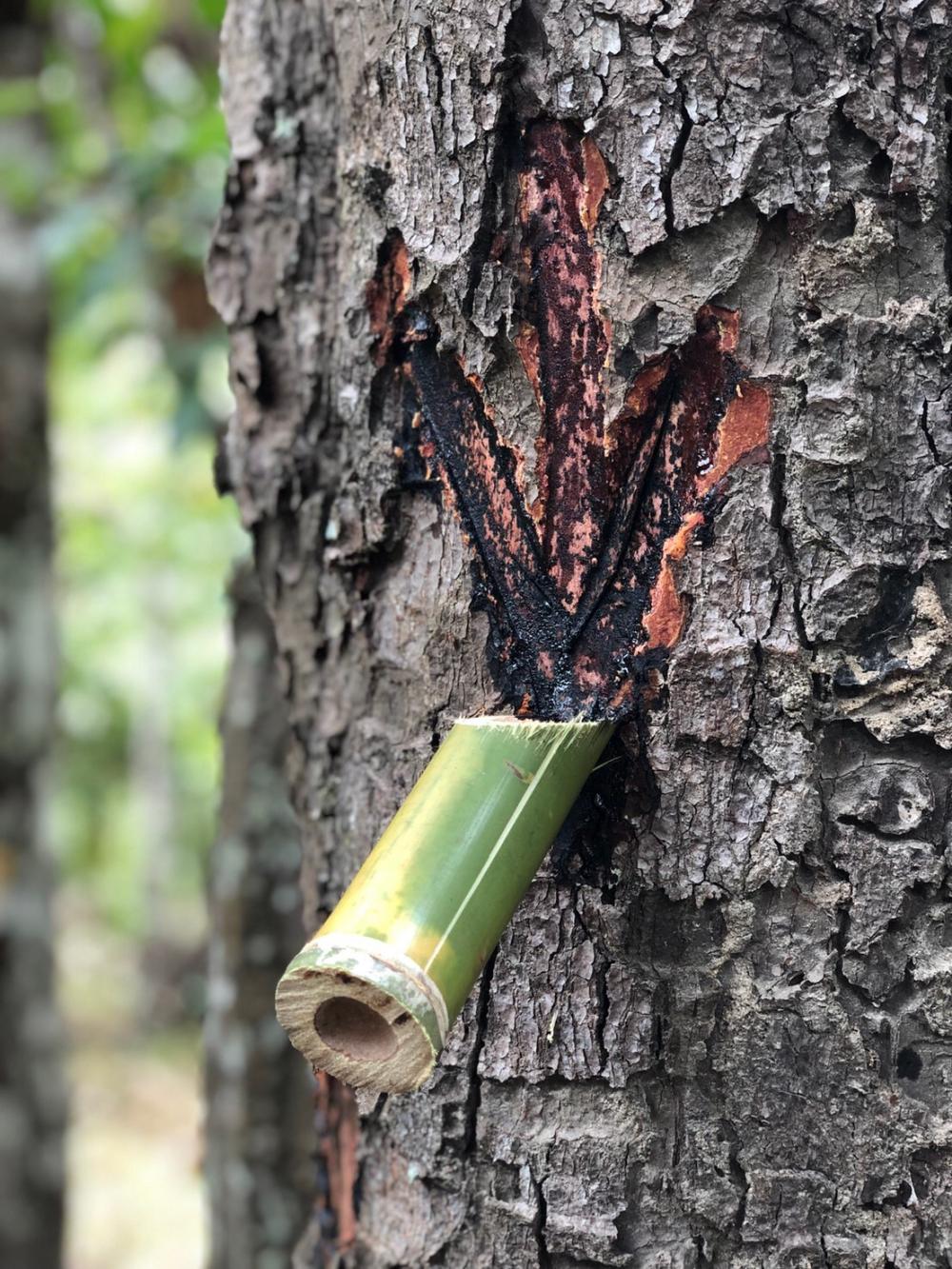 Collecting lacquer from a tree. 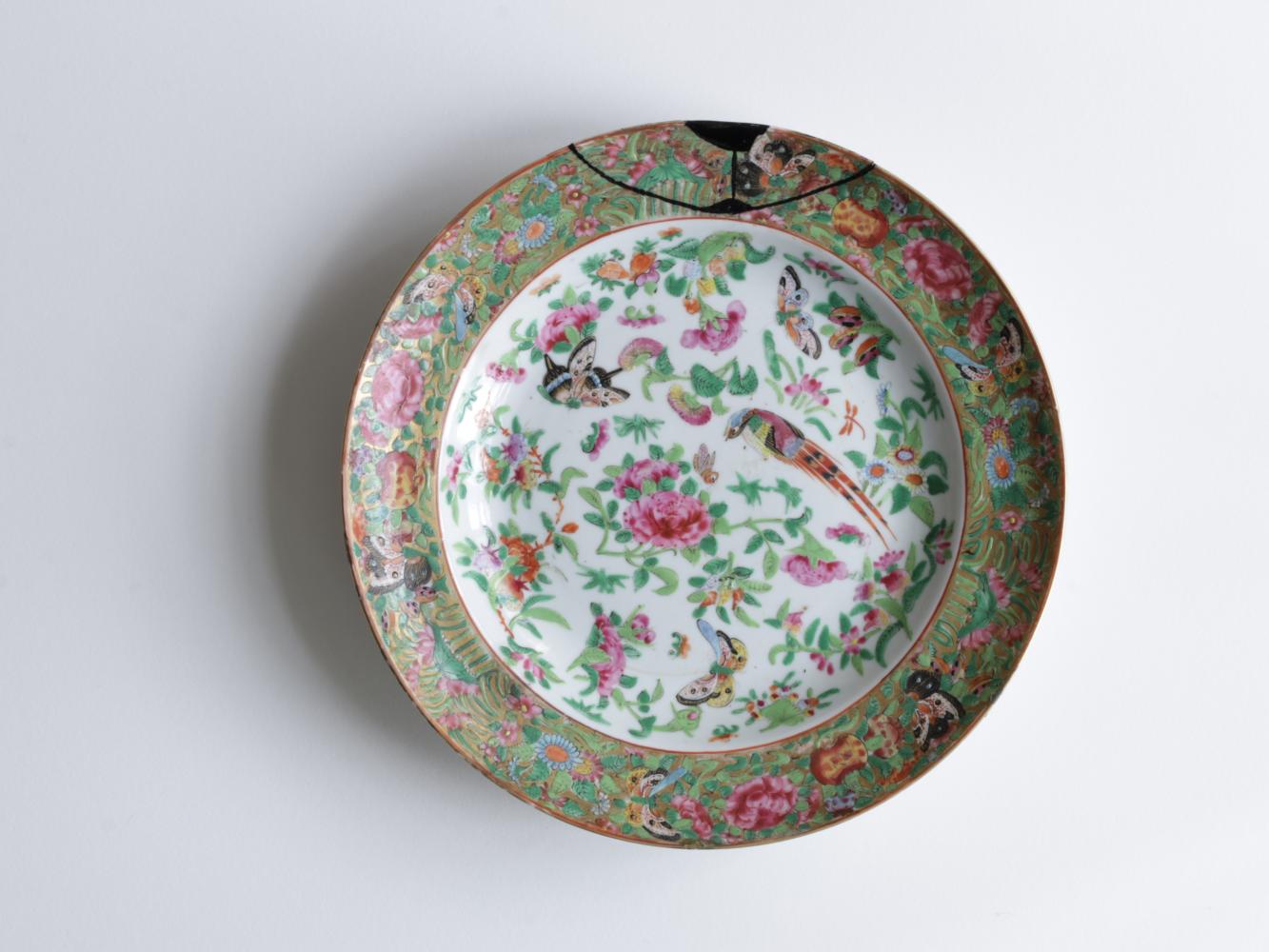 East West Journey, a broken plate from the UK. 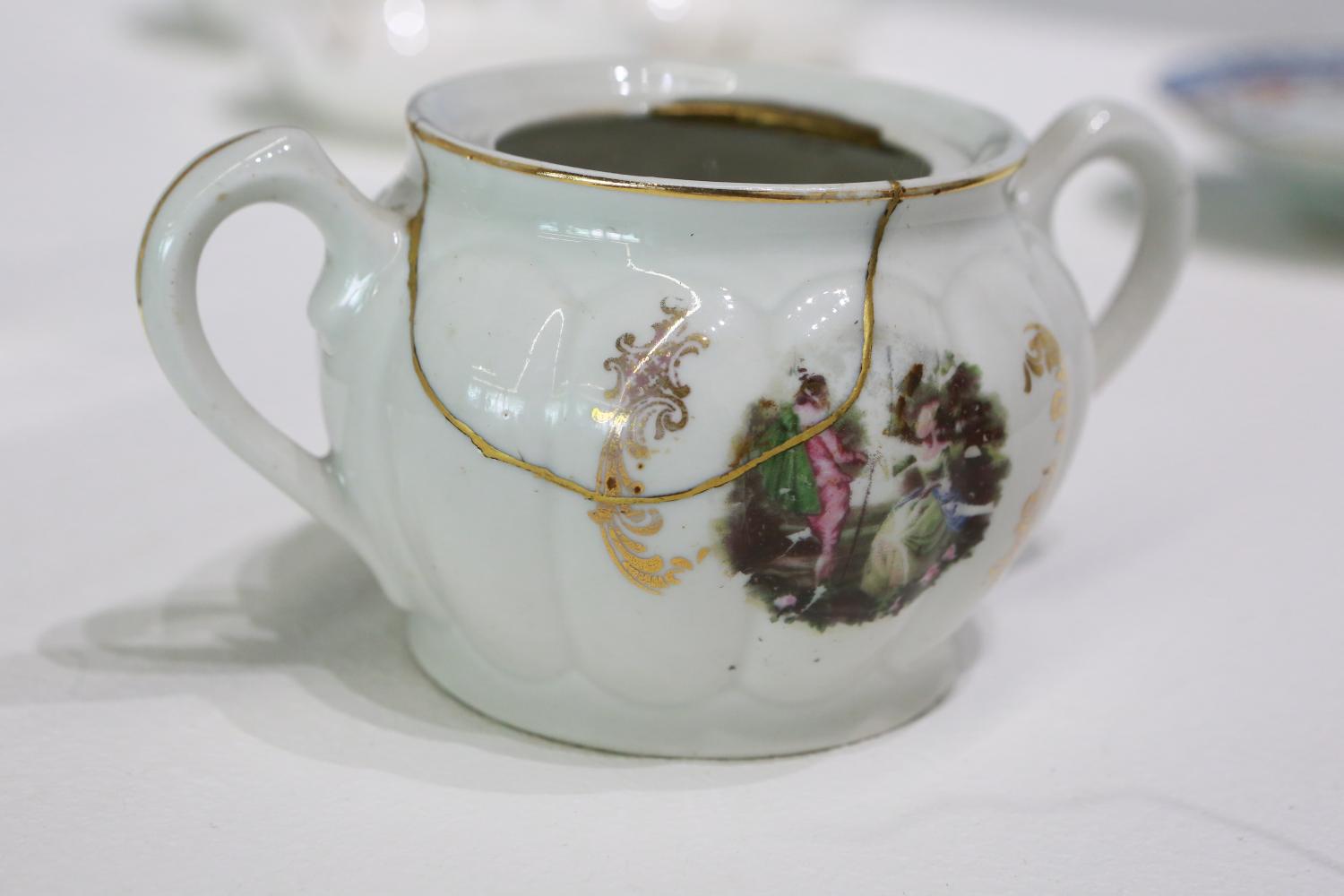 Barcelona Broken Piece was from a Barcelona second-hand market.

The exhibition, 'Rak: An Assemble Collective'