A grand return to near normal
Life
Arts & Entertainment

A grand return to near normal

All tickets were sold out for the Royal Bangkok Symphony Orchestra's concert late last month in the Main Hall of the Thailand Cultural Centre, the first they have performed there since January.

There was a highly sophisticated French theme to the evening's proceedings. Jacques Ibert's popular Divertissement was followed by the Introduction And Rondo Capriccioso by Camille Saint-Saëns for violin and orchestra, with RBSO concertmaster Bing Han appearing here as soloist. Han returned to also perform Pablo de Sarasate's challenging Carmen Fantasy. Although Sarasate was Spanish, not French, he spent much of his life in France (particularly Paris), and the musical material of this work does of course come directly from French composer Bizet's opera Carmen. To conclude this most enjoyable concert, conductor Vanich Potavanich and the RBSO then gave a scintillating account of Bizet's own youthful Symphony No.1 In C Major.

Ibert's delightful 1930 work is indeed a diversion of a hugely entertaining nature, with a sparkling Introduction that casts a celebratory atmosphere and mood, like a miniature comic-opera overture. The entire world as a whole had in fact just entered The Great Depression -- but this music seems to thumb its nose at this stark reality and continues to celebrate the partying spirit of the Roaring Twenties unabated. Only 20 players are required for Divertissement, yet the reduced chamber-sized forces of the RBSO got totally involved with the festive, sometimes jazzy and often irreverent spirit of the score. Three violins, two violas, two cellos, one double-bass, piccolo, flute, clarinet, bassoon, contrabassoon, horn, trumpet, trombone, percussion, celesta and piano duly filled the large TCC with a kaleidoscope of intriguing timbres and sound effects.

Cortège (Procession) had ethereal arpeggiated violin solo harmonics, and later even a brief echo of Stravinsky's Le Sacre Du Printemps was evoked. Meanwhile, the seemingly random quote of Mendelssohn's Wedding March always encourages a wry smile, as does the "wrong note" Valse, a quite haphazard piano cadenza, and the perfectly unsubtle use of a sport whistle in the Finale -- all very fin de siècle Paris! 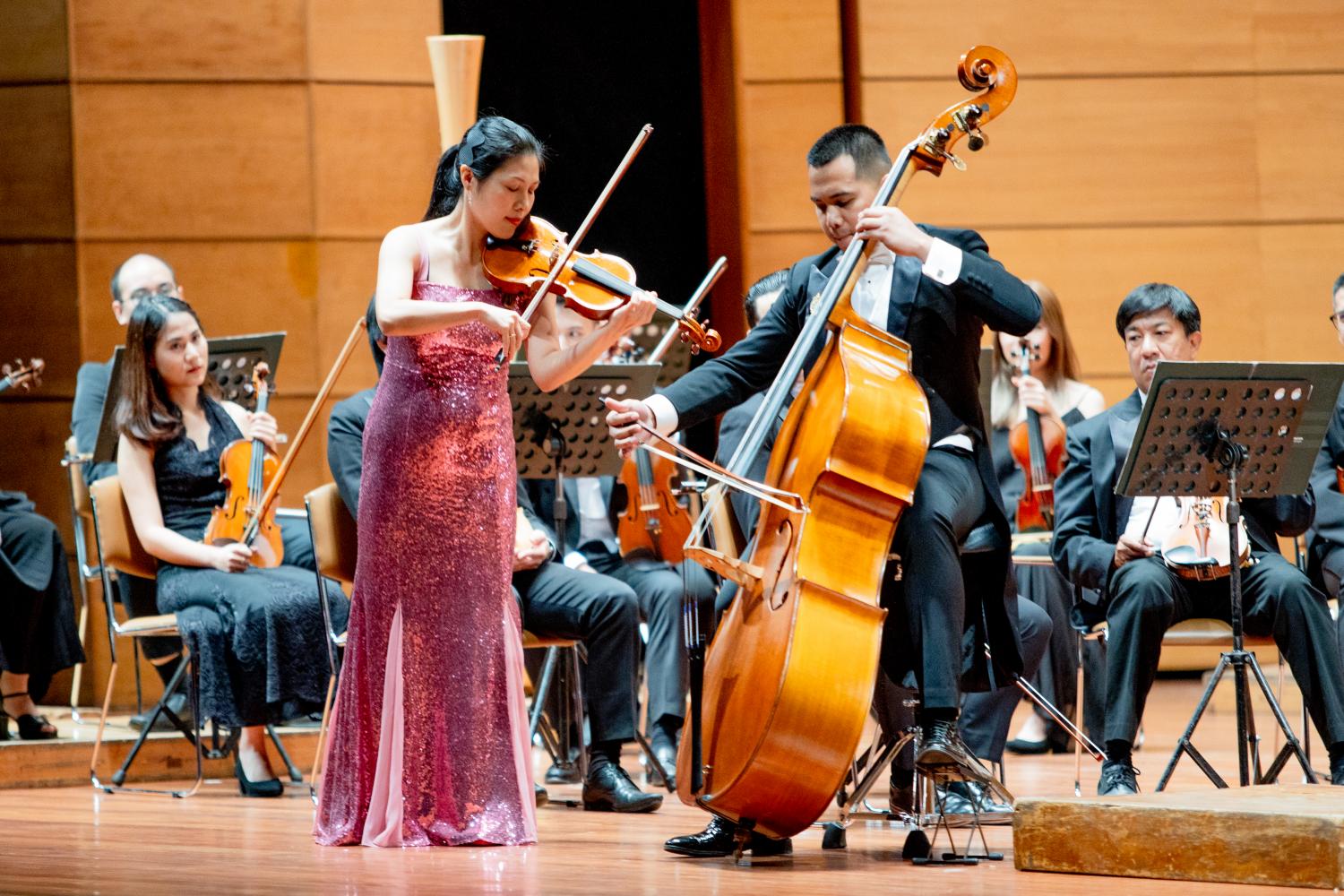 The RBSO can feel justly proud of having a concertmaster capable of performing convincing renditions of both the Introduction And Rondo Capriccioso and the Carmen Fantasy in the same concert. Bing Han, in her leading role two years now, began violin studies at five at the Tianjin Conservatory of Music in China, then continuing in Beijing. At 17 she moved to the prestigious Franz Liszt Academy in Budapest, then finishing training in Maastricht in the Netherlands.

Camille Saint-Saëns composed the gorgeous Introduction And Rondo Capriccioso for Sarasate in 1870, and has ever since been regarded a benchmark by which to judge not only a violinist's technical capability, but also their innate musicality. Han captured the melancholic nature of the opening Andante Malinconico well, with a sweet singing tone and sufficient vibrato to successfully emulate the bel canto style. An immediately appealing work in which sheer brilliance alternates with elegant reflectiveness, in this slow introduction the rhapsodic violin solo was given a solid accompaniment of pizzicato by the strings, suggesting the effect of a single guitar. Then the lively Rondo opened with the captivating principal refrain, an arabesque figuration that led to brilliant technical episodes, amply displaying the virtuosity of Han. This very accomplished performance concluded in a still livelier Coda, with flashing scales and rapid arpeggios for the violin dispatched impressively here by the soloist.

Pablo de Sarasate's own Carmen Fantasy of 1883 was of course written for himself to perform on tour, and its magnificent, dazzling writing represents the pinnacle of the unique style that Sarasate established with his playing. Much of his music is discounted as being merely a technical platform for the soloist. It is not so with this Fantasy, for in the technical challenges of the music lies the drama associated with the themes of the opera. Comprised of an Introduction and four sections, the fantasy weaves through the allure and passion of Carmen with the violin singing, flirting and dancing illicitly. It contains passages of passion, rage, love, betrayal, deceit, whimsy, wit and excitement. Above all else it should be revelled in and appreciated for its simple and exhilarating form. In all of these departments Bing Han delivered the goods superbly, with her admirable, secure technical facility matched by an endearing expressiveness that absolutely communicated the essence of the well-known showpiece.

Of George Bizet's two symphonies, Symphony No.1 In C Major composed in 1855 when he was only 17 is today regarded as his most successful. The work is full of invention and spontaneity, but did not receive its first performance until 80 years later, in 1935, when Felix Weingartner discovered the score in Paris. It certainly is a fresh, ingenious and uninhibited piece, something like a French version of Schubert in its attractive melodic writing. And Like Mendelssohn's early music, this is more than mere juvenilia. Potavanich and the RBSO presented this work so expertly, and with so much committed vigour, that the audience felt compelled to applaud enthusiastically after each of the four movements. Truly a triumph.

A promising development in the fight against Covid