Bob, an office worker, was terrified of dying but he eventually got infected with the novel coronavirus and died. Afterwards, he turned into a zombie.

In order to get used to the fear of death, Bob experiments many ways to die such as jumping off a high building, provoking authorities to shoot him, becoming a T-rex's meal and driving a vehicle into the sea where a shark awaits. With his immortal zombie life, Bob hopes to understand the saying "Remember That You Will Die".

Bob is a male character in the art exhibition "I'll Be Back" by Preyawit Nilachulaka aka Palm Instinct who is a painter and frontman of the rock band, Instinct. The idea of Bob was inspired by Preyawit's fear of dying alone since he and his wife chose to not have children.

"I am terrified of dying and think about it often because I am worried about what will happen before I die. At that time, if I am old, sick and live by myself, I will have no idea what to do. I believe that people are afraid of what they do not know. Everyone dies only once and nobody knows what happens after death. If we die and always come back to life, we may find a way to heal our fear of death. As a result, I created this collection. It is how I face my fear of death," explained Preyawit. 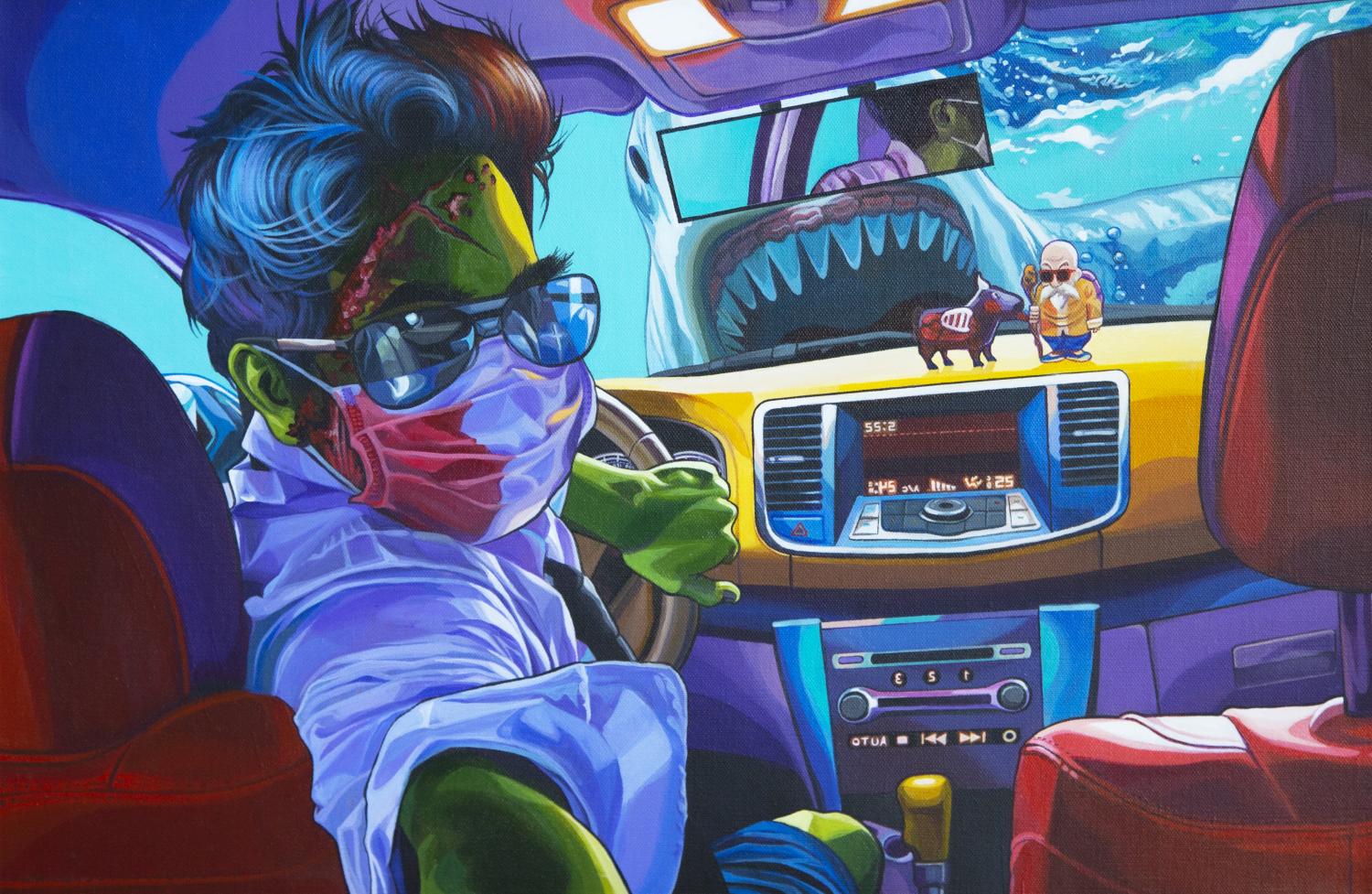 Due to his fear of death, Preyawit created three art collections. "I'll Be Back" is a painting collection while the two ongoing collections are conceptual art.

"The second collection is developed from the theme memento mori which is a Latin phrase meaning 'remember you must die'. In Buddhism, there is a practice of keeping in mind that death can happen anytime to any one of us. This mixed media collection was sparked by western art. The other installation collection was inspired by the concept of 'Kodokushi', a Japanese word referring to people who die alone and it takes a long time to discover their corpses," explained Preyawit

In "I'll Be Back", Preyawit creates 10 different scenes for Bob to kill himself, with some inspired by movies.

"I was looking for creative and unusual scenes for Bob to kill himself. In the painting, I'm Johnny Utah, Bob is in a tsunami that ravages New York, inspired by the movie, Armageddon. Say Cheese is a scene to depict misfortune, so Bob drives his car into the sea and suddenly sees a shark in front of him. Among the three collections with the theme of death, 'I'll Be Back' is the easiest to understand," said Preyawit. 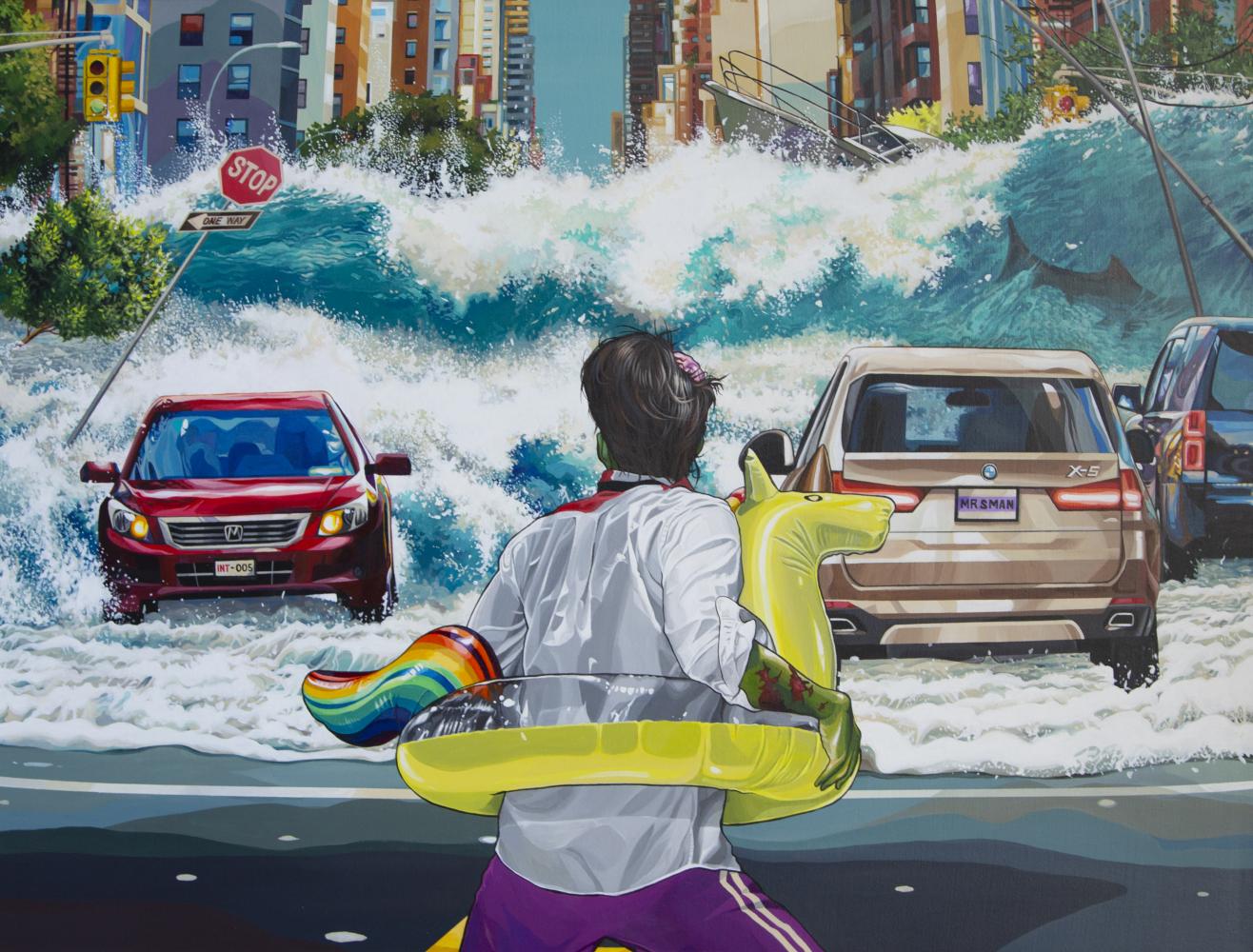 Preyawit began working on the character of Bob because he wanted to use art as a treatment for his fear of dying. After several months, the artist still did not get used to the idea of death.

"I have to involve myself with several things, not just painting Bob. While conducting research for each collection, I gained some thought from it. I read a book, La Peste by Albert Camus, which is about a pandemic. In the book, some people were terrified of the plague while some were not and some tried to take advantage of the situation. It is so similar to this Covid-19 situation. I learned that the person who has to die will die. It is an unavoidable fact," he said.

Preyawit and the band, Instinct, are renowned for hit songs like Prot Song Khrai Ma Rak Chan Thee (Please Send Someone To Love Me). Many people may not know that Preyawit was a painter before starting his singing career. This professional artist earned his bachelor's degree in painting from the Faculty of Fine and Applied Arts at Srinakharinwirot University. In the art industry, he is notable for paintings inspired by Japanese manga with a satirical theme. "Siam Rangers", is one of his most recognised collections since it satirised the police force. 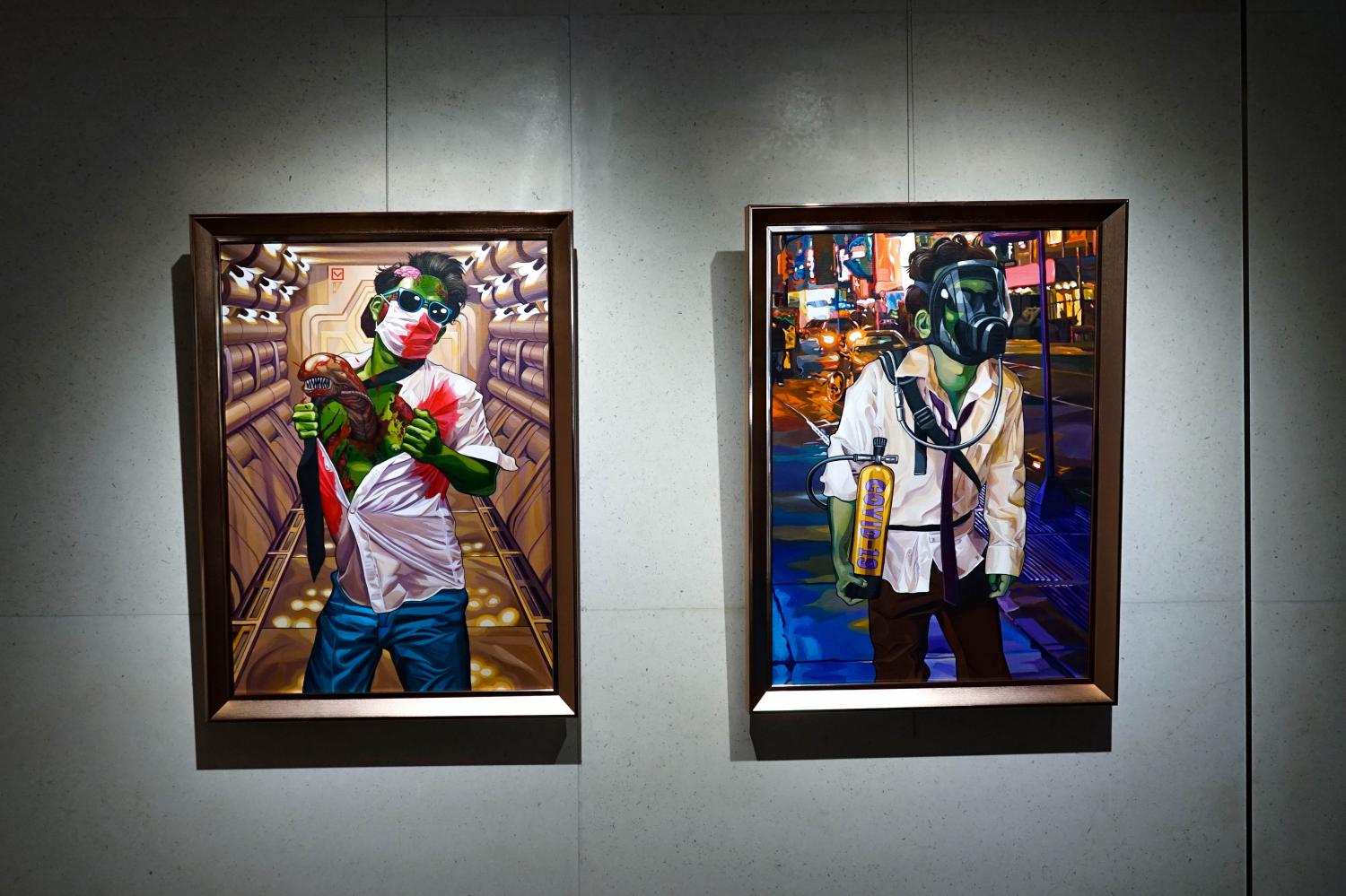 'I'll Be Back' portrays different ways Bob tries to kill himself. SAC Gallery

In June, when a major cryptocurrency exchange platform, Binance, opened its online marketplace with a category of NFT crypto art, Preyawit was invited to be one of its 100 creators. The artist developed some physical paintings from his two collections, "Siam Rangers" and "I'll Be Back", into digital art format for the Binance NFT Marketplace.

Preyawit has been interested in the global art industry and often posts updated news on his Facebook, @mr.sexmanhuhuhu. One interesting NFT art news is about an Italian artist, Salvatore Garau, who sold his invisible sculpture, I Am at US$18,000 (592,704 baht). One may wonder how an invisible art piece can be sold.

"It is conceptual art. It proves that an idea is valuable. In this case, the creator has been through experiences and is someone who has created art pieces before," Preyawit explained.

Two paintings from 'I'll Be Back' were created in digital art form for the Binance NFT Marketplace. Photo: binance.com

During the coronavirus pandemic, Preyawit focused on art, putting his singing career on hold since entertainment venues are closed. He said he became accustomed to being a full-time painter.

"I work on art, so I can feel alive. Everyone must have a reason to live. At a certain age, I probably will have to stop working as a singer but I can continue to work on paintings. The act of painting is like having a conversation with myself and a way to earn income. People feel alive when they are happy and I am happy to work on art," Preyawit said.

"I'll Be Back" runs at Rosewood Bangkok until Aug 30. Due to the Covid-19 situation, the exhibition can be viewed at tinyurl.com/54uytcu2 and facebook.com/mr.sexmanhuhuhu. Visit facebook.com/sacbangkok for more information.