Better late than never as they say. Cruella, Disney's latest live-action film featuring Emma Stone which premiered in the US in May and skipped theatrical release in Thailand after being postponed several times due to Covid-19, finally lands on Disney+ Hotstar today.

After finding out the film was made by Craig Gillespie, the man behind the 2017 award-winning film I, Tonya, I realised this would not be a typical lighthearted Disney family movie. Cruella is about the rebellious early days of one of cinema's most notorious fashionable villains -- the legendary Cruella de Vil -- and set in 1970s London amid the punk rock revolution. The story follows a young drifter named Estella Miller (Stone), a troublesome yet very clever girl who's determined to make a name for herself in the fashion world. After becoming an orphan from a young age, Estella meets and befriends a pair of young thieves, Jasper (Joel Fry) and Horace (Paul Walter Hauser), who appreciate her appetite for mischief. Together, they are able to make a living for themselves on London's streets. One day, Estella's flair for style catches the eye of Baroness von Hellman, played by Emma Thompson, a legendary fashion icon of that era. However, once their relationship sets in motion, a course of events cause Estella to embrace her wicked side and transform into this anti-hero persona known as Cruella.

To be honest, I don't really have high expectations for Disney's live-action franchise. Over the years, there have been some hits and also some misses. I thought films like Maleficent (2014) and Mulan (2020) were weak and that Disney should stick to animated films. So, I thought this would be yet another Disney film with a family theme, but surprisingly it's not. This movie has dark elements and it doesn't feel like Disney at all. Many people have compared it to The Devil Wears Prada and I can see the comparison, but there's a darker tinge to Cruella. We even have some Ocean's 11 vibes as there are a couple of heists in this movie. However, despite the comparisons, it's still a unique story within itself. But let's be honest, any movie involving women in fashion will be compared to The Devil Wears Prada anyway.

Filmmaker Craig Gillespie creates a great sense of mood and tone, which can be defined as bold, elegant and intoxicating. Just like in I, Tonya, this is another film that incorporates technical forms and designs and is stunning. Let's also not forget the tasteful way in which it adds popular pop and rock songs from the late 60s and early 70s from artists such as The Rolling Stones, The Zombies, Nancy Sinatra, Blondie, The Stooges and The Clash. There's also a punk vibe to the attitude and the aesthetic of the film. We can see obvious examples in Estella's fashion sense. Even the clothing store in London that she visits in the movie looks almost exactly like Vivienne Westwood's famous boutique SEX on King's Road from the 70s.

Cruella features two incredible performances by two Emma's. Starting off with the lead Emma Stone, she is definitely the right choice for the role and she owns it. She rocks that hairstyle and attitude and creates a character that has a lot of quirks. Sometimes she's endearing and sweet and at other times devious and dark. Her performance definitely makes this movie worthwhile, even if I think the premise doesn't measure up. If you liked her in films like La La Land (2016), Easy A (2010) or The Help (2011), Cruella is when her name shines the most. 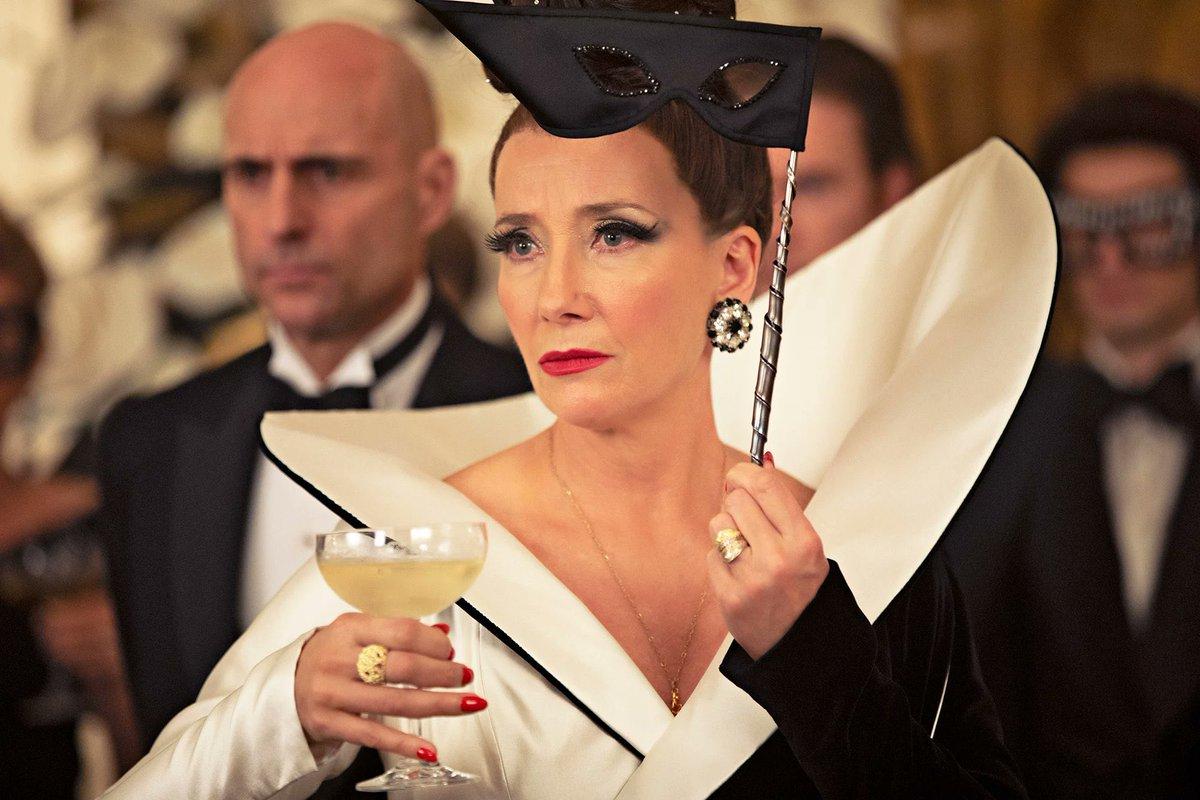 Emma Thompson's performance is also top-notch and she is definitely a scene-stealer every time she makes an appearance. She's one of the best Disney villains in a long time. I liked the mentor-student relationship between the young Estella and the Baroness. The desperation of Estella trying to impress her with designs and ideas for fashion is something that anyone can relate to. Meanwhile, Joel Fry and Paul Walter Hauser play Jasper and Horace and they are good additions to the cast as they add a sense of humanity and bring softness and humour to the story that I think is needed at times.

Despite all the great things about style and production, I'm not too crazy about the story and execution. Cruella is as mediocre as any story can get. This is one revenge drama that doesn't excite me as much as I thought. While I may not be the biggest fan of 101 Dalmatians, it felt like it would fit into Cruella's arc quite a lot. The way I remember her from the animated movie or even 1996's feature film is quite different from the story here. I can see why some fans of the franchise might get upset by the changes. Also, despite it being a Disney movie, Cruella has some very dark stuff. There are some scenes that would bother children like death and a considerable amount of implied violence, so I think the movie might resonate more with adults and teenagers rather than children who are Disney's target audience. This is not a family movie and a lot of parents will probably not like a few scenes.

Cruella is long and I did feel the time. It's two hours and 14 minutes and although I would have preferred a more interesting story arc and a tighter narrative to trim down the runtime, I did enjoy the film overall and absolutely loved the characters, the soundtrack, the costume design, and that is enough to make it an entertaining watch and successful movie. There is also a sequel in the works now.