The sounds of Thainess

published : 23 Mar 2022 at 06:23
newspaper section: Life
writer: Yvonne Bohwongprasert
The Trivisvavet sisters Valika, left, on the khim, and Akira on the ranat ek.

International success on the classical music stage comes with devotion and a real passion to pursue what one embraces. In the case of teen sisters Valika and Akira Trivisvavet, it was Thai culture.

Playing Thai classical music instruments at such a globally recognised venue has been a huge honour for the girls, as the competition's purpose is to discover artists of outstanding personality and offer them awards that can help to launch their international career if they wish.

The competition, which is open to all nationalities and ages, invites a select group of winners to perform at the Weill Recital Hall in the Carnegie.

While both felt privileged to represent Thailand on the world stage, they are now hoping to help others to achieve their dream to compete internationally.

As they were offered support and opportunities by their parents and music instructor to compete at the highest level, the Trivisvavet sisters want to play a supporting role for others to reach their potential as well.

"There is so much young talent in our country, many of whom are born into families who have played classic Thai instruments for generations but lack the know-how and finances to compete at a global music event. We would like to step in and help them with their endeavours to do so to the best of our abilities," said Valika, 17.

"We consider ourselves privileged to have been given the opportunities to reach where we are today and feel it is time for us to help others to realise their dreams. We hope to start this by creating a website and involve people to support this aspiration of ours."

Akira, who is 15 years old, added that when they competed at Carnegie Hall, the violin, piano and French Horn was represented. Yet, the khim and ranat ek stood out because of their uniqueness.

"It was nice to see the positive reactions of people towards our musical instruments which for many were different from what they are used to. This made me realise just how nice it would be to see more of our classical music instruments represented on the world stage."

Both sisters are currently completing high school in the US. They began their training in khim and ranat ek while studying at Shrewsbury International School Bangkok.

Despite the fact that both their parents instilled in them a love for Thai culture and traditions through classical music and textiles, they have allowed their children to find their own musical path by guiding them in every step of the process.

A khim enthusiast, Valika was awarded first prize for her piece Khaek Buchayan by the master of Thai classical music Montri Tramote. 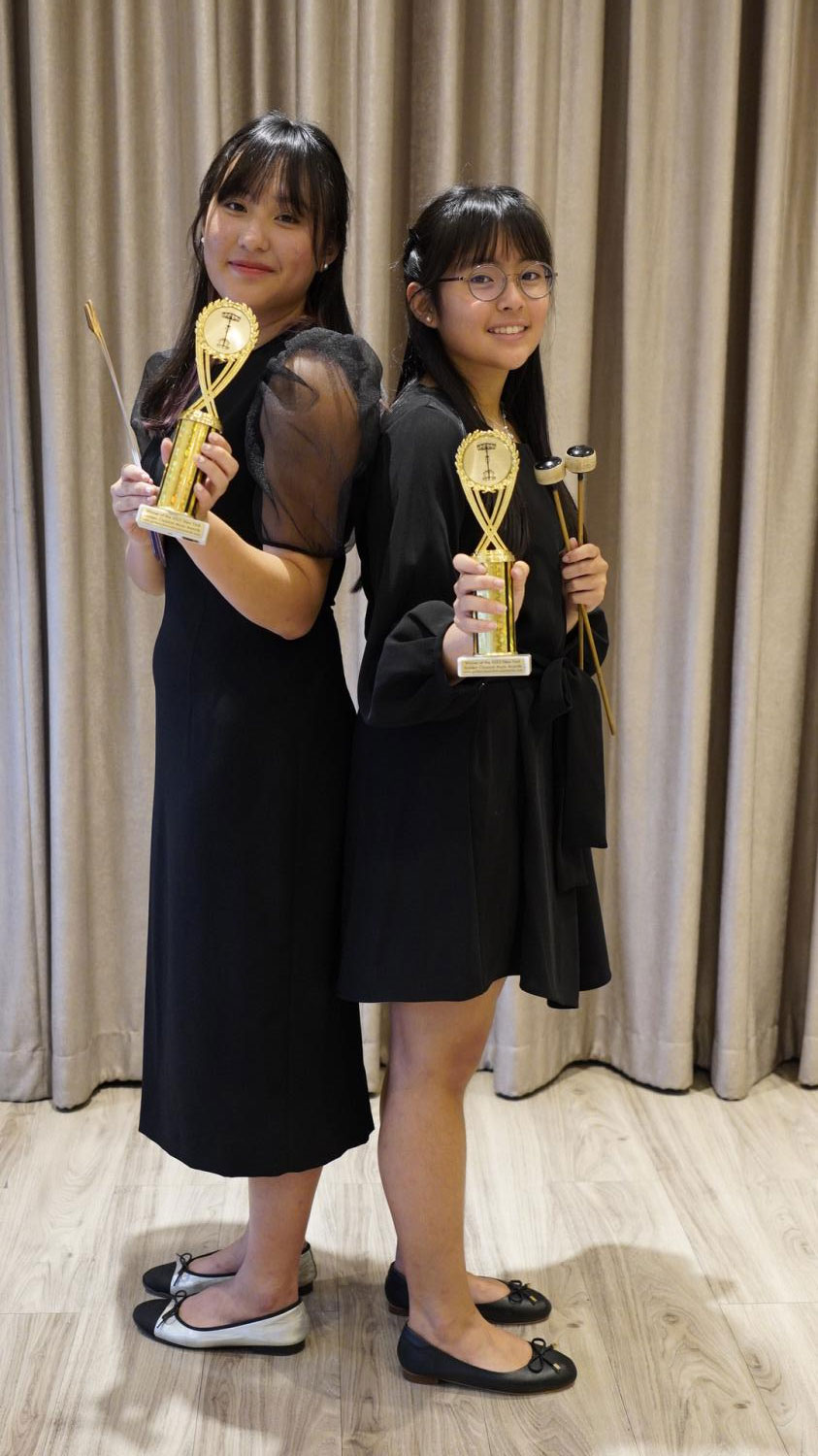 Valika and Akira with their Golden Classical Music Awards. (Photos courtsy of the Trivisvavet family)

She said that over the past centuries, the khim has been adapted, improved and developed several times by Thai musicians. It has developed a uniquely Thai character and expresses a strong sense of being Thai in its sound.

The 10th grader said that musicians and composers have created a uniquely Thai style of khim music that has become popular in Thailand and surrounding countries as well. It has become so popular that it has become an expression of Thai culture wherever Thai shows and performances are conducted.

For Valika, the khim brings out her feminine side. It was in the fourth grade that she asked her mother's permission to take lessons and she hasn't looked back since.

"Khim is often described as soft and beautifully melodious, however, the more that musicians build a technique, you will find that it can create music that is rather hardcore. I have played it for around seven years now and it has been a fascinating experience," she said.

As for the aforementioned competition, she continued: "I am really glad that I competed at the Golden Classical Music Awards, even though at first I wasn't sure if I could do so as it was held during the week of my final examinations and I was not sure if I was ready. After a pep talk from my mom, I felt encouraged and gave it a go and winning at the end felt really good and built character in me.''

The younger of the two, Akira shared how a chance opportunity to attend a Thai classical instrument concert birthed in her the interest to pursue learning a Thai instrument.

"I was studying in the sixth grade at Shrewsbury when I was invited to attend a concert that inspired me to seriously take up lessons. I was rather in awe of the fact that each Thai musical instrument had its own uniqueness. Back then, I was already playing the clarinet and piano, however, I was adamant to learn a Thai classical instrument. I asked my mother if I could enrol and she was more than happy to oblige.

"During this phase, I was exploring which instrument to pick, I tried the khim, but while it is also a wonderful sounding instrument, it was the ranat ek that captured my heart.

"The ranat ek is used as a leading instrument in Thai classical music ensembles that feature wind and percussion instruments, which is another interesting aspect of it. It is a majestic sounding instrument and it stands apart from the rest. No two people can produce the same sound, so its uniqueness really captivated me. Moreover, when I play ranat ek, I feel I can always express my emotions. I find the charm is that it touches one's soul in a manner that is personal."

Articulate and witty, she was just 12 when she began her pursuit, and three years later the fire in her to play is as strong.

"My siblings and I grew up listening to Thai classical music, thus making the experience all the more memorable when we were able to win top spots at a globally recognised competition. The ranat ek is not only used to play Thai traditional music but it can also be incorporated into modern-day music, thus making it suitable for youngsters to learn."

A couple of challenges both sisters faced in their pursuit for success was time management and logistics involved in carrying the musical instruments to practice while keeping up with their studies in the US.

"Here in the US, we have to make a much bigger effort to train. Keeping our musical instruments safe when not in use has become an added responsibility," said Akira. "Also, the time difference between Thailand and the US contributed to our Thai music instructor having to work late into the night for our online lessons.

"Just prior to the performance, he flew from Thailand for the final practice sessions, which played a huge part in helping us tighten any loose ends."

The teen musicians said they felt a great sense of pride to introduce the Thai instruments to their foreign and American friends and teachers. They said many of them were seeing it for the first time and felt rather in awe of what they saw and heard.

While playing the khim and ranat ek is still a hobby for both sisters, it has helped them gain confidence and build character. Although it has made Valika more competitive, Akira finds that it helps her de-stress.