The healing power of art

Seated at an easel, a boy put his heart and soul onto blank paper. With bold brush strokes, he painted a red house with six yellow fish. As Tommy put it in Kazuo Ishiguro's Never Let Me Go, art says what is inside of you. Little does anybody know this is part of art therapy for patients with rare diseases.

"Art provides a window on their mental state. It is reflection of their internal world," said art therapist Chanisara Wachasit. "They don't choose to be born this way, but they can take control of their life via art. It can empower them to explore other possibilities in life. Children can take it up from an early age. Parents should observe and nourish their natural inclination."

Recently, patients and caregivers joined a creative workshop at Soul Salt River City, a gallery, painting bar and restaurant by the Chao Phraya River. Held by Takeda Thailand, the event provided a platform for community members to share stories and support, and raise awareness of rare diseases.

Over 400 million people around the world suffer from rare diseases, 80% of which are hereditary. Around 3.5 million of them are Thai, but only 20,000 receive treatment. There are between 5,000 and 8,000 rare diseases globally. More widely known examples include cystic fibrosis, Huntington's disease and muscular dystrophy. 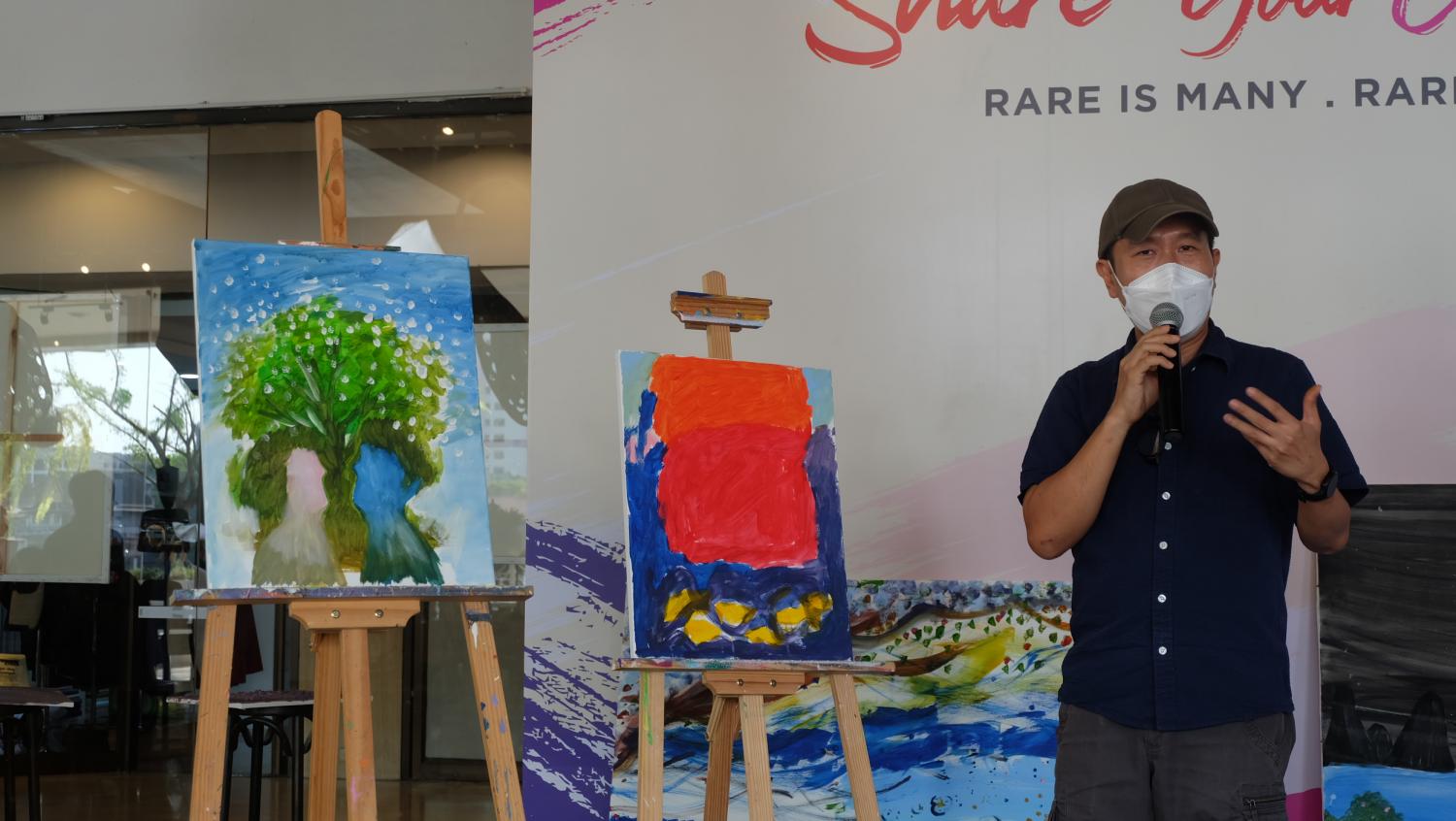 Above Ekawat Suwantaroj, a haemophilia patient, paints a green tree surrounded by his parents to show his gratitude. (Photo: Thana Boonlert)

Art therapy does not require any skill, making participants comfortable to jump in and try. Sunisa Artonsri, a teacher, painted a rare tree whose body grows in the sunlight, but the roots are spoiled. It turns dark blue, crimson, purple and then something in between. Despite being only a painting, it shows what is inside of her.

"It is titled My Hope. It looks like an ordinary green tree, but its roots are gloomy because it is how I feel when my disease flares up. It isn't brown as usual because I know, deep down, that I am different. I have been sick with a rare disease," she said.

In 2013, Sunisa's eyes swelled up badly. At first, she thought she had an allergy, but the weekly flare-up forced her to go to the hospital. It was not until she saw a third doctor that she was diagnosed with hereditary angioedema (HAE).

"It took me half-a-year to find out what was wrong with me. I felt relieved when my illness was given a name but then worried because it is a rare disease. There is no cure, but there is palliative care," she said. "There are only 20 patients in my support group."

Her condition is thought to affect one in 50,000 people worldwide. Due to the abnormal function of a blood protein called C1 inhibitor, it causes swelling in any part of the body. It can occur at any time from childhood to later in life, vary in frequency, and last from three to five days.

When stricken, Sunisa's eyes cannot function normally, forcing her to take time off to recover. However, her symptom is milder than those who have airway or bowel swellings. HAE is not included in the 24 rare diseases under the universal health coverage scheme.

"The National Health Security Office [NHSO] hasn't covered it because the cost of treatment and the number of patients remain unknown," she said. "As a civil servant, I am still entitled to free drugs. For example, I get two injections, costing 34,000 baht each, to relieve swelling." 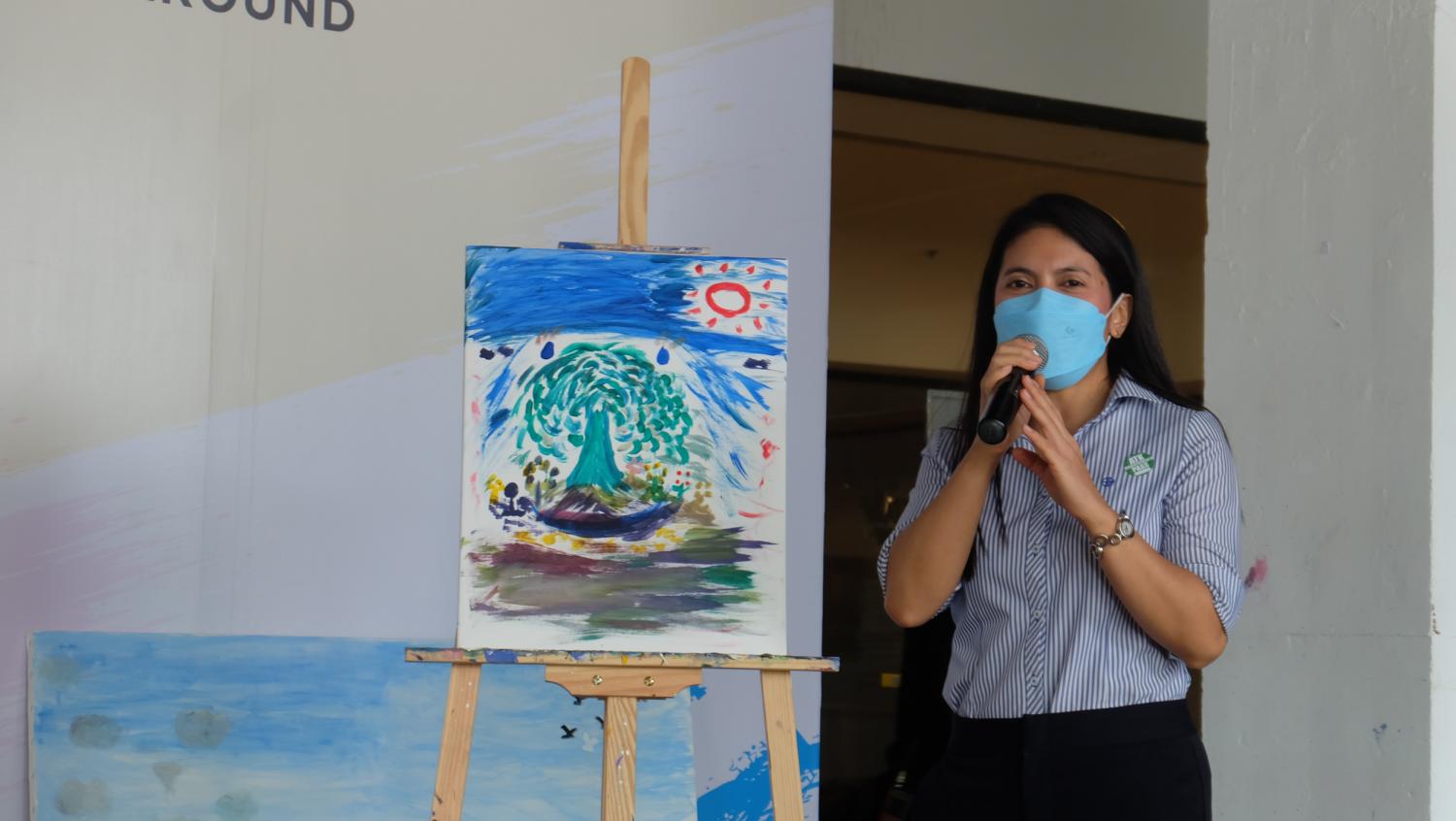 Another participant, Ekawat Suwantaroj, a graphic designer, painted a green tree under a clear sky sprinkled with white dots. It is surrounded by two figures in pink and blue. His vivid painting shows gratitude to his parents. Because of his illness, he receives special care.

"It is titled Haemo Tree because I am vulnerable to haemophilia. However, I was well cared for. If I had been born normal, my parents would have given me freedom," said Ekawat, vice-president of the Thai Haemophilia Patient Club. "I just stayed at home, painting, because there weren't many activities and art didn't cost much."

Haemophilia is a rare disease that prevents blood from clotting properly. Hemophilia A is thought to affect one in 5,000 to 10,000 males. Hemophilia B is less common, affecting one in 25,000 to 30,000 males. Patients bleed easily or have muscle pain because their bodies do not produce enough blood-clotting agents.

When Ekawat was little, he was unaware of his condition, but remembered having frequent bruises. His parents didn't allow him to play with friends of his age because in case of an accident, he would bleed easily. It was not until he was taken to hospital that he began to know he is different.

"In those days, there were no injections at home. My parents would take serious precautions. Nowadays, the quality of life is much better," he said. "Still, haemophilia is incurable. There is gene therapy abroad, but it is very expensive."

Patients receive home treatment, but also have to go to the hospital for regular check-ups. Since 2006, the NHSO has given them an opportunity for treatment assistance. There are almost 6,000 cases, but only 2,000 have registered because many patients have mild symptoms or go undiagnosed.

Parenting children with rare diseases can be difficult. Paweerisa Assawasoontornnate resigned from her job to look after her son born with Prader-Willi syndrome, a rare genetic disorder that causes constant food cravings and overeating, which can lead to other non-communicable diseases. Her 13-year-old son is in good shape because she monitors his diet closely.

"When children with this rare disease enter adolescence, they often experience emotional problems. Improving their mood is beneficial to treatment. On the other hand, stress can cause overeating. Art can come in handy. At my son's school, there is an art class where students are given freedom and encouraged to present their artworks," she said.

Prader-Willi syndrome is not included in 24 rare diseases under the universal health coverage scheme. Paweerisa takes her son to at least four specialist doctors: child development, genetics, psychology and endocrine system. He is on growth hormones to promote his metabolism and aid muscle and bone mass. As far as she knows, there are around 130 patients in the support group.

Paweerisa, secretary for the Thai Rare Disease Foundation, said some patients have limited access to drugs because they are not covered in the gold card scheme (30 baht universal health plan). She does not want to infringe on the civil servant medical benefit package, but gold card subscribers are in the majority.

"Are there any supportive measures? I pay almost 50,000 baht per month for my son's drugs. However, some parents can't afford full costs. Drugs for rare diseases have a golden period. If they aren't used at a specific moment, the chance to treat symptoms will be lost," she said. "Thais should have equal access to treatment."