Campaigning for a good cause through his riveting photography has made photojournalist Ed Kashi a household name in the US. 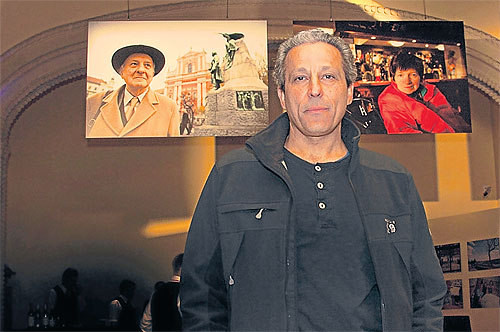 With 35 years experience under his belt, the veteran journo has worked extensively with renowned publications such as National Geographic, netting a string of accolades for getting to the heart of his human subjects. His editorial assignments and personal projects have generated four books so far. Kashi was recently recognised for his eight-year personal project on "Aging in America".

Kashi's deep-set eyes, lanky frame and deadpan stare make him an enigmatic personality to decipher at first glance. Engross him in a conversation about his passion for social and political issues and his outgoing and bubbly nature surfaces with little provocation.

Life spoke with Kashi, an Iraqi-American, at his recent exhibition titled "Facing MDS: When Every Moment Counts" in San Diego. He received rave reviews for his photographs capturing the active lives and enduring spirit of elderly people living across the globe with myelodysplastic syndromes (MDS) _ a group of closely related but diverse blood cancers.

By agreeing to be documented, he said the subjects, who come from Denmark, the UK, the US, Canada and Slovenia, helped redefine what it meant for the aged to live with MDS.

"I had a wonderful time working on this project because of all the great people," Kashi said emphatically. "For me, they are the real heroes for opening their lives to be documented. Through direct experience, I have found that despite people's reservations about opening their lives to me, they eventually do so if they decide to tell intimate stories about themselves. Not only are they willing to open their lives but also expose themselves to a vulnerable and compromised situation.

"I call them the heroes because their stories convey a global message of hope for patients with MDS. By telling their side of the story, people facing the same fate can find support and solace. The still photos are of their daily activities with families and friends. The goal of this project was to raise awareness about myeloma and inspire others going through their cancer journey to become strong self-advocates for their health."

While each family had a unique story to share, it was Evald K. from Slovenia who captured this photography maestro's heart. Standing at an imposing two metres, the 81-year-old former comparative literature professor carried himself with dignity and pose, often indulging the photojournalist with his intellect and wit.

Evald, who keeps fit by Nordic walking, was only happy to oblige when asked to demonstrate how it was done. He came across as a really amiable kind of guy, mused Kashi with a grin, because he also seemed to be well liked by everyone in town and the university.

The American's thoroughly thought-through imagery here has received the thumbs-up for capturing the human condition at its most poignant stage. Each photo exhibit inspires and coaxes patients with MDS to take a proactive stand in their health-care decisions and to tell others what it means to be an older person living with an uncommon, difficult-to-treat blood disorder. The blood cancer imposes a tremendous burden on patients, with chronic anaemia sufferers requiring frequent blood transfusions.The whole idea behind this project, says Kashi, was to stimulate and empower patients going through their cancer journey to become self advocates for their health and to promote the improvement of the standards of treatment of elderly cancer patients.

Getting picked for the job didn't come as a surprise to him. "I was asked to be a part of this campaign based on the work I had done on ageing. I took eight years looking at the issue of ageing in America. We published a book in 2002 and made an hour-long documentary.

"The work I did earlier on ageing in fact prepared me to deal with having to care for an elderly family member. Two years after my book was published, my family moved from San Francisco to New Jersey to take care of my sick 82- year-old father-in-law. He spent the last two years of his life living with us and died in our home. And I like to say that this work on ageing has made me a better human being. I learned so much about myself from caring for an elderly relative. This exposure made my work even easier when I had to capture the daily activities of MDS patients."

On a related issue, Kashi said that his years of experience working with America's ageing population has made him deeply concerned about the way they are marginalised in society. Nowadays, the entire focus is on the age group between 18-35, while the rest seem to be an insignificant part of the community. It is a phenomenon that he believes has probably been around for only two to three generations, offset largely by capitalism.

The level of narcissism has also been on the rise. Whenever Kashi goes and photographs the elderly, he makes it a point to pull them back into mainstream society.

Meanwhile, Kashi is a great believer of advocacy journalism. He tackles social issues with passion. In his capacity as photojournalist, film-maker and teacher, he gets to make a lasting impact on the world. His most grave concern at the moment is how humanity can sustain itself on Earth.

Humanity, he said, has become a cancer on Mother Earth, misusing and polluting her, particularly in developed countries such as America. Searching for sustainable methods to survive as a human race motivates him to continue his search for answers which he says would be easier to find if it wasn't for politics and economics that often get in the way.

Having travelled extensively to countries with conflict has, however, made Kashi appreciate living in America: "I am happy to see that with all of America's imperfections, we can still put all our differences aside and respect each other's opinions.

"However, what is most worrisome at the moment is that the concept of the common good has been lost in our American society. Basically people in power are all out to enrich themselves, knowing very well that such a practice is not sustainable, that it will eventually collapse due to a revolution or due to politics!"