E-books have become more than a fashion statement for lovers of new gadgets on the market. For people in the publishing industry everywhere, including Thailand, it's seen as a medium imperative to their survival, the way they conduct business and tap the opportunities it will spawn. But there are always exceptions. Makut Onrudee, managing editor of Butterfly Book, a publishing house, has publicly said he has no plans to jump on the e-book bandwagon.

"Many people have asked me whether Butterfly Book will move into e-books. It is time for me to make it public. First and foremost, I still have a lot to do in order to produce better quality books and deliver them in their current [physical] form. It is not that I want to swim against the tide. I am simply not ready for it," said Makut, now 62. 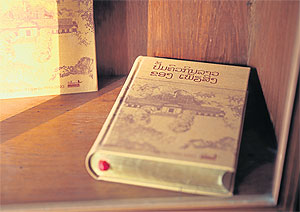 It took the Butterfly Book 25 years to publish the Thai version of the Traditional Recipes of Laos by Phia Sing Chaloensilp.

Butterfly Book is an established name known for producing beautiful books, the type buyers like to collect. It spends considerable time editing manuscripts, designing charming covers and illustrations, not to mention printing books that are durable and of good quality.

In an age when a publisher can publish a book in two months, Makut still takes pride in spending years doing the same, to make sure manuscripts are precisely edited, book covers are gorgeous and sewing and binding compliant with excellent craftsmanship.

"We need at least two years to produce a book and that is our most hectic schedule," he told Life in recent interview in his office, surrounded by books well kept and arranged on vintage shelves.

"Indeed, we have a book where the writer died before seeing its Thai version," Makut said, referring to the translation of Traditional Recipes of Laos by Phia Sing Chaloensilp, which took 25 years to translate, and another in production for 24 years, Arthit Uthai Dang Sai Fah (The Dawn Came Up Like Thunder) _ a Thai translated version of a memoir of British soldier and artist Leo Rawlings, who was captured by the Japanese and forced to work on the Death Railway in Kanchanaburi province during World War II.

Butterfly Book has set the benchmark in book production. It uses imported eye-friendly paper and non toxic ink so as to minimise potential health risks to the workers employed in the printing press, readers and to preserve the environment.

Butterfly Book still prefers sewn binding as this method makes books more durable; glue binding is cheap and faster but is harmful to the respiratory system of binding workers. Buyers can return books with defects and get 10 books for free if the copies they bought have disintegrated binding.

Makut reiterated his policy of not running a booth at book fairs because Butterfly Book does not want to hasten the deadline of production. Furthermore, he believes book fairs are the cause of price dumping, and the big discounts offered at such events do more harm than good to the local book industry.

"Price dumping and big discounts at book fairs will eventually drive a nail into the coffin of bookshops, especially small ones. Who needs to visit bookshops when they can wait until book fairs to buy books at 30% discount?"

For Makut, the extinction of small bookshops is more than a business issue. ''Bookshops are indeed semi public libraries where children and people can go and read books. Children can visit bookshops 10 days to complete reading a book they cannot afford to buy. But you can trust that these kids will become bookworms and go back to buy books when they have money.''

The local book industry is now a place for big corporates, big publishers. He predicted increasing monopoly in the business.

More monopoly means less diversity. ''Small publishers will disappear or they have to change to make books that only sell. So we will have more romantic books, book on superstitious and gossips. 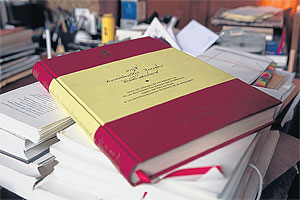 Another project Butterfly Book has embarked on is a book of inventory, the Tri Pitaka (Lord Buddha’s Scriptures), royal gifts King Chulalongkorn sent to Spain and other colonial powers of the time.

''The book industry is different than other products as it is about knowledge. Monopolised knowledge is not good for a democratic society.''

Apart of book fairs, Makut, author of the famous youth title Pee Sua Lae Dok Mai (Flowers and Butterflies), admitted that he disagrees with many happenings in the book industry in Thailand.

On his Facebook page _ which has more than 3,200 fans _ Makut has been posting comments, criticising many state campaigns to promote reading among Thais _ for example the establishment of TK Park _ a modern public library initiated by former prime minister Thaksin Shinawatra, and the deductible tax for book donations initiated by former prime minister Abhisit Vejjajiva for the Bangkok Metropolitan Administration's Book Capital campaign slated for launch next year.

Makut, who has been a recluse of sort for most of his literary career, broke his silence about a decade ago when he was invited by the Thaksin government to develop the book industry and reading culture in Thailand.

At the time he proposed a National Book Institute, an independent body to regulate every aspect of the book industry and to encourage reading. He came up with many innovative ideas ranging from anti price-dumping laws, measures to protect copyrights, assistance to small publishers and writers, better and more libraries, a state-owned printing house to publish good books at prices that were affordable, and so forth.

''From many overseas trips visiting libraries in Singapore and Hong Kong, the government came up with the concept of TK Park, a library in a department store,'' Makut said, laughing, while his proposal for a National Book Institute was shelved.

''With such huge investment all they managed to get was a library in a shopping complex with around ten thousand members. It's not a sound investment as the money spent on rental fee could be used to construct a better public library,''said Makut, adding the state could have done better; it should have passed a law requiring public buildings and shopping complexes to allocate space for public libraries. 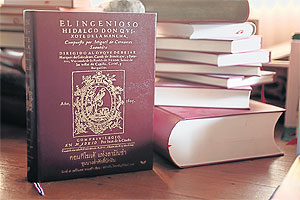 Butterfly Book was entrusted by the Spanish government to carry on King Juan Carlos’ project to publish the Thai version of El ingenioso hidalgo don Quijote de la Mancha (The Ingenious Gentleman Don Quixote of La Mancha in English version) as a gift to commemorate the 60th anniversary of His Majesty the King’s accession to the throne. The book has a splendid leather cover.

And he viewed Abhisit's initiative _ book donation for tax deduction _ as an opportunity for cultural brainwashing. ''Books need to be screened simply because they involve knowledge. If we let anyone donate any book for tax deduction, we will see local libraries filled with karma books, gossip books or romantic books. The political camps will use the book donation as a means to instill their own beliefs,'' he cautioned.

It is easy to pass Makut for a whinger. Yet, the man who described himself as ''old fashioned person who prefers to walk slowly'' was surprisingly quick to respond when asked how he planned to develop the editorial profession and the book industry as a whole.

Makut has conducted many research projects on improving the book industry and promoting reading. To help small businesses compete with big ones, he recommend a model in which small publishing houses were urged to form a pool to enhance their bargaining power, for example.

Almost a decade ago, he launched courses dealing with the editorial profession such as manuscript editing. Now, they are part of bachelor's and master's degree courses at Chulalongkorn and Burapha universities.

At the offices of Butterfly Book in Soi Sukhumvit 24, he has opened what is called ''Roeng Rien Vicha Nang Sue'', or a school of on the subject of books, where the curriculum includes, among others, editorial profession and publication of books.

Two years ago, he launched a community library project in southern Krabi province where he shipped 7,000 books that were distributed to eight mosques. The libraries don't have a librarian _ people just sign their names in the registration book if they want to borrow books home.

As it's turned out, books are a glue that bind distant communities together.

''People read more and they return books to the library. It counters an old belief that people do not return borrowed books. I believe that if you treat people with trust and respect, they will return you the same thing.''

Makut, a native of Songkhla province, is planning to launch a similar project to the three restive provinces further south, to strengthen peace and community ties.

Better and more libraries and books are the essence of equal access to knowledge.

''If people get equal access to knowledge, people will be able to comprehend all matters clearly. Society will make judgement on information and knowledge, not by favouritism, ignorance or misinformation.''

''The bottom line is politics divide people; they quarrel and kill because they do not know enough.''