It's not an usual feat but Tae Piang Pu Diew (P-047), a small Thai independent film released over the weekend at Lido Theatre and the Esplanade Ratchadaphisek, has become an instant sensation. 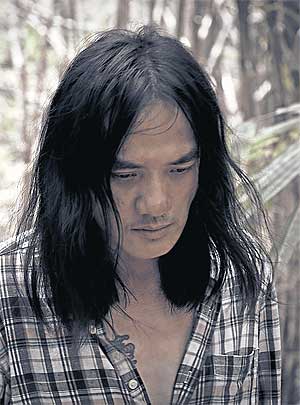 The film starring indie rocker Apichai Tragoolpadetgrai was originally scheduled to have two screenings a day at both cinemas, starting last Friday. But after a large number of fans _ some travelling from upcountry _ flocked to the ticket booths and forced the staff at Lido to put extra chairs in auditoriums, both cinemas had to add more screenings of the film.

Lido seats around 230 people. On Saturday, it had to add 30-40 chairs on the aisles at the afternoon screening. Meanwhile at the Esplanade, not a cinema known for indie movies, two more screenings were added on Saturday and Sunday. Don't forget last weekend the film that monopolised cinemas around the world was Christopher Nolan's The Dark Knight Rises.

A producer of P-047 reported that one fan who failed to obtain a ticket was seen crying near the cinema entrance.

The reason the film drew such surprisingly large crowds is believed to be its leading actor: Apichai is a brooding rocker with a cult-like following. His first film had been much anticipated by fans, and it helped that his performance was a revelation. Playing a locksmith who breaks into people's houses and imitates their lives, he brings sadness and gravity to the arthouse film.

P-047 premiered last year at the Venice International Film Festival. Initially, it was supposed to remain on show at Lido and the Esplanade untiltomorrow, but signs now point to an extended run.