Workers at a state art museum in ex-Soviet Uzbekistan have discovered a long-forgotten collection of Picasso ceramics in the archives and put them on display, more than four decades after the pieces were donated. 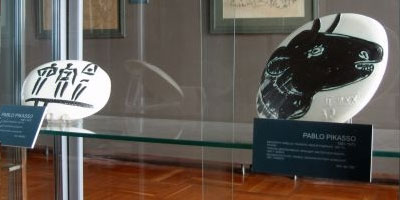 The collection includes decorative and dessert plates and several jugs featuring favourite Picasso motifs including a dove, a woman's face and a bull's head.

"We were looking for Russian porcelain items in the archives to fill up the museum's Russian avant-garde department last year. Then suddenly we came across the ceramic works by Picasso," she told AFP.

Pablo Picasso branched out into ceramics in the 1940s and went on to create hundreds of works at a French pottery called Madoura. In June, Christie's auction house sold a collection of his ceramics and other items from the workshop for $12.6 million (9.8 million euros).

His ceramics ended up in Uzbekistan after being donated to the Soviet Union by the widow of a friend of Picasso's, who sympathised with socialist causes.

The 12 ceramic works were sent to the Tashkent museum after being donated on behalf of the French Communist party around four decades ago, the museum's chief curator, Mirfayz Usmonov, told AFP.

Museum documents name the ceramics as "a donation from Nadia Leger of France, on behalf of the Institut Maurice Thorez of the French Communist Party."

"The first seven items were received in 1968, then in 1971 the museum received four more ceramic dessert plates from the Pushkin Museum of Fine Arts in Moscow," Usmonov said.

The museum has not yet accounted for how the final item in the collection arrived in Uzbekistan, he added.

"We have to dig out archive documents to find out the origin of the one other Picasso masterpiece we have got here."

Nadia Leger was the Russian-born widow of the French painter Fernand Leger, a close friend of Picasso.

Both Picasso and Leger had felt sympathy towards Soviet socialism and were friends of the longtime French Communist party leader Thorez, who spent many of his years in the Soviet Union.

All items were made in the Madoura pottery workshop in southeastern France, according to their documents.

The museum staff and experts said the Picasso collection had been put on display at some point before falling into obscurity in the archives.

"While preparing the exhibition, I found archive documents that said the Picasso collection was displayed alongside other ceramic and porcelain works in the past. But I don't remember the exact years," art expert Akhunova said.

Picasso's works remained on the museum's records but were neglected because they came from the West, said Dinara Turaeva, a young art expert at the museum.

"I heard that there just was not much interest in Western art when Picasso works were first displayed many years ago," she said.

State-owned museums throughout the ex-Soviet Union went through a period of turmoil after the end of the Soviet era, when many struggled to survive, let alone properly catalogue their archives.