Ballroom dancing is poised to make a comeback thanks to Thailand's latest reality show, Dancing with the Stars

In olden days it was an activity of Bangkok socialites who dug the imported Western glamour. Then it spread to the middle-class, and young people grew up hearing stories about their parents going out for a session of the foxtrot and cha-cha-cha at the legendary Lumphini Park dance auditorium. Lee lat _ as we call it _ ballroom dancing, quaint and somewhat theatrical, went out of fashion, but now it's poised to make an unlikely comeback. Like so many skills and talents, this one needs an addition of drama and televised voting to shore up new enthusiasm. An ex-supermodel aims to bring it back. During her pregnancy, Metinee "Lukkade" Kingpayome became an ardent fan of Dancing with the Stars (DWTS) after watching the US version on YouTube. Enjoying it so much, she kept telling her husband, Edward Sharples, to find a way to bring the TV show to Thailand.

They have made it happen and a dazzling dance floor will open for the waltz, foxtrot and tango, every Tuesday night, from Jan 8, on Channel 7. The global hit ballroom and Latin dancing competition has drawn high ratings in 42 countries and the Thai version is expected to revive the craze for lee lat _ or at least to watch it on the tube."After singing contests, dance competitions came along and took over from them in many countries. There are a lot of dance TV shows, and DWTS is the first for Thailand, as an international format that has worked everywhere," said Sharples, who did Big Brother Thailand when he was Southeast Asia managing director of Endemol, a television production and distribution giant.

Sharples and his wife now run the Bangkok-based Metine Company, the licensee of DWTS, originally conceived by BBC Worldwide under the title Strictly Come Dancing.

Launched in 2004, the British TV show features celebrities, who are beginners in ballroom and Latin dancing. They partner with professional dancers, who each week teach them a dance routine for a performance to win over a panel of judges in order to stay in the competition, and ultimately win the Mirror Ball Trophy.

The show's record-breaking rating put DWTS in the 2010 Guinness Book of Records as the world's most successful reality TV format.

With more foreign formats screened on Thai television, Sharples said that they won't take over from local lakorn (soap operas) and game shows as they still take up a small part of total broadcasting time.

''What they can do is give Thai viewers some international quality productions,'' he said. ''DWTS, for example, is a huge production involving investment such as in cameras, sets, lighting and wardrobe for a show that's full of style and glamour.'' 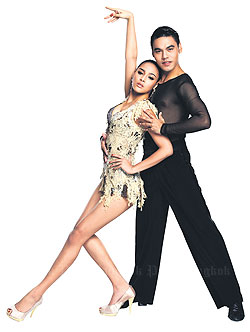 With her background in the fashion business, Metinee promises a dancing extravaganza as her makeup artist, hair and fashion stylist friends will be helping her glam up the contestants.

''It's really an amazing show because you get to see celebrities _ actors, musicians, athletes _ step out of their comfort zone and do something completely different from their realm,'' Metinee said. ''You watch them sweat, you watch them cry and hurt their legs as they try to do ballroom and Latin dancing, which is really difficult and a lot harder than people think.''

Selecting seven celebs for the first season was very difficult, she added, and they needed to have a certain ''wow factor'' to get on the show.

From 17-year-old Timethai to sexagenarian Malinee, the stars are likely to bring their different personalities to spice up the show. The most surprising contestant is Isul, who is making a comeback after disappearing from showbiz for over a decade.

''Ballroom and Latin dancing is something completely new to me, and I want to learn some sexy moves,'' said the 51-year-old actor, who spends 10 hours a day practising steps with Poonyapa Dhanwilal, a Latin-American dance champion.

The other six professional dancers also have local and international titles under their belts, but the challenge now is to train the celebs for superb performances to wow the three judges _ Tinakorn Asvarak, Manaswee Krittanukul and Amon Chatphaisal.

''I will be a very kind but vicious judge,'' said Tinakorn, a leading choreographer. ''I will be looking at the whole presentation and details of the mood and tone of the performance as well as the interaction and chemistry between the two dancers.''

He deems that the professional dancers and their partners will show the world how Thais can be fantastic on the dance floor.

''As Thais have won many competitions, I don't think that we are handicapped in dancing. Moreover we can add our own style to strict routine beats like the cha-cha-cha for a sizzling Thai-flavoured performance,'' he said.

Ballroom dancing veteran Amon Chatphaisal believes that the show will stimulate the country's dance scene and inspire a new generation of dancers.

''As Thai viewers watch the stars trying out the steps, they may want to take up ballroom and Latin dancing too,'' said Amon, who's been in the dance business for some 40 years. ''DWTS shows them that anyone can learn to dance within a short period of time if they really want to. Simply put, if you can walk, you can dance.''