Dropping in on Venice

The most common sound that dominates Venice is not the crooning of gondola rowers or passionate Italian proclamations of love. In Venice, as strange as it may sound, one hardly hears any Italian spoken as the winding streets, ancient bridges and water buses are flooded with tourists from around the world. 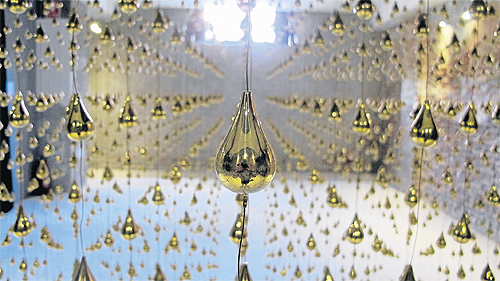 Instead, the governing, all-consuming sound is that of rolling suitcases on cobbled streets and audible panting when heavy luggage is dragged over bridges. Click-clack, click-clack through night and day.

But for the past month, pedestrians, tourists, restaurateurs and flower sellers around Santa Croce have become more familiar with Thai being spoken and Carabao music blasting over the cacophony of construction inside an abandoned building, sandwiched between a souvenir shop and a run-of-the-mill Italian restaurant.

For that month, artists Arin Rungjang and Wasinburee Supanichvoraparch and their hardworking crews, with the support of the Ministry of Culture's Office of Contemporary Art and Culture (OCAC), have poured sweat and tears into the creation of the Thai Pavilion at the 55th International Art Exhibition _ la Biennale di Venezia. Known as the Venice Biennale, it is the world's highest-profile art event.

The Thai team has turned a dilapidated space into a structured art venue that can house two exhibitions separately. 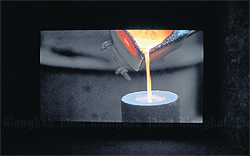 The opening reception last Thursday was presided over by Thailand's Ambassador to Italy Surapit Kirtiputra along with OCAC's top management, members of Thailand's art elite, with a few hangers on, expats living in Venice, international art lovers and passersby who popped in to enjoy free Thai food and drinks.

Since it forms a main theme of Arin's work, the dessert thong yod was served, but, luckily, the limited space didn't allow the organisers to set up a cooking session to unnecessarily display "Thainess". There was, however, a Muay Thai demonstration outside the pavilion, blocking the walkway for a few short minutes _ a customary practice to impose our traditions on an international arena.

Arin and Wasinburee were selected to represent Thailand at this prominent art gathering with OCAC support, and the renowned artists branched out from the initial "suggestion" that they create something related to Thai cuisine. Never ones to take meanings too literally, Arin and Wasinburee operated in the same vein of Venice Biennale's main theme, "The Encyclopedic Palace" (see page 4 for more on that). Both artists question the fragmented origins of Thai cultural streams, documented history, oral presentations and parallel flows of connectivity.

Curated by Worathep Akkabootara, Arin's Golden Teardrop is a multi-platform work that traces the stories of Constantine Phaulkon and his consort Maria Guyomar de Pinha. Phaulkon was a Greek traveller who rose to power in the 16th century Ayutthaya court, and Maria Guyomar is said to have introduced thong yod, or ovos moles as the Portuguese nuns who invented the super-sweet dessert called it. The artist gently retells the journey of sugar from supposedly unconnected angles, challenging perceptions and history as it's usually taught through political struggle, cultural mobility and geographical facets. Arin's Golden Teardrop sphere is made of thousands of bronze teardrops in the shape of thong yod, while his accompanying 27-minute video pulls his trajectories together for the audience to recount, question and defy repeated accounts based on memory and written documentation.

As a Silapathorn Award winner, Wasinburee is no stranger to the contemporary art scene. Also known for single-handedly turning Ratchaburi into an art city through numerous community projects and platforms, Wasinburee is credited with modernising traditional water jars from the central province. With his work Poperomia, the artist explores the overpowering power of popular culture and its effect on Thailand's age-old agriculture. Recalling his childhood excitement when the nation announced its intention to move forward with technology and industry, Wasinburee uses Poperomia , curated by Penwadee Nophaket Manont, to pause and examine two aspects of agriculture.

Poperomia features a fibreglass water buffalo, yarn wrapped bricks (one of the components of which is rice) laid throughout the exhibition space, partially wrapped Buddha statues and pottery. Through colourful yarn, bricks and objects typical of Thai rural society, Wasinburee asks who we are, who we were, who we are being told to become and who we should be. The Thai Pavilion certainly paves the way for Thai artists to receive international recognition as well as showcase the country's talent to the world's contemporary art scene.

The chosen artists are deserving, but a more rounded execution in terms of organisation and promotion would have pushed the envelope a little further. It is unfortunate that the location of the Thai Pavilion is rather off the mark.

Situated across from Santa Lucia railway station, the pavilion is far from the main venue in Arsenale and Giardini, which might prevent many art lovers from seeing the works.

If the building were remarkable in any way, the distance would have been excusable.

For one week before the public opening of Venice Biennale, Rirkrit served lunch at the majestic Bauer Hotel and dinner at Palazzo Flangini.

Besides the Thai offerings, the main Biennale exhibition is of a humongous proportion, and it will take days to inspect each artwork closely. A few more days are needed to browse through national pavilions inside the main areas of Arsenale and Giardini, featuring stars of the art world like Cindy Sherman, Anri Sala, Steve McQueen, Bruce Newman, Ai Weiwei, and plenty more. If you want to be immersed in art, Venice is the place to be right now. Drag your suitcase out, and make sure the wheels are strong enough to click-clack their way along the Grand Canal.

The 55th International Art Exhibition _ la Biennale di Venezia will be on until Nov 24. 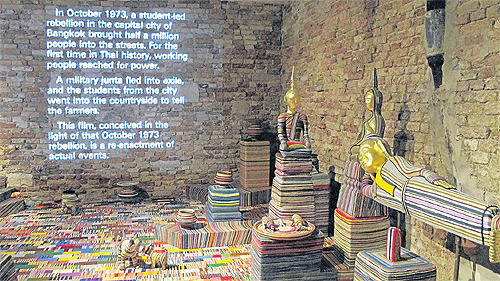