As Only God Forgives opens in Bangkok, director Nicolas Winding Refn discusses what happens when the logic of the West meets the mysticism of the East

With serene conviction, Nicolas Winding Refn baptises Bangkok as the new capital of Hell. In the blood-lusting new movie Only God Forgives, which opens tomorrow, the Danish director transforms our city of lost angels into a delirious nightmare _ even a torture chamber _ as his American characters face the nihilistic retribution of their own making, with a lot of help from Oriental mysticism.

Only God Forgives premiered at Cannes Film Festival in May, and it instantly drew bricks, boos and flowers. The film tells the story of Julian, played by Ryan Gosling, an American man who runs a muay Thai camp in Bangkok with his brother. When this brother is brutally killed in a whorehouse (there's always a whorehouse), Julian's mother, played with relish by Kristin Scott Thomas, arrives in the city, and together with her remaining son sets out to take revenge.

That leads them to a confrontation with Chang (Vithaya Pansrigram), a Buddha-like ex-cop who likes to cut people open with his samurai sword. The film also stars Thai actress Ratha Pho-ngarm as Julian's girlfriend.

Filmed entirely in Bangkok last year, Only God Forgives is about Western self-destruction and Asian mystique. It's also, to an extent, about Julian's Oedipus complex, and altogether it makes it one of the most anticipated movies of the year, despite the mixed responses from Cannes (last month, the film won the top prize at Sydney International Film Festival).

After the Cannes screening, Winding Refn - famed for his portrayal of masculine fury in Pusher, Bronson and Drive - talked to the Bangkok Post about his vision of the city, about art, pornography, violence, Thai karaoke joints, and the mother's womb as the closest thing to God.

Our full review of the film will feature on Friday. 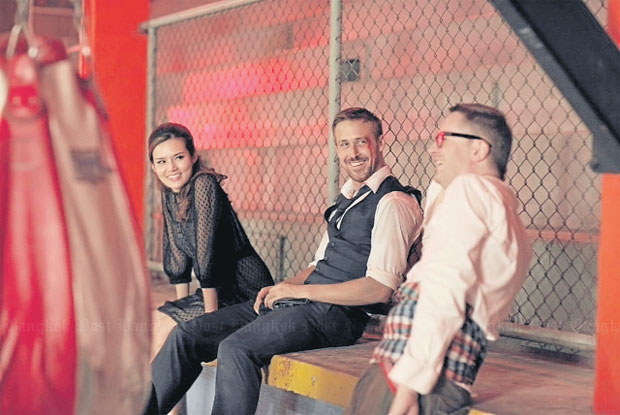 Gosling and Nicolas Winding Refn on the set of Only God Forgives , which was filmed entirely in Bangkok.

Let's start with the obvious. How was the shoot in Bangkok?

Technically, from the production standpoint, the crew was terrific. Not all spoke English, so there was a lot of nodding and smiling. But once you got over that barrier, it's fine. It's just making a movie. Same problems, same scenarios. But I guess the heat in the end made you insane.

What was your perception of Bangkok before you came to shoot the film, and has that perception changed?

I had come to Bangkok as a tourist a few times before. To me Bangkok is a mixture of New York and Los Angeles, I mean the craziness of it, but then I was just a stranger in a strange land. [When I came to shoot] I tried to put myself in a different position than I'd done in my previous films. I want to go somewhere else where I'm forced to do things in a different way. It wasn't until I started seeing Bangkok at night that I really began to visualise the film.

That's why the Bangkok in your film is what it is: a surreal nightmare? 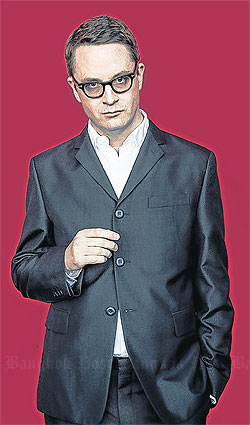 Part of Bangkok during the day is just like any giant city. There are a lot of Thai people instead of foreigners. But Bangkok at night is very, very odd. It's a city of its own and that's when you see real Thailand, that's when you see the real mysticism of Asian culture, which is so alien to a Westerner, because our world is very much based on logic and fact. I felt, or at least I understood, that when you went beyond the reality of Asia or Thailand, there's a whole other ultimate reality that's equally as accepted as everyday life.

What does that mean? It means Bangkok at night is more ''real''?

You use a few Thai pop songs in the film and you also feature many scenes in karaoke bars.

I didn't know anything about Thai music. But one of the things I realised is that karaoke is a religion. Because the film was shot at night, I saw that people go to these places and sing songs all night. It's almost like they live in that world, and it was very intoxicating and interesting and yet so far removed from anything in my logic. But I knew very little about the music.

It was Cliff [Martinez, the composer who scored the film] who talked us into this Isan-style music and I was able to realise that there was a whole tradition of this soul music that's based on fables. There are also sappy Thai songs that are pure sugar [that Cliff and I decided to use].

The film announces itself as a film about God, and it also has an air of mysticism. What's the difference in the Western and Asian perception of mysticism and spirituality?

I think there was a journalist who asked me and wanted a specific answer to certain things [about the meaning of spirituality]. She clearly has a very defined definition of each category, and when those definitions weren't met, they weren't there. To me it's so absurd. I find that in Asia, there's never that harsh definition of each element. In Western society we're so bound by definition and we don't accept anything else that doesn't fit. In Thailand, you can be a professional investment banker and at the same time on your way home you speak to the spirits and you wear things to protect you against ghosts while being on your phone buying a lot of dollars. That to me is so intoxicating.

The movie has many violent scenes. How do you justify that?

Well, art is an act of violence. Art is about penetration. Art is about something that speaks to your subconscious. It's a hard question to answer because I really don't think about what I do. I approach things very much like a pornographer. It's about what arouses me, and certain things turn me on more than others. I can't suppress that and that's how the film ends up. I don't consider myself a violent person, but I surely have a fetish for violent emotions and violent images. Of course I exorcise my demons through what I do. Man was created as a violent creature out of necessity, like any animals. Violence is our instinctive survival tool, our primal basics. When we became more civilised and organised we began to evolve, we began to dispose of these instinctual needs because we're able to meet them in other ways, like politics, countries, knowledge. But we still have the primal urge and instinct, and we call it 'fetish' or we call it 'the darker side'. We still have it, and it's only through art that we can exorcise it without affecting our everyday life.

You say that art is about penetration. That's a masculine point of view. What about women making art? Can women do the ''penetration''?

Even more aggressively. Men aren't as sophisticated as women, that's why ultimate evil comes only from women. Because men in the end will always resolve to physical behaviour, which in a way is so banal. Women can drive you insane, but at the same time, you love them. That's much more complicated and much more interesting. Penetration goes both ways, no matter who you are.

This man/woman issue is interesting because while Only God Forgives is very tough and very masculine, it has a strong female character in Julian's mother. You also mention that the basic idea of the film - about a man who wants to fight God - became more intense during your wife's second pregnancy. What's the relationship?

You realise that as a man you're so useless because the closest thing to God is the womb of a woman. Not being able to control it frightens you. [The pregnancy] was so painful because you didn't know what was going to happen. Women are closer to the experience [of pregnancy]. A man can never try it, and no woman can verbalise it. Theoretically, I wanted to punish the person who was giving you so much grief. But if the womb represents God, then he was the one that I wanted to fight. A womb is the centre of the universe.

Let me tell you a secret. Every man has a complex with his mother. It's the essence of great drama, probably the most difficult subject to tackle. I have a great mother. But I think all men at one point want to crawl back into the womb to figure out the mystery.

How do you feel about the film dividing people into those who love it and hate it? Do you like the polarisation?

Of course. It's the only way you know you've hit a nerve. It shows that what you've done has really penetrated and got something going. Personally, that's a great vanity satisfaction for me.

Has your mother seen the film?

Yes. She said it's the best Asian film made by a Westerner.