New openings and events to look forward to in 2014

Since there are 355 days left before we can resume our year-end slacking mode and most of these days are unfortunately workdays, we want to cheer you (and ourselves) up with a selection of new and exciting things that will happen in 2014. Take out your organiser (that you never think to use) and mark these dates now.

Nothing makes Thais wait in line quite like the opening of already well-known foreign stores on Bangkok soil. Here are three household names from faraway lands that will definitely create a big buzz on arrival.

+ You don’t have to ask friends who go to Hong Kong or Singapore to buy you a precious bag of Chicago’s premium popcorn anymore. Garrett Popcorn will open its first Thailand shop on the ground floor of Siam Paragon on Jan 29. We’ll go as far as predicting that scalpers will set up tables to resell the gourmet popcorn across the street from the original shop like when Krispy Kreme first opened.

+ No need to fly to France for fancy delicacies anymore because Fauchon will open at the end of the month at Groove@CentralWorld (10am-10pm. 2/F, 999/9 Rama I Road, 02-911-0046-7). Since opening in Paris in 1886, the purveyor of fine foods has become a household name for contemporary French fare. They offer pastries, bakery items and other gourmet snacks. They will also feature a grocery and gift section where you can buy savoury or sweet treats such as jam, chocolate and tea that come in nice packages. The 36-table shop will also include a wine bar. 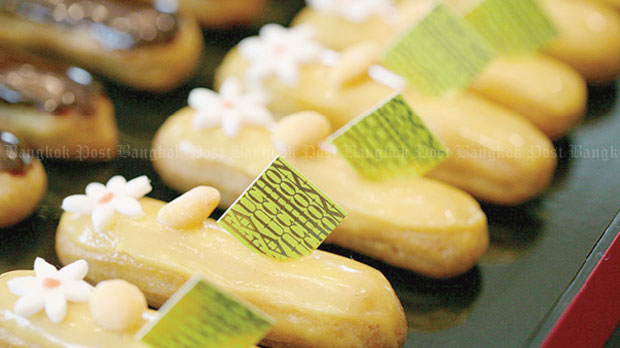 + Another fancy import is British up-market department store Harrods. Harrods Tearoom recently opened on the ground floor of Siam Paragon (10am-10pm. Rama I Road, BTS Siam, 02-683-9300) in Dec. It’s where you can experience high tea sets and main courses such as Squid-ink fettuccine with scallops, shrimps and tomato sauce and Harrods heritage wellington. Three more Harrods outlets will open at Central Embassy, Groove@CentralWorld and The Mercury Ville @ Chidlom (540, Mercury Ville Tower, Phloenchit Road, BTS Chitlom) within this year. However, details of these future outlets haven’t been made official yet. 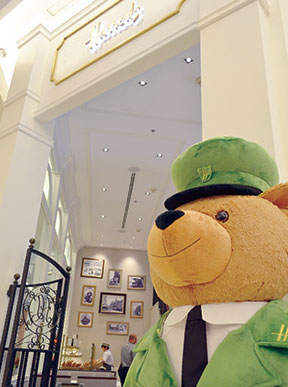 Start saving up (or apply for a credit card) because exciting concerts and events await you.

+ Another concert you can rock out to is Silverlake Music Festival 2014. It will take place at Silverlake Vineyard (31/62, Moo 7, Na Jomtien, Pattaya, Chon Buri) on Mar 1. Headliners include Nine Inch Nails, The Hives, Foals and The Used. Thai bands such as Blackhead and Slot Machine will also perform. Tickets are B2,500; available from www.thaiticketmajor.com or 02-262-3456.

+ American singer and the most illegally downloaded artist of 2013 (which says something about how gorilla-good he is), Bruno Mars will have his first concert in Thailand as part of his Moonshine Jungle Tour on Mar 20. According to the crooner’s official website, the concert will take place at Impact Arena (Muang Thong Thani, Chaeng Watthana Road). At the time of writing, ticket information hadn’t been made available. 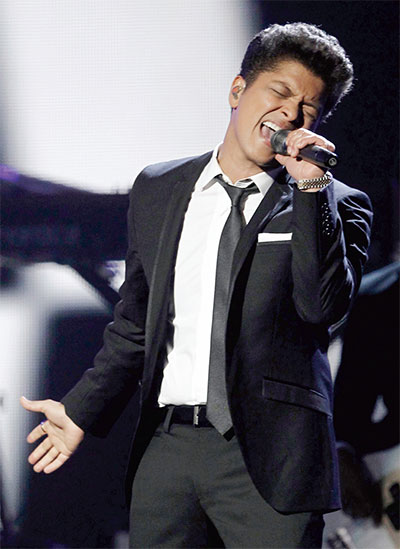 + Thai pop singer Tata Young will put on a big concert entitled Turn Back Time with Tata at Siam Paragon’s Royal Paragon Hall on Mar 22-23. Since her breakout debut in 1995, Tata sure has tons of hits in her repertoire to wow fans.

+ American rock trio Thirty Seconds to Mars will land on Thai soil and rock out on Apr 5 at Bitec. Jared Leto, Shannon Leto and Tomo Milicevic will unleash their uber-energetic live performance here as part of their Love, Lust, Faith and Dreams Tour in support of the band’s fourth studio album of the same name. Make sure you buy front-row tickets in case Jared crowd surfs (and you can touch his body appropriately or not). Go to facebook.com/PMGTHAI to buy pre-sale tickets at B3,000 and enter a lucky draw to win a meet-and-greet or front-row ticket. The pre-sale period is from Jan 18-31. 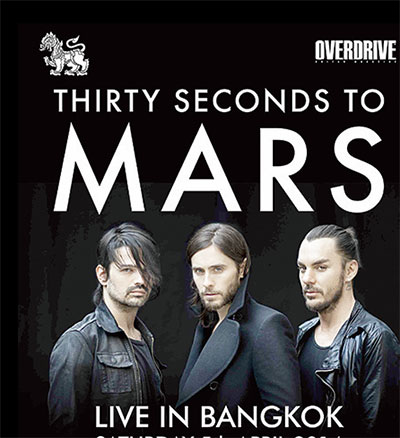 + After headlining at MBC Korean Music Wave here last year, Korean girl group 2NE1 will wow Thai fans again with their songs and sassiness on May 9 as part of their 2014 World Tour. CL, Minzy, Dara and Bom will perform at Impact Arena. At the time of writing, ticket information hadn’t been made available yet.

+ 2014 FIFA World Cup will take place from Jun 12 to Jul 13 in Brazil. If you want to see matches live with your own eyes, consider buying hospitality packages from Venture Sports & Events. Each package consists of match tickets, F&B, commemorative gifts, access to a dedicated welcome area and more. Hospitality packages for opening matches start from B35,783. For group matches, price starts from B22,771. For finals, price starts from B100,843. It doesn’t include accommodation. Call 081-423-6888 for more details.

Buy yourself a really comfortable pair of shoes now because chances are you’ll be doing a lot of shopping at new giant malls. Here are four upcoming venues to appease Bangkokian’s insatiable appetite for malls. 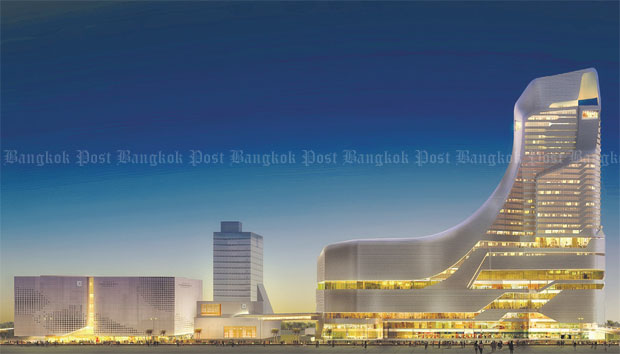 + Soon Bangkokians will be able to take it easy in Samui without forsaking the comfort of a mega mall when CentralFestival Samui opens within the first quarter of the year on Chaweng Beach. Dubbed as Central Pattana’s first theme mall, CentralFestival Samui sits on 37 rai of land and has 90,000sqm of floor area. The decor is derived from Chaweng port and fisherman’s village to give the mall southern flair. Around 200 Thai and international brands are expected to set up shop there.

+ If you live in Bangkok’s western outskirts or in Nakhon Pathom, CentralPlaza Salaya is coming to you around the fourth quarter of this year. It’s located on Boromratchonnanee Road between Phutthamonthon Sai 5 and 7 in Nakhon Pathom. It will offer a botanical feel, being decorated amply with plants and foliage. The architecture is inspired by local arts and culture such as Sanam Chandra Palace and canal-side villages. Over 250 Thai and international brands will be included. 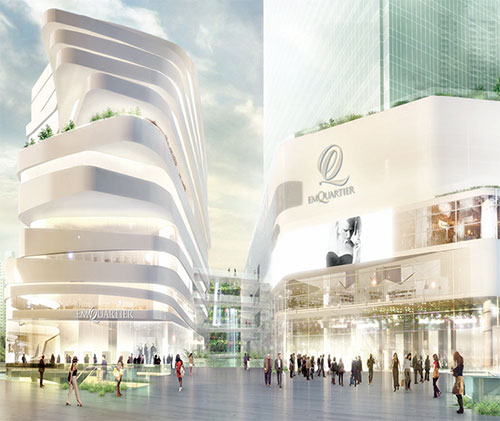 Soon you won’t have to go as far as Chon Buri or Cha-am to have a photo-taking spree at a 3D art gallery. Two are coming to Bangkok so you better find your best angle now.

+ After opening two branches — the first in Pattaya and the second in Chiang Mai — Art in Paradise will soon open on the fourth floor of The Esplanade on Ratchadaphisek Road. It will feature all-new paintings done by South Korean artists you can interact with. The tentative opening date is slated for Feb 15.

+ After opening its first branch at Santorini Park Cha-am, the second branch of Trick Art Museum will soon open on the third floor of CentralWorld. The first phase of the museum is expected to open on Mar 10. Artworks are all done by South Korean artists and incorporated with fancy technology. They will play with your eyes, appearing to have an extra dimension. The new museum is expected to be fully completed by Oct. 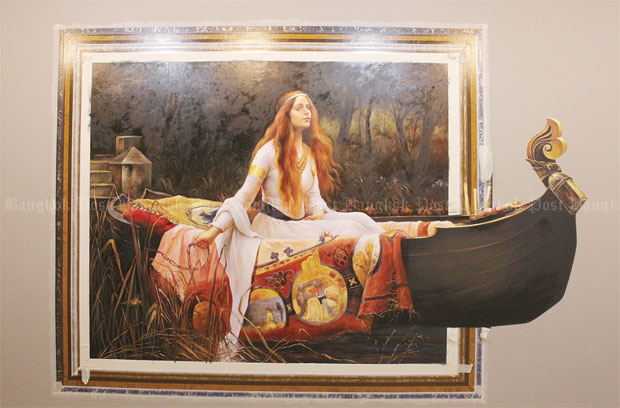