An Asian in disguise

Natee Utarit doesn't always know what day of the week it is.

"All my days are the same. That was why I kept asking every time you called. I get up at 6.30am and get into my studio at 7.30am to start working. I paint and I deal with paperwork. My day ends at 10pm. It's pretty much the same every day, so don't be confused when I ask what day it is because I really don't know sometimes," he said. 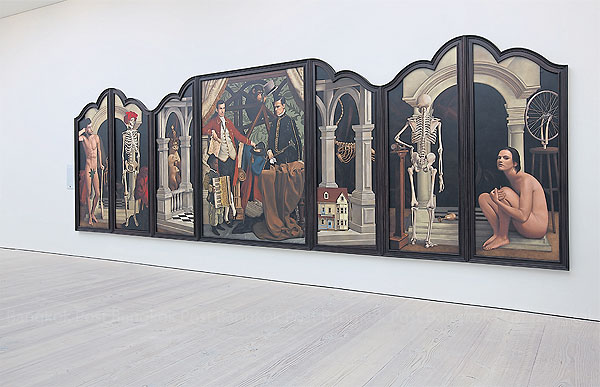 When Adam Delved And Eve Span, Who Was Then The Gentleman?, at Saatchi Gallery in London earlier this year.

The internationally renowned and collected painter has buried his shoulder-length-haired head in frame after frame to finish his ongoing series "Altarpiece", which will wrap up in 2017. He is also handling other contracted exhibitions.

There will be a total of 13 altarpieces in the series. The first two have been shown in Singapore and Malaysia, and earlier this year Saatchi Gallery in London showcased Natee's When Adam Delved And Eve Span, Who Was Then The Gentleman?, a piece inspired by John Ball's famous sermons that ignited the Peasants' Revolt in England in 1381, without much fanfare from mainstream Thai media. The rest of the series will be strewn across the globe in different galleries and museums. When 2017 arrives, all will congregate in a final exhibition, the destination and exact date of which are yet to be disclosed.

"Altarpiece" carries obvious religious overtones with modern interpretations and localised twists. The large-scale altarpieces are true sights for sore eyes — hand-painted in classical traditions as an homage to the old masters, Natee's skills rest on his rare talent, time-honoured craft, scale manipulation, well-researched obsessions and profound chiaroscuro, and also pan out to reveal hidden context and subtle content, a perfect combination of the old and the new — the craftsmanship and the thought-provoking.

"I've been interested in European classical paintings for many years now. I'm very much interested in how an Asian artist tries to emulate such a European craft. There's a bit of colonialism and an attempt to inspect it at work. I believe that most of us Asians have these colonised mindsets. It's very deep-rooted, and we can't seem to get rid of it. I want to connect such thoughts through European classical works on which Asians put such high values. To do that in an altarpiece format is intentional. [The late Thai studies scholar] Michael Wright said we can't understand Western cultures if we don't understand Christianity, and I agree with that wholeheartedly. We always try to absorb only good sides of them but never the failures, and that creates cultural conflict for Thais. We embrace new technology while we still believe in supernatural powers. We're living a collective, awkward, modern life. This series reflects how the Western world perceives us and vice versa," Natee said.

Natee's two latest solo exhibitions, "Illustration Of The Crisis" and "Optimism Is Ridiculous", have travelled to Korea, Singapore, Malaysia, Germany, Switzerland and Bangkok. The painter's work has also appeared in major galleries and art venues around the world, from the 2013 Asian Art Biennial in Taiwan and the Museum of Contemporary Art in Helsinki, to the 2011 Venice Biennale, outside the government-sanctioned Thai pavilion.

At age 44, the passage of time has been kind to Natee. Cloaked in two shades of brown, which complemented his dark honey skin tone, and hanging hair that accentuated his remaining youthful vigour, Natee spoke rather slowly, choosing his words carefully. He is not egocentric nor name-dropping, but high literacy can be easily detected throughout the interview in his studio, where age-old items — sceptres, taxidermy, full animal skeletons — sit alongside paints, frames and works in progress. He also doesn't talk like a self-appointed archbishop of the international art world; his humility nestles within a peaceful confidence often seen in successful people. 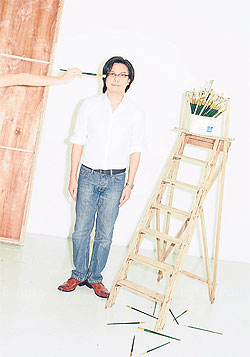 Natee has always known he can draw better than others. His father's dear friend is famed political cartoonist Chai Rachawat, who also happened to live next door. Chai spent his free time teaching young Natee to draw.

"Even back then, when being an artist was looked down upon as a dead end way to make a living, my dad was very supportive in all my childhood artistic endeavours. He often brought equipment and things to me. I didn't excel in anything else — I could only draw. I was a scrawny little kid and my parents probably thought that I was too weak to do anything else. At least there was something I could do very well," he said.

Artistic nurturing continued throughout his junior high school years, after which he was encouraged by his parents and teachers to enrol in College of Fine Arts, a specialised art high school. Natee recalls his shock upon visiting the school, where students, in the ways they dressed and acted, fitted the public perception of aspiring artists. He never was a typical radical art students, he said, but rather timid and academic-minded. At College of Fine Arts, he was mentored by a part-time lecturer, the late artist extraordinaire Montien Boonma, who died aged 47. Montien taught Nadee that composition was far beyond technique and precision.

"He was so full of life, full of energy. I was lucky that he found me endearing; maybe because I was the youngest in the class. Later in life, I was blessed to share part-time supervising duties of degree classes with him at Bangkok University. He was sickly by then. During one class he had a seizure, and I jumped over the table to snap his jaws open," Natee said.

Natee passed an entrance examination to the prestigious Silpakorn University's Faculty of Fine Arts, where he majored in printmaking. Unlike other Silpakorn alumni, he doesn't have wild tales of debauched nights out or other strange stories. Instead, his quiet nature led him to choosing printmaking, where the most studious students resided. After graduation, Natee thought he would continue with printmaking, but a technicality stopped him from pursuing it. He then reverted to his first love, painting.

"I never wanted a full-time job. I wanted to keep on painting, and I solved burgeoning financial problems by taking on freelance jobs on artwork, props and music video production — whatever was needed around production houses. I used that money to support myself and my art. People still ask me today what if I hadn't gotten a break and started selling my paintings, what would my life be like? I'm certain that I'd still be doing the same things — freelancing and painting. I believed if I persisted, I would not fail. If I kept on doing it, I believed it would eventually happen."

Natee's career has always been a gradual rise. There have never been big, bright fireworks that fizzle out as quickly as they come. There's never been any hype, instead a steady flow of output backed by a firm mindset and strong passion. It's always been about taking one step at a time, working extra hard to get where he is today.

"People associate artistic inclinations with being wishy-washy and impulsive, but I don't operate like that. I work with schedules. Responsibility comes before emotion. These so-called artistic emotions are an excuse not to do something — or to do something. You need to work hard, be disciplined if you want to succeed. I've stuck with one medium for so long, but I still feel like I know less about it everyday. I just want to stick with what I have passion for. I've gone through many phases, from conceptual to abstract paintings. I want to emulate the old masters and I want to perfect that craft to the point that no one can tell my paintings are done by an Asian person," he said.

Natee is now represented by Richard Koh Fine Art in Singapore and other international galleries. His artistic system was well in place by 2008, and now moves according to an international art system. Everything he does is handled by his galleries — a method he finds non-restrictive. But even after 20 years, countless exhibitions and sold-out shows, Natee only became noticed locally when he began making a name for himself abroad.

"Everything works like that. It's from this Eurocentric culture where everything they touch is deemed right. I once talked to a gallery about how Asian artists — especially Southeast Asian artists — must work so much harder to get where we stand. Let's say, if you are an English artist, you're automatically viewed as 'international' because it's the Western world that sets standards for everything. But there's a new school of thought now, that the Asian art world is capable of setting its own standards, as there are many good galleries here and a lot of collectors are in Asia. We can set a new standard for art evaluation and artistic values. I think that will create a balance. A lot of galleries I deal with have the same idea. In these five, six years, I will concentrate on this notion," he said.

Asked if he considers himself a rarity, as contemporary painters are a minority in both the fine art and commercial art worlds  — and if being such an anomaly has helped catapult him to his current standing over computer-generated or experimental works — Natee isn't so sure.

"Things change. What is 'painting' now? The notion of painting must be changed and challenged, too. Through object content and context, we need to redefine what a painting is. Skills change over time. In the old days, the ability to create handwork was a much-needed skill. But now I think skills have mobilised. Computer-savvy artists also have skills.

A computer is like a paintbrush to me — they're both tools. Skills have moved, now only the top, but trust me, later the base will move, too. My skills might be completely obsolete in 50 years' time.

"You and I belong to different generations from the current one, so you appreciate my kind of skills!"

Largely absent from art gatherings and social events, Natee prefers not to have a "name" or "brand" attached to his work. He attends art shows, but never on their opening days.

"The only thing I care about now finishing my work for 'Altarpiece', and getting it done on time. I don't have time to think about other things." 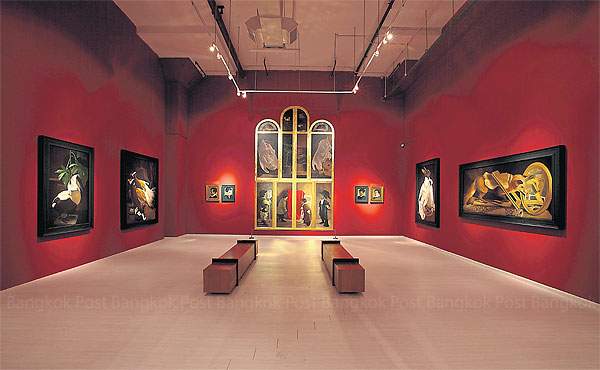