National artist and writer Sanee Saowapong died on Saturday of natural causes at Bangkok Hospital. He was 96. 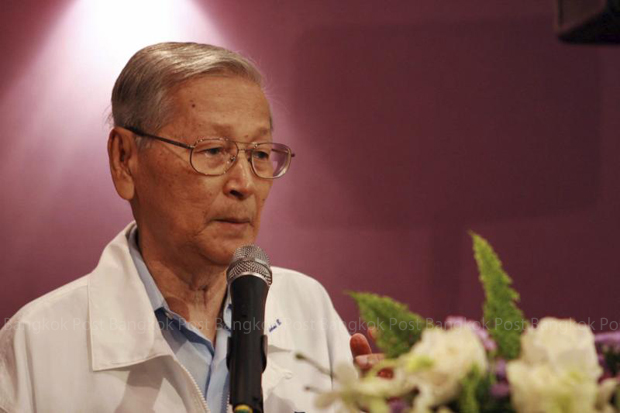 Sanee Saowapong, shown above in 2009, once declared: "Behind the pen that creates the literature is the writer, and behind the writer is the society."

A bathing rite will be held at Wat That Thong at 5pm on Sunday, his daughter said on her Facebook page.

Sanee Saowapong is the pen name of Sakchai Bumrungpong, a former diplomat whose ambassadorial postings included Burma and Ethiopia. Best known for his novel Peesat (Evil), the native of Samut Prakan province was also a renowned journalist.

He was named the first winner, in 1988, of the Sriburapha Award, established in honour of Kularb Saipradit, whose pen name was Sriburapha, to recognise excellence in journalism, writing and the arts.

Sanee was named a national artist in literature in 2010. His wife Kruephan died on July 1 this year. He is survived by four daughters and sons.