It's a continuous run on the treadmill for art collectors and design devotees when the art fair season kicks off in January. March is undoubtedly a peak period, with exhibitions going on every weekend. The most prominent one in Asia, Art Basel Hong Kong, something of a high-end art supermarket, wrapped up on Tuesday. The fair saw over 3,000 artists around the world touch down at the gateway to Asia for the third year to beguile the moneyed and style-savvy art connoisseurs.

Besides being an opportunity for the slick-haired hi-so crowd to do their art shopping, Art Basel Hong Kong is also of utmost importance for the 233 participating galleries, artists and fans of art to mingle with international curators and museum directors who unerringly add the event to their annual schedules.

All the big players from the West were in Hong Kong to expose themselves to the Asian (in other words, Chinese) market. The other half, the Asian presence, included galleries from Hong Kong, China, Japan and India, who seemed to be leading the pack.

But how did Southeast Asian art fare in this high-profile showcase?

100 Tonson Gallery, was the only Thai gallery present at Art Basel Hong Kong. Created especially for this event, Yuree Kensaku's massive 160x800cm collage painting and other bits and bobs that come with it — When The Elephants Fight, The Grass Gets Trampled — is selling for a whopping three million baht. Don't flinch though, because considering the magnitude of this fair and the VVVIPs that grace it, that price is quite affordable.

Among the Asean booths, Singapore, the self-proclaimed godfather of Southeast Asia art, enjoys possibly the largest occupancy at the fair, thanks to their strong government support. But, at a time when international borders have blurred in the art world, even state support is selective and motivated by many factors. 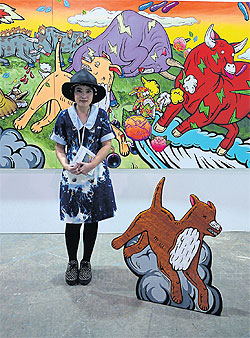 When The Elephants Fight, The Grass Gets Trampled by Yuree Kensaku from Thailand.

"It's a matter of cost and for a Thai gallery to come here, it's an investment," said Can Yavuz, owner of the gallery. "I'm not saying Singaporean galleries have more resources to do that, but their government is very focused on supporting the exposure and education of arts from Singapore worldwide. Singaporean galleries can bring a lot of Singaporean art because they can then get certain benefits like a grant or shipping support. I don't get any though, because I'm presenting art by a Thai artist!"

For her first solo exhibition at Art Basel Hong Kong, "Conversation in the Garden", Pinaree decided to work in both 2D and 3D with stunning pieces, such as a hammock made of glass beads and futuristic sculptures shaped like breasts and stupas, her signature motifs. Whereas most art pieces are off-limit to the hands, Pinaree's work is one of few that invites the sense of touch.

"Being here, the atmosphere is really different from the other art fairs out there," the 54-year-old artist says. "They're quite selective here but if you don't pass the selection, you can't be part of Art Basel even if you do have the money to pay for it."

It's evident that the Asean region is under-represented, but Lim Wei-Ling, director of Malaysian gallery Wei-Ling Gallery, does not necessarily see this as a bad thing. "If the fair is not well curated, with no proper selection process and was driven primarily by exhibition space, then you'll have a fair with anything and everything and everyone represented," she comments. "I think this is what makes Art Basel stand out, because they're very particular about the quality and standard of the artists. That's why it's such a draw for galleries and many want to partake in."

"Private galleries play a really big role in Malaysia," says Anurendra Jegadeva, an artist with Wei-Ling Gallery. "Profiling Malaysian artists should be the job of institutions, but there's not enough funding or a priority for it."

The gallery has been running for 13 years now, but without a doubt, Malaysia's art scene is still relatively young. It's promising that new collectors are coming up and, according to the gallery director, getting more discerning, and collecting for the right reasons.

"[Malaysian] Collectors are willing to look beyond the decorative piece for the wall and this encourages our artists to make more challenging and difficult installations," says Lim. "It helps that there's an Art Basel in Asia. It means there is interest and that the world is looking East and helps put Malaysia on the map."

As the work of her artist is not really what someone will pick up for their living room, Lim believes that being at the fair is much more about taking advantage of the marketing platform. "It's cost-intensive, but how can a gallery move forward to show their artists and what they're capable of if you don't invest? That's how I look at it."

Yet for all the people out there trying to network, mingle or sell something at this world-class gathering, the whole point of Art Basel is to enrich the senses with the cream of the finest, platinum art crops the world can offer. Enjoying art, even in a refined place like this doesn't have to be elite or complicated, as Yuree, the Thai artist with Tonson Gallery, concludes with a giggle. "You see, I just want to look at other people's work to be entertained." 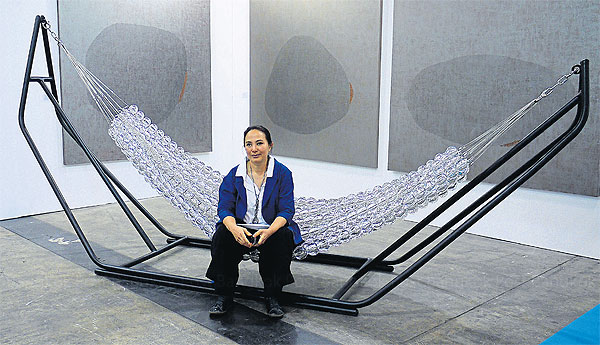