Sporting a white T-shirt and jeans with a scarf around his left wrist, the long-haired Pongpat Wachirabunjong, 53, maintains the rocker look of his younger years.

On air since March, the series, based on five related novels has drawn a lot of interest with its mix between a love story and Chinese-inspired motifs. Its main characters are five heirs to different businesses founded by their fathers who immigrated from China for a new life in Thailand. Their endeavour, diligence and perseverance drive them to business success and to command gangs in the Chinese communities.

The airing of the saga has now come to Raed, starring Andrew Gregson and Nattaporn Tameeruks. The last part, Hong, will premier in the last week of the month.

"From the title, Lued Mangkorn, people perceive that it's an action drama about the Chinese mafia when at heart it's a series of five love stories with different takes on romance," said the director.

Channel 3 is known for its big-budget blockbusters such as See Huajai Haeng Khun Khao and Suparbburut Chutathep, involving four to five production houses working on the same serialised stories. The TV station however entrusted Pongpat alone to produce Lued Mangkorn.

"Under one production house, the five dramas share the same artistic direction," said Pongpat. "There are many producers on the Channel 3 planet, and no one is better than the other. My wife has her way of producing drama, which is different from, say, Warayuth Milintajinda. It's like how two artists have different painting styles." 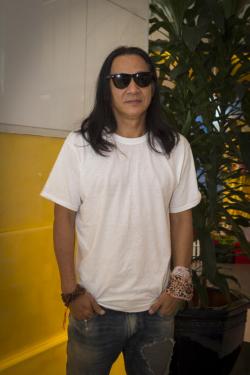 Making TV dramas is a collaborative effort, he added, involving many departments and combining artistries, such as those from acting, directing, costume, editing and lighting.

"Even props are important. The prop department had to find a lot of nostalgic objects for Lued Mangkorn, which is set in the late 1950s," he said.

Named after creatures, each of the serialised parts — Tiger, Lion, Gaur, Rhino and Swan — symbolises a certain trait of the characters. For instance a rhino represents perseverance.

"The series should relate well to to Thais of Chinese descent," Pongpat deemed. "But it's a good mix of different flavours to attract a broader audience."

Krating (Gaur) becomes more intense with its tale of betrayal whereas Raed (Rhino) is more lighthearted as a romantic comedy. The series will round off with the high-drama Hong (Swan) about an impossible love between a bodyguard and his mistress.

Apart from Singha, Pongpat directed the other four dramas as well as taking the role of a Chinese sage. As a musician, he also sings Raed's theme song.

The simultaneous filming of the dramas did not confuse the multitasking director, who often improvised on the set to intensify the characters and plot.

"In one day, I directed three parts of the Lued Mangkorn series, not to mention acting in it myself. That's a world record for a TV director," he joked. "It was easy to switch from one production to another because of the difference in styles."

Another reason for the popularity of the series is the five lead actors. The show goes for seasoned actors over the age of 30, namely Ananda Everingham, Jesdaporn Pholdee, Theeradej Wongpuapan, Andrew Gregson and Janie Tienphosuwan.

"We began producing TV dramas [in 2003] by doing what we wanted to do, which was ahead of time. TV viewers then may have thought, 'What on earth are you doing?'," he said of his production house. "We now give the viewers what they want to see, but this doesn't mean that the Thai TV industry and our series are going nowhere. We do introduce new things by incorporating crazy ideas in some scenes, but not the whole production."

Pongpat tries to touch upon new elements, in terms of culture, tradition and social issues and then incorporate them into the productions. Thai series often gets bad press, but as much as he wants to improve the quality, Pongpat knows that he can't just turn soap operas into documentaries.

"Our productions may attract a certain group, not the whole country," he said. "Ratings depend on the audience, whether they have an affinity with our productions or not. What we can do is work hard on our artistry and respect the law of cause and effect."