The SEA Write Award 2015 has been won by the novel <i>Saiduan Ta Bod Nai Khaowongkot (A Blind Earthworm In A Labyrinth)</i> by writer Veeraporn Nitiprapha.

The SEA Write Award committee announced the winner on Thursday at the Mandarin Oriental hotel. 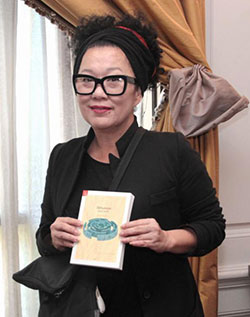 A Blind Earthworm In A Labyrinth was one of the best-reviewed books of last year. The story takes on the oldest form of popular reading, a love triangle, but what elevates it beyond a romantic drama is the strong political backdrop and her evocative description of food, as well as music, according to the reviews.

Veeraporn, 53, who described herself as mother of a son and four moody cats, said she was inspired to write the novel four years ago by the confusion permeating Thai society during the army crackdown on red-shirts in 2010 and reports of agonised love in tabloid magazines.

It is her first novel.

In the SEA Write committee’s opinion, the novel reflects the failure of life management of people in society, a confrontation between illusion and idealism in the Thai family institution, and displays insight into beauty of various art forms, including natural beauty.

It gives a reverse example for new generational people to release themselves from intellectual blindness and the state of being faithless in life, the statement said.

Besides writing and being a housewife, Veraporn said she also grows trees, sells goods on the internet, and works in the area of art and design.

The Sea Write Award is given on alternate years for novels, poetry and short stories. This year's award was made in the novels category.