Imagine a room full of red-lace bras, packs of condoms and a dancing pole -- did we just wander into an illicit, red-light district somewhere? No, these items are brazenly displayed at perhaps one of the most unusual museums in the country: This Is Us -- Empower Foundation's Museum of Sex Works in Thai Society.

Taking Life on a tour of this unique museum was Chantawipa Apisuk, director of Empower Foundation -- an NGO which assists and educates sex workers in Thailand. The museum is on the third floor of the foundation's office on Tivanon Road in Nonthaburi, halfway between Big C Tivanon and the new MRT Ministry of Health Station on the skytrain's Purple Line. The museum has been opened unofficially for years. Chantawipa said she's been waiting for the skytrain to arrive before finally opening the place to the public.

This Is Us tells the history and lives of sex workers in Thailand. Inside the museum, which displays in one room, visitors can find a dance platform with a metal pole, a minibar, a karaoke machine, a bath tub, condoms, sex toys, a boxing ring and more -- all with the stories of how the prostitution industry in Thailand has evolved over the years. From brothels out of the Ayutthaya period to go-go bars, coyote bars, aab ob nuad (bath houses) and more, this museum collects and displays ideas rather than merely "old stuff", as the foundation's director puts it.

The items exhibited have been collected from more than 30 years of the foundation's work and efforts to bring more opportunities to sex workers.

"We don't want our passing years to go to waste, so we've been categorising our knowledge and information in order to pass it on to the new generation, who would carry on our work," she said.

A portion of the museum is dedicated to the display of papier-mache dolls called Kumjing -- a representation of illegal Burmese migrant workers as part of the Labour Sans Frontieres (Labour Without Borders) project. As a human-rights activist, Chantawipa and her husband, Chumpon Apisuk, who serves as the project's co-founder, have been on a mission to create Kumjing for more than a decade. Aside from advocacy work, the foundation also gives language and non-formal lessons to educate sex and migrant workers in many of its centres across the country.

According to Chantawipa, there are about 300,000 sex workers in Thailand, both Thais and foreigners. Prostitution is condemned and even criminalised in many countries around the world. Some people have linked it to human trafficking and the spread of HIV/Aids. Most sex workers have no access to social benefits like healthcare and are treated unfairly by the public and officials alike, as they are labelled uneducated and immoral.

"People believe only bad women are engaged in this type of work, but I only know breadwinners who can afford to pay their father's hospital bills, support their brothers to enter the monkhood and even the military, and send their kids to good schools," Chantawipa said.

In countries such as Austria, the Netherlands and Germany, sex work is legal and regulated, and workers even receive benefits from the government as their job is recognised, their taxes paid. Meanwhile, most countries, including Thailand, prostitution is illegal.

Before, since its beginning in the Ayutthaya period, prostitution was legal and state officials ran elite brothels with proceeds going back to the government itself. Sex work was later criminalised in Thailand in 1960.

The Thai legal system is, however, caught in a paradox. While the law criminalises sex work, the country is famous for its red-light district and sex industry. Any farang can testify to that. Thai men would also testify to the infamous aab ob nuad, where they receive "happy endings". These bath houses are legal.

"If you have money, you can do all kinds of business around here," commented Chantawipa.

The Empower Foundation, said Chantawipa, has been around since 1985. And after more than three decades of working with sex workers, she let on that progress has been slow. The problem with negativity, she said, lies with people's attitude and belief. The law has a better chance at changing than the people.

"We've been through 11 governments -- elected, appointed and by coup -- and yet nothing has changed. People are still arguing over whether to make prostitution legal," she observed.

"These sex workers are just like those working in other professions. They shouldn't be punished for making money to feed themselves. They only lack opportunities, which made them undertake these works in the first place."

Chantawipa hopes that sex work will be recognised as a legal profession, meaning the workers would be protected under labour laws.

"Currently, sex workers are not equal with their customers and employers. If we could change pimps to employers and so pay nee [prostitutes] to employees with labour laws covering them, then if there is a dispute, the law can step in and not leave the problem to manifest between a victim and someone in power, like how it is right now."

If the labour laws are fixed, Chantawipa said it'll also elevate the status of clients to that of consumers entitled to a standardised service, which could improve the standard of the Thai sex industry as a whole and make it safer for everyone.

"To make prostitution legal, we don't even need a law to say it's OK to do it. Just cancel the existing law, decriminalise it and we'll be fine. And then we can discuss what sort of rights the workers would be entitled to. Can they ask for a study or house loan? What about social security? Can they apply for it?"

While the foundation continues its campaigns for justice and equality, Chantawipa admitted that not all sex workers are actually thrilled about the possibility that their profession will be recognised by law.

"Nobody wants the minimum 300-baht wage. They would rather have 3,000 baht. And some believe the social security welfare is not that reliable anyway," she said. Looking beyond monetary gain, the legalisation of prostitution would prevent the arrest of sex workers and other ill treatment and injustices that befall them.

Chantawipa suggested people should recognise and accept that sex work is actually beneficial to the country's economy rather than just bashing it with such negativity and criticism. Billions of baht that circulate our economy each year originate in prostitution.

"Our tourism authority never sees the sex industry as an asset," said Chantawipa.

"If you want to know how much this industry supports our country's tourism, get sex workers to go on strike for a day. Everybody would lose it."

This Is Us is set to open officially around mid-August, from Wednesday to Friday, noon-7pm. Admission is 100 baht. Visit empowerfoundation.org. Call 02-526-8311. 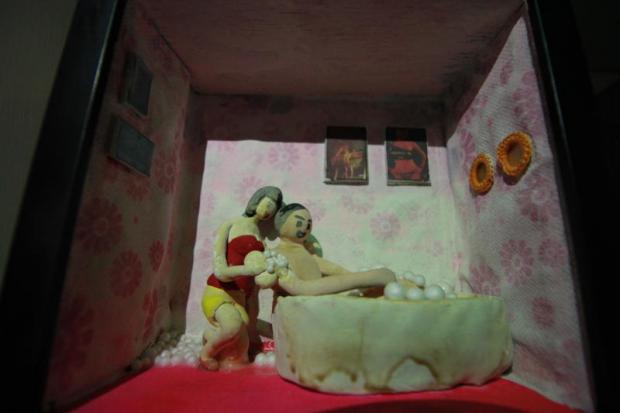 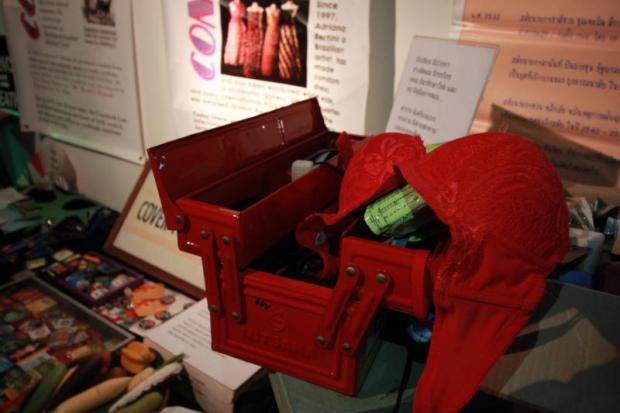 As with other professions, sex workers have their own tool box, which may include a bra, condoms and beauty accesories. Melalin Mahavongtrakul

'Like a dream': Japanese grandpa draws in following as art YouTuber