As per tradition, wood from the fragrant but dead standing kalamet tree will be used in the funeral of HM King Bhumibol Adulyadej

published : 28 Nov 2016 at 04:30
newspaper section: Life
writer: Karnjana Karnjanatawe
National park officers guard the sandalwood tree during the pre-cutting ceremony. After the ceremony ends, some people came to pay respect to the tree by offering wais on its trunk while many took offerings including flowers, holy threads, bananas and small parts of bark. Photo: Krit Phromsakla Na Sakolnakorn

The tree is about 15m-tall. It stands in the forest of Kui Buri National Park in Prachuap Khiri Khan, 280km south of Bangkok. Its branches spread out, but they do not have a single leaf.

The tree is dead, and it is one of 12 lifeless-yet-standing mai chan hom, known commonly as kalamet, a fragrant and auspicious tree to be cut and then used as a material in the royal funeral of His Majesty King Bhumibol Adulyadej which is expected to take place late next year.

"Mai chan hom is a royal tree," said Anandha Chuchoti, director-general of the Fine Arts Department. "It is our tradition to use the tree for making royal urns for kings or royal families. It is a custom that can be traced back to the Ayutthaya period."

Historical records show that kalamet -- which is sometimes confused with its relative sandalwood -- was first used for the cremation of King Naresuan in the 17th century. In addition to making royal urns, the wood from mai chan hom was also used throughout history for the construction of Phra Merumat, or the royal crematorium, the palace-like structure in which the royal urn is housed.

"The royal urn and Phra Merumat for His Majesty must be grand and majestic," said Anandha, adding that the design has been completed by its Office of Traditional Arts. The department expects to have kalamet boards delivered from Kui Buri National Park to the Office of Traditional Arts in Nakhon Pathom by December. The construction of the royal crematorium will begin in February, said the director-general.

Phra Merumat will be built on the grounds of Sanam Luang, a vast green field to the north of the Grand Palace. A spiritual as well as historical landmark of the city, Sanam Luang has been used as the funeral ground of kings, queens, princes and princesses since the beginning of the present Chakri dynasty of the Rattanakosin era. The last time Bangkok saw a royal funeral pyre was at the cremation of Her Royal Highness Princess Bejraratana Rajasuda in April 2012.

But the royal cremation of His Majesty the King will be a majestic farewell unprecedented in scale and historical gravity. The last time a Thai king was cremated was 66 years ago, when King Ananda Mahidol was cremated in March 1950 at Sanam Luang.

The exact spot will be announced within the second week of January, according to the Deputy Prime Minister Gen Tanasak Patimapragorn, the chairman of the committee supervising the construction.

The committee expects the construction to be completed by September 2017. 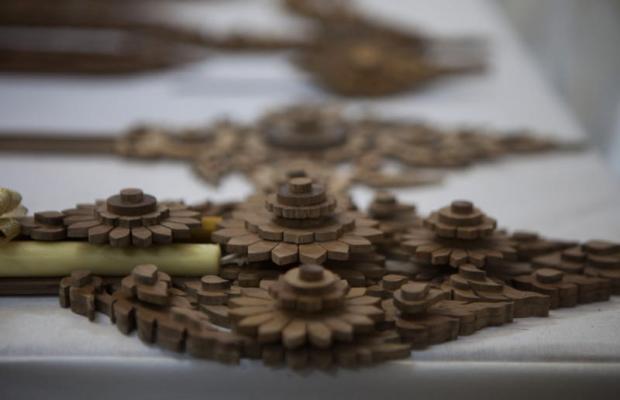 Samples of work for a royal urn at the Office of Traditional Arts in Nakhon Pathom. Photos: Pawat Laopaisarntaksin

On Nov 14, a Brahmin priest performed a blessing rite and Wud Sumitra, deputy secretary-general of The Office of His Majesty's Principal Private Secretary, marked 12 kalamet trees at Kui Buri National Park, heralding the first step in the long preparation process of the royal cremation. 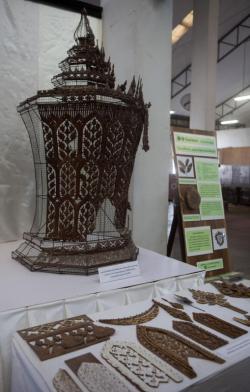 Samples of work for a royal urn at the Office of Traditional Arts in Nakhon Pathom. Photos: Pawat Laopaisarntaksin

Because of the taxonomy, the kalamet is sometimes confused with the sandalwood tree. Both of them are known generally as mai chan in Thai.

But based on the botanical encyclopedia Thai Plant Names by the late Prof Tem Smitinand and published by the Royal Forest Department, kalamet is listed in the Sterculiaceae family and in the Mansonia genus. Its scientific name is mansonia gagei drumm.

Sandalwood, on the other hand, is in the Santalaceae family and in the genus of Santalum. The sandalwood tree is known as mai chan hom India in Thai.

"The wood for making the royal urn is always mai chan hom [kalamet tree]. We don't have mai chan hom India [sandalwood tree] in the park," said the park chief.

There's more arboreal confusion. Many people relate mai chan hom with another plant called kritsana, which is also known as mai hom, meaning fragrant wood. Kritsana's botanic name is agarwood (Aquilaria malaccensis) and is listed in the Thymelaeaceae family. The tree produces fragrant resin caused by fungal invasion into its crevices. Agarwood oil is regarded as the king of perfumes.

Kalamet and sandalwood can also be extracted for fragrant oil. The oil is also used for producing perfumes, cosmetics and medicinal preparations. The high quality oil is found in the heartwood or the centre of slender trunks of mature trees aged at least 60. The fragrance of both kalamet and sandalwood can remain in the trees for years after they have died.

For centuries, the fragrant oil has made these trees valuable. While Thailand uses kalamet trees for making urns and royal palaces, the Burmese use them to carve Buddha images. The Chinese prefer to use sandalwood for producing luxury items such as inlaid boxes, combs, fans and incense sticks, and upper-class Indians often use sandalwood logs for building pyres. 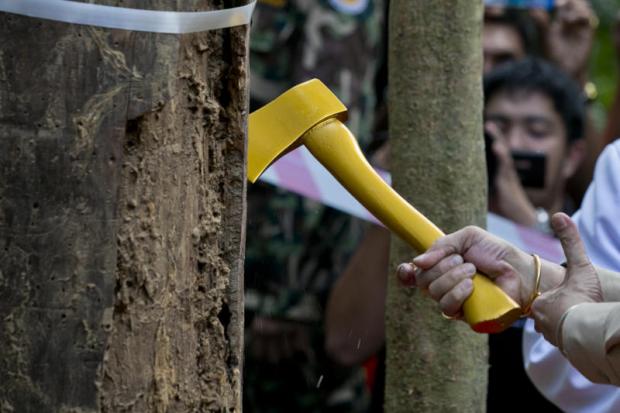 This golden axe has been used for the pre-cutting ceremony since 1996. Photo: Krit Phromsakla Na Sakolnakorn

The tree and the royal urns

In Thailand, the kalamet tree is protected by the Forest Act BE 2484. It is listed in a specially prohibited wood, meaning cutting or logging of the tree is prohibited unless permission is granted by the minister of the Natural Resources and Environment Ministry.

This means anyone can plant the tree, but they can't cut them down even if they are planted in the growers' properties, unless they obtain permission to do so.

The first was for the late Princess Mother in 1996. The second time the trees were used was for making the royal urn for Her Royal Highness Princess Galyani Vadhana in 2008. The third time three kalamet trees were cut for making dok mai chan, or artificial flowers used in cremation rites, and other items for the ceremony of the late Supreme Patriarch Somdet Phra Nyanasamvara Suvaddhana Mahathera in 2015.

"The trees used in those ceremonies were all older than 100-years-old," he said.

The royal urn of His Majesty will mark the fourth time the kalamet trees from Kui Buri have been used. The age of the trees will be verified by the Forestry Faculty of Kasetsart University later.

The park officers will cut and process the trees by next month. Based on the requirements of the Fine Arts Department, the national park chief believes that four out of 12 kalamet trees in the pre-cutting ceremony on Nov 14 will be enough for the royal ceremony. (During the pre-cutting ceremony, nine kalamet trees were planted in the park. Each tree is about five-years-old.)

The chief would not give the exact date of the tree-cutting event, explaining that the image of trees being cut down might look unbecoming for national park officers. In addition, he has a concern about safety when timber falls to the ground.

According to Charin Chayarun, chief of craftsmen of the Office of Traditional Arts, all wooden boards from the trees must be thoroughly dried otherwise the shapes of fretwork will be distorted.

The office asks the national park to process kalamet logs into thin boards with the thickness in the range of 2-6mm. Each board will be carved like a paper pattern in minute detail. For example, making a flower will require two layers of carved wooden petals and another two layers for round pollen. Each piece will be carefully glued together to be a complete flower before being attached to the metal frame of the royal urn.

The office says that it will also allow some members of the public who have skills in craftwork to participate in the process of making the urn for HM the King.

After the royal cremation, the royal urn is expected to be kept for an exhibition in the National Museum Bangkok like the previous royal urns of the late Princess Mother and Her Royal Highness Princess Galyani Vadhana.

The kalamet tree is mai chan hom, a close relative but not the same as the sandalwood tree, which is in the family of mai chan hom India.

Kalamet wood from Kui Buri National Park will be used in the construction of Phra Merumat, or the royal pyre, for the cremation of His Majesty King Bhumibol Adulyadej. Construction will begin next February and finish in September. This is the fourth time kalamet trees from Kui Buri have been used for making royal urns and pyres.

The kalamet tree is protected by the Forest Act BE 2484. Anyone can plant it but cutting it down requires permission of the authorities.