Princess Vibhavadi Rangsit lived a fruitful life as a mother, author and lady-in-waiting to Her Majesty Queen Sirikit, until her tragic end in 1977. Tomorrow is the 40th anniversary of her death

'My Dearest Khun Prisna, I am now in one of the most beautiful places. Our hotel's name is 'Castello del Sole' (Castle of the Sun). Isn't it chic? The name is like one in a fairy tale. This town is so cute. It has a bright-coloured lake and nice houses on slopes. Routes and paths criss-cross the hills. Colourful flowers blossom everywhere ..."

HRH Princess Vibhavadi Rangsit was lady-in-waiting of Her Majesty Queen Sirikit during the state visits to 25 countries and accompanied the royal family to visit people all across Thailand. Photos courtesy of the Vibhavadi Rangsit Foundation 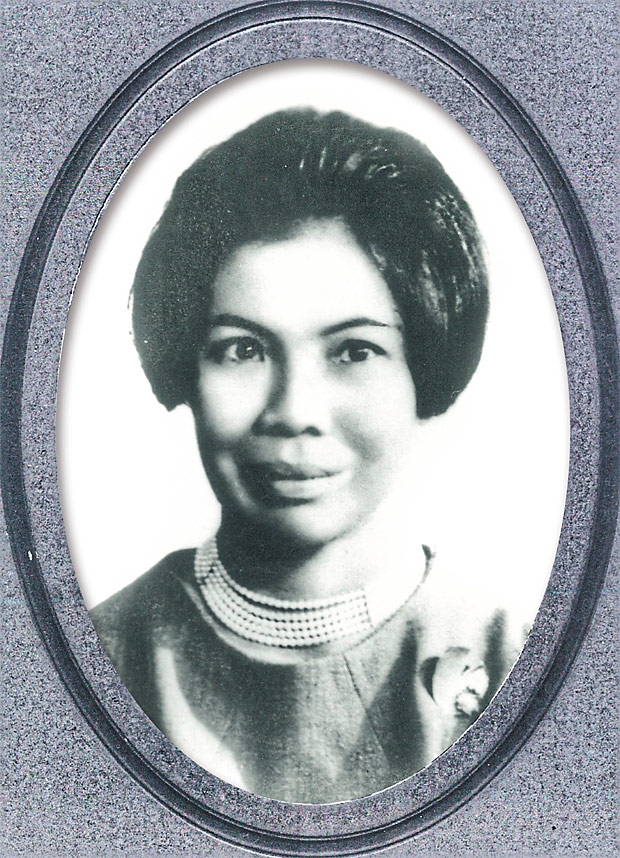 Princess Ratnavadi, the main character in the novel Ratnavadi, wrote those sweet sentences. Ratnavadi was penned in 1953 by V. Na Pramuanmarg, the pen name of Her Royal Highness Princess Vibhavadi Rangsit, based on her honeymoon diary in 1947. It is among the best-known of her many novels, along with Prisna and Anond's Bride. Their depiction of the high life and romantic drama have remained popular for over half-a-century, with countless television adaptations, and they make girls dream of encounters with prince charming and everlasting happy endings

Unfortunately, real life is not a fairy tale. Thirty years after their honeymoon, on Feb 16, 1977, Princess Vibhavadi Rangsit died in a tragic attack when communist insurgents shot the helicopter in which she rode trying to bring two wounded border patrol policemen to a hospital in Surat Thani. As a tribute to her selfless devotion to the Thai people and to the Kingdom, the princess was later elevated to the higher rank of HRH Princess via royal command. In her honour, a then-new highway between Din Daeng and Rangsit was named Vibhavadi Rangsit Road. 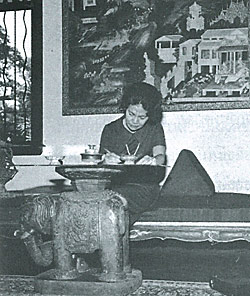 HRH Princess Vibhavadi Rangsit was a famous author. Below are her works Prisna and a copy of her favourite novel, Ratnavadi.

HRH Princess Vibhavadi Rangsit was born Her Serene Highness Princess (Mom Chao) on Nov 20, 1920, to her author parents His Highness Prince Bidyalongkorn and HSH Princess Princess Pornpimolpan Rajani (Voravarn). Educated at Mater Dei School and the Finishing Course in Bangkok, she worked as a secretary for her poet father, who wrote under the pseudonym "Nor Mor Sor".

Inspired by her father's outstanding literary works, the princess loved to write, and her talent started to shine at the tender age of 14 when she began to write a novel for children, Naughty Kids, using the pen name V. Na Pramuanmarg. During World War II, she penned her famous first novel when she was only 18. She even ran into the printing house being razed by a fire to save the manuscript of Prisna, probably one of the best-known works of popular literature in Thai history.

The heroine, Prisna, and the hero, Prince Pojpreecha, coincidentally are similar to the author and her future husband in various ways, although they had yet to meet when the book came out. For instance, both Prisna and Princess Vibhavadi are playful but obedient to elders, love a white tulle skirt for evening parties and have a flower brooch given by their mothers on their birthdays. Both her husband and Prince Pojpreecha are smart, intelligent, kind and fluent in English, French and German. The novel was a big hit and was followed by two sequels along with many other romantic and historical novels.

"My mother was my inspiration. From childhood she encouraged me to read books and I became quite a bookworm," MR Priyanandana Rangsit, the princess' youngest daughter, recalled in an interview with Life. "Of course, my favourite Thai books are her early novels, the trilogy: Prisna, Ratnavadi and Chao Sao Khong Anond (0Anond's Bride). Nick And Pim, a very imaginative novel about two dogs writing letters to each other, thus leading to a romance between their respective owners, is also a favourite. Having been brought up surrounded by dogs, my mother knew how a dog can have thoughts, such as hating our perfume but loving things we consider smelly. We have a big library of old books at home." 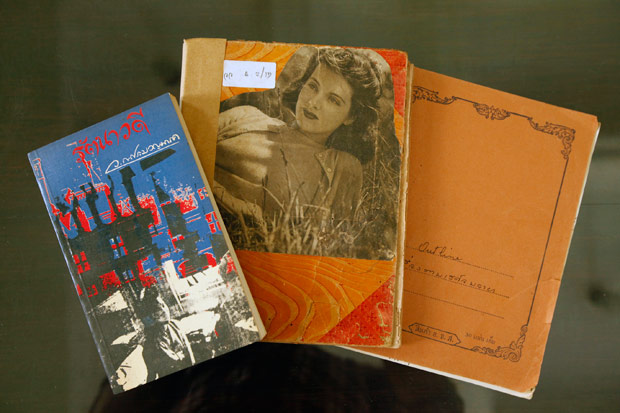 In 1946, the princess married HSH Prince Piyarangsit Rangsit, the eldest son of HRH Highness Prince Rangsit Prayurasakdi, Prince of Jainad. They were the only couple ever to have been married by His Majesty King Ananda Mahidol (Rama VIII).

"My parents met at a ball at Ambhara Garden. My father was fond of her, so he applied for membership at the British Club in Silom so that he would be able to park his car in front of Pramuan Palace [where the Princess lived with her father]. He often dropped by at the palace to sip tea and they shortly tied the knot," MR Priyanandana said. "My father was handsome and had Thai and Western blood. Other people said my mother was similar to Prisna."

Apart from bringing up her two daughters, MR Vibhanand and MR Priyanandana, and tending to her writing career, the princess began to serve Their Majesties King Bhumibol Adulyadej and Queen Sirikit in 1957. She accompanied them when they visited 25 countries on seven occasions.

"She was brilliant at dividing her time and was very disciplined. While she was very busy serving Their Majesties the King and Queen and led a very active social life, she still found time to research and write her novels every day. She was beginning a historical novel about Richard III when she died. 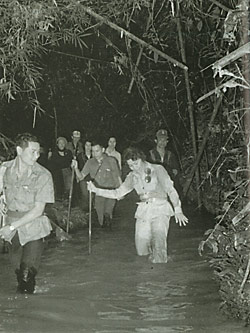 "She was also a most gracious hostess, and the life and soul of our house," her youngest daughter remembered. "She kept a book on the guests they had for dinner, and the menu was never the same. She was a great mother. She found time to write to us even when she was accompanying Their Majesties the King and Queen on state visits. She was always concerned about our exam grades, etc. When my sister and I were studying abroad, she always wrote letters to us in Thai so that we would not forget our mother tongue."

The last decade of the princess' life was devoted to rural development in the south of Thailand under the direction and support of King Bhumibol. Her work began when the King asked her to visit a remote area called Phra Saeng in Surat Thani in 1967. Since then, she was committed to working to develop the upcountry and improve villagers' standard of living. Sponsored by the King, the Princess led a team on missions to distribute medical supplies, educational equipment, blankets and other necessities to those in need, especially in the South. She was never discouraged by the hardship of travel and even had to wade through flood water, ride a motorcycle, boat and elephant to reach destinations. Wherever she went, she noted down the villagers' grievances that were hence resolved by authorities. At the request of HM Queen Sirikit, she also promoted local handicrafts to allow women to earn extra income.

"Mother had fantastic stamina. During the last 10 years of her life, she represented King Bhumibol on visits to remote and inaccessible rural areas with the royal medical team. The trips were long and arduous, full of hardships, but she never complained," MR Priyanandana noted proudly.

Without fear for her own safety, the princess frequently visited soldiers and border-patrol police in troubled areas. On the morning of Feb 16, 1977, she was on a routine mission to visit villagers and troops in Wiang Sa, Surat Thani. She was in an army helicopter when she heard on the radio that two border-patrol policemen had been wounded by a landmine explosion. As she wanted the injured to receive medical treatment as soon as possible, she told the pilot to change the flight route and take them to a hospital. As the chopper was flying low over Ban Nua Khlong, it was ambushed from the ground by communists. Machine-gun fire fatally wounded the princess and she died an hour later. Her tragic death shocked the entire nation and she was mourned for 15 days, especially in the South. Since then, Feb 16 has been known as Vibhavadi Day in Surat Thani.

Her death broke the heart of her husband, HSH Prince Piyarangsit, who penned a short story entitled Following Ratnavadi's Footsteps in 1978 in the form of a letter written by MC Dnaivadhana and addressed to Khun Ked, an old friend of his and his late wife MC Ratnavadi. "First, I have to apologise for impersonating other people again -- this time Prince Dnai. However, it should be all right since I was really good at disguising myself as Mr Lek last time, wasn't I? This time, I want to pose as Prince Dnai, but the elderly Dnai, because it was 30 years ago when he was on the trip with Princess Ratna. Time flies. The princess has gone while I still want to return to places where we went together. I do it though I know I must shed my tears. People may be right if they say I am lunatic."

Besides mourning for her, HSH Prince Piyarangsit set up the Vibhavadi Rangsit Foundation that same year in the Princess' memory to continue her projects. The foundation's activities are limited to the South, where the Princess was most active during her lifetime.

From July 6-9, the foundation will host an exhibition at Siam Paragon on the 40th anniversary of the Princess' death, to enable a new generation to learn about her life, achievements and the sacrifices she made for the country.

"We hope it will attract the attention of the public and young people," said MR Priyanandana, who is also the foundation chairperson, "who will come to learn about my mother's life and know who inspired the name of Vibhavadi Rangsit Road."