The Islamic holy month of Ramadan is a time for spiritual reflection, self-improvement and family gathering, unless you're a refugee or asylum seeker, cast adrift into a land far away from home and family.

Several mosques in Bangkok welcome these foreigners at iftah, or the fast-breaking meal at sundown. At Satthachon Foundation for Education and Orphans for instance, a number of African Muslims are regular guests, where they find food and friendship amid Thai Muslims. Ramadan for them is also a time to come to terms with their uncertain future and ambivalent status, in addition to building up their faith to face life's disappointments as they unfold.

Congo-born Lukungu Woso, 29, who spent most of his life in Sudan, is an economic refugee. Having resided in Thailand for nearly four years, he is still awaiting refugee status, and thus is considered an asylum seeker. 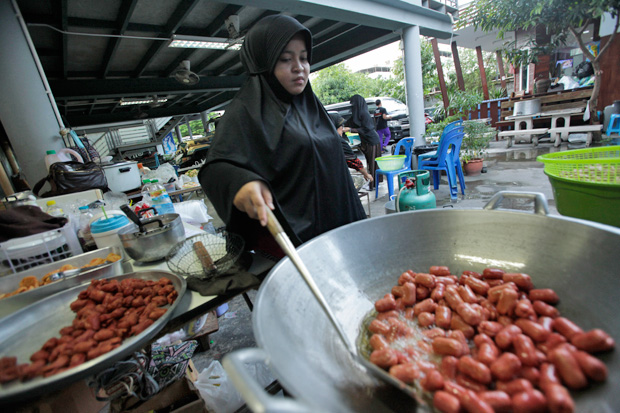 "It has been really difficult celebrating Ramadan in Thailand because my wife and I are far away from home," said Woso. "When I was in my country, we used to visit family and friends after breaking our fast in the evening, but here, because we don't know many people, we usually stay at home after attending the mosque or visiting Satthachon Foundation. Fear of immigration police catching us is always a looming problem."

Being a refugee in Thailand is to live with grey status. Even though their status is official, they can still run into trouble with police.

There have also been a few struggles in terms of food, he said. The type of sour yoghurt and kissra, a special type of bread made of durra or corn, are next to impossible to find in Bangkok, which makes him miss home even more during the fasting month when Muslims refrain from eating from sunrise to sunset. Some of their favourite dishes are impossible to prepare because the imported ingredients are too expensive. 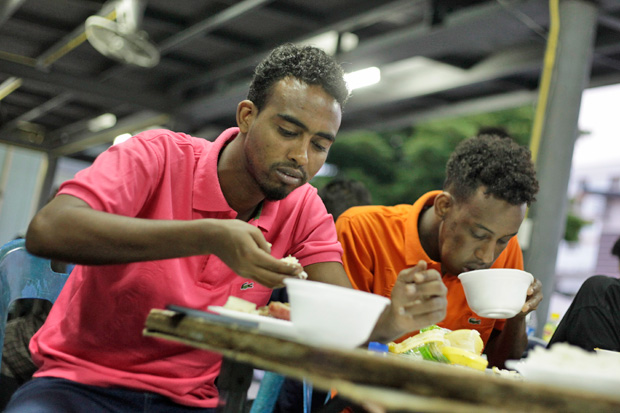 Woso said despite his personal struggles he is using this time during Ramadan to get closer to God. "As it's the holy month, I spend most of my days reading the Koran. This has helped me come to terms with the uncertainty of my life. I have become spiritually stronger."

Khusee Ismael also came to Satthachon Foundation to break his fast. The Ethiopian sought asylum in Thailand eight months ago after fleeing his country due to ethnic clashes. His interview for refugee status will be held in 2019.

The 32-year-old ethnic Oromo is no stranger to Thailand. In 2014, he imported garments and textiles from Thailand to Ethiopia. Last year, a state crackdown silenced the Oromo people. Human Rights Watch reported that since November 2015, over 400 Oromo people are estimated to have been killed, thousands injured, tens of thousands arrested, and hundreds more have been victims of enforced disappearances.

"It feels strange to celebrate Ramadan as a refugee after knowing what it is to have everything," said Ismael. "As I am single, I really miss my loved ones back home, especially during the fasting month because it is so much to do with connecting with the people near and dear to you. I am thankful to have the support of both the people at the mosque and Satthachon Foundation who are family to me."

Several kinds of food prepared during Ramadan in Ethiopia are similar to Arab dishes, he said. Families would attend evening prayers after which they return home to break their fast with a sumptuous meal cooked by the women of the house.

Faith shores up people's lives, especially when the chips are down. Being forced to leave one's country in order to escape war and persecution, even strong individuals can spiral down the abyss of worry and fear. To Ismael, praying and fasting has helped him come to terms with the fact that his future doesn't lie in his hands.

"I am still getting used to Thai Muslim culture," he said. "While I am very appreciative of the support I have received from my Muslim brothers and sisters here, our cultures are very different. The adjustment period is time consuming."

He has noticed that when he prays and fasts, he cannot totally detach himself from his immediate earthly concerns as he could in his home country. The serenity that Ramadan normally provides has been replaced by constant turbulence.

"It is a reality that some of my fellow refugee brothers wouldn't like to owe up to, but it is true. Having said that, worry will not take me anywhere, so during the holy month, I choose to give my concerns to Allah who knows better."

Omar Ahmed, 26, who worked as an English interpreter for the UN in Somalia, had a similar story to tell. In Thailand for over two years, he has become accustomed to spending Ramadan with Thai Muslims. A political refugee, he is here with seven family members. He hopes to resettle in Canada.

"Most residents of Somalia are Muslims, so Ramadan is celebrated with a lot of fervour," remarked Ahmed. "Our focus is largely on prayer and food. We can pray seven to eight times a day and after breaking fast, we usually eat three-to-four times at night. The atmosphere is electric because all our neighbours are Muslims.

"This is probably what I miss most now that I am here," he said.

Ahmed's prayers don't only centre on redirecting his heart away from worldly activities. He says he also sends prayers to the innocent people who have been killed in terrorist attacks carried out by Muslim radicals around the world.

"My heart cries for the victims of such terrorist attacks, I want to tell the world that this is not what Islam teaches. The people that carry out such vicious attacks are brainwashed and are not real Muslims."