From cricket pasta and scorpion vodka to crispy silkworms, edible insects now come with a twist

In the face of impending food scarcity, edible insects are a newfangled protein alternative. Modern food science and technology allows culinary creativity for bug-eating beyond what one can imagine. From the creepy crawly that may not seem appetising, today we have chocolate-coated crickets, scorpion vodka, crispy silkworms and cricket snacks in myriad flavours ranging from seaweed to barbecue to cheese.

These products are increasingly crawling up the shelves.

To create better understanding of eating insects for food security, the Asean Food and Feed Insects' Association (AFFIA) recently hosted a public seminar entitled "Insect Industry in Asean: Insights With AFFIA" at Kasetsart University. The event brought together representatives from various sectors who shed light on the prospect of insect-based food -- a growing industry and a sustainable as well as nutritional diet.

"You get quite a lot of protein from insects. Especially from crickets," said Pisit Dhamvithee, a professor at the Faculty of Agro-Industry, Kasetsart University, referring to a diagram illustrating the nutrient percentage of a grasshopper which contains 72% protein, 16% fat and 12% carbohydrates in comparison with a cow, which contains only 52% protein and 48% fat.

Another United Nations chart pinpoints that the edible percentage of a whole cricket is 80%, while we only get as much 55% and 40%, respectively, out of pigs and cattle.

"The data shows us an equally important point about a bug-based diet, other than being a rich protein source. It helps sustain the agricultural system," added the professor.

Now on to our primary concerns when it comes to an insect-based diet. We've now grasped the idea that they are perfectly edible. But what about the somewhat spine-tingling sight of them, let alone the taste, for those new to entomophagy?

Today, creepy crawly grub has kicked it up a notch and hit the shelves with cricket pasta, insect protein bars, cricket-infused cookies, even flour and tortilla chips made from bugs, but give off not a single hint that they are made from the tiny critters. 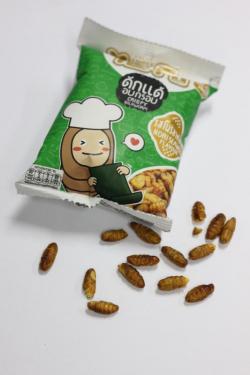 The tiny beasties have also started hopping up to the upscale culinary market, as AFFIA, along with Le Cordon Bleu Dusit Culinary School, organised a seminar on entomophagy last October. Highlighting the event were several bug dishes, including bamboo-worm chocolate mousse, cricket variation and savoury crispy cricket with watermelon.

Despite the gratifying attributes these possess, our little friends aren't gliding on a rose-paved path straight to supermarket shelves. In certain parts of the world, the bug taboo still exists.

"The preconception is because, for centuries, especially in the West, we've considered insects as pests. So even if you've never tried them, you think they're going to taste bad," explained Massimo Reverberi, owner of Bugsolutely cricket pasta. Founded in Bangkok in 2015, Bugsolutely is one example of an attempt to incorporate insects smoothly into food ingredients. The company focuses on developing and exporting foods made from edible insect flours. Crickets are among the most-preferred bugs, partly because they're always portrayed as good guys in fairy tales, whereas worms are more often than not associated with soil.

For Westerners, entomophagy is a recent concept, its products often labelled as superfood.

"They want to try new things. They want to explore. It also happened because some foreigners visit Khao San Road and like the street food, which includes insects. They go back to the US and say, 'Um, this might be a good idea'. It started in a very basic way, as Holloween-style gifts or jokes or even aphrodisiacs," Massimo added.

In Thailand, as well as many other Southeast Asian countries, bug-eating has been a farmers' favourite for centuries, but the contemporary challenge is to nudge the barely keen middle and upper classes to give the new craze a shot.

Apropos agricultural sustainability, Cricket One, a cricket-based food-production company in Vietnam, is another pioneering example. According to Bicky Nguyen, the enterprise's co-founder, edible crickets can be reared on the stem and leaves of cassava -- parts of the widely grown plants by small farmers that otherwise will go to waste.

"The practice is that after they sell it to fuelling companies to produce ethanol, they collect stems for the next season. The rest they leave in the field, then dry it and burn it. In doing that, they release a lot of CO2 into the air," said Nguyen.

The cassava farmers partnering with the company are provided abandoned shipping containers -- refurnished with automatic climate-control systems to house and breed the crickets.

After the harvest, the by-products, including cricket oil, may be used for cosmetics and in pharmaceuticals, leaving behind barely any bio-waste.

"At one point, it's good for the consumers, too," she said. "The human population keeps increasing, but the land is not expanding. We do not have enough land to live on, never mind for farming animals."

Even if edible insects can't leap right into the mainstream, increasing curiosity among consumers is indicating a green light, given that the products come in packaging that allows the crunchy crawlies a chance to introduce themselves in a different light.