Come on Baby, Light My Fire

On the 50th anniversary of the Summer of Love, Jim Morrison biographer Jerry Hopkins reminisces about the Swinging 60s, his love of ladyboys and life in neon-lit Bangkok

After 24 years in Bangkok there's no hoodwinking Jerry Hopkins, pioneering Rolling Stone reporter and author of No One Here Gets Out Alive, the cult biography of The Doors' self-styled shaman-poet Jim Morrison.

The American, who delivers a rich montage of anecdotes about the "Lizard King", life in Los Angeles, Thai ladyboys and stupid white men, is scathing in his dismissal of plastic expats who try to reinvent themselves in Asia.

"You'd be surprised by how many ex-CIA spooks there are running around -- who aren't ex-CIA spooks," says the 81-year-old from his apartment on lower Sukhumvit Road, which could be a second-hand bookstore in disguise.

The doors are open, fittingly, and the mosquitoes are out for blood. Mine.

"It became something of a fad in the 1980s and 1990s. A lot of expats come here to escape something -- a jail sentence, bad marriage, bankruptcy, bad debt, the death of a relative, some traumatic event, big or small," he says.

Yesterday marked the 50th anniversary of Light My Fire jumping to No.1 on the US Billboard Hot 100 on July 29, 1967. It was a game changer for Venice Beach band The Doors and became "the summer anthem of the Summer of Love", according to Hopkins.

It turned an underground, blues-infused rock band into one of the biggest acts in America overnight. So big the city council of LA decided this year to officially designate Jan 4 the 'Day of The Doors' -- testament to their enduring appeal. Even The Beatles never got that.

"Jim Morrison took me to my first topless bar in 1969," recalls Hopkins wistfully. "And now I live in a red-light district. If I took Jim to Nana, he would be in his element."

Instead of Hotel California he lives next to Hotel Hopeland and Nana Plaza -- adult playground extraordinaire. Drawn to the exotic and bizarre, he eats bamboo worms and ranks as a living legend himself at Cascade, a tranny go-go bar with a Flintstones exterior.

He says he moved here at age 58 because he "had time for one more adventure".

The first (and best) biographer of the hard-drinking, Dionysus-haired Morrison, whose androgynous sexuality and haunting lyrics came to define The Doors, is wearing a faded Hawaiian shirt when we meet (he also lived in Honolulu with a transgender named Vanessa).

In Bangkok he has rubbed shoulders with real ex-CIA spooks, hit the bars with Led Zeppelin's Jimmy Page on the latter's birthday, had heart surgery and been declared clinically dead.

His 37 books ricochet from subject to subject: Jimi Hendrix, David Bowie, Raquel Welch, the Hawaiian hula, the Hmong, the history of the condom. He's even written an article on the late king's talent as a music composer. He calls Thailand Confidential, a collection of essays, "my love letter to Thailand".

Over the course of a five-hour, Pepsi-fuelled interview we touch on flower power, running the first "head shop" in LA, 20 years with Rolling Stone (he joined on issue No.5), how music today sucks (him not me), spending Carnival in Rio with Welch, introducing Groucho Marx to comedian Lenny Bruce, why ladyboys are more interesting than rock stars, and a quarter of a century in the City of Angels.

He sates his philanthropic desires at the Klong Toey slum -- Bangkok's largest -- and tends a farm in Surin with his Thai-Khmer wife. Well, he used to. Now he needs a wheelchair to get around, is hard of hearing and has just 13 teeth left.

"I still go to the farm, where Lamyai pushes my chair from the house to where we shelter the ducks, chicken and cattle," he says.

It has two fish ponds, 12 kinds of fruit and is self-sustaining, not for profit. He tied the knot with his fourth wife at a chapel in the slum run by his close friend, Father Joe Maier.

But I was hungry for more wild escapades with Morrison, that mystical figure at the heart of NOHGOA. The book practically launched a new publishing genre after it became the first rock biography to rank as a New York Times No.1 bestseller. It has sold over four million copies and remains in print, available at Bangkok stores.

"Morrison created this monster -- the Lizard King -- that he grew to hate," says Hopkins.

"That's why he got fat, started wearing sunglasses all the time, had the face-hiding beard, and finally moved to France to become an expat.

"As [co-author] Danny Sugerman put it, 'The Beatles were all sunshine, The Doors were all dread.' They were threatening to your way of thinking. But their themes were universal -- parents and governments -- they were revolutionaries.

"The Doors had something to say. That's why I wrote the biography, because I didn't think his songs and lyrics were being properly credited for the influence they had.

"At the time, people used to ask me, 'Why do you want to write about him?' I don't think I would hear that today."

"I know you want to talk about Morrison but I haven't written about rock bands in 25 years," he says irritably. "Now we're talking Bangkok. The Doors weren't big here. My wife doesn't even know who Elvis is. Why don't you write a story about ladyboys?"

Because it is 50 years since Light My Fire, I tell him. This is a homage. Later, Hopkins tells me producer Paul Rothchild deserves credit for some of their success by taking a razor blade to the original version and cutting out a five-minute musical bridge.

"That song smacked of Jim Morrison because it had an ugly, mean twist in the lyric 'Our love becomes a funeral pyre'," Hopkins says.

It stuck at No.1 for three weeks. The following summer, blind Puerto Rican singer Jose Feliciano released a slower, Latin-styled cover that shot to No.3 in the US charts and earned him a Grammy. Nice piggybacking.

But it was guitarist Robbie Krieger -- "The Doors' secret weapon", according to keyboard bass player Ray Manzarek -- who penned the original hit. The rest of the band chipped in extra lyrics (Morrison), rhythm (Densmore) and that famous organ intro (Manzarek).

Over the course of an evening's jam session it evolved into the song that would make history by turning The Doors into a household name.

"Jim became the James Dean of music," says Hopkins. "He became the icon of that time. His only real competitor, and I don't want to think of him that way, was Mick Jagger."

The band still sell a million albums a year -- at least until the advent of free torrents.

Riders on the Storm, their psychedelic rock classic, has been covered by musicians as varied as Santana and Snoop Dogg. Another track, The End, syncs with choppers napalming Vietnam in Coppola's Apocalypse Now.

Oliver Stone rekindled the fire in 1991 with the aid of Val Kilmer and a commendable, shaman-infused biopic called, funnily enough, The Doors. It sent NOHGOA back up to No.2 on the NYT chart. Hopkins says 40% of the movie is fiction.

"The club Jim took me to was next to The Doors' office in LA. As soon as we walked in, Love Me Two Times started playing on the jukebox and two girls sat on our laps," he says.

"Jim drank whisky and Coors -- voluminously. He always drank Coors. He only ate American food. He wouldn't buy a foreign-made car. All those cars he crashed into lampposts were Fords and Chevrolets. People don't realise he was still very much the son of an admiral."

"Other bands got rich and bought mansions. Jim lived in a crummy hotel."

The band's catalogue of songs came to symbolise the spirit of the age: sex, drugs and rock 'n' roll, protests, free love, the anti-war movement and the fight for civil rights -- issues Thailand is still grappling with today.

Born to Quakers, Hopkins earned a graduate degree from Columbia and later penned the first biography of Presley -- at Morrison's prompting. He also ran a "psychedelic store" and spent five years as an LA correspondent for Rolling Stone, followed by another year in London.

Before writing the biography that would become a cult classic, he dismissed Morrison as "pretentious" after watching him dive into a crowd one night. Hopkins' review of the concert was his ticket to joining the magazine staff.

He says NOHGOA nearly died a cot death. After seven years and 30 rejections, he was ready to call time on the project when a young Sugerman, the band's secretary-cum-publicist, scored a deal with "blind luck" by landing it on the desk of a Doors fan at Warner Books. In reward he got co-authorship and royalties.

"Without him, no book," says Hopkins.

His colourful resume includes stints in Hollywood, where he worked as a writer-producer in television for Mike Wallace, Steve Allen and Mort Sahl, as well as for ABC Television and Universal Studios.

The original version, Strange Foods, featured a photo of a skinned cow's head and a recipe for penis soup. It was later gentrified, with the pictures toned down, 16 chapters added -- including one on road kill -- and repackaged as Extreme Cuisine.

"I did his first show, A Cook's Tour, in which he called Strange Foods his Fodor's guide to the world," Hopkins recalls. "I then did his second Bangkok show, No Reservations."

So what does the octogenarian think of Bangkok's recent ban on street food? It's sheer folly, he says, part of "a misguided attempt to turn Thailand into Singapore".

Next to his bed all 11 books focus on transgender people and bisexuality, testament to years of research into a book on the Thai flesh trade that never materialised.

"Focus on the ladyboys," he exhorts, the words exploding like a burst vein. "There's a direct line from Morrison's topless bar to the bars at Nana Plaza.

"Many of those bands in the sixties claimed they wanted to change the world. Ladyboys have a bigger challenge. They're more courageous than any rock star I've ever met.

"Bangkok -- or Asia -- draws Westerners who want to reinvent themselves, like Conrad's Lord Jim or Kipling's The Man Who Would Be King.

"Ladyboys completely reinvent themselves. They're miracle workers. They've taken everything God didn't give them and turned it into a piece of art, using their own bodies as the canvas, or unshaped marble."

I ask for more Pepsi. His hearing aid is turning our chat into a parody of Agent Cooper shouting at FBI director Gordon Cole, and I'm hoarse. He reminisces about watching sex reassignment surgery.

"I'd say I know as much about ladyboys as anyone in this town, except for maybe the doctors who perform the surgery."

Laughing off Thailand's reputation as a white man's graveyard, he seems fairly Zen about life these days.

"Thailand is a place where there are lines drawn everywhere, and you don't know where they are until you cross one," he says.

"You're never going to understand it."

At that point the heavens erupt and I leave him leafing through faded photos of past friends, including cosmetically enhanced Thai men, his head buried in a stack of worn albums.

In the final reckoning, rock gods were a younger man's fantasy. These days it's Bangkok that lights his fire. After all, he beat the odds. He got out alive. 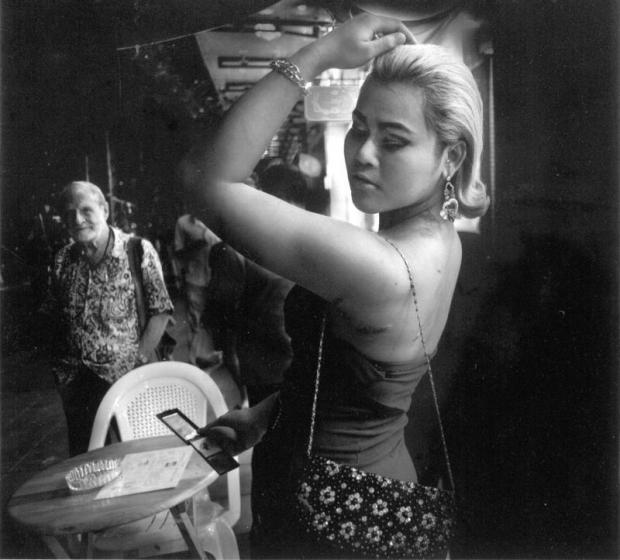 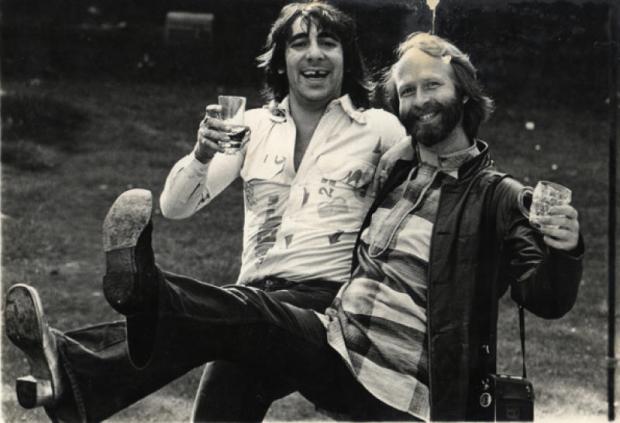 PARTY ANIMALS: Jerry Hopkins with The Who drummer Keith Moon at Moon's home in London in the summer of 1972. PHOTO: ROLLING STONE 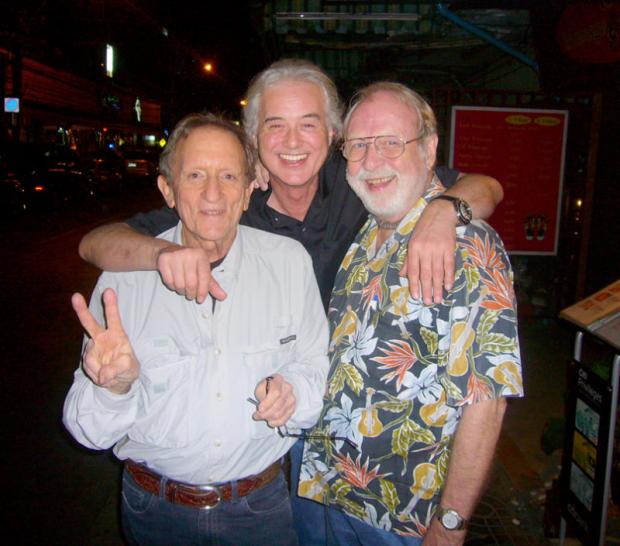