City plots to beautify its many unsightly manholes

published : 22 Sep 2019 at 06:01
newspaper section: News
writer: Anchalee Kongrut
clean sweep: Banks along city canals were cleared in 2017 under a government plan to turn Bangkok into the 'Venice of the East'.

Bangkok's streets are known for their potholes, uneven pavements and, especially recently, unsightly manholes that are posing an increasing safety risk for pedestrians.

According to the Bangkok Metropolitan Administration, in 2017 alone there were 750 complaints of accidents related to manholes.

However, a new manhole design project by a team of lecturers and art students at Silpakorn University offers hope that the city's administration is working towards a solution to the problem.

The team is overseeing the installation of four new manholes along the Khlong Ong Ang Canal walking street in Bangkok's old town next month, says Somchai Dechakorn, director of Urban Planning & Development under the BMA.

The implementation of a new design for manholes is part of the BMA's plan to redevelopment landscape of Khlong Ong Ang Canal.

In 2016, the BMA evicted vendors and their stalls from the "Saphan Lek" market along the canal. 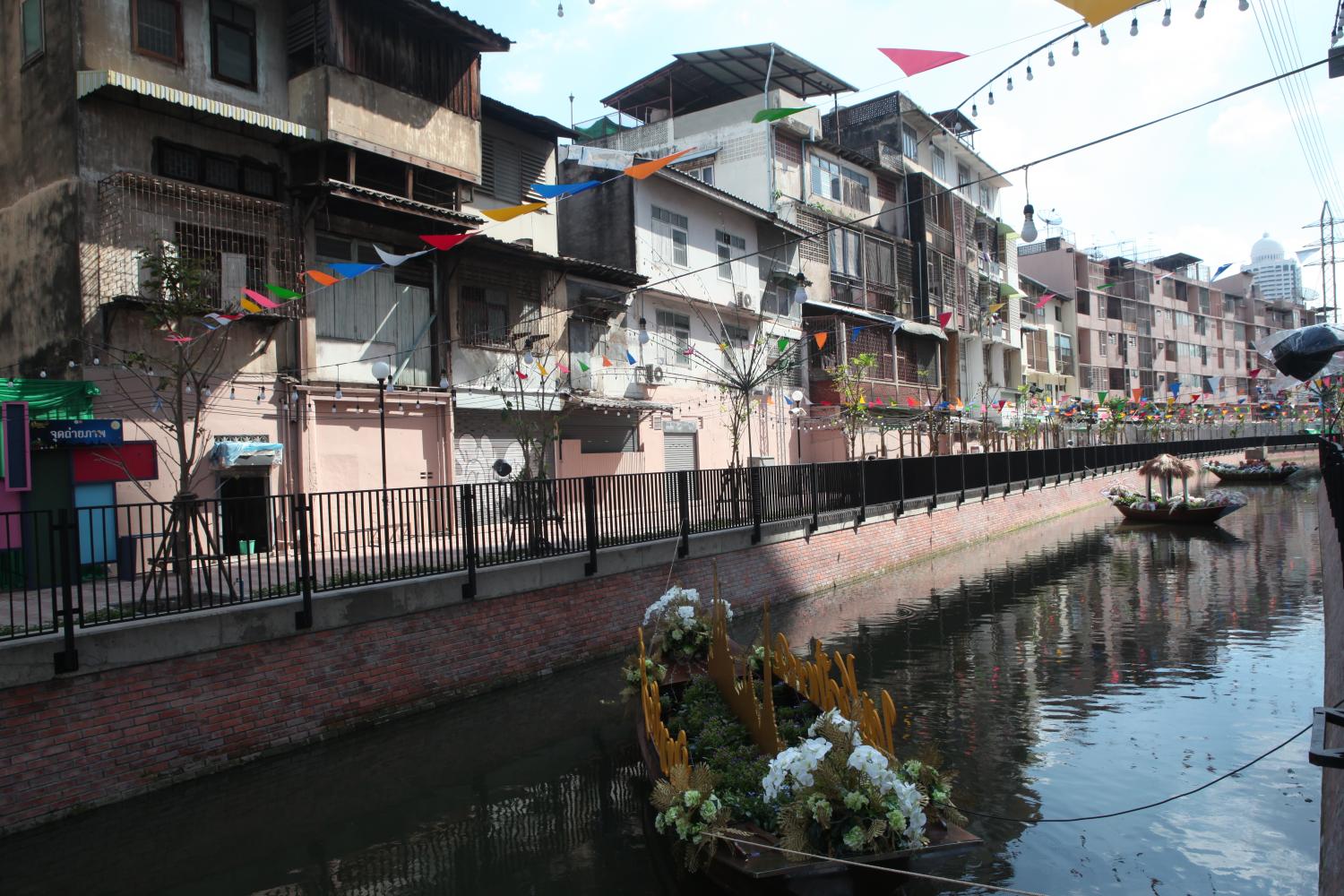 The eviction and landscape makeover were part of a joint government and BMA bid to develop five canals in Bangkok with a combined length of 15km for tourism and recreational use.

Of the selected canals, two are on the Phra Nakhon side of Bangkok with a combined length of 3.45km. They are Khlong Bang Lamphu and Khlong Ong Ang.

It is not the first time the city has engaged in street art projects. Indeed, two decades ago, the BMA invested in street art on a grand scale, having had sculptures rendered by artists placed on major streets.

However, the outcome was not encouraging after some sculptures were stolen and many others ignored.

However, Mr Somchai said the manhole project for Khlong Ong Ang will be more relevant to city residents. 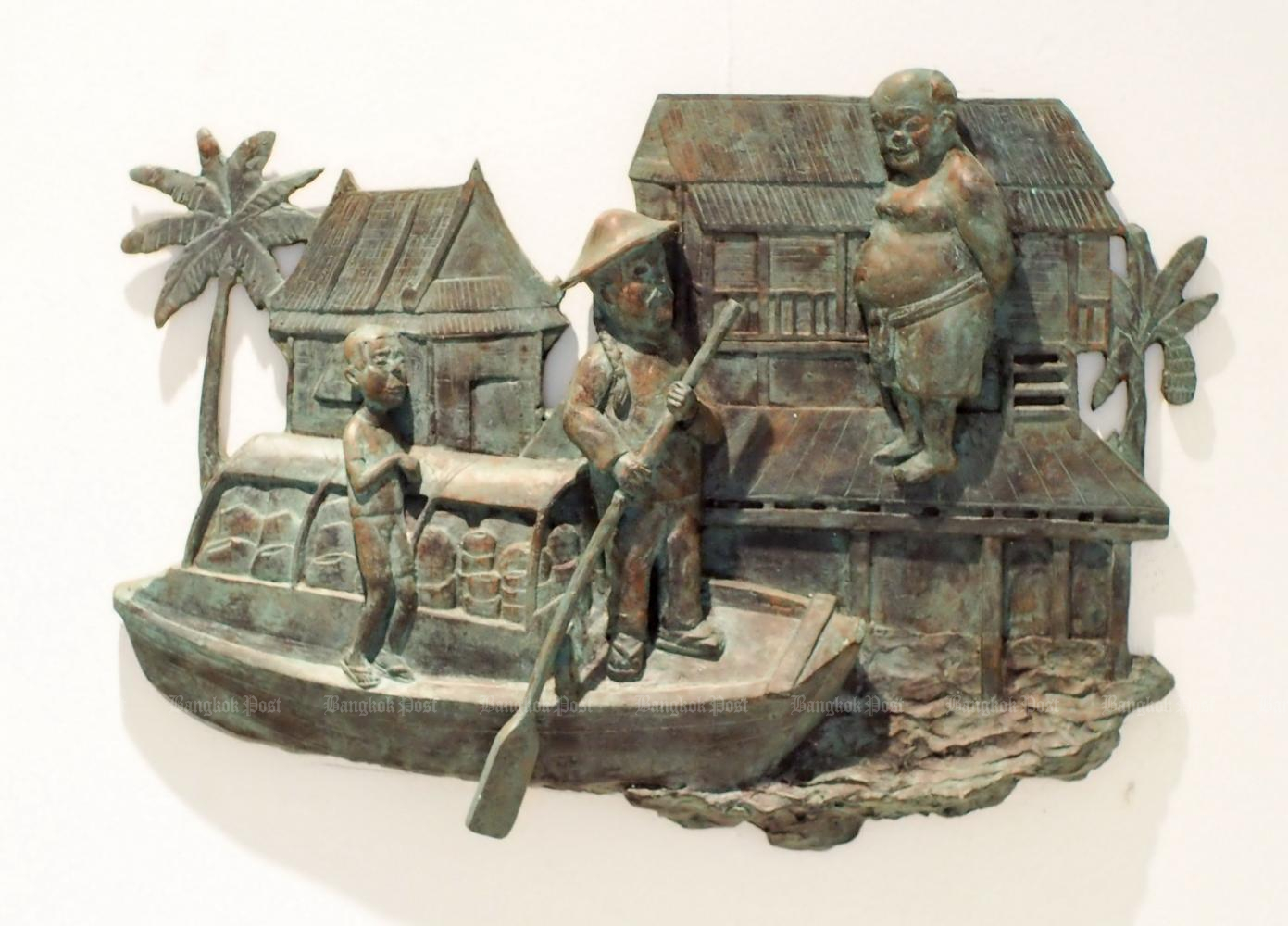 "We are not just putting new manholes on the street. It follows a plan to learn about the needs of local communities. The team from Silpakorn University which has designed the manholes conducted a study to learn about local history and seek residents' input," he said.

According to Mr Somchai, public reaction to online pictures of the proposed new designs has been encouraging.

The BMA is also considering a plan to place sculptures and new decorative fixtures on the famous Yaowarat Road.

The design for the new manholes came from a research team from Silpakorn University in 2015. The project, funded by the Thailand Science Research & Innovation (TSRI), studied civic arts for Bangkok streets and communities. 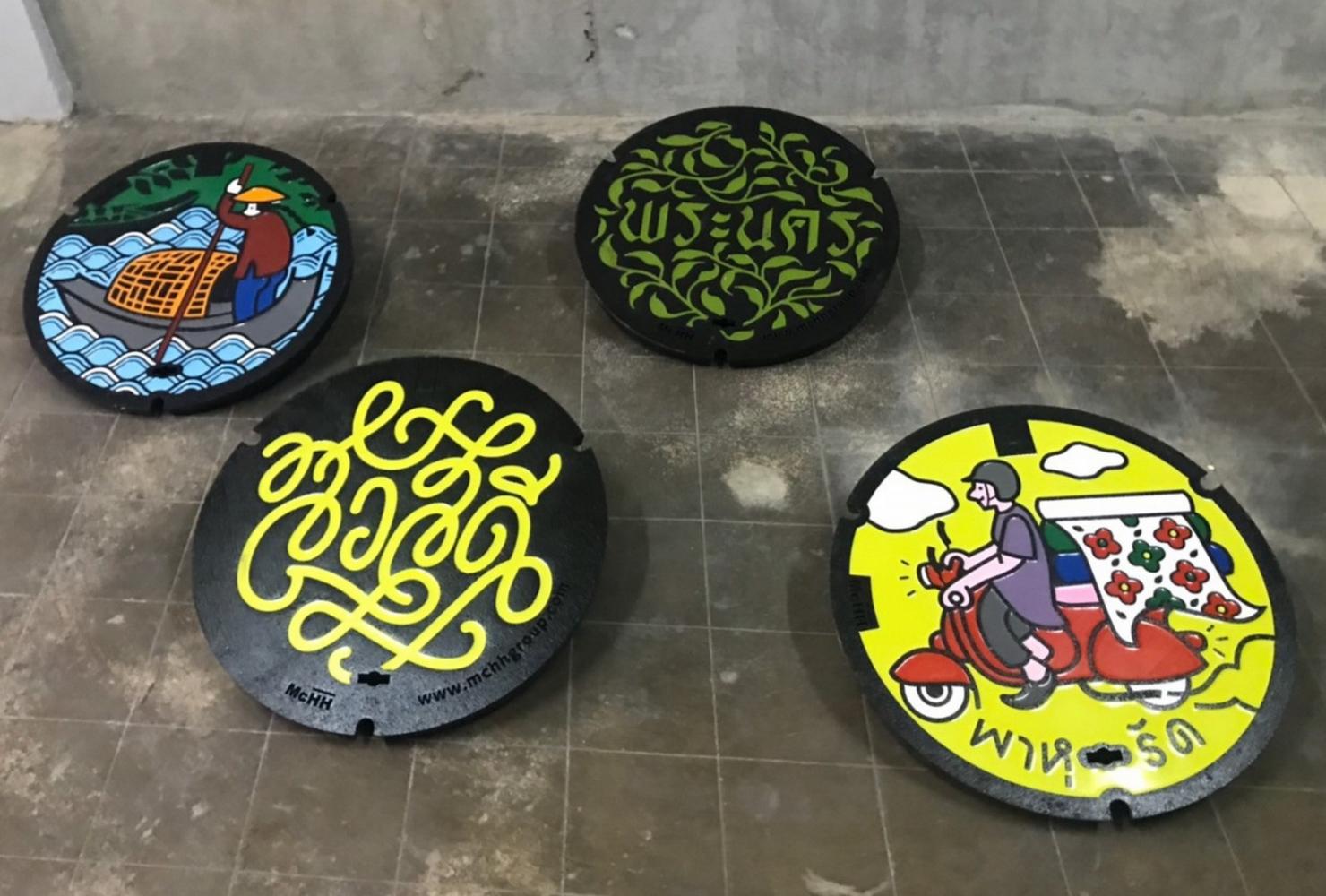 Four manholes designed and created by research team at Silpakorn University will be installed at walking street along Khlong Ong Ang Canal in the upcoming October.

"The research is not led by the need to design or create art objects. Our research focuses on civic art and local people's participation. We wanted to find out whether the voices of real people in local communities can still be heard under a top-down system of governance," according to Assoc Prof Jakapan Vilasineekul, a lecturer at the Faculty of Painting, Sculpture & Graphic Arts at Silpakorn University.

The university team chose Khlong Ong Ang Canal for their study as the area was going through a major transformation. Trade vendors were being evicted and the BMA had begun redevelopment of the area to create a new walking street.

The atmosphere between local people and BMA was acrimonious and the research team wanted to see whether an increased level of involvement in the process could ease tensions.

The team studied the history of the community to come up with their new designs which feature colours which are enamelled in Japan.

The manholes come in four versions. The first one showed a trader rowing a boat in canal and another showing an image of a man riding a scooter.

The first two designs feature details from the history of the canal.

One shows a man rowing a boat loaded with pottery to sell at the market where, almost a century ago, Chinese vendors from Ratchaburi province first began selling their wares.

Another shows a man riding a scooter to deliver textiles along bustling Phahurat Road, a renowned textile market run by the Indian community.

The other two show calligraphic writing, one featuring "Sawasdee" which means "hello" and other embossed with "Phra Nakhon", the name of the district.

The team also created a mock-up sculpture of two palms to reflect the cultural influence of the Chinese and Indian communities living in the area.

Assoc Prof Jakapan said the team has also begun the process of researching potential designs for street decorations and fixtures for Yaowarat Road.

Nevertheless, at the moment these four fancy manholes are just a tiny drop in the swamp of unsightly manholes in Bangkok.

According to the BMA, there are 600,000 manholes on streets and small sois totalling 6,400 kilometres across the city.

The steel bar model costs around 5,000 baht to make while a simple round manhole is priced at 10,000 baht. 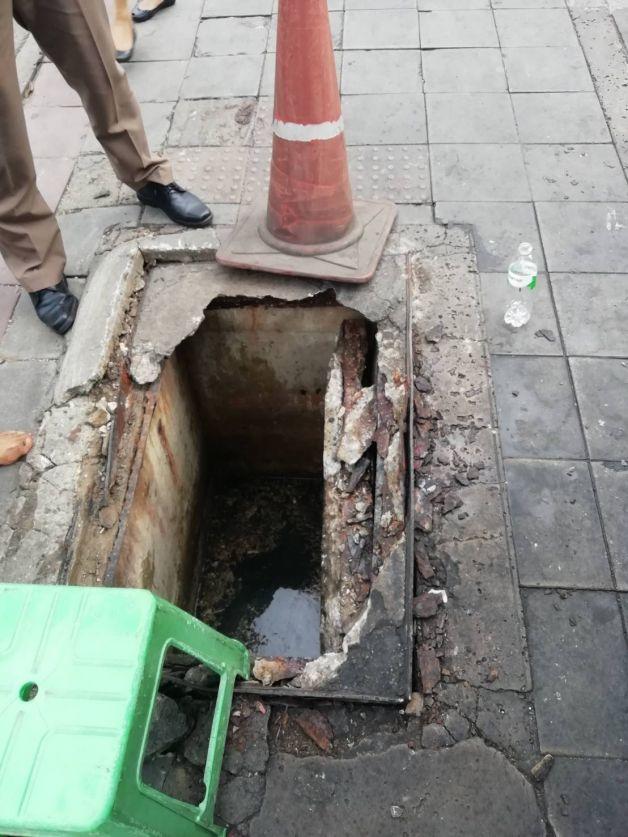 Danger ahead: A manhole in Huai Khwang district that a courier fell into in June this year. Bangkok Metropolitan Administration figures show 750 pedestrians were involved in manhole-related accidents in 2017.

Each manhole is expected to last 10 years, although most of them end up damaged far sooner due to trespassing by vendors, motorcycles, cars or construction activities.

In the case of accident or injury caused by defective manhole covers, victims are encouraged to file a complaint with the BMA, although the investigation and compensation process has been known to take as long as a year to complete.

These manholes will be more visible thanks to their unusual designs, which should help improve safety, observers say. 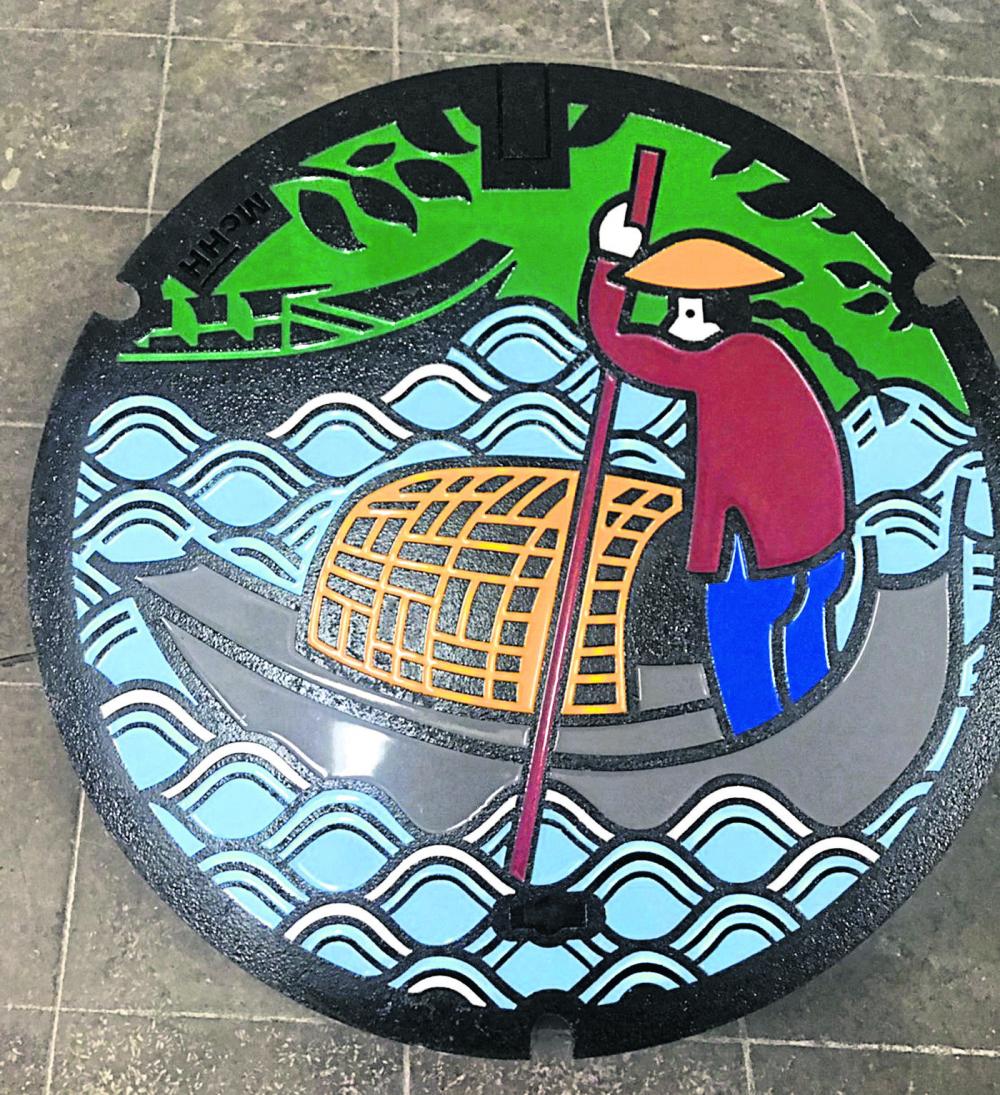 Far above  slice of history: One of the manholes to be placed on the walking street along Khlong Ong Ang Canal in the old town area of Bangkok. The cover shows the origin of the canal market where Chinese-Thai vendors came to trade. 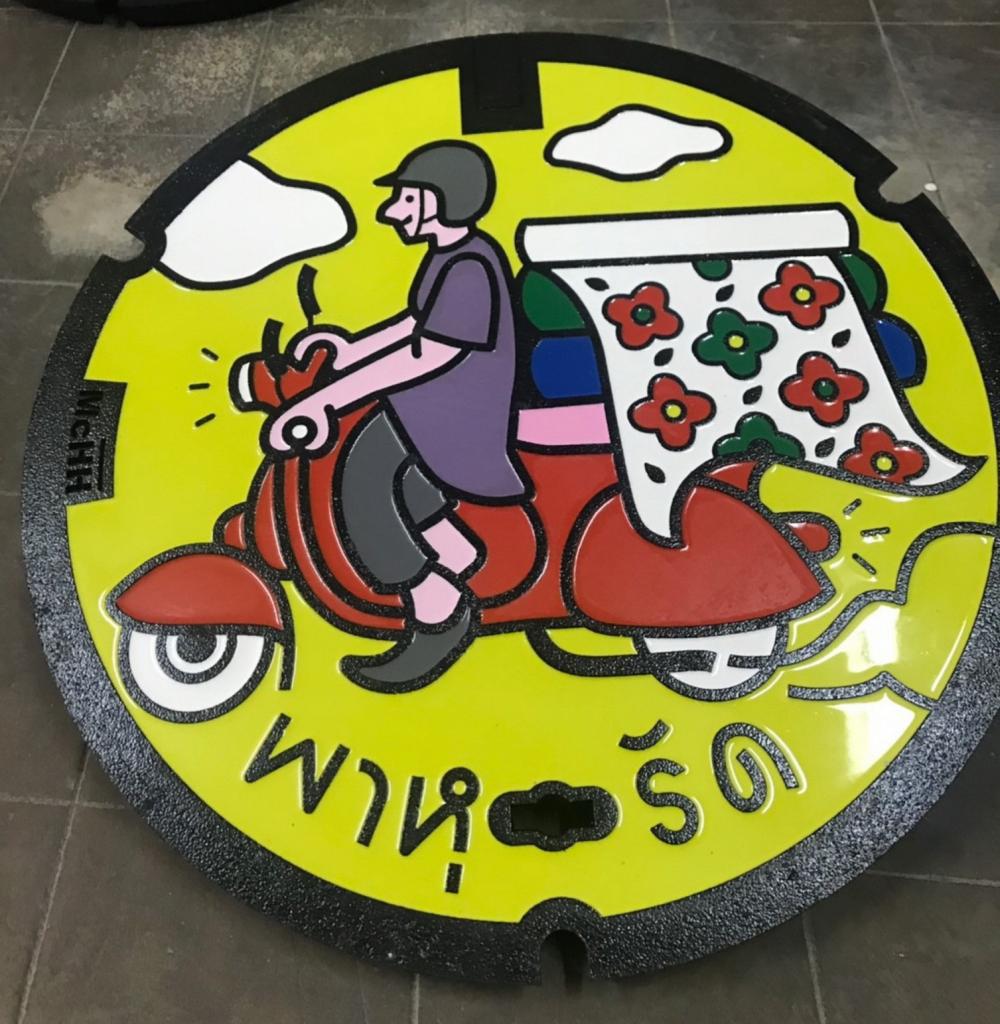 textile treatment: An image of a man riding a scooter shows how textiles can be delivered in bustling Phahurat, a renowned textile market in Bangkok. 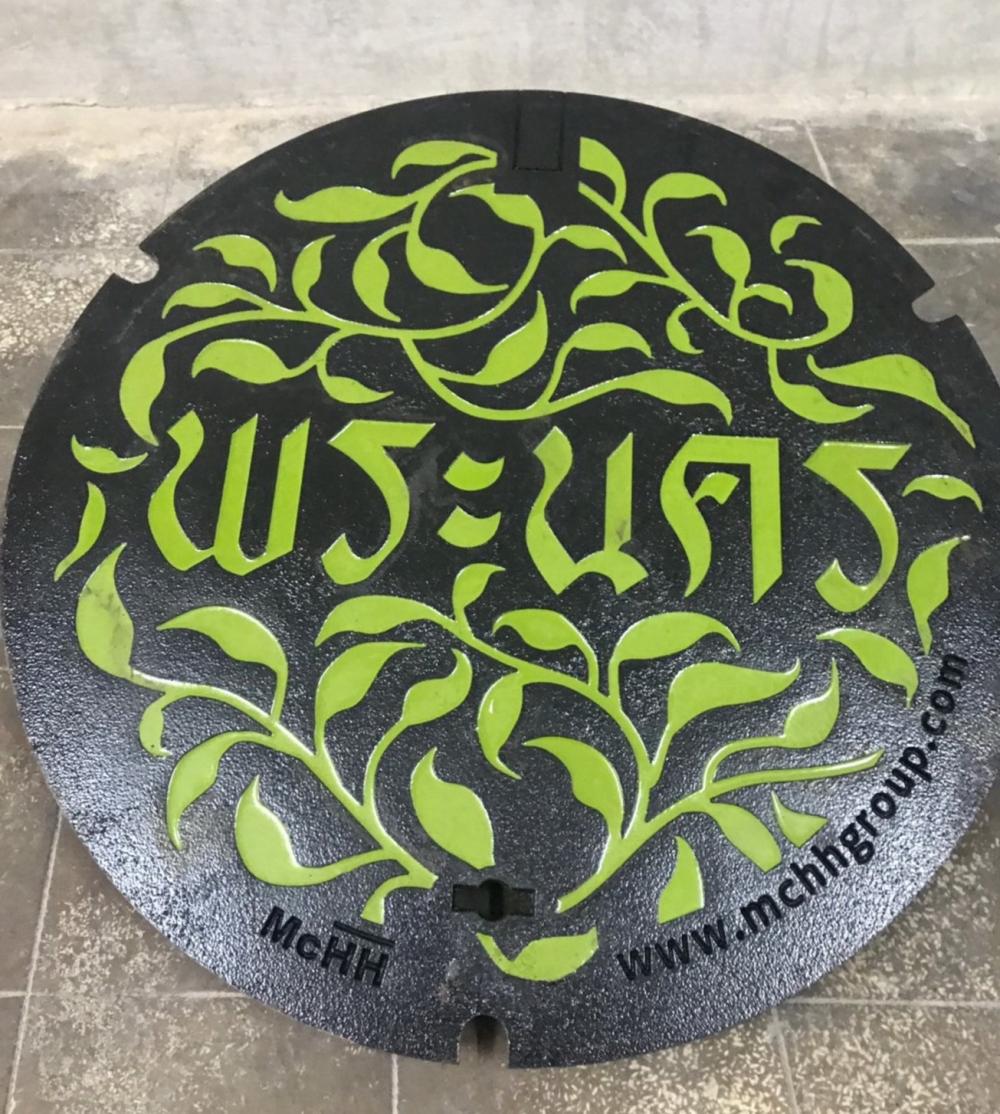 local pride: Font calligraphy on a manhole shows Phra Nakhon district, where part of the community around the Khlong Ong Ang Canal is located.