A crafty auntie who duped sympathetic Thais out of their hard-earned money by spinning a sob story about how a thief had made off with her belongings has fallen victim to her foul mouth rather than her duplicitious ways after poilice charged her with slander. Huay Kwang police on Friday nabbed Yupaporn Phanthang, 53, who admitted running a petty fraud racket in which she claims to have fallen victim to thieves while out shopping and asks for money to get home. She was forced to flee her rented apartment earlier in the week after netizens posted details of her fradulent ways on social media.

The campaign started when a city dance instructor posted details of her encounter with the woman, whom the media dubbed "Dangerous Aunty" and "Autocratic Aunty", at Bang Sue MRT station on Oct 6.

Atcharaphorn Bubpachat said the middle-aged woman clad entirely in black walked up to her claiming someone had stolen her phone. So began an elaborate role-play ritual which Ms Yupaporn has mounted on unsuspecting Thais for years.

Auntie Yupaporn claims a thief has slashed her bag and made off with her money and other belongings, leaving her with no way to get home. Commuters take pity on her and hand over money, in some cases hundreds of baht, at which she point she waits until another potential victim comes along and spins the same story again.

Media reports say she is known to station staff, who watch her as she makes her way from one victim to another. It is not known if they step in to chase her off but in one case they told a victim whom she conned out of money four years ago that she had been duped.

She is known to favour the Talad Rot Fai and Esplanade stations, though has also approached shoppers in department stores and has been spotted at bus stops, staggering along with armfuls of shopping bags, which she uses as props for her routine.

Victims who have come forward in the past week typically have given her 200 baht a time, though one victim in the Sukhumvit 23 area gave her a loan of 700 baht in February which she promised to pay back but didn't. One image in the media shows Ms Yupaporn clutching her shopping bags on a seemingly bare platform, pointed towards the elevator as if she is waiting for her next victim to appear.

Commuters who turn down her plea for money or dare call her out for her fraudulent ways are met with a barrage of verbal abuse, and it is her foul mouth rather than her thieving ways which landed her in trouble with the law. Huay Kwang police, who caught up with her on Friday, charged her with slander after a victim complained that she had abused them.

Speaking to police, Ms Yupaporn denied she had done anything wrong. It was her idea of happiness each day to see how much she could make from sympathetic Thais, who tend to be quick to help those in need. She told police she works as an insurance broker but has previously worked in corporate PR and studied at university.

She had been spinning her tale of woe for a couple of years, though complaints by netizens who realise they have been duped go back four years. Ms Yupaporn appears to surface every couple of years and when publicity about her exploits catches up with her, vanishes again. This time, when dance instructor Ms Atcharaphorn posted a straight-forward account of her encounter, other netizens came forward to reveal that in fact she had been duped. Police tracked down Ms Yupaporn's address to an apartment in the Lat Phrao area.

The apartment's manager, Malee, said Ms Yupaporn had been staying there for the past three years and had insisted on renting the place daily, which cost 500 baht, as that room has air-con, unlike ordinary rooms which charge just 3,000 baht a month.

"We have not seen her since Oct 13 when I confronted her about the news reports claiming she has been deceiving passengers at BTS and MRT stations," said Malee. Ms Yupaporn, she said, keeps to herself and appears to have few friends. She swears at everyone routinely, even local monks.

Malee let police into her room for a look, where they found expensive travel bags, her trademark shopping bags, a collection of 20 umbrellas (another prop), and plenty of outfits in black. Police, who invited the TV cameras in for a look, also found a notebook in which she had written out conversational phrases in English, no doubt for intended foreigner victims, and a bank book containing a balance of 180,000 baht.

One passenger who met Ms Yupaporn at Talad Rot Fai station on Oct 13 was wise to her sob story, recalling a previous round of publicity about her exploits four years ago. Miranda "Look Nam" Taree said she was heading home with her boyfriend when Ms Yupaporn approached. "I decided to go along with her story but urged her to lay a police complaint. She refused. However, I pressed the point and she tried to move away. That's when I told her I was on to her. I said I had seen warnings on social media about her con and added, 'You're not dining on my stupidity, making out as if your bag has been slashed...it's a bit of a corny old plot, auntie'.

"She swore at me and I tried to go after her but my boyfriend held me back in case she was working with someone who might come to her aid," Look Nam said.

Netizens have taken a dim view of her remarks to police. One, Monlada Thanapanich, wrote: "Auntie...the money which others give you out of compassion is hard-earned. But you take their money so easily, without any capital or labour. Don't you feel as if you have taken advantage of them? You can't say you have done no wrong because you're defrauding people."

Ms Yupaporn was taken to Phra Nakhon Nua district court yesterday which ordered to pay a 6,000 baht fine, halved after she confessed. She claimed to have no money so was jailed for six days instead. Police had earlier appealed to victims to come forward, but laid the slander charge on the basis of a single complaint they had received.

Model and actress Pitchanart "May" Sakhakorn says she is willing to take legal action against those spreading tales on the internet claiming she lured her new love, a luxury car importer, from his girlfriend to go after his money. 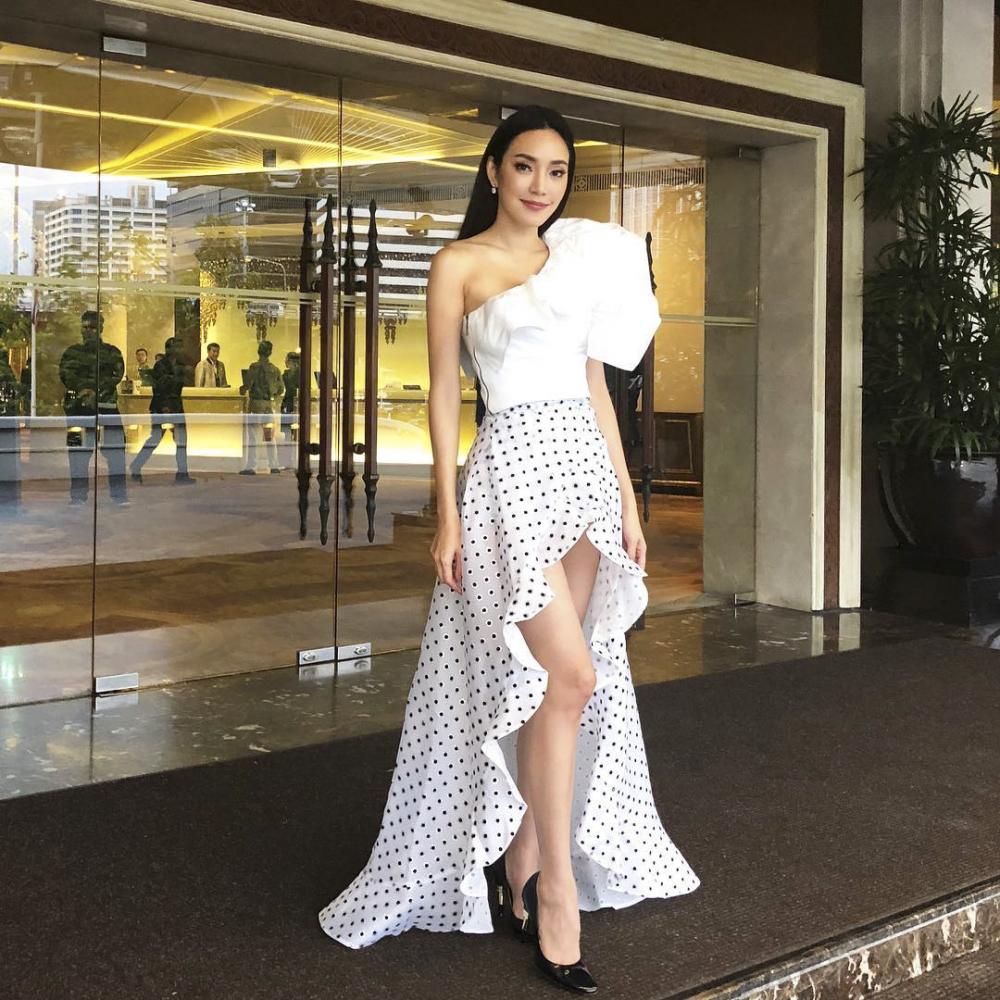 May and her new love, Akarawatt "Big" Kongsirikan last week declared they were an item, with the couple heralding their leap from the "friendship zone" with a clip in which Big asks May if they can start seeing each other. His message in English was beamed onto a large projection screen. They followed that up with a romantic trip to South Korea.

However, a former friend of Big's threatened to spoil their big moment when she claimed on social media that May had acted as a "third hand", wresting Big, head of the B Autohaus luxury vehicle importer, from his former love. May responded by threatening "Ohm Amm", as she calls herself, with legal action unless she took down her post. She later removed it.

May said she and Big had been close friends since they studied at ABC together a couple of years ago. They are so close they help screen each other's potential partners. "As a friend he was perfect, but now he is my boyfriend I feel a little awkward. We are having to get to know each other gradually." Big, she said, left his most recent girlfriend in March. She left her most recent love in May, as their lifestyles were too different. "So it's not possible I acted as a third hand," May said. According to Big, Ohm Amm had worked for a suit shop he used to run with a former girlfriend but had left the shop five years ago. Writing on Ohm Amm's account, Big said they had not kept in touch so she was in no position to know about his private life.

Net idol and former celebrity boxer Apirak "Sia Po" Arnon has no sooner launched a skincare product than finds fraudsters on the net are impersonating his name in the venture and siphoning off customer's money. 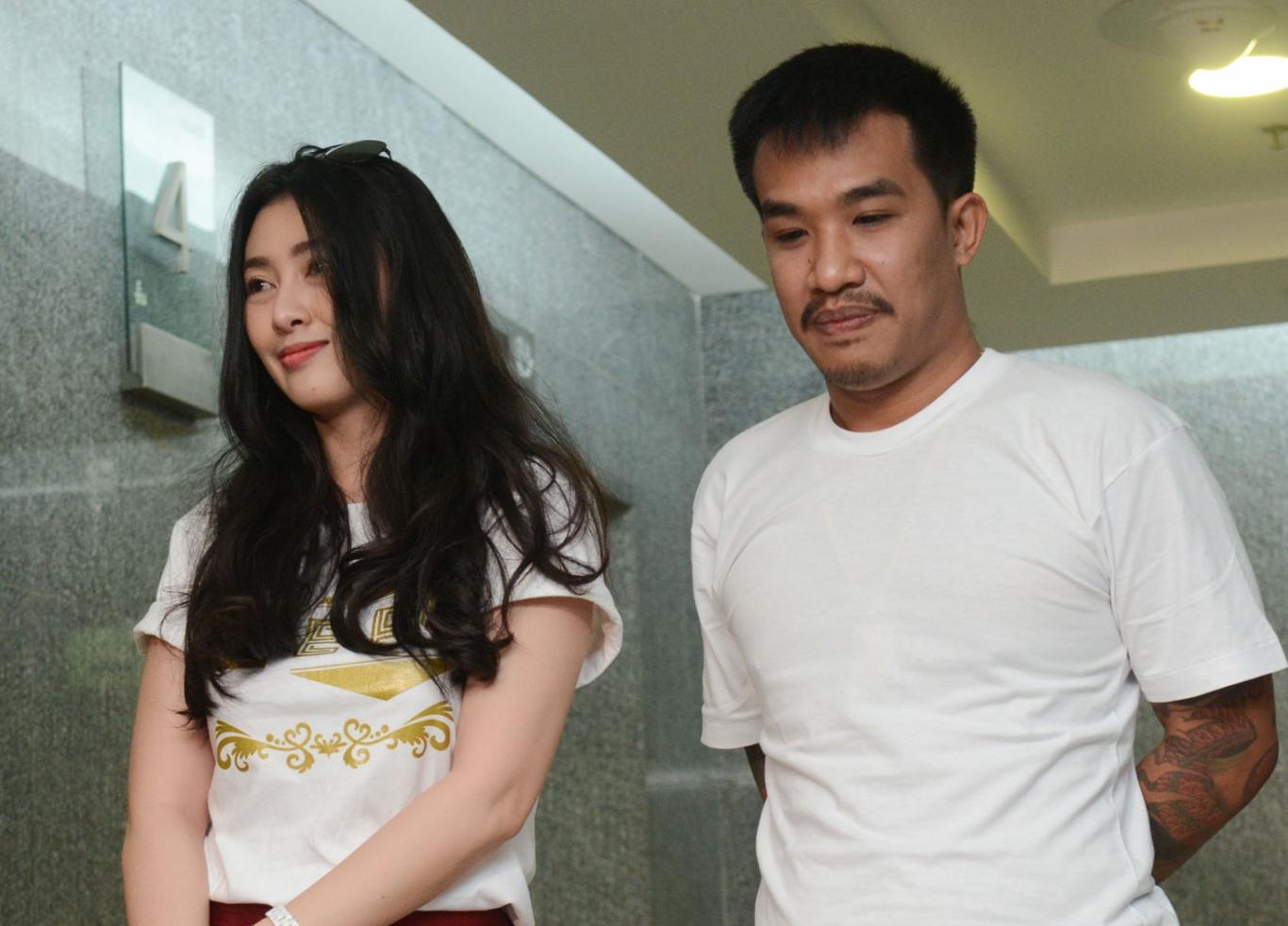 Sia Po, accompanied by model Apisaya "Eve" Pattanaworasap, presenter for his Zeee anti-ageing cream venture, last week laid a complaint with Technology Crime Suppression Division police. He said a rival had set up fake Facebook and Instagram accounts purporting to take online orders for his product. He said 11 customers had been deceived with total losses of about 10,000 baht.

Sia Po, who has come to prominence in recent weeks with huge donations to the Ubon Ratchathani flood relief effort, has offered 100,000 baht for information leading to the culprit's arrest.

Sia Po, his wife and Eve launched the cream at a glitzy function this month amid ructions between Sia Po and his estranged ex-love, rocker Sek Loso's former wife, Wiphakorn "Kan" Sukpimai, who lent him 60 million baht for a boxing and gambling venture last year and now wants it back.