Massive student-led protests calling on the general-turned-Prime Minister Prayut Chan-o-cha to quit and reform of the nations' monarchy have been making front-page news for a couple of months now. The unprecedented and boldest protests since Thailand's 2014 coup have come at a time the country is reeling from the financial impact of the Covid-19 pandemic.

So far we have seen students converge in droves across the country to call for systemic democratic reforms: the dissolution of parliament, an end to harassment of political opponents, amendments to the constitution, as well as curbs on the King's powers, obviously a long-standing taboo in Thailand where criticism of the monarchy is punishable by jail time.

Despite rally leaders facing charges, pro-democracy protesters have continued to show their defiance, attending in the thousands at the most recently held protests earlier this month.

Watching the sea of young faces in the audience makes one question how their parents are holding up. Besides their obvious concern for the general well-being of their daughters and sons attending large rallies, what is their opinion of Thailand's fast-growing student democracy movement that is challenging long-held norms and traditions? How as parents can they help their child navigate these testing times?

In an attempt to see where parents stand on this matter, Life spoke with a hairdresser, a vocational education teacher, and a criminologist, all of whom are parents of teenagers and young adults.

Having to manage her salon gives Somporn little time to spend with her teenage girls, a 14-year-old in eighth grade and an 18-year-old freshman in college. Both teens are politically active and follow the protests closely but have yet to show a desire to attend large gatherings.

Somporn has been closely monitoring news of the student uprising, which dominate family dinner-time conversations. 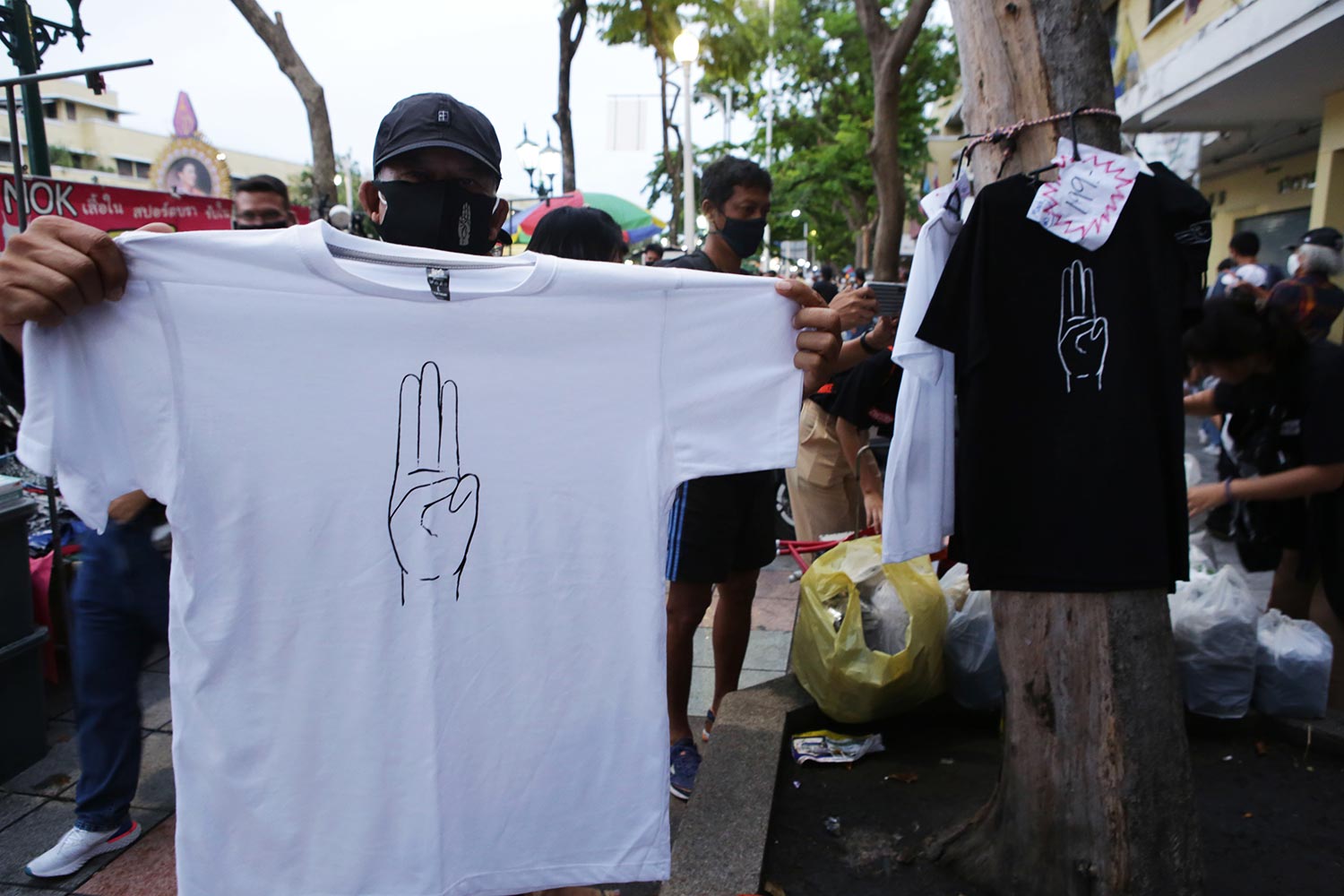 T-shirts with a three-finger salute against dictatorship.

Somporn's primary concern is her children's vulnerability to peer pressure, as their friends pressure them to participate in the protests. Her younger daughter, in particular, has begun to show emotional distress each morning as she leaves for school.

"My children are attached to their friends, which makes them want to be included in whatever they do as a group. When it comes to the protests, they felt that supporting the cause from afar was sufficient for them at the beginning, however, today it seems as if to show their solidarity they have to attend the rallies as well. The prodding puts them under pressure to attend. That is something I have qualms with," remarked Somporn.

As a mother, she shares a good rapport with her girls, and because of this, she believes it is important for her to be their confidant.

"I don't entirely discourage them from following the protests because it is important to them. Another reason is that I don't want to see them go to these rallies on a whim without informing me. That is why I make it a point to spend quality time together discussing what the students are up to. I share with them the importance of keeping a level head when it comes to becoming overly zealous about politicals. We also discuss the dangers of young students attending a protest. As a mother of daughters, I also tell them about the sexual perverts that often mingle among the crowd for gratification."

From what she has watched on television of the protests, she feels that it has given the youth a platform to speak on issues that were in the past reserved for people with a wealth of experience and knowledge. Although she believes it has served its purpose, however, she doesn't necessarily agree when protesters behave aggressively.

"As a parent, I feel that the more you force rules and regulations on your children in this generation the more they will rebel. That is why you have to explain why you are not allowing your child to attend these protests in a patient and empathetic manner.

"While I cannot stop them from following the ideologies of today's political student movement, as a mother I can share with them my concerns and why they are justified."

A father of teenage daughters, Rapeepat has mixed feelings when it comes to the ongoing student protests sweeping the nation.

"While I am happy to see our youth exercise their right to view their ideas on issues that will determine their future, I need to point out that insulting grown-ups during their protests is not by any means justifiable. They will need to take responsibility for their actions."

Rapeepat and his wife have brought up their children in a manner where they can discuss anything, including their thoughts on controversial issues. This is why it comes naturally for them to share their opinions with their parents. 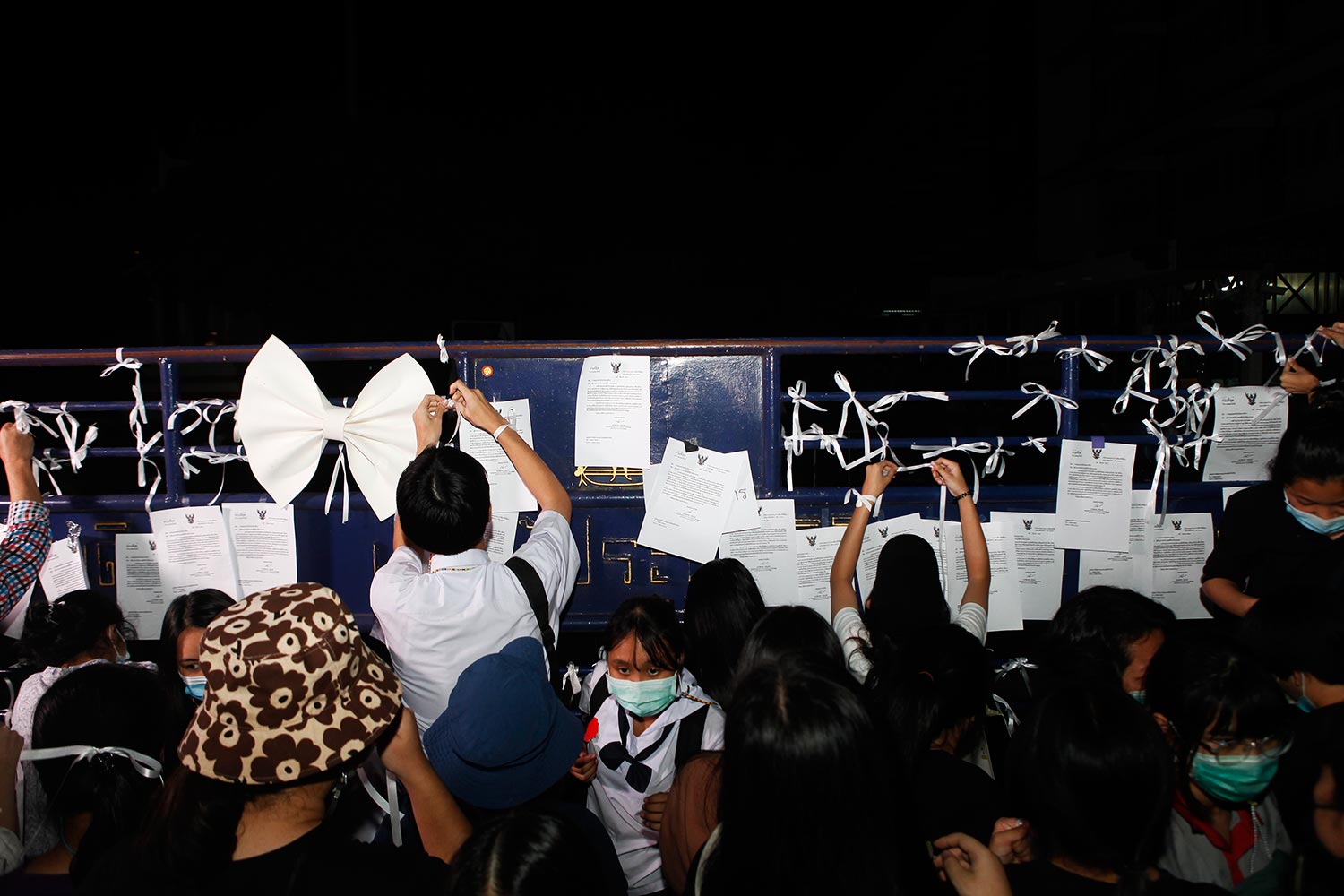 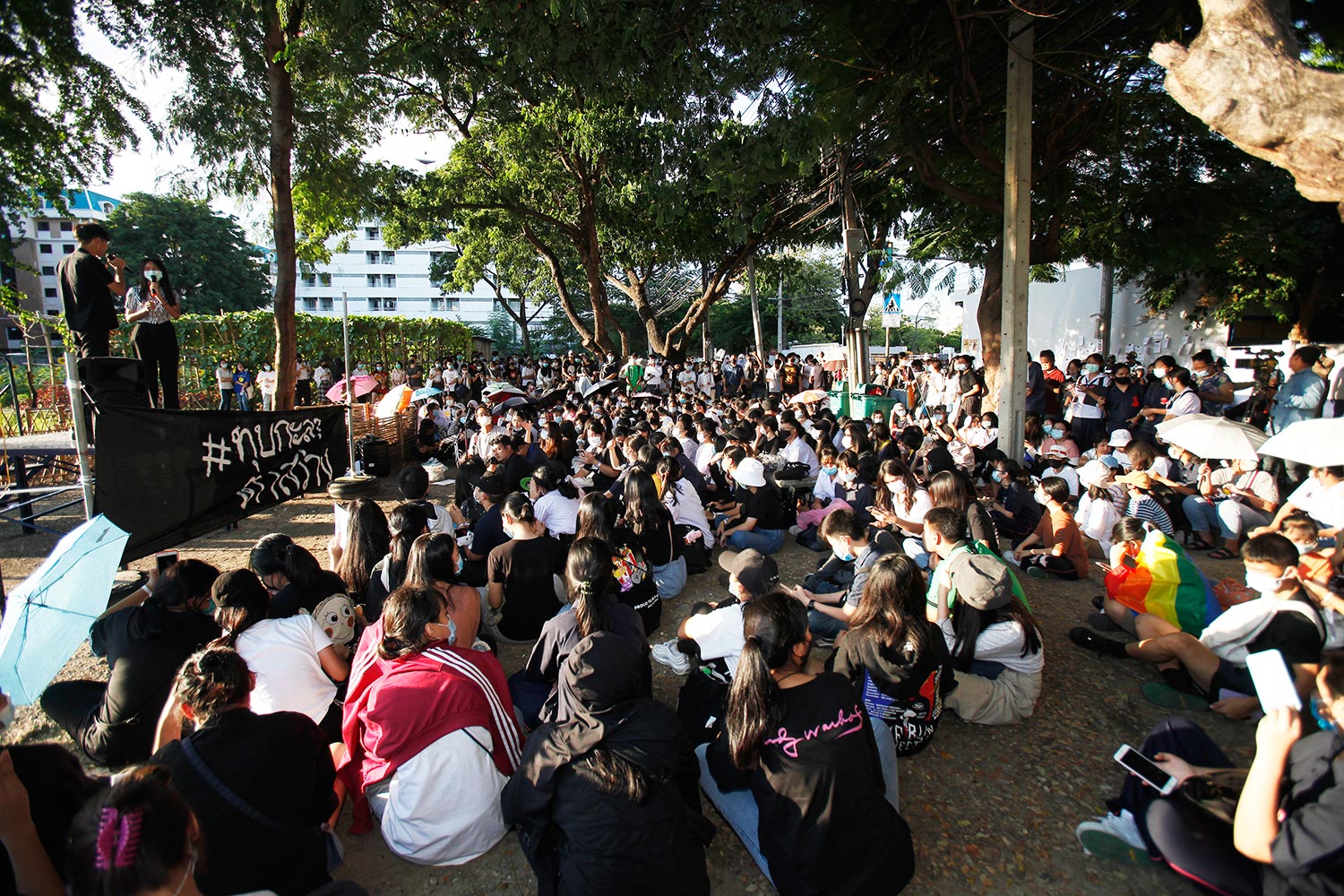 Students from various schools led by a group that calls itself ‘Bad Students’ hold an antigovernment protest outside Bodindecha (Sing Singhaseni) School in Bangkok. (Photos by Nutthawat Wicheanbut)

"While I give my children the right to decide on whether they desire to participate in the protests, I do that only after I explain the pros and cons of attending such gatherings. I speak with them at length about not falling prey to the manipulation, the dark powers that are at play."

Moreover, he teaches them that while they can voice their opinions without fear, they should do so with respect.

"Being boisterous and disrespectful dilutes the purpose of protesting for a noble cause. Thai culture frowns on ill-mannered behaviour, even though you might believe you have the right to voice your opinions in such a manner. If your words and actions come across insolent, it just doesn't serve your purpose in the long run.

"There is a level of boisterous behaviour in everyone, however, we have to learn to control it, and think before we speak. That is why it is pivotal for student leaders to master the art of sharing their opinions devoid of slander and malice."

On the positive side, Rapeepat said he found that protest leaders possess an eloquence with which they spoke that was far advanced for their age and experience. He also found the current generation much more politically savvy and confident to voice their opinions.

"Both as a parent and teacher I would just like to say that while I do not condemn the efforts of the Thai youth to be heard, I urge them to respect the opinions of people that think differently from them," remarked Rapeepat.

Piyaporn's understanding of psychology has helped her raise her two children to base their decisions on reason and not emotions.

The study of child development also helped her to pick the appropriate age bracket to teach them about mutual respect for others, becoming law-abiding citizens and to stand for what is right and just.

Her son and daughter, both in their 20s and attending university, have decided to follow the student protests but not attend huge rallies.

"I have encouraged my children to always base their decisions on reason and logic, and not necessarily on the norm. I discourage them from following anything that is irrational and goes against the law. Moreover, as both my husband and I are also lawyers we have taught our children to stand up for what is just and right in the eyes of the law.

"Parenting comes with responsibility. There is a time bracket to instil the right morals in your child. At every juncture of a child's emotional development, they are ready to learn new things. As we know, during infancy to the age of five, a child is in dire need to connect with their parents, as they grow older much of what they become is influenced by who they look up to."

In terms of the student protests, what Piyaporn sees today is that Thais know what their rights are but have forgotten what their responsibilities to society are. Rights and responsibility should go hand in hand.

"The same goes for today's student protests. Yes, you have the lawful right to protest but it should not infringe on the rights of others. You have the right to protest but you cannot break the law while doing so. This is what I have taught my children, and this is why they have decided to not actively get involved in protests where there is a breach of law. They are open to signing petitions and listening to student leaders talk on topics that don't slander others."

One cannot disregard the fact that there is enormous peer pressure on the youth today to attend these rallies.

"When my daughter's friends began name-calling her a 'black sheep' for refusing to go with them to the rallies, she was distraught. As a mother, I felt bad. I suggested that when she spoke with her friends to use language that was not for or against their ideologies, it is important to come across as being neutral. Also, be an observer rather than a person who debates on who is right or wrong. Listen to both sides of the argument and decide which side you take by who stands on reason and logic."