For the first time last week, the National Centre for Genetic Engineering and Biotechnology (Biotec) unveiled three coronavirus vaccines that are currently in development. The batch of homegrown prototypes includes two viral vector and one virus-like particle vaccine.

Of these, the adenovirus-based jab called Nastvac will enter clinical trials in humans early next year. It will be delivered through the nose rather than being injected into the arm. Scientists say intranasal vaccinations will prevent the novel coronavirus from invading the lungs.

Though small in size, the spiky Covid-19 virus causes infection by binding to receptors on the surface of human cells in the respiratory and digestive tracts like a key to a lock. For over a year, the virus has continued changing, and upon entry into the human body, it begins to build new viral particles.

"Basically, the vaccine is designed to produce an immune response. It creates antibodies to catch the spike protein and block its entry into host cells," said Surapong Koonpaew, who works in the virology and cell technology research team.

The two viral vector vaccines contain different genetic materials from the novel coronavirus. A vaccine with an adenovirus base can carry the long spike protein but the one with an influenza base can keep only the tiny receptor-binding domain of the spike protein due to a constraint.

"They remain alive but are proven safe for human use. They will be developed into a nasal spray," he told the forum on Aug 10.

Challika Kaewborisuth, a virologist in the project, said the ideal vaccine should mimic natural coronavirus infection and travel through the respiratory tract to offer better protection. An intramuscular vaccine can produce antibodies that circulate through the body but produce very few antibodies for the upper respiratory tract.

"But the intranasal vaccine can boost local immunity by building walls to prevent the novel coronavirus from entering the lung," she said. 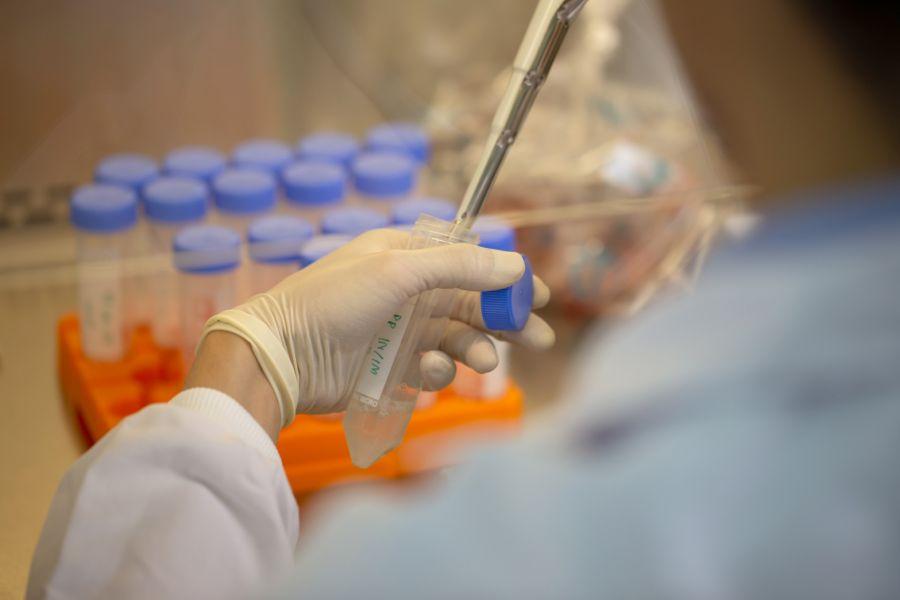 A scientist working in his lab. Photos courtesy of Biotec

Researchers have conducted tests using nasal sprays and injections on mice to measure the level of immunity. For the adenovirus-based vaccine, the nasal spray can produce a high level of antibodies for the respiratory tract and body. It produces less T-cell response but neutralises the virus as well as injection. For the influenza-based vaccine, the nasal spray can generate a satisfactory level of immunity.

But they went the extra mile by exposing vaccinated mice to the novel coronavirus to assess protection, Challika said. For the adenovirus-based vaccine, mice that were given nasal spray gained more weight in recovery than those that received the injection only. However, cross-vaccination yielded surprising results. Mice that received both the adenovirus-based and virus-like particle vaccine for the first and second dose gained the most weight, which means they were able to recover the fastest.

"The intranasal vaccine offers an advantage and cross-vaccinations makes up for each vaccine's defect to provide higher immunity," she said.

Challika said her agency will go ahead with Nastvac first because it meets safety standards. It plans to conduct clinical trials on humans with the Chulabhorn Royal Academy early next year.

"In the past, we used the original Covid-19 strain but are now replacing it with the Delta variant, which is the dominant type. We need to talk with the Food and Drug Administration to speed up the process because only the spike protein has changed," she said.

Some people question why scientists don't bother making a vaccine that provides an immune response once and for all. According to the World Health Organization, there are over 100 vaccines in clinical development.

Challika said cross-vaccination is backed by studies. In fact, vaccine developers specialise in different platforms, each of which has pros and cons. Sinovac and Sinopharm use inactivated vaccines and can be easily manufactured but face challenges in producing a strong immune response.

"The use of chemicals for killing viral particles can spoil the structure of the spike protein, which is responsible for stimulating the immune system," she said.

On the other hand, AstraZeneca and Johnson & Johnson use viral vector vaccines that can induce high immune responses but must deal with time intervals between doses because the human body develops immunity to vectors.

"If the second shot is given too quickly, antibodies will attack the vaccine, thus lowering effectiveness. The two doses must be spaced out or have different serotypes," she said.

A big question mark still hangs over the technology of messenger RNA (mRNA) adopted by Pfizer and Moderna. She said these vaccines can be easily made by synthesising genetic strands and inserting them into liposomes. In addition, they can be changed to cope with variants.

"After being used for months, how safe they are remains to be seen but there's no need to worry because the vaccine works [in cytoplasm] only for a short time and degrades," she said. 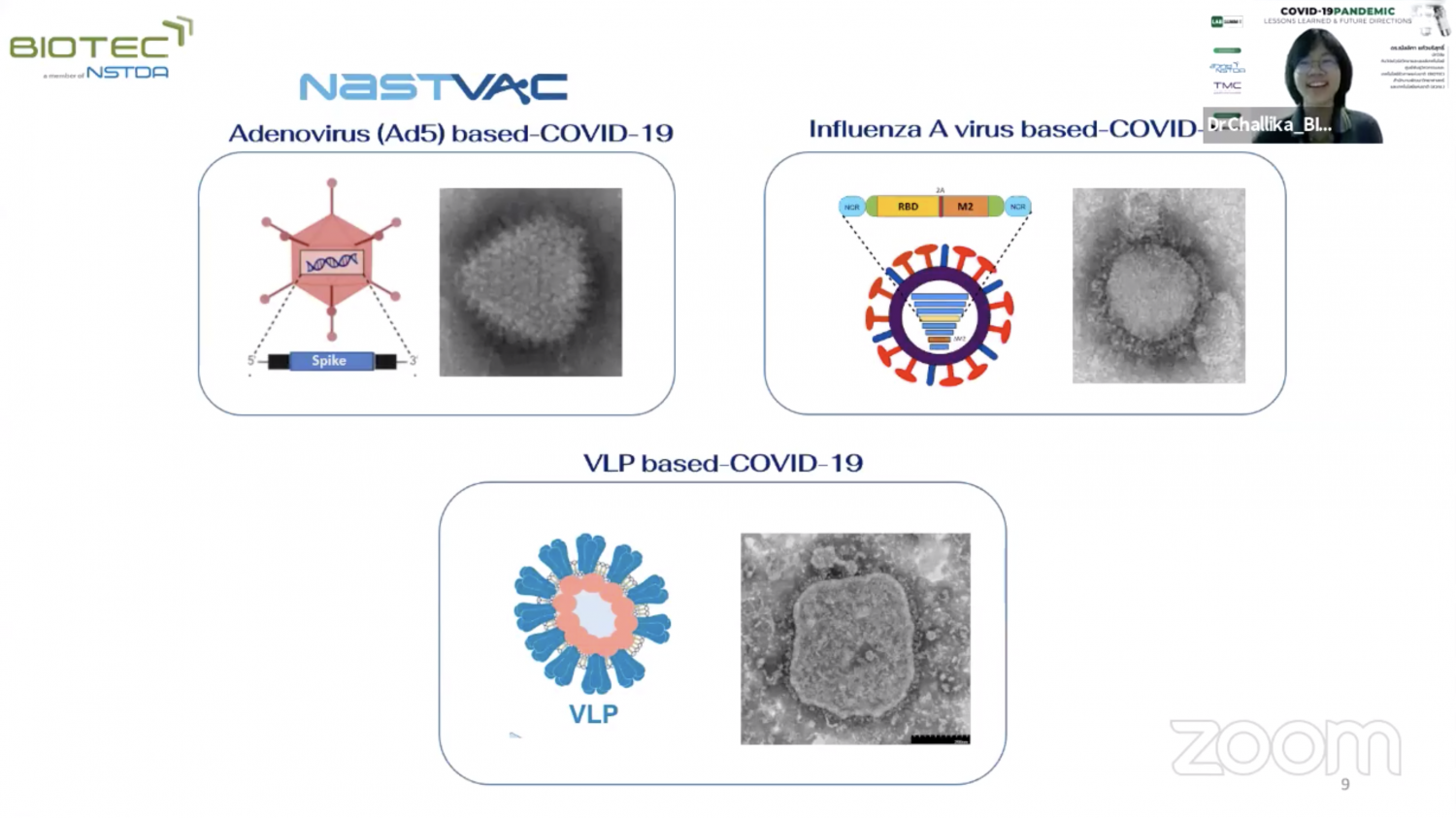 "After more than a year-and-a-half, we are still seeing infrastructure gaps and bottlenecks in vaccine development," said Samaporn Teeravechyan, a virologist in the group. One of them is the lack of facilities, including sequencing, which is the most basic service for examining the quality of vaccines.

"We are now sending them abroad. When airports halted services, we were lucky enough to count on FedEx. But if the situation gets worse, our vaccine work will stall," she said.

Samaporn said there are not enough laboratories for testing. Vaccine developers are joining the queue for animal trials. Her team is working on the original strain but when it comes to the Delta variant, they may have to wait until next year because all labs are fully occupied.

"Regardless of the fact if a new variant takes over, we can adapt our vaccine model in one or two months but the bottleneck prevents timely response," she said.

However, researchers should not tackle only the problems at hand. She said they should prepare scientific knowledge to cope with the next zoonotic outbreak. Computational platforms can be used for surveillance. Scientists should improve machine learning to classify and annotate large amounts of genomic data and model human immune responses to predict pathogens and mutations.

"We need support from those who work in bioinformatics and computational biology because virologists are clueless about how the virus will change. It needs imagination from those who can use computers for modelling and predicting it to help us develop vaccines," she said. 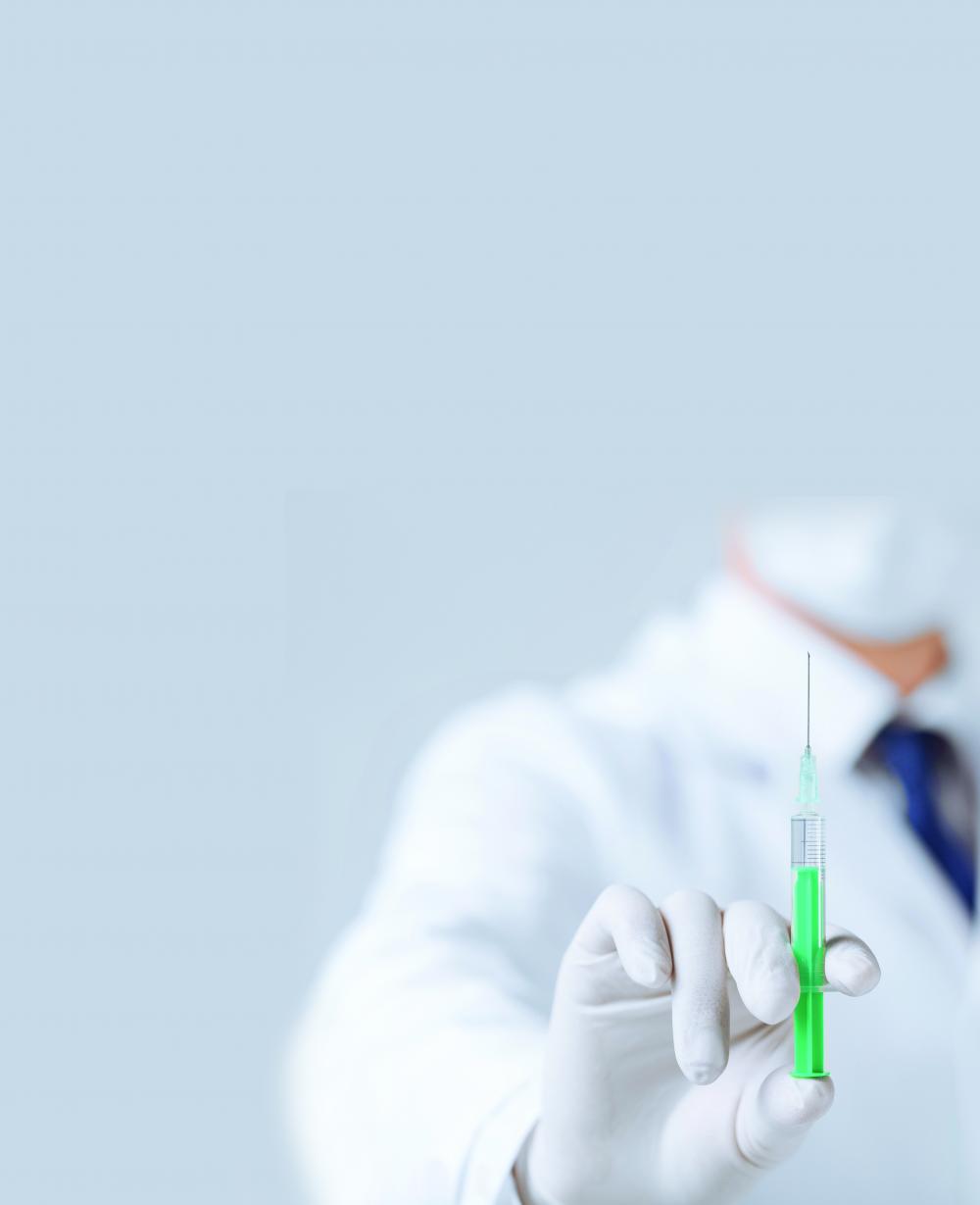