A bag of coconut coir helped lead police to the alleged killers of an ex-soldier shot three times and dumped by the side of a gravel road in Phatthalung. 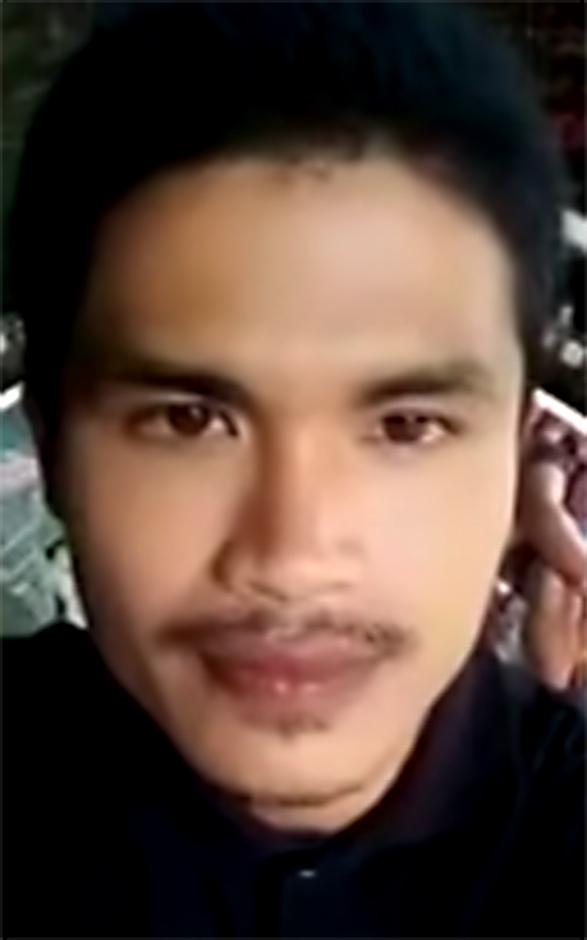 Police believe the killers used the bag to cover the head of Pol L/C Thanaphat Kongmai, 32, a former policeman in the southern border provinces, before they shot him.

Media reports compared his case to that of a drug suspect killed in police custody in Nakhon Sawan when the former Muang station chief, Pol Col Thitisan Utthanaphon, put a black bag over his head during questioning, suffocating him.

In this case, however, the victim is a former police commando, thrown out of the force three years ago due to his drug-taking habit, and the alleged killers are his own mother, her lover and a relative who tired of his abusive behaviour.

Pol L/C Thanaphat's body was dumped on Tamnan-Somkit Village Road, Tamnan, Muang district, on May 13 and found by rubber-tappers the next morning. He had been shot three times, in the head, ribs and the back.

Police say they found coconut coir (mulch) on the victim's face. That evidence and CCTV footage of the scene led them to the suspects, arrested on Sept 11. 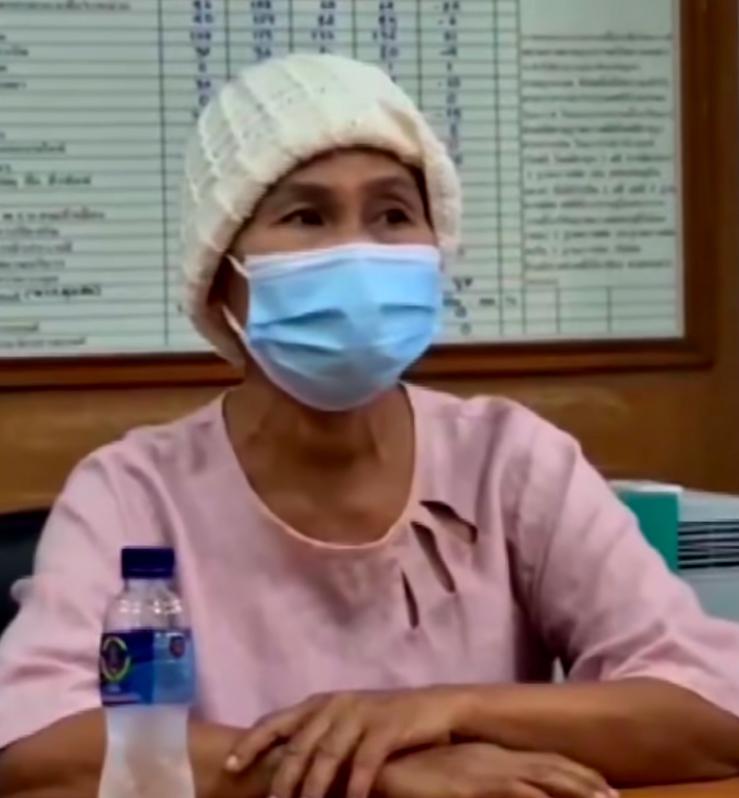 Among them was the victim's own mother, Somjit Kongmai, 54, nabbed at her home in Don Sai, Khuan Khanun district.

The other two suspects are her lover, Jittichai Jongsiri, 56, former village head in Village 3, Ban Phrao, Pa Phayom district, and a nephew of his, Chalermkiart Jongsiri, 33, who has offered to hand himself in but yet to turn up.

While Ms Somjit and Mr Jittichai deny killing Pol L/C Thanaphat, they admit he caused problems for the family.

Far from expressing remorse over his death, police say that Ms Somjit grumbled about her son's drug habit. He would fly into rages, assault her, and pawn her belongings, forcing her to spend a fortune retrieving them.

Officers from Police Region 9, Phatthalung provincial station, and Muang police, who announced the arrests, said the suspects called Pol L/C Thanaphat and asked him to meet them. From there the killers took him in a bronze Toyota pickup to the place where the body was to be found, shot him and dumped the body.

Sathit Jongket, Village 1 head in Tha Mi Ram sub-district, who lives nearby, said he heard three shots about 8pm but didn't think anything of it. "The road connects two villages, and there are many exits. But it is dark at night and few outsiders come here," he told reporters.

Initially, no one knew who it was, as no ID was found on the body. Deputy head of Police Provincial Region 9, Pol Col Sakda Charoenkul, said officers examined CCTV footage in the area and identified the pickup likely to be involved.

They tracked it to a shop in Muang district where the owner bought bags of coconut coir, which were to help pin the owner to the victim, after the coir traces were found on his face. The suspects also bought equipment for use in the killing, including two pairs of gloves, and twice took the vehicle to the scene to scout the location.

Police sought an arrest warrant for ex-village headman Mr Jittichai and his relative. Mr Jittichai quietly handed himself in on Sept 10; the next day police nabbed the victim's mother.

Charging the duo with jointly killing Pol L/C Thanaphat, police said they believe his drug-taking and abusive behaviour was more than the family could stand.

The rodent that roared

A former drug convict killed a man he had never met with a trolley because he was riding a motorcycle borrowed from a foe of his. 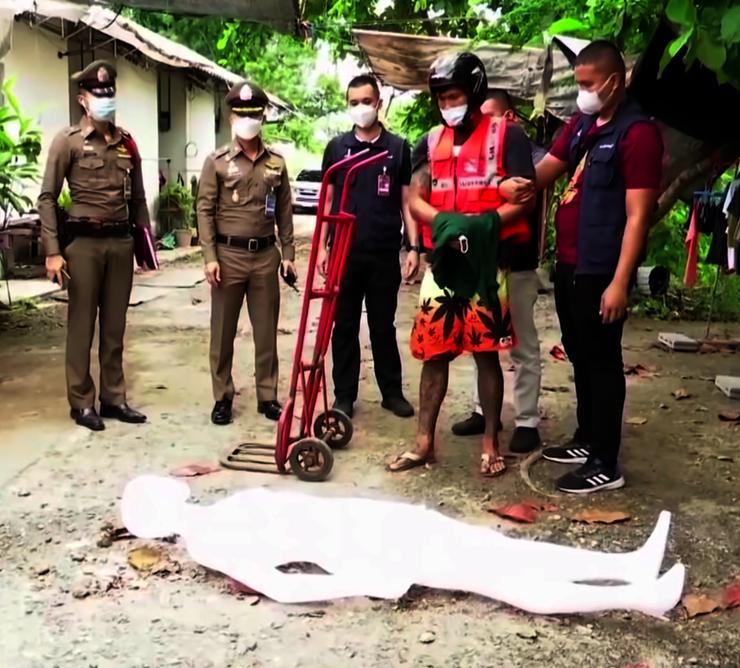 Chon Buri police arrested Wisathorn "Kik" Thawanna, 33, at a Chinese cemetery in Phan Thong hours after he killed Sawasdee Multha, 42, from Phetchabun, on Sept 11. He beat him over the head with a goods trolley outside his rental place in Muang district.

Sawasdee was visiting relatives in Soi Pong Prasert, Ban Suan and turned up on a motorcycle which Kik recognised as belonging to a neighbour with whom he had argued. Assuming he was part of the same family, he picked a fight with Sawasdee.

He punched and kicked him and when Sawasdee fell to the ground, grabbed a goods trolley nearby, hoisted it aloft and brought it crashing down on Sawasdee's head. Witnesses called for help, but the victim died at the scene.

CCTV vision shows Kik striding up and down angrily before stepping outside the frame to attack Sawasdee. That done, Kik took off on his motorbike "passively, as if nothing happened," one witness said.

Kik told police that Sawasdee came at him with a knife first, but witnesses insist Kik started it.

Sawasdee was staying with relatives, who live at the same single-storey rental place where Kik had a room. Sawasdee was visiting to help care for an ageing relative at their invitation. He had been with them just four days when he ran into Kik.

Kik, who served a 13-year jail term for drugs and was released last year, said he had turned up to clear out his room after the owner evicted him for unpaid rent.

He had lived there just two months but already had a reputation as a trouble-maker, striding about outside in just his underwear and ranting and raving in a drug-hallucinated state.

Nattinee Multha, 22, Sawasdee's niece, said Sawasdee was good natured and didn't anger easily. "I doubt he would have approached anyone with a knife," she said.

"I wonder why he had to go so far, when he didn't know my uncle," she said in tears.

Sonthiya Tha-Sungnern, a neighbour of Kik's, said he had spent time in drug rehab but gone back to the habit.

Sawasdee, who had borrowed a family motorcycle for a spin, was heading into his family's place and gave Kik a friendly greeting. The ex-convict, who recognised the motorcycle, shouted in reply: "Who the hell are you? Where do you come from?"

The visitor replied he was related to "Kong", or Chuchai Sangsawath. Kik and Kong had argued back in August, with Kong laying a police complaint of assault. "Being in a drugged state, he grew paranoid that Sawasdee, as a relative of Kong's, had come to do him harm, so started beating him up," Ms Sonthiya surmised.

At the crime reconstruction, Kik referred to himself repeatedly as Noo, a Thai word for mouse which youngsters use to describe themselves in cute, self-effacing terms with adults. Taken aback that a hard-bitten druggie, and now killer, would use such a term, police teased him about it. "Would a little mouse do something like this?" one asked.

Kik, who is covered in tattoos, shrugged off the jibe with a laugh. He declined to apologise to the victim's family, but offered to look after them financially, even though he was now headed for jail. Police charged him with intentional killing.

Boys who left their mark

Two twin boys died in each other's arms in a drowning incident in Yasothon, as close in death as they had been in life, their mother said. 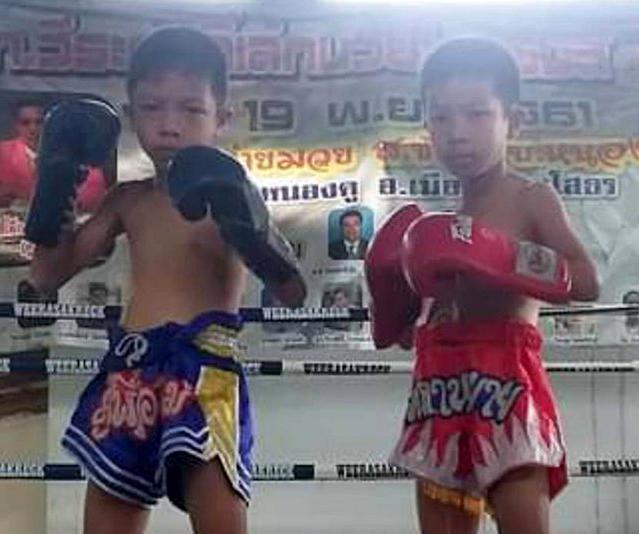 Rescue workers on Sept 12 retrieved the bodies of Punyaphat "Name" Polchai and his twin brother, Punnapop "Nes" Polchai, from Huai Thom canal, Ban Nong Koo, of Muang district. Their bodies were found in a close hug, with one boy no doubt having gone to the aid of the other, but both sinking despite their efforts to save themselves.

The pair had gone fishing with two friends and jumped into the water to retrieve their bait. Three boys jumped in, but only one made it back to shore. The twins were carried away by the strong currents but did not have the strength to swim back.

The other two boys biked back to their home village in panic, too scared to tell anyone what happened. A local passing by about 1.30pm saw the bikes, shirts and a phone left on the bank of the canal and went on FB live appealing for their owners to come forward.

Someone in the village who recognised the bikes informed their mother, Chothika Thongmanee, as rescuers and divers were alerted. She turned up in time to watch divers, after a 20 minute search, retrieve her sons' bodies. Stricken with grief, she held them in an embrace.

Speaking at their funeral at Wat Sri Thong Thong the next day, Ms Chothika said the boys were staying with their grandmother and on the morning of the incident, called to ask if they could go playing with friends. She agreed, as long as they were not away long.

The boys were keen on music and boxing, she said. They were well-known locally as muay thai boxers, with their own fighting monikers, Petch Ekk, and Petch Thor. Family videos also show them playing Thai traditional instruments at school.

Nong Auto stayed ashore as the other three jumped in the water after Nong Nes lost his bait. "The bait was caught up in the branches of a tree about 5m away, so they went in to find it. The currents were strong and only Nong Khao Pun made it back," Nong Auto said.

Ms Chotika said she was not upset that the boys failed to alert anyone, as they were just kids. She was not surprised the boys died hugging each other as they loved each other very much. "They were born together, so it is only natural they should leave this life together too.

"They were good kids, polite, and really into their activities. Nong Name told me two days before that Nes was about to die. I thought it was odd he would say such a thing, but now I think he saw a premonition," she said.