Bright side of the Moon
Life
Social & Lifestyle

With this week's Mid-Autumn Festival and the auspicious Full Moon on Tuesday, Elite Life updates on the lunar novelties launched this year.

The classic moon phase complication has evolved in following the progression of the celestial body through its different phases.

Conventionally featuring a little moon in a small aperture, the displays have been reimagined in various designs that portray Earth's sole natural satellite, often against the beauty of the night sky. Besides the aesthetics, the mechanical aspect is as intriguing in precisely tracking the body. 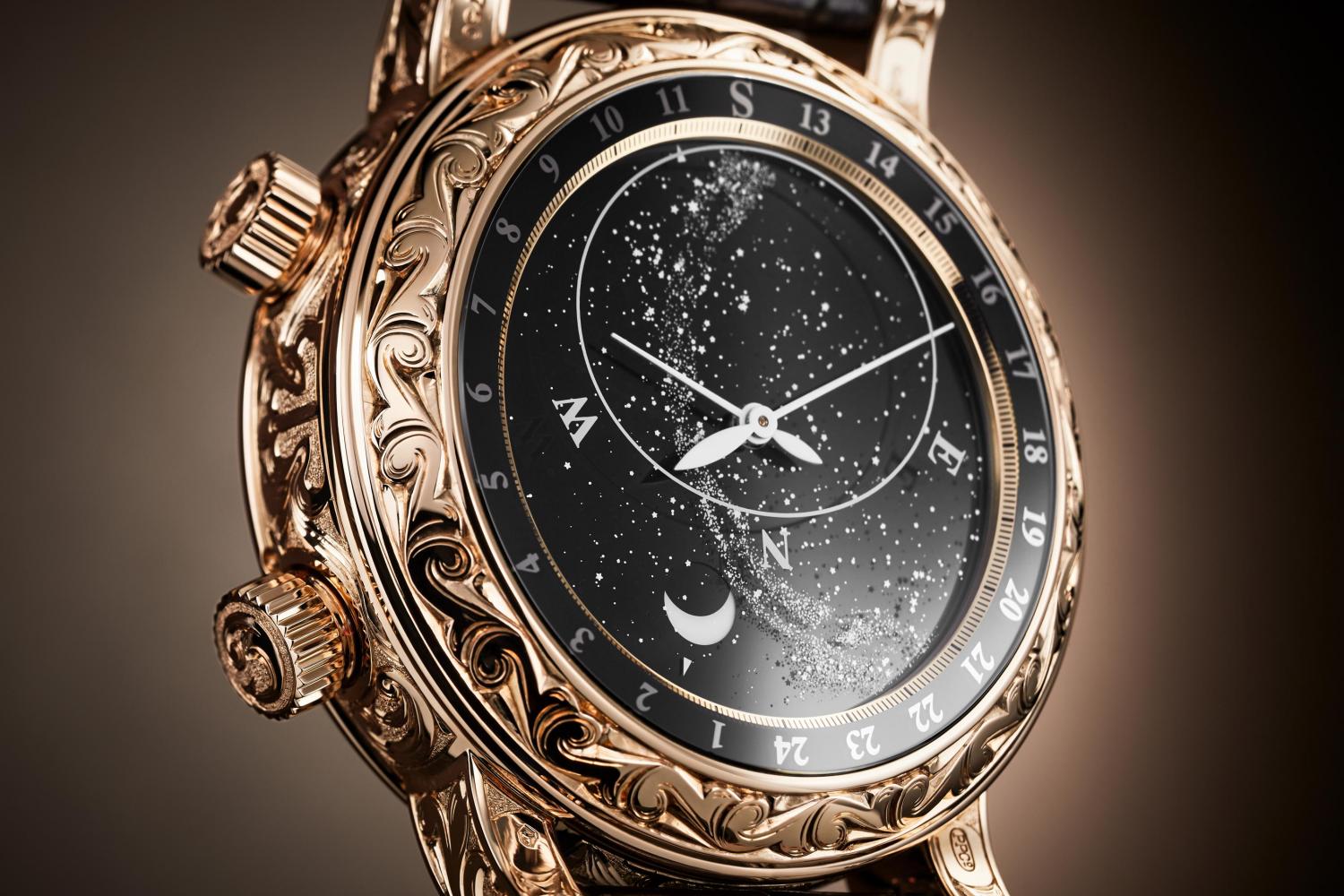 Launched in 2001, the Sky Moon Tourbillon is Patek Philippe's second most complicated wristwatch combining 12 complications, including a minute repeater that strikes on cathedral gongs.

The front dial shows a perpetual calendar with a retrograde date, a moon-phase display and the leap year cycle. The other side shows a celestial chart on which the apparent motion of the moon and the stars can be viewed from the northern hemisphere. To orchestrate the grand ballet of the celestial bodies, Patek Philippe developed a system of three superposed discs that move in different, precisely calculated trajectories. 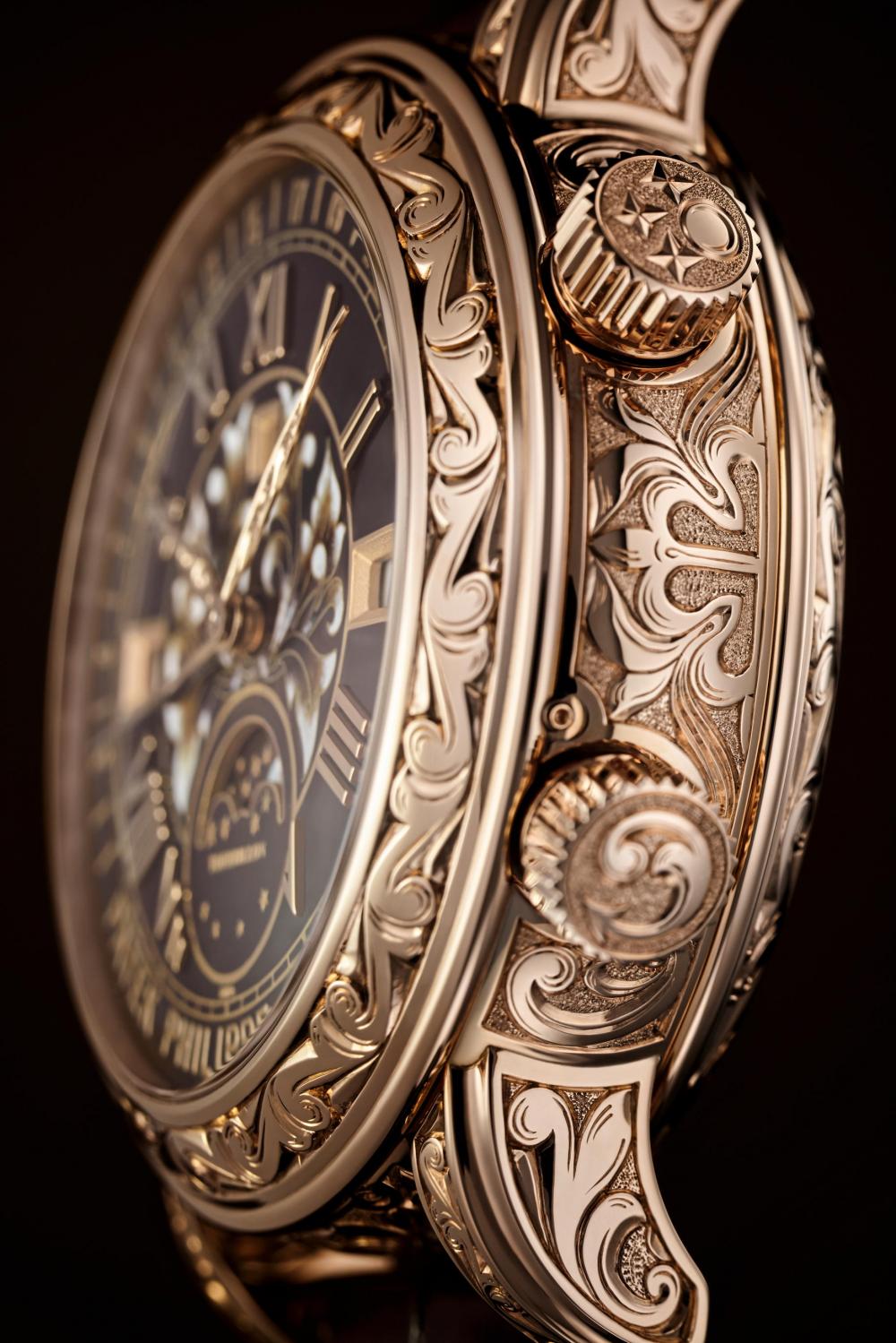 The periphery of the dial, the moon-phase aperture, and the moon of the rotating disc are executed in the grand feu champlevé enamel. The centre of the dial features a decor in grand feu cloisonné enamel that was created with the help of thin flat gold wire.

The case, the crowns, the repeater slide and the fold-over clasp are manually engraved with a motif of volutes and arabesques on all sides, requiring more than 100 hours of work and considerable patience to complete the process. 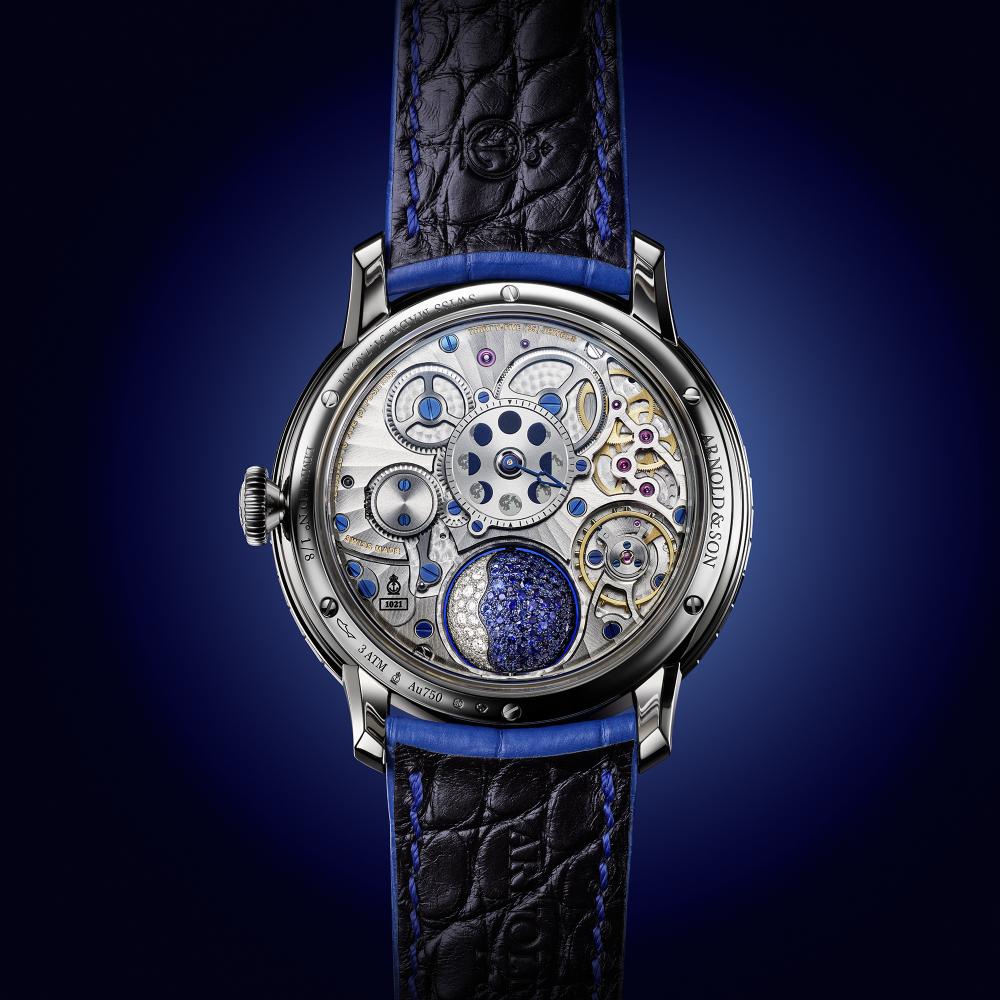 After Luna Magna, Arnold & Son set out to create a series of jewellery interpretations of its three-dimensional moon model.

Baguette-cut diamonds adorn the white gold case and lugs of the Luna Magna Ultimate I. Evoking the ring around Saturn, the bezel features a dual-row invisible setting of the precious stones that enhances the radiance.

Hundreds of pure ruthenium crystals make up the sparkling blue façade of the dial. With Roman numeral markings, the off-centre subdial owes its delicate colour to white opal. 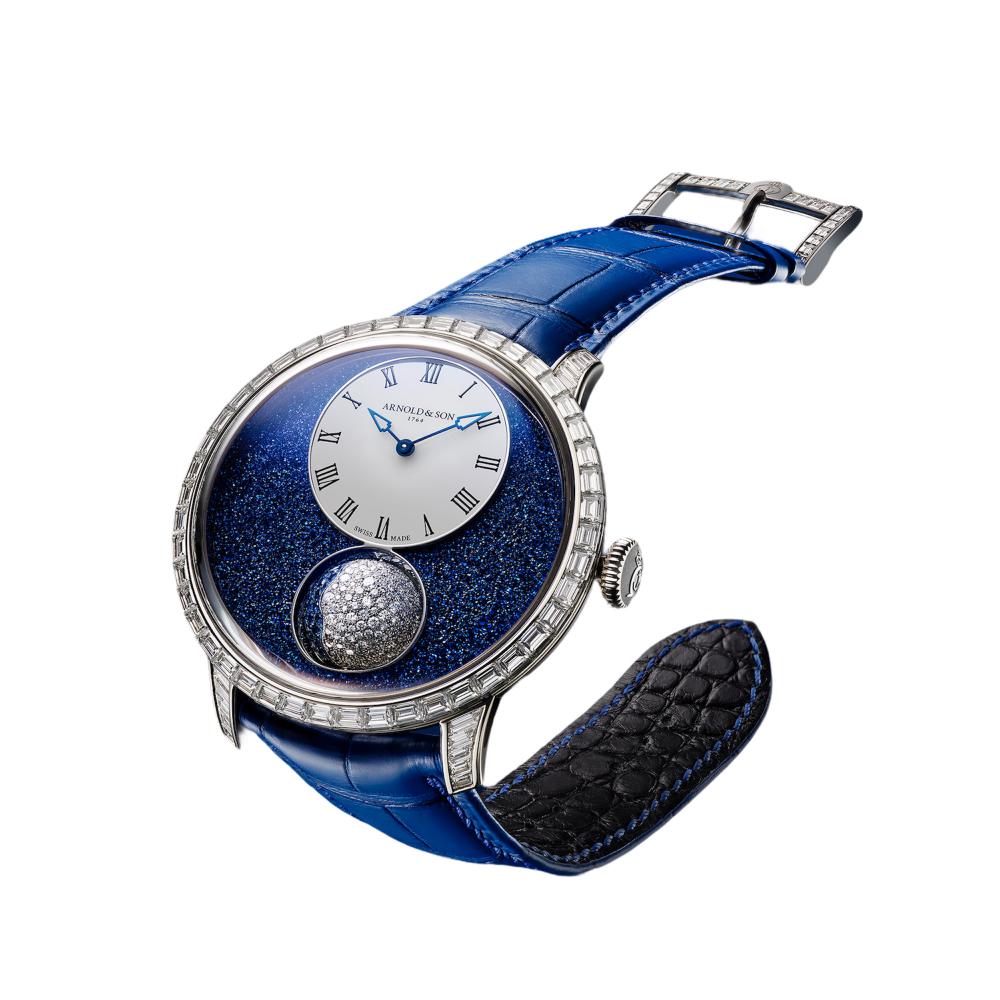 At 6 o'clock, the magical white gold sphere is intricately paved with brilliant-cut diamonds and blue sapphires, to poetically represent the Moon during the day and night.

Designed around the lunar globe, the hand-wound calibre is entirely developed, manufactured, assembled and adjusted in-house. The movement provides a second display of the lunar phase, revealed by the sapphire crystal caseback.

The length of a Full Moon cycle is 29 days, 12 hours, 44 minutes and 2.8 seconds. Arnold & Son has ensured that it would take 122 years for the movement to accrue a one-day interval between the watch display and the true celestial cycle. Nevertheless, this error is easy to correct given that the lunar function is directly accessible from the crown. 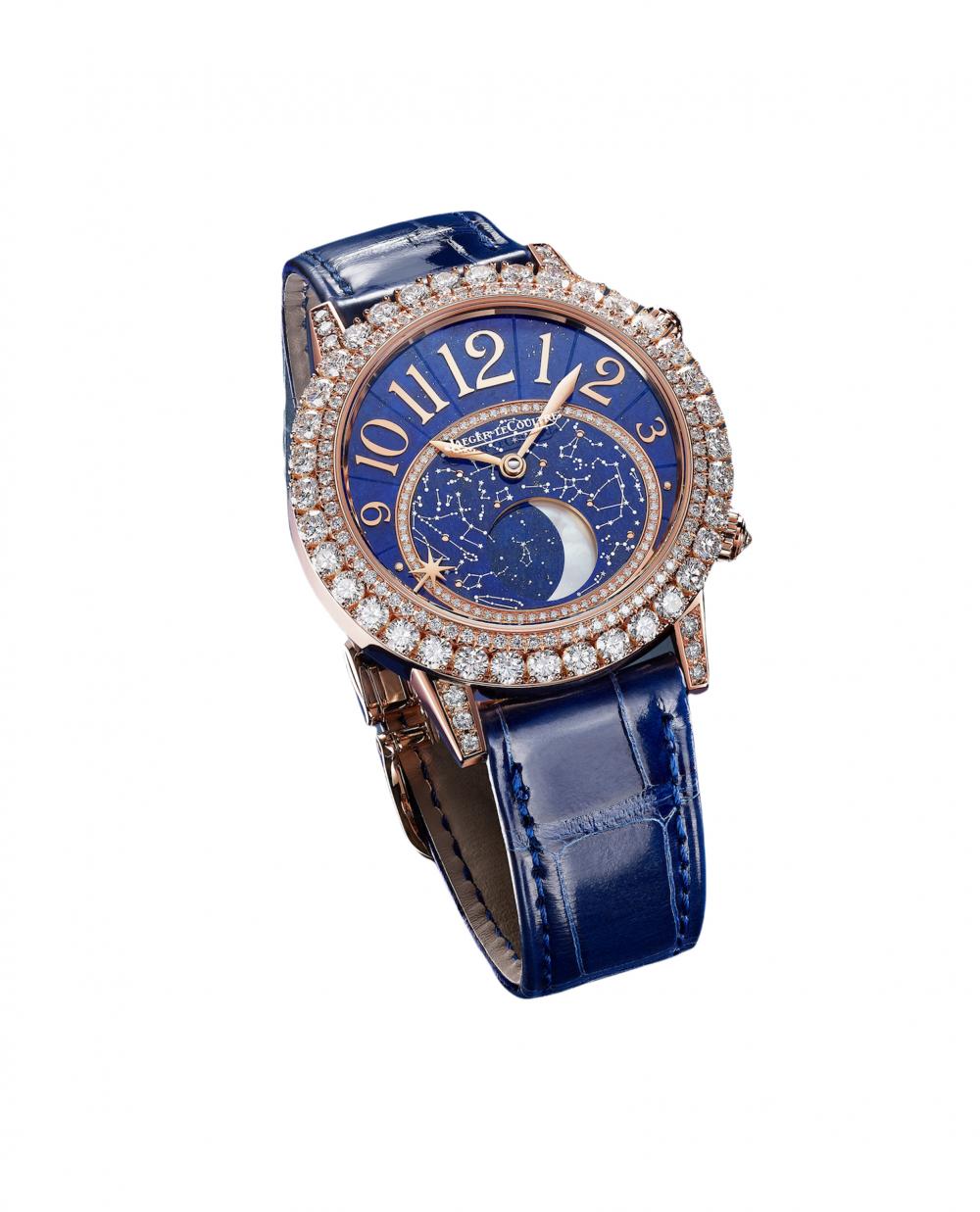 Jaeger-LeCoultre's glittering women's watch boasts a lapis lazuli dial, whose deep blue hue evokes the colour of the sky at the moment when day turns to night.

A classical prong setting technique was used for large diamonds that form the outer circle. The fine gold claws hold the precious stones high, allowing light to pass through them from every angle, giving an impression that the entire circle is almost floating around the pink gold case, rather than anchored to it.

An inner circle of grain-set diamonds adorns the bezel, and more diamonds sparkle on the upper surfaces of the lugs and the crowns.

On the upper part of the dial, applied "floral" numerals mark the hours. Graduated in size, they form a broad arc, soaring above an elliptical band of diamonds that outlines the lower dial.

Glowing against the deep blue background, the large moon shimmers from its mother-of-pearl surface. On the celestial map, tiny golden hemispheres have been applied to the lapis lazuli to mark the brightest stars of each constellation.

Set on the edge of the dial, the emblematic golden star marks the time of a special appointment. It is moved into position by turning the second crown at 2 o'clock.

The self-winding movement assures the accuracy of its large moon-phase display, which needs no adjustment for 972 years.

Hermès unveiled an offbeat expression of the classic complication in Arceau L'heure De La Lune with prominent celestial bodies and a simultaneous display of moon phases in both northern and southern hemispheres.

The double moon has been miniaturised for the Slim d'Hermès Squelette Lune with a black gold sunburst flange and grey-transferred minutes track. Slender blue hands sweep the skeletonised dial, whose deep shades are accentuated by an airy architecture and alternating matt and glossy finishes.

An audacious juxtaposition of materials, the bead-blasted titanium case-middle is topped by a precious platinum bezel and a white gold crown, creating subtle light and texture effects.

The hours, minutes and moon phases beat to the rhythm of the ultra-thin self-winding H1953 Manufacture movement, adorned with the "sprinkling of Hs" motif. The movement, case and strap are crafted by artisans in the Hermès Horloger workshops in Switzerland.