Reminiscent of the scene in Oscar-nominated film The Two Popes where Cardinal Julio Bergoglio (Jonathan Price) was led by the Swiss Guards up the long staircase to have audience with His Holiness Pope Benedict XVI (Anthony Hopkins) at the Apostolic Palace, a group of Buddhist monks and laymen were guided by soldiers in colourful uniform towards the private quarters in Vatican City. Dazzling and brilliant shades of yellow and saffron worn by Theravada and Mahayana delegations contrasted strongly with Renaissance frescoes decorating walls and ceilings.

This auspicious and historic encounter between Christianity and Buddhism took place last month in the Clementine Hall (Sala Clementina) at the Apostolic Palace near St Peter's Basilica.

The Apostolic Palace is a conglomeration of buildings located near the Sistine Chapel in the northeast part of Vatican City. With a commanding view of St Peter's Square, the palace houses both the Papal Apartments and the Office of the Pope. The visit was led by Somdet Phra Maha Thirachan, abbot of Wat Phra Chetupon Wimonmangklaram, and Phra Yongchai Sriwiphasathit, abbot of Wat Mungkorn Kamalavas, on the occasion of the 50th anniversary of the historic meeting of His Holiness Pope Paul VI and Somdet Phra Wannarat (17th Supreme Patriarch of Thai Buddhism). Among the delegation on this trip were Phra Dharma Bajiranyanamuni Phawanavidhisuvithan Srilajahnsuvimol Kosonkitchanukit Mahakanisorn Bobornsangaram (Ajahn Jayasaro), of the renowned bhikkhu in the Forest Tradition and Thapana Sirivadhanabhakdi, representative of the laymen from Wat Phra Chetupon.

As 109 members of the delegation gathered in the Clementine Hall the atmosphere was full of excitement. Cardinals and papal officials mingled with visitors in preparation of the audience as a variety of gifts were arranged on tables. When seated, the viewers could not resist the spectacular ambience around them especially the frescoes immaculately decorating the walls and ceilings. The Clementine Hall was established in the 16th century by Pope Clement VIII (1592-1605). It has been used as a reception room and for various ceremonies and rituals. Decorated in Renaissance style with perspective and tromp l'oeil effect, the frescoes by Paul Bril, Cherubino Albertini and Baldassare Croce depict scenes of the Martyrdom of St Clement, the Baptism of St Clement, the Apotheosis of St Clement, allegories of art and science, and allegories of cardinal virtues. Layers of Christian symbology and ecclesiastical practice juxtaposed with Theravada and Mahayana monks clad in ochre, orange, saffron and yellow were mesmerising. 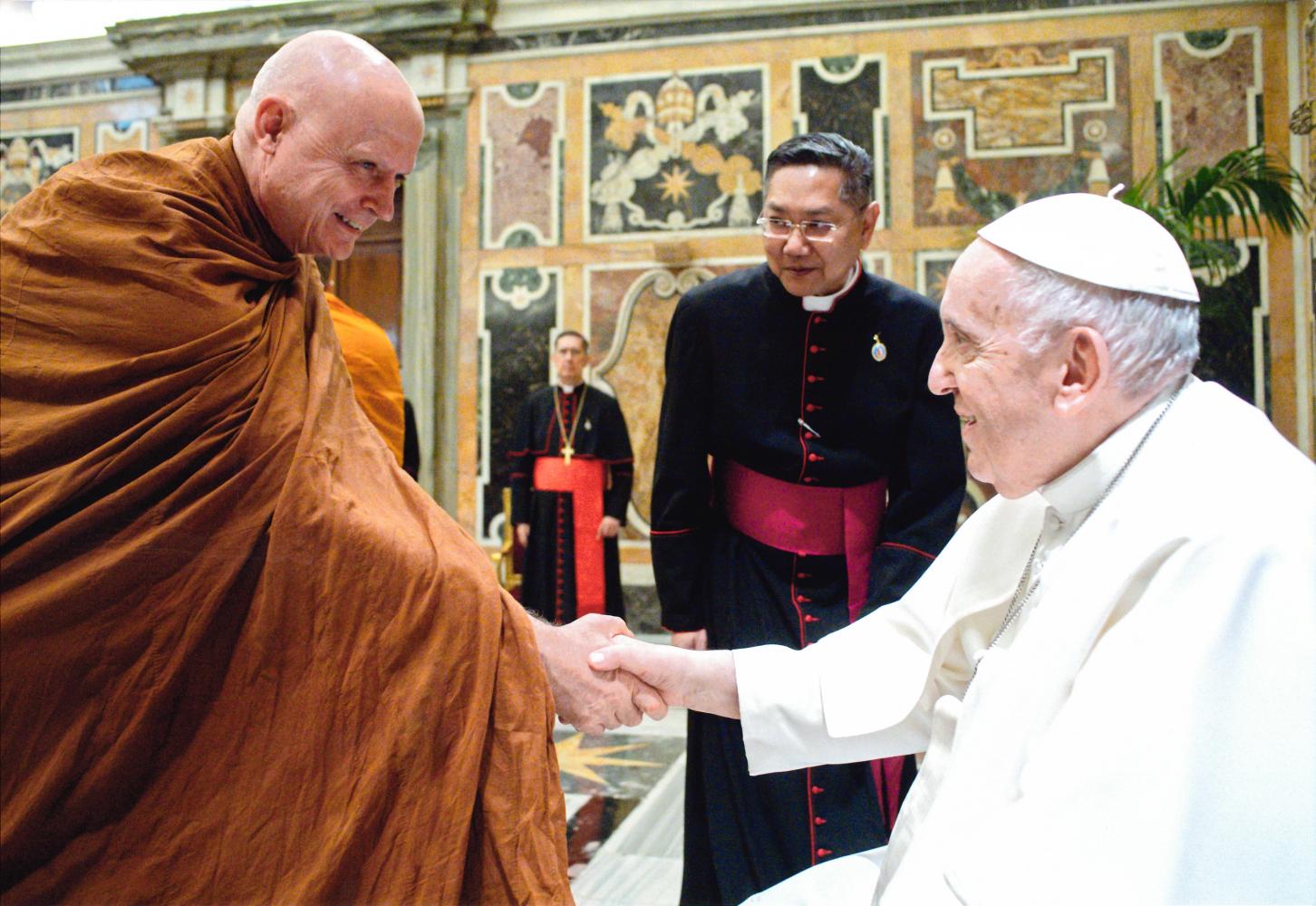 After over an hour of anticipation, His Holiness Pope Francis entered the Clementine Hall in a wheelchair, full of warmth and smiles. The address by Somdet Phra Maha Thirachan, who was assigned by Supreme Patriarch Phra Sri Ariyavongsagatanana IX, was delivered. He remarked on friendship between two traditional religions and the golden jubilee of the meeting of Somdet Phra Wannarat and Pope Saint Paul VI on June 5, 1972, as well as the visit of the Thai delegation from Wat Phra Chetupon to Vatican City in 2018 and Pope Francis' official visit to Thailand in 2019.

The address of His Holiness Pope Francis to the Buddhist delegation from Thailand was sensitive and moving.

As His Holiness remarked: "At a time when our human family and our planet are facing threats, such friendly dialogue and close collaboration are all the more necessary. Sadly, on all sides we hear the cry of a wounded humanity and a broken Earth. The Buddha and Jesus understood the need to overcome the egoism that gives rise to conflict and violence. The Dhammapada sums up the Buddha's teachings thus, 'To avoid evil, to cultivate good, and to cleanse one's mind -- this is the teaching of the Buddha'. Jesus told his disciples, 'I give you a new commandment, that you also should love one another. Just as I have loved you, you also should love one another'. Our task today is to guide our respective followers to a more vivid sense of the truth that we are all brothers and sisters. It follows that we should work together to cultivate compassion and hospitality for all human beings, especially the poor and the marginalised."

His Holiness urged fraternal dialogue with members of the Dicastery for Interreligious Dialogue and the Catholic community in Thailand. 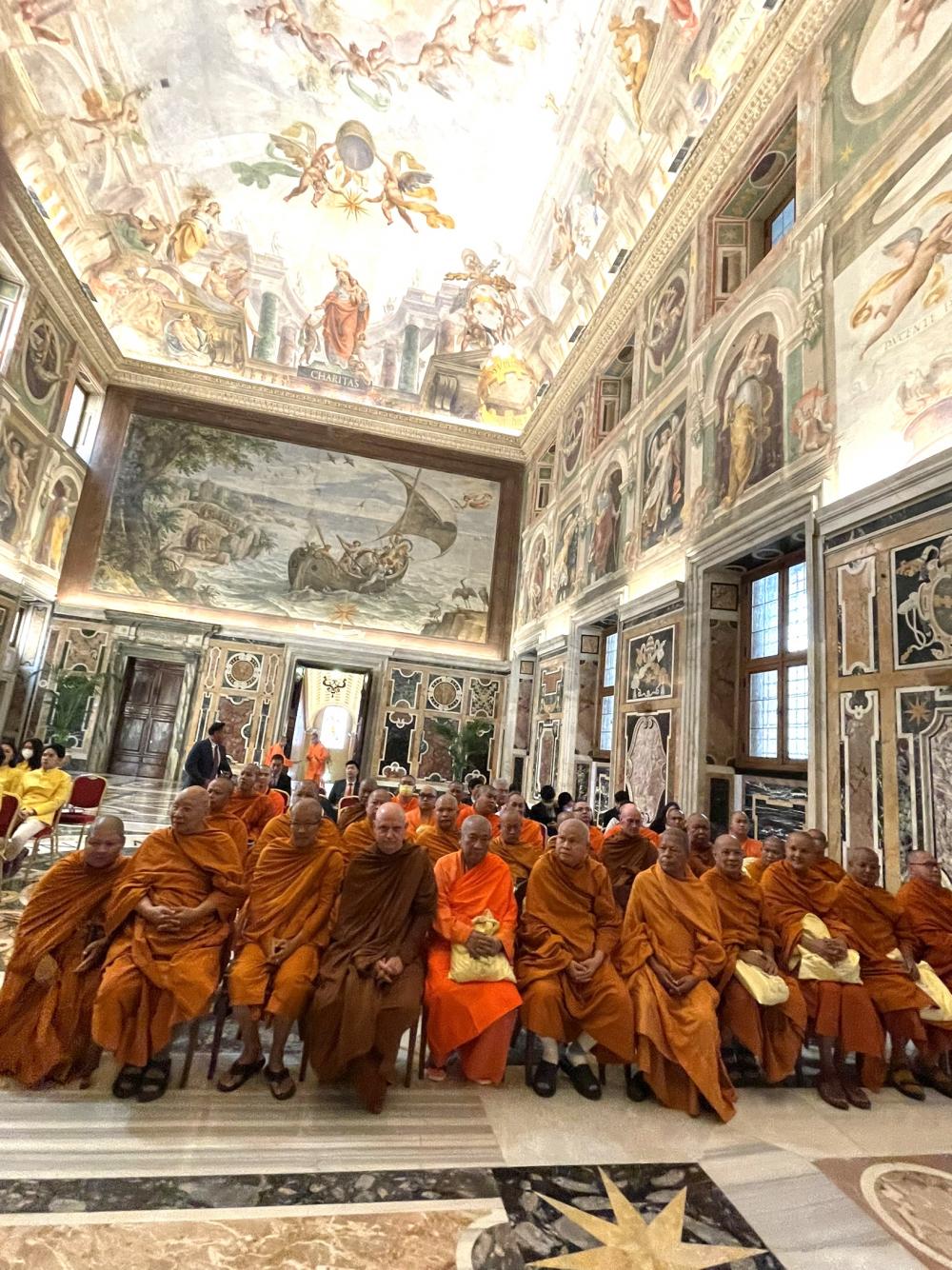 After His Holiness Pope Francis' moving speech, each member of the delegation was allowed to personally greet and touch his hands. Symbolically, it was an act of faith and trust as not a single person in the Clementine Hall wore Covid masks and no ATK tests were required before entering the sacred hall. As the meeting came towards the end, loud Buddhist chanting by the monks blessed His Holiness Pope Francis. It was a moment of surprise and revelation as resonating sounds of Buddhist chants were heard for the first time in the Clementine Hall. Looking up the dome ceiling scenes of the Apotheosis of St Clement depict the late pope rising to heaven to be greeted with God, Mary and Jesus. Instead of hymns that praised the Lord, Buddhist chanting gave warm blessings to His Holiness Pope Francis and Christianity.

Then with surprise and awe, instead of heading for the papal exit, His Holiness Pope Francis turned his wheelchair towards Somdet Phra Maha Thirachan. Both clasped hands with affection among voices of praise and clapping hands. Some wept while others smiled with pleasure and delight. Indeed, those precious moments became a once-in-a-lifetime experience and historic encounter as Christianity and Buddhism fused with compassion and peace.

The memorable event in the Clementine Hall was not the only highlight of the Buddhist delegation. Earlier that morning, Somdet Phra Maha Thirachan, Phra Yongchai Sriwiphasathit, Ajahn Jayasaro, Thapana and selected Theravada and Mahayana monks and laymen attended a meeting with Monsignor Indunil Kodithuwakku, Dicastery for Interreligious Dialogue. Topics related to kalayanamitta, the Buddhist concept of admirable friendship, good friend, noble friend and virtuous friend, were discussed in context of Christianity. As humankind struggles with hatred, violence and trauma, issues related to the opposite of kalayanamitta were raised. In the afternoon, a conference entitled "Friendship Between Buddhists And Christians For A Culture Of Encounter" at the Pontifical Urban University was comprised of scholars who spoke on the theme of friendship from Christianity to the philosophical thinking of Aristotle and Socrates. Phra Rajapariyattimuni delivered a memorable speech on definitions of kalayanamitta in Buddhist practice which was followed by a video presentation by Thapana on the history of amicable friendship between the Vatican and Wat Phra Chetupon.

The pilgrimage also comprised visits to Pontifical Gregorian University, the Thai embassy in Rome and trips to Assisi, Tivoli and Florence, and a memorable tour of the Vatican Museum, the Sistine Chapel and St Peter's Basilica, as the orange-saffron clad monks became an attraction among visitors and tourists. They experienced all kinds of Vatican treasures such as Greco-Roman classical sculptures, the Gallery of Tapestries and Gallery of Maps, and the Raphael Rooms. The highlight of the tour was the Sistine Chapel executed by several Renaissance painters including Perugino, Ghirlandaio, Signorelli and Botticelli.

Michelangelo's masterpiece on the ceiling depicts scenes of the Old and New Testaments. On the wall behind the altar, Michelangelo painted The Last Judgement with images of hell, doom and tormented nude figures. The Papal Master of Ceremonies Biagio da Cesena demanded them to be removed because of their nudity. Michelangelo refused and instead painted Biagio as Minos, judge of the underworld, with donkey ears while his nudity was covered by a coiled snake. This was an example of Renaissance artist's reaction to censorship.

Much can be learned from this trip by the Buddhist delegation. The celebration of friendship between Christianity and Buddhism has come at a crucial time when humanity has suffered immensely from war, famine, plague and poverty. Through common understanding of empathy and compassion, the virtuous and kalayanamitta power is far beyond the artificial soft power widely promoted for the sake of economic and political goals. It was a great shame, however, that neither Thailand's deputy prime minister nor the minister of culture were present at this historic occasion. In fact, not even a representative from the Department of Religious Affairs attended. Perhaps they were not aware of this extraordinary meeting in Rome.

Dedication, energy and support by various sectors including the abbots of Wat Phra Chetupon, Wat Mungkorn Kamalavas, the Embassy of Italy in Bangkok, the Embassy of Thailand in Rome, Monsignor Indunil Kodithuwakku, Monsignor Andrew Vissanu Thanya-anan and Thapana need to be highly praised. They helped create a joyous and momentous occasion as Christianity and Buddhism warmly joined hands.