The way food was prepared and served in the past reflects the less harried lifestyles of earlier generations, starkly contrasting with our own

If you want to know what Thai food was originally like you'll have to forget almost everything food-related that you see now, because cuisine in this country is an art that is constantly on the move. In each era it reshapes itself to conform to the prevailing environment and society, responding both to the creative influences and needs of those who prepare it. 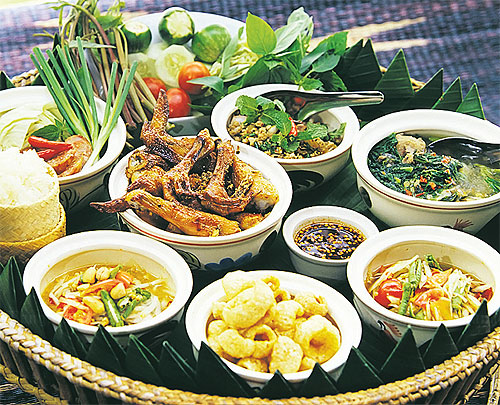 FINGERTIP FEAST: a ‘samrap’ (tray) of Isan food. Below, a samrap prepared for a temple event.

Thai food in its original form evolved in a society where the pace of life was unhurried, where it was necessary to economise, and where most of the ingredients used to make it were seasonal and close at hand. When it was necessary to buy something, it was purchased only in the quantity needed.

It is interesting that even though there was quite a lot of time available for preparing food, many dishes were very easy to make. There were some recipes, however, that were complicated and did take time to prepare, with many different steps. All in all, if the food of the past is studied closely, it can tell a good deal about the society of its time.

Another important aspect of Thailand's culinary culture, and one that is fun to consider, is the way food was eaten in the past. It, too, tells a lot about the lifestyle of the time, no less than the dishes that were served. 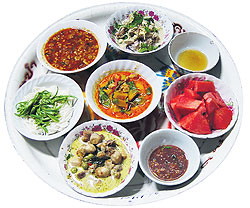 One style of traditional Thai house whose history extends far back into the past was open and spacious. The only rooms that were completely private were the bedrooms. Otherwise the interior consisted mostly of a big, all-purpose room which could be used as a guest room; or for afternoon naps or for work. The only furniture was a cabinet for valuables. There were no tables or chairs.

The other important part of the house was the kitchen, which was located apart from the other rooms. There was a large water jar set nearby, and a wooden cabinet for keeping food, which was prepared while sitting on the floor.

When the food was cooked and ready to be saved, the housewife placed it on a tray called a samrap and then carried it to the dining area. The plates and bowls containing the different dishes were set out and the meal was ready to be eaten.

The dining area was not always in one fixed location, because Thais tended to move it around. Different things may temporarily have been set on the spot where breakfast had been eaten so lunch was served someplace else. Once the dishes had been taken from the spot where supper was eaten and the food put in the wooden food cabinet, that part of the floor might be used to repair fishing equipment, or to recite prayers.

When seated on the floor to eat a meal, the family members would form a circle. This was convenient if relatives or friends came by to eat, as the circle could expand outward automatically. And it was not only inside the house that people ate in this way. Out in the fields, when lunchtime came a loincloth or mat woven from banana leaves would be spread out on the ground and everyone would sit around the food and eat. 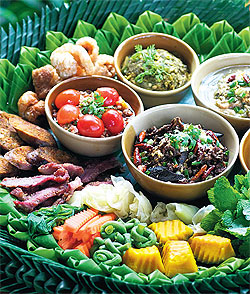 In Buddhist temples, too, the monks all ate at the time same. People employed by the temple would prepare a place for the monks to eat while seated on the floor. If there were many monks, they would sit in several circles. When a festival or other big event was being held at the temple, samrap of food would be prepared for the participants, who would be invited to sit in circles on the floor to enjoy the meal. It was not necessary for the people seated together to know each other. While eating they would start talking together in the friendly, mealtime atmosphere where everyone is polite and courteous. The conversation would flow in a comfortable direction, without any mention of deaths or political issues.

Today so much of the lifestyle of urban Thais has to do with saving time, and their houses are fully furnished, with tables and chairs for eating both inside the house and outside. But when they attend an event at a temple or travel to rural areas upcountry where people eat seated on the floor, they easily adapt to the old, traditional way. It is an instinct with cultural roots that go deep.

If used to dining at a table visit the countryside and join in for a meal eaten while sitting in a circle on the floor, it creates friendly feeling and a bond between the urban and rural members of the group. For example, if a Westerner marries a Thai girl from a rural area and goes to her parents' home to visit her relatives and friends, then joins in a meal served on the floor in the traditional way, even though it may be uncomfortable for him, it is seen as a polite gesture that makes him part of the family.

And the word ''samrap'' does not refer just to the tray on which it is served. It also has significance connected with the kinds of food included in the meal. There must be a balance between the different dishes that make it up. There should be a nam prik (chilli dip sauce) served with fried pla tu (mackerel) and fresh or lightly boiled vegetables, balanced by a bland soup. If a kaeng som (a sweet/sour/mildly spicy soup) is served, there should also be scrambled eggs. A kaeng khio wan (a spicy, coconut cream-based curry) calls for pak khana pad kap pla khem (Chinese broccoli stir-fried with salted fish). Kaeng pa pla het kon (a very spicy termite mushroom curry made without coconut cream) should be balanced by gung thawt krathiem prik Thai (shrimp fried with garlic and pepper).

The samrap and the food it contains can reveal the way of living and social status of the household in which it is served, too. In a well-to-do household it may contain a wide variety of dishes, while in a less affluent home there may be only a very spicy dish and blander food to balance it.

Although Thai cuisine is a living art that is constantly in motion, and very different now from what it was in the past, the way it is eaten, and the manners and courtesies associated with it, remain firmly entrenched in our culture. They must be preserved so that they remain that way in the future.

In Cannes, it's cinema as usual

Korean centre opens its library to all