Wanida "Gybzy" Termthanaporn is best known as a member of Girly Berry, the sexy foursome whose videos have raised many conservative eyebrows while racking up millions of YouTube clips. In her latest film, however, she puts the dance moves on hold to explore a theme to which most can relate _ the often awkward lives of teenagers going through the high school experience.

She co-stars in Chookiat "Madeaw" Sakveerakul's Grean Fictions, opening in cinemas on Friday, as Tip, the older sister of the film's star Tee, played by Pattadon "Fiat" Jan-Ngern, a young high school boy in Chiang Mai and his misadventures in film-making.

Tee begins shooting videos of his friends shortly after joining a film club. To his astonishment, the resulting clips _ the "Grean Fictions" of the title _ prove a big hit on YouTube. "Grean" is teenage slang for uncool and the videos strike a chord with viewers who can identify with the often "grean" real-life dramas of life as a high school student.

"This movie reminisces about growing up, particularly as a male teenager hanging out with your friends and so many things are 'grean' in your eyes," Gybzy says. "We all go through those moments and can identify with how they feel and think in the film. And that was a load of fun to revisit."

In the film, Gybzy's character Tip and Tee live on their own, leading to the younger brother becoming overly protective of his sister and jealous when suitors come calling.

"Tip's unlucky in love and has had her heart broken too many times and her troubled personal life is one of the reasons Tee misbehaves," she says.

Tee's misbehaviour at school leads to a romantic entanglement for Tip.

"In one scene, Tee gets in trouble at school and Tip has to meet his teacher, Mr Saneeh, played by Boriboon "Tak" Janruang, who falls for her and starts flirting. But she's already dating Kett, played by Nitith "Boat" Warayanont, so a love triangle develops."

The film is Gybzy's fifth, and she found the role of Tip to be a rich one.

"Tip is not a courteous person; she's quite brave and brazen," she said, noting that the character was also a conflicted one. "She is very emotional but at the same time she suppresses her feelings."

Gybzy says she found some similarities between the character and herself.

"I think I'm brazen just like her, which is why the role came naturally for me and Madeaw said I looked just the way he wanted the character to," she says. "But I have a different way of thinking and lifestyle than Tip."

How did you become involved in 'Grean Fictions'?

RS, my record label, contacted me and said they had a film for me and that Madeaw was directing. They wanted me to discuss the script with him, so I met him liked what I heard. I've long followed Madeaw's career and enjoyed his work. He may not have been in the movie business for long, but his films such as Home and The Love of Siam are popular and show his talent.

How did you prepare for the film?

While I read the script, I don't really like to decide on how I'm going to play a role in advance. If I do that, I might create a picture in my head that doesn't conform to the vision of others. I prefer a natural performance, which I believe happens on set when actors follow the director's orders and are in synch with everyone else.

What was the most difficult part of shooting?

The train scene. This is a movie for teenagers but we wanted a documentary feel. We ate, slept and worked on a third-class train. All of the actors and crew members were dedicated to pulling that scene off. When we passed through the Khun Tan tunnel, it was so dark! But when the train got out of there, it was so bright and beautiful.

How were your co-stars to work with?

Let's start with Boat. I enjoy working with him but the problem is his height _ he's more than a foot taller than me! We had some problems in certain scenes. One of the first scenes we shot was a kissing scene. I had just met him and we needed to kiss like 10 times, but I wasn't too shy to do it because I'm able to distinguish work from other things.

Working with Tak Boriboon was tiring. He's a funny guy and he acted like comedians do. Each take would be different from the one before and so I couldn't stop laughing while we were shooting. During some scenes, I just stood there and laughed and the cameraman didn't stop shooting. But the good thing about that is it looks natural. Tak always makes other actors laugh. He's crazy and super dedicated.

I'm so glad I had the opportunity to work with him. His past films have been so good that I was eager for the opportunity and accepted the offer quickly. Working with him was so relaxing, even though he's so meticulous. He didn't put pressure on me and had his heart in the film the entire way. I was so impressed by him.

What do you think audiences will take away from the film?

This movie has many themes that reflect modern society: family life, various kinds of relationships, youth issues. The movie takes a humorous and at times dramatic look at these themes to better understand young people. 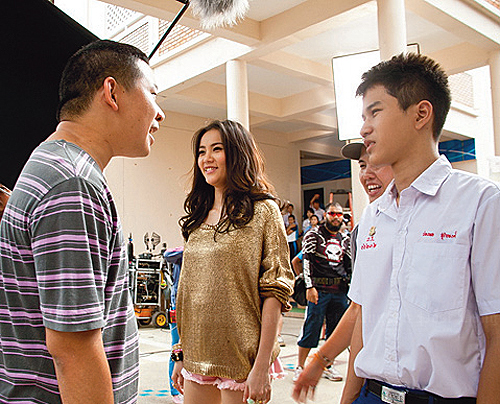