Where the streets have strange names
Life
Social & Lifestyle

Where the streets have strange names

When it comes to navigating your way through the capital's avenues, an online translation service might prove a useful companion to a map service

'Has your partner had sex with anybody other than you recently?" 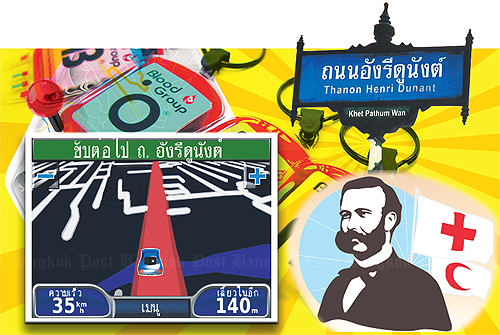 I am standing at the Red Cross blood donation centre on Henri Dunant Road, pen in hand, ticking boxes that require yes/no answers and feeling more violated than any needle jabbing me for blood ever could make me feel.

Just kidding. I kind of enjoy the fact I have to answer such a question on busy Henri Dunant Road, or Thanon Henri Dunant, as we locals like to call it when we show off.

This is the mandatory form one fills out prior to donating. It also asks less difficult questions; if I've had any piercings lately (no), if I have eaten anything fatty in the last six hours (not really) and have I had any cosmetic surgery (why should I?).

It's a crazy day at the blood bank; a public holiday and thus every man and his unpierced dog is here. Every time I donate I am confounded by one question, and it has nothing to do with my partner's clandestine trysts.

Who the heck was Henri Dunant and why is there a street named after him?

No offence to any living relatives, but I've never seen this name referenced in Siamese history. There have been foreigners who made their mark here _ Phaulkon, Feroci, Bradley, Trink _ so where does Bangkok get off naming an inner city road after a no-name?

Thai street names are generally the domain of kings; all the nine kings of the Chakri dynasty are well-represented on the capital's carriageways and bridges.

The rest are comprised of words with regal connotations. Ratchadamnoen is Royal Walk, for example.

In fact, all those roads starting or ending with rat (rhymes with cart, not cat) are royal words: Ratchadaphisek, Ratchawithi, Ratchadamri and Maha Rat.

This sometimes can get a little awkward, such as Boromratchonnanee Road over in Pin Klao.

There used to be English morning traffic updates on Bangkok radio; pity the poor expat disc jockeys who had to talk about congestion on that road.

It's only when you insert hyphens Borom-rat-chonn-a-nee that one is able to begin to pronounce it, but hyphens have no place in the Thai language.

Nor should farang. And yet there in the midst of this lofty regality, Henri Dunant stands.

When I first came to Thailand I assumed he was some kind of influential farang from early Bangkok days. A missionary, perhaps, or a fugitive who made good here. Bangkok is a haven for men desperate to insert thousands of kilometres between themselves and homeland indiscretions.

I even thought he was an ancient Hollywood actor until I realised I was confusing Henri Dunant with Jimmy Durante. I also assumed Henri Dunant to be a philanderer of some sorts. Why would I think like that?

Worse, this street name is not a translation from Thai. In Thai it is also Henri Dunant. But like so many other names _ Ikea, Bata, Volvo _ its pronunciation has been violated and contorted.

In Thai, Henri sounds like "hungry" without the H, while Dunant is Doo-nung, rhyming with cow dung.

I once tried to ask a female bus conductor where Thanon Henry Dunant was in my best Australian accent, and she shot back with a quick: "Fung mai roo reuang." (I have no idea what you are saying) before walking off, clacking her steel money cylinder.

Stupid me. If only I had said "Ung-ree-doo-nung", carefully ensuring it rhymed with cow dung, and she would have pointed me in the right direction.

If Henri Dunant Road is confusing, what about Witthayu?

The American embassy is situated on Witthayu Road. Witthayu _ what a nice sounding word, not to mention short and to the point.

The word means "radio" in English and for a century it was translated into English for reasons known only to the Lord Buddha Himself. It would be logical to assume that it could be translated as Radio Road.

As any long-term resident will assure you, anyone who starts a sentence about Thailand with "It would be logical to assume ..." has to end up overdosing in a sordid Pattaya apartment or catching the next flight home, homeland indiscretion or no homeland indiscretion. It is Wireless Road.

Why translate it into English in the first place? Does this mean I am free to refer to Silom Road as "Converging Winds Road"? May I instruct tuk-tuks to take me to Rice Road when I feel the urge to drink fruitshakes and mingle with Khao San backpackers?

And anyway _ why Wireless? Does our younger generation even know what a wireless is? This is the generation that has no idea how to dial a telephone number with a pencil.

Even more fascinating is New Road, which is actually Charoen Krung Road, which means City Development, which would sound hideous as an English street name, which explains why it is referred to in English as something completely unrelated to its Thai meaning.

Why would you call it New Road? Because that's what it was when it was built, and expats at the time began referring to it as that, and the name stuck.

This plays terrible havoc with my sensibilities.

Isn't any road a new road when it is first constructed? They built a new superhighway behind my house here in leafy Samut Prakan.

Can I call that New Superhighway rather than its regal, official Kanchanaphisek Road? Surely I wasn't the only one in my upper middle-class housing village referring to it as new. Why hasn't the moniker stuck?

There is even more irony lurking backstage. Did you know New Road was the first road to be built in Bangkok?

Some 150 years ago the main transport in Bangkok was via canal, until in the reign of King Mongkut the very first road was built.

In these modern times such English street names are fading. Wireless is not so popular any more, and New Road has reverted back to Charoen Krung since 150 years ago is not considered new unless you're Carl Sagan or Stephen Hawking.

Yet Mr Dunant remains as strong as ever. He stands where lesser roads with foreign names have fallen, hands on hips, towering over Bangkok.

So who was he?

It turns out it is not sheer coincidence that the Red Cross is situated on this road. Jean Henri Dunant invented the Red Cross!

He was a Swiss businessman who thought up the Red Cross after witnessing war in 1859, coincidentally one year before New Road was constructed. His biography is fascinating; after inventing the Red Cross and scaling the great heights of European society he went bankrupt, becoming a homeless destitute, before being honoured with the first-ever Nobel Peace Prize towards the end of his life.

Despite never having travelled to Siam, Khun Henri has a street named after him. Hey, I'm not jealous. Though I will say this; in these modern, patriotic times it is too much for a foreign-sounding name to occupy such a grand road in the middle of Bangkok.

I give it 10 years. Before we know it we'll be donating blood on Thanon Somtam, or Rue de Shinawatra. Just you watch.

In the meantime, as I stand here at the Red Cross with pen in hand, I must attend to more pressing details, such as whether my partner has had sex with anybody other than me. No wonder I associated Khun Henri with infidelity.