K-Pop confidential: Super fans and the craze that consumes them
Life
Social & Lifestyle

K-Pop confidential: Super fans and the craze that consumes them

'Tings', Thai supporters of South Korean popular culture, are derided as frivolous by some and borderline stalkers by others. But a meeting of one fan club attended by 'Brunch' reveals a diverse group who say they're in it for the love

Somewhere between super fan and stalker lie "tings", the growing army of Thais whose love of all things South Korean goes far beyond the ability to dance Gangnam Style. 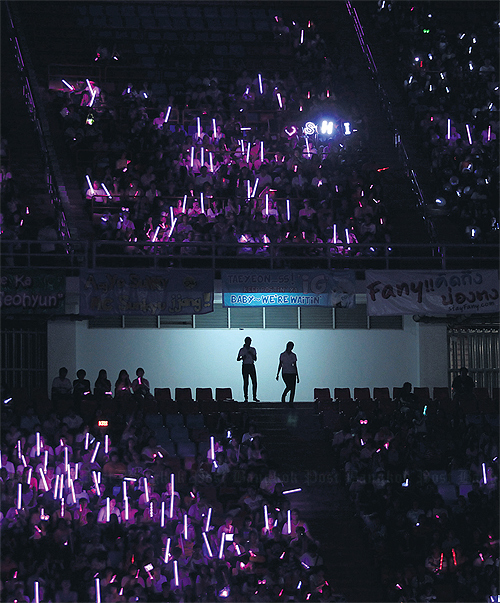 Take Noi, a 24-year-old college student. Her favourite K-Pop band, Girls' Generation didn't include Thailand on a recent concert tour, so Noi decided to get creative.

Drawing on savings, she arranged her "own Asia tour", travelling to each of the band's concert stops. But being a truly dedicated ting, she didn't stop there.

"I made it a point to be on the same plane with the artists to make sure they had a safe flight," Noi says.

While such shows of devotion could prove too costly for many, there is no questioning the popularity of K-Pop culture in Thailand. In 2011, tickets for a Girls' Generation concert in Bangkok sold out in 20 minutes, breaking the record for the fastest concert to sell out in the Kingdom.

And tings fuel K-Pop's might in Thailand _ Sone (pronounced so-won), the fan club for Girls' Generation, has more than 77,000 members and other groups boast similar numbers.

Most tings are high school and college students, but as Brunch found out at a fan club meeting for Girls' Generation, the South Korean fixation knows no limits when it comes to age.

Among the young people at the ting meet were a doctor, a veterinarian, a dentist, office workers and others _ men and women (though mostly the latter) _ brought together by a shared fixation, or as they would call it, love.

SO, WHAT IS THIS TING THING?

Before there was any K-Pop connection, "ting" was the word used to refer to what used to be the regulation haircuts that girls in high school had to have, no longer than the earlobe ("ting is short for "ting hu", or earlobe). 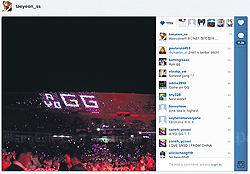 CLICKED WITH HER: A Girls’ Generation member posts a pic of the Thai display on her Facebook page.

When K-Pop first took off in Thailand, the majority of those who came out to shriek at the singers were high school girls, who were dubbed "ting Kaw-ree [Korean]". The abbreviated ting now refers to anyone who loves South Korean pop culture, including TV shows and movies, though mainly K-Pop.

Music from South Korea has long been popular in Thailand; Rain, for example, has been unloading albums in the tens of thousands and selling out concert venues here for more than a decade.

Whereas songs by Rain and his contemporaries were hugely popular in Thailand, singing along proved difficult for Thai fans. Not so with Nobody, which was the first to crystalise what has become K-Pop's formula for success: a catchy chorus, dance moves that are easy to mimic and a sophisticated marketing effort online and off to get the word out and bring fans together.

That song became the first South Korean song to enter Billboard's Top 100 and K-Pop successes have come fast and frequent ever since. A sampling: Girls' Generation's I Got a Boy, Super Junior's Sorry Sorry, 2NE1's I Am the Best, K Will's My Heart is Beating and Sistar19's Ma Boy. And, as a peek at most screens at Bangkok internet shops would reveal, the hits are still coming.

A massive online network underpins the ting movement in Thailand. Tings communicate through online portals to watch multimedia content (music, videos and TV programmes with Thai subtitles), get information on fan club projects and keep up with the latest news on their favourite acts.

All major K-Pop artists have their own official fan clubs in Thailand, the names of which must be approved by the respective record labels. In addition to Sone, the fan club for Girls' Generation, there is Play Girlz' Afterschool, Elf's Super Junior, Hottest's 2PM, and Primadonna's FT Island.

Of course, concert tour information is the most highly prized among tings and even a rumour of a possible stop in Thailand can set fans into action.

From the moment a possible Thai stop is mooted, tings begin putting aside cash to guarantee the best spot. Concert ticket prices vary from 900 to 6,000 baht.

Paying top price gives tings a chance to get a poster autographed and to shake hands with each band member.

Those who can't afford these prices will exhaust every possible ticket giveaway avenue they can find, another hot topic on web forums.

For truly hard-core tings, the full K-Pop concert experience begins two days prior to the show _ at the airport.

Competing with iPhone fans in the dedication department, the tings stake out prime property at Suvarnabhumi and await, banners to unfurl at the ready, for their heroes to disembark.

BROADCAST AWAY: A Thai K-pop fan appears on a new broadcast covering the Korean Music Wave festival held in Bangkok in March.

''I bring my homework with me and sometimes I also prepare for a mid-term exam while I wait,'' said New, a 19-year-old college student.

When an entire group is involved rather than a solo artist, the wait at the airport can be even longer, as tings hang around until all members are accounted for.

Once they've arrived, the fans will greet them with a welcome gift decided on beforehand by the fan club involved.

And the artists themselves appreciate the gifts they receive. ''Often they thank us during the concert,'' one ting said. ''We've seen our gifts in their condos when they're interviewed on TV.''

A singer who comes to Bangkok and hopes to stay a few days can abandon any hope of maintaining a low profile.

Tings quickly find out where they are and what they're doing and share the information on their extensive social networks. Some will approach the stars in public and seek out autographs, even going so far as to charter buses to follow them upcountry.

While some might suggest this checks all the boxes for the definition of stalker, the fan clubs are sanctioned and encouraged by the record labels through interactive promotions.

''The record labels love tings because they know that we're supporting the artists by shunning pirated goods and buying licensed products,'' said another college student at the club gathering.

Once at the concerts, tings show their devotion in ways that are becoming more advanced. At the fan club meeting attended by Brunch fans were putting the finishing touches on an LED light board for a Girls' Generation concert.

The project involved hours of what could be seen by non-tings as tedious work _ inserting LED lights and welding together wires for hours on end before finally reaching completion and testing the final product.

''When we join forces to make a project come true, anything can happen since the project requires not only money but discipline and love,'' one of the young women working on the light board said. ''We do this to tell the artists that we're here and will always support you.''

The result was held up at the concert. The band showed their appreciation for the effort by featuring the board on their official Facebook page _ a ting dream come true. COSTS OF K-POP CRAZEBie, a 33-year-old accounting manager, has been a ting since 2004, but she did not enter the extreme levels of the craze until 2007 when Girls' Generation was taking off.

She founded a website for the band after its debut and for one year bought everything she could get her hands on related to the band.

''Then I simply couldn't afford it anymore since there is so much stuff out there,'' Bie says. '' Since their debut until today, I've spent around 100,000 baht on the band, which includes postcards, posters, CDs, DVDs, photo books as well as airfare, hotels and even vitamins they've promoted.''

Such spending has led to the term ting having negative connotations among members of the public. Ting are seen by many as frivolous in their endless devotion and willingness to throw away thousands of baht in support of their K-Pop heroes. The keyboard wars they initiate to protect their idols don't enhance their image either.

The tings Brunch spoke to rejected these criticisms and say that for them true devotion is at the heart of all they do. ''I do this because I choose to and love is the reason why. You may love cars, so you collect them; or Man U, so you buy a ticket to Old Trafford; or iPhones, so you wait in line for hours on launch day. But why does nobody call these people crazy?,'' said one college-aged ting. ''Yes, some are extreme, but it is because of love. Some true fans just can't control themselves.''

As for criticisms that tings take appreciation for an artist's music too far by staking out airports and distributing information about itineraries, the tings again say it's about love, not an unhealthy fixation.

''There's nothing crazy about waiting at the airport,'' said Mai, 22, one club member and a senior university student. ''If your sister arrives at the airport after a year studying abroad, wouldn't you be there to pick her up?

''We love our stars as family members.''

The K-Pop subculture in Thailand has also come under fire from those who say it leads to self-esteem issues among young people, especially those with darker skin.

As for any negative social repercussions of their love for K-Pop, the tings Brunch spoke with said that the opposite is true _ that ting life has broadened their social circles and given them the opportunity to do good works in the community.

Ting gatherings take place regardless of whether a concert is upcoming and the groups do not only dish on their favourite bands _ they also do things like donate blood, collect money for the poor or hold sports day events with proceeds going to charity.

Hero worship may link them together, they say, but friendship is what matters.

And along with whatever mid-term cramming you can get done while waiting for your favourite K-Pop stars to land at Suvarnabhumi, another ting at the meeting, Tong, 23, said her obsession has had an unexpected upside.

''I wanted to know the meaning of K-Pop lyrics, so I began studying the language,'' Tong says. ''I took the test of proficiency in Korean and scored so high I got a scholarship from the South Korean government and am now a grad student there.'' 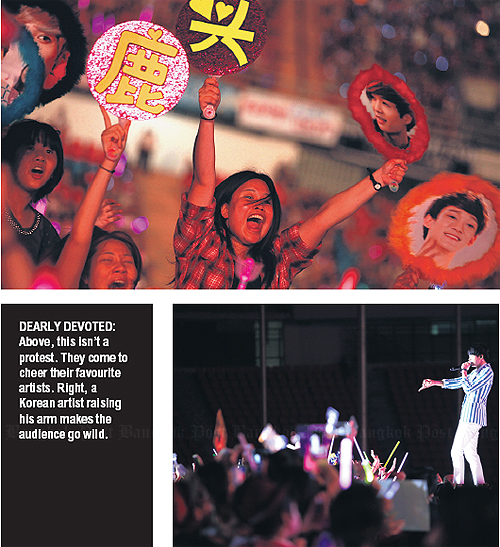 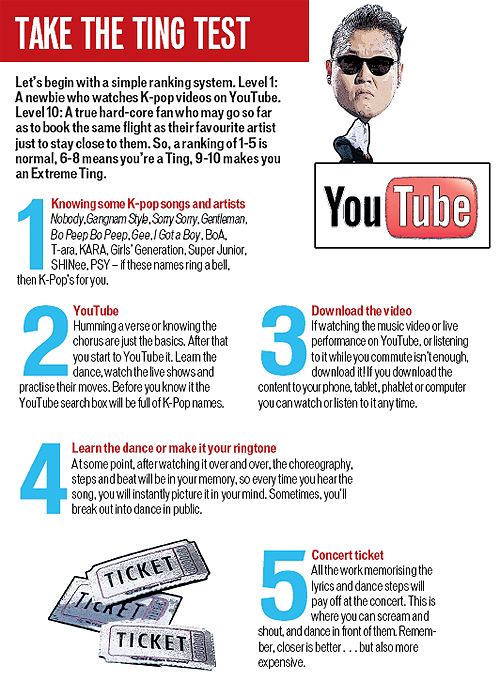 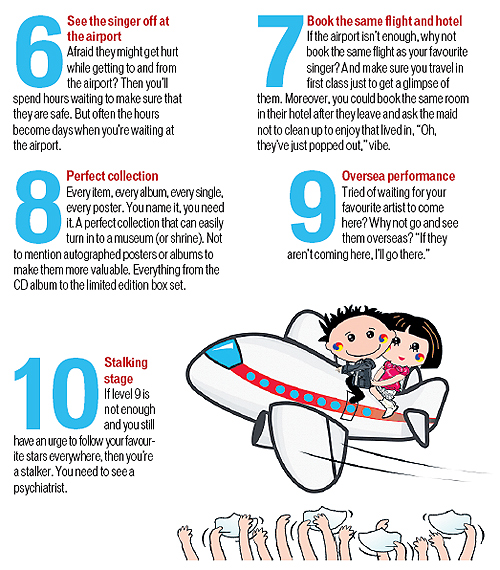 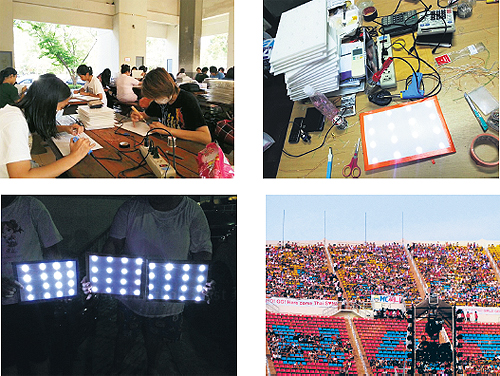 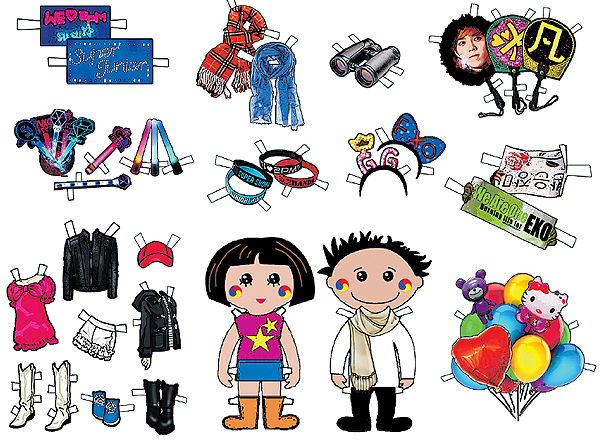 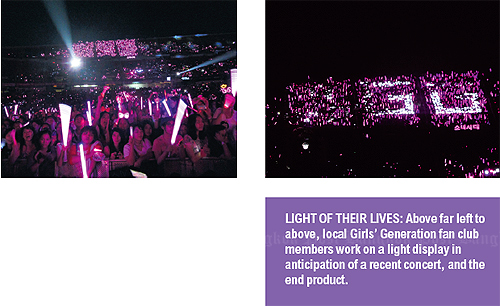 GIRLS-POWERED: Die-hard fans of Girls’ Generation copy the band’s costumes from their latest album ‘I Got A Boy’ as they head for a concert by the stars. Right, members of EXOMoffer wais to thank their Thai fans at their latest concert in Bangkok.