Chinn's up in the kitchen
Life
Social & Lifestyle

Chinn's up in the kitchen

Ask Bobby Chinn to introduce himself and the answer, fired off in a single breath, is: "I'm half-Egyptian, half-Chinese. Born in New Zealand. Educated in England. From San Francisco. Have been living in Vietnam for the last 18 years." A pause, then the punch: "Oh, and I was conceived in Thailand." 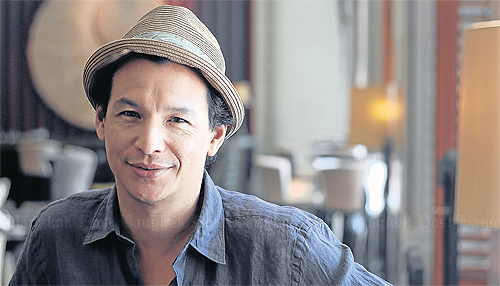 Bobby Chinn has cooked for presidents and rock stars, and he’s coming to TV in Thailand.

Chinn is the chef and presenter of the World Cafe TV series, which will premiere on June 12 at 9pm on TLC Channel D33 on True Visions. But the 49-year-old's path to becoming a celebrity chef was an unconventional one.

Noting a similarity to Vincent van Gogh, who was a late-bloomer in art, Chinn said he was already 30 years old when he turned his talents to pots and pans. His early years of adulthood were spent working on Wall Street and later as a stand-up comedian, so it came as quite a surprise, especially for his family, that he turned out to be an ace in the kitchen. More than that, he has since become famous as a TV presenter and the owner of two restaurants in Vietnam _ he even cooked for former US president Bill Clinton and music legend Bob Dylan when the American singer performed there.

Unlike other cooking shows, he said World Cafe is not only about food but also about the culture and history of the places he visits.

What is it about cooking that fascinates you?

I think I like this idea of this person who mixes all the stuff and turns it into food. I was fascinated by that. I grew up in the generation of Julia Child and Gram Kerr's Galloping Gourmet. Actually, cooking had always been around me but I didn't really pay that much attention. But then I started working and saw how the chefs worked with the ingredients and created food. I started to appreciate good food, whereas before that, food was just food.

My grandmother was a huge inspiration to me. She encouraged me to continue when I wanted to give up. Everyone in my family can cook. My dad is really good at barbecuing. My mother is a creative kind of cook. My sister is really good at giving orders; she would have made a good chef.

How have your experiences of working in finance and as a comedian benefitted your current profession?

I think whatever you do, whether you like it or not, you learn something from it. You take this knowledge which you don't recognise and you eventually apply it to whatever you do. Working on Wall Street taught me how to speak quickly and how to deal with chaotic situations. As for being a comedian, I think it's also very useful because I can use my training in improvisational comedy to connect to the TV audience with laughter.

How did you begin your professional career as a chef?

I worked with Hubert Keller at Fleur de Lys [in San Francisco]. He is a great French chef who was brought in by Bill Clinton to lighten the menu in the White House. I begged him for a job and worked for free as a pantry person. Then I went on to help other cooks because I wanted to learn how to work in a very well managed kitchen. Hubert Keller imparted that sense of a very professional environment to whoever walked through his kitchen.

What made you decide to move to Vietnam and what was the experience there like?

I thought Vietnamese food was going to be the new food, the future. The food is very modern, sustainable, and healthy. It's easy to make and it's uniquely different from other Southeast Asian cuisine. I went to a bookstore and there were only one or two Vietnamese cookbooks, so I moved to Vietnam to learn it. In those old days, I didn't have the money to have a decent kitchen, and I learned how to cook with very little. It took me four or five years before I opened my own restaurant.

Who are some of the notable people you have cooked for?

I cooked Indian food for Bill Clinton. For Hillary Clinton, I made a bunch of small bites.

When Bob Dylan was doing his concert in Saigon about two years ago, I flew from Hanoi to cook for him. I cooked for the band and they loved it. After cooking for the band, I was ordered to make chicken noodle soup. At first I refused but eventually I had to make it. It was only later that I realised that Dylan didn't eat with the band and was the one who requested the chicken noodle soup. He ate it all in the end. He was kind of weird. You don't get to talk to him, look at him or shake his hand.

What's the challenge of being a TV presenter?

The problem is you have been educated to stay focused when cooking. Your focus should only be on what you are doing and that's why chefs usually don't talk. It's not that you can't talk but all the good restaurants I have worked in are always silent.

On a personal note, what do you do in your free time to unwind?

I listen to music and play guitar. I love Van Morrison, The Rolling Stones, The Beatles. I also love the blues, Albert Collins, B.B. King. I used to have a band and played at a jazz club but I stopped because I got so busy. I like playing chess, reading and writing. I also like having a massage too.