Traffic congestion in Bangkok can drive people to jump on their bicycles instead of in their cars, and the increasing number of cyclists also gives way to related businesses _ bicycle shops, clothing and accessories stores catering to bike riders, and magazines dedicated to biking. 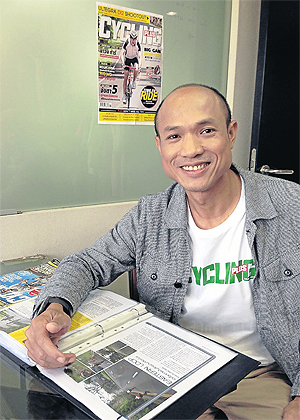 Cycling Plus, a famous bicycle magazine from the UK published by Post International Media, will be officially launched in Thailand this week.

You were a news reporter, environmental campaigner and a writer on health issues, travel, the environment and even yoga. What led you to this editing job?

My resume is quite diverse because my interests are expansive. Yet my passion remains the same... the environment, health and media have always been my turf in terms of my profession.

When Post International Media came up with this original and challenging project _ Cycling Plus magazine in Thailand _ I said yes even though I had to do some soul searching.

Cycling Plus is famous and respected in the UK for its in-depth features on sportive cycling. But it is not the type of magazine that I had planned to do and I was not certain I could handle that type of content despite [the fact] I have been using bicycles since I was a teenager and have collected many. But Post International Media decided to make this magazine a sportive and lifestyle magazine, which is the same direction for me. So, I took the job.

What can readers expect from Cycling Plus, apart from learning about bicycles and their prices?

Cycling Plus Thailand will retain the character and core features of the original UK version, especially on reviews of new and major bicycles and accessories, features on cycling, knowledge of competitions, and cycling tips from professional cyclists. 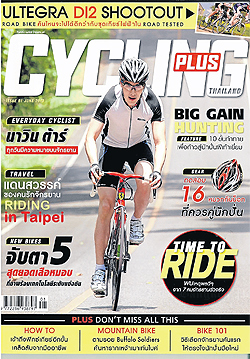 Yet the types of bicycles in the magazine will have to be different. In the UK, content focuses on road bikes and racing bikes, but the Thai version is for Thai readers, so feature stories and reviews will focus on bicycles popular here, such as mountain bikes and fixed gears, city bikes and folding bikes. The content must be relevant to our readers.

Cycling Plus Thailand will be unique. We do not just translate content from English into Thai. We create our own content. Readers will be updated on current issues such as the riders' community in Thailand, social bicycle activities and the interview section or travel column. For our first edition, we are using celebrity and recreational cyclist Navin Yavapolkul (Navin Tar) as the model for the cover, and features on street wear with bicycles.

The Thai version will be a mixture of sport and lifestyle stories, because we look at cycling from a different perspective _ not from a pure sportive purpose.

Cycling is part of our daily lives, more people are using bicycles to travel to work, and it has become what family members or friends do together. Because of the bad traffic conditions in Bangkok and big cities, all cyclists have to have skills to use their bicycles for better safety and more fun.

So, Thai readers will get the "plus" of Cycling Plus Thailand _ more so than the UK version.

Can you give us your take on the rising popularity of bicycle riding in Bangkok and Thailand?

I don't have the official figures on the rise of bicycle users, but every day we find more people using bicycles to get to work, and carrying their folding bikes to the BTS or MRT every morning. Bicycles have become good friends of urban residents. These friends help save the environment and make us healthier, not to mention helping us save more money.

Is bicycle riding in Thailand a lifestyle?

Yes, bicycle riding in Thailand is a lifestyle, but if this lifestyle gains momentum, it will become a major shift for many Bangkok residents who wish to ride bicycles but are afraid of traffic accidents.

Whether it is a trend or merely a lifestyle, the truth remains the same: The more we start using bicycles, the better the air quality and living conditions will be in the city.

You don't have to find a 100,000 baht bicycle or a carbon fibre state-of-the-art design road bike to use, but just any kind of bicycle that you are comfortable with. That is good enough!

How can you compete with online magazines or digital content, which are not only free, but more related to local readers?

We are just a newcomer compared to the digital-based cycling media, which existed in the cyber world long before us. But we would rather consider our magazine as a one-stop shop for all issues to do with bicycles, and for cyclists interested in issues in Thailand.