Beefing up on business

Many starry-eyed hopefuls ooh and aah at the accomplishments of Itthipat Peeradechapan, the young founder of the successful seaweed snack Tao Kae Noi. 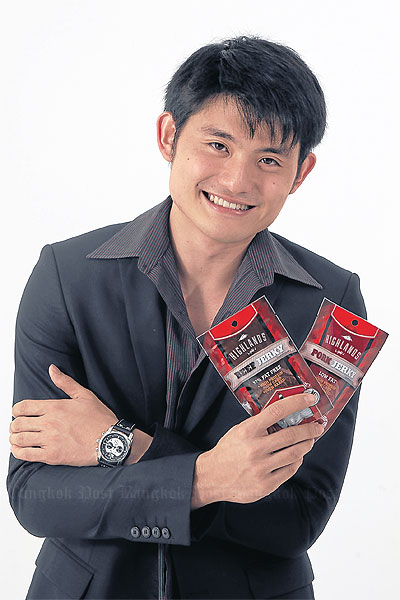 As Krit Sukawat walked out of the cinema after watching Wai Roon Pun Lan (The Billionaire) in 2011 _ a biopic about Itthipat and his success story _ the 23-year-old shrugged off what he had just seen because he felt confident that it was something that he could also achieve himself.

And he finally has _ the product part at least; the billionaire part is still in the works. Diving in head-first in the same direction as the seaweed tycoon, Krit set out to create a beef jerky empire in Thailand before he even graduated.

After three rough years of dealing with working in a stifling, oven-hot room and infinite trials perfecting the recipe (in that same room), today you can find Highlands Jerky at Foodland and Villa Market.

Possessing a muscular and burly build, Krit also has the confident _ if not borderline cocky _ swagger to match his appearance. And what a handy trait it is that all entrepreneurs could use, because we all know how hard it is to stay optimistic (and sane) in the challenging arena of business start-ups. After all, this is someone who started a T-shirt company when he was 19, tried to make money from extracting blood from horseshoe crabs in his third year at university (that's another story) and finally hit a home run in bringing beef and pork jerky to the Thai market.

In a chat with Life, the young CEO shares how gambling a year and a half in business after graduation turned out and fills us in on the wonders of American-style beef jerky.

Why did you start this business?

I was the coach for Chulalongkorn University's rowing team and when we train, we had to go to distant locations where the lakes are. There was not much to eat there and I was thinking about what kind of food I could bring to the training areas so my team could eat healthy, not snacking on chips and soda.

Then I saw these bags of jerky on the floor of my apartment, which my cousin got for me from the US. It was running out, so I thought: "Fine, I'll make my own, how hard could it be anyway? It's just dried beef." It turned out harder than I thought and it took me 300 to 400 trials before I got the recipe right. If you asked me if I would do it again, I probably would not.

Have you ever compared yourself to Tob Peeradechapan, owner of Tao Kae Noi?

The idea to start a beef jerky business came right around the time The Billionaire was showing. The reason I thought I could do something like him is because there was a scene when Tob needed to figure out how to extend the shelf life of the seaweed or else it would get soft because it's a fried food. So he walks up to some professor in Kaset and asks for help. And everyone in the cinema during that scene was like "Wow" and so amazed that he actually walked up to some random person to ask for help. I'm just sitting there thinking how people think it's such a big deal but it's what I do all the time. I walked into the fishery department in Chula and just asked if someone could teach me how to extract blood from horseshoe crabs to make limulus amebocyte lysate. Just like that.

How is jerky different from nuea dad diaw?

Lots of people wonder why they should eat jerky when they can just go to the market to eat nuea dad diew. Nuea dad diew is raw beef that's seasoned with soy sauce and salt and dried in the sun for a few hours. Then you cut it up and fry it. It's a fried food you eat with rice so it's quite high in fat. But for jerky, it has to be lean meat because if it isn't, it can't stay in the package a long time and becomes rancid because of oxidation. It's first cured with salt and flavourings, just like Parma ham where you rub salt on it and keep it for six months. Jerky is like that too, then you need to dry, smoke and oven-cook it because it helps with the preservation. When all that is done, it can keep from six months to two years. With all that process that jerky goes through, it explains its high price. It can be in your room, car or back pocket. Jerky is handy when you're hungry anywhere and want something healthy.

Where did it originate from?

There's jerky everywhere because it's basically dried meat, but we based ours on American jerky, because they really package it as a snack and process it to have a long shelf life. Besides the US, American jerky is popular in New Zealand, Australia and parts of Europe where people tend to eat a lot of meat and have a higher purchasing power.

Jerky was made by Africans, Native Americans and Egyptians long before refrigeration when you couldn't keep meat in its fresh state. Meat needs to be cured and dried somehow and our technique comes from the Native Americans, nomads who followed the animals they hunted. When the Europeans came, they took this technique and used it on deer and bison and they used that as their main source of nutrition while they explored America.

How does jerky fare in the Thai market?

There are many people who don't eat beef, so we developed pork jerky too. They can understand it more because it's sweeter and tastes a bit like khun chiang [Thai sausage]. We want to experiment with lots of other flavours such as teriyaki and tom yang gung, as well as turkey meat, as some people prefer white meat because they feel it's healthier. We also hope people don't confuse it with jerky for dogs, which actually has a lot of flour in it. If you hold our jerky, which is purely meat, against the light, it will shine red and is not opaque like the jerky made for dogs.

How has running your own business been?

I started it before I graduated from Chula and hoped it would be selling by the time I graduated, but it didn't work out that way. I feel this is more challenging [than an office job] and you learn a lot of stuff because you need to find your own direction because there's no one to tell you how.

What were your greatest struggles with this business?

First was getting the recipe right because it's really hard to find substitutes for ingredients that are only available in the US and it's also hard to work with an oven where you can't completely control the humidity to ensure equal heat exposure for every single piece of meat.

Losing friends sucks too. Some guys are your friends but they don't have self discipline, nor the fire to keep going when everything looks really bleak.

Last was building the factory, where we cleaned and fixed up an old house with our own hands because we couldn't afford to hire constructors.

What I feel right now and three months ago are completely different because back then I was still struggling. But now I feel pretty good because our product is in the stores. It's finally working out.